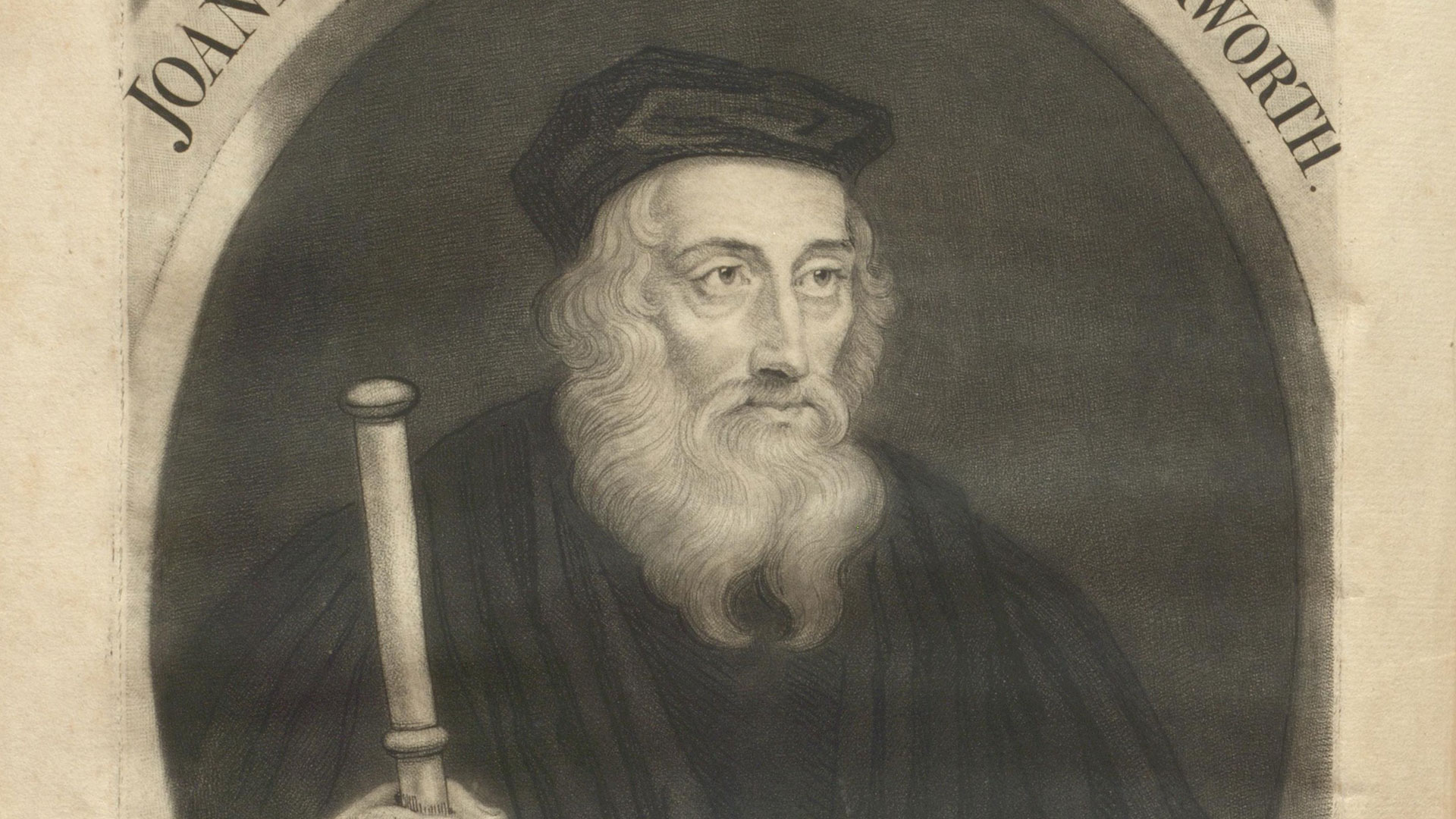 John Wycliffe was one of those exceptional individuals who seem to have been born before their time. A brilliant and courageous cleric and scholar, he became known as “the morning star of the Reformation.”

Wycliffe is mainly remembered for producing the first Bible in English, though recent scholarship suggests that he was not the actual translator but rather the inspiration and figurehead for that dangerous and secretive undertaking. Mystery still surrounds the sudden appearance of numerous hand-copied Bibles among a population who previously had been held in scriptural illiteracy by a church jealous of its influence, power, wealth and privileges.

Most authorities cite 1324 as the date of Wycliffe’s birth. He was born in Yorkshire, England, but little is known about his life before he entered Oxford. Wycliffe became a fellow of Merton College and, in about 1360, Master of Balliol College. By this time he had a reputation as an outstanding theologian and philosopher at the university and was a principal speaker at theological debates. In 1361 he was appointed vicar of the parish of Fillingham and later rector of Lutterworth.

Remarkably for his day, Wycliffe regarded the Bible as a living and authoritative book. He saw and commented on the many discrepancies between the standards set by Scripture and the practices of the church. He gave a series of discourses on the whole Bible—something that was entirely new and revolutionary. He declared the Bible to be the highest authority for every Christian, and the standard of faith and human perfection.

Noting that the Bible said the gospel was to be given freely, Wycliffe attacked the money-grabbing and impoverishing practices of the medieval church. He criticized such unscriptural practices as prayers to saints, pilgrimages and the selling of indulgences. He also condemned confessions, images and celibacy. Decrying the feudal power of the church, he held that each person was directly responsible to God.

During this period, tensions between Rome and the English King Edward III were escalating. In 1374 Wycliffe was appointed to a royal commission created to resolve a number of the issues that had arisen. Many of the bishops on the commission accepted bribes of lucrative jobs, however, and the body failed in its role. Wycliffe, on the other hand, refused to be bribed. This gained him favor with parliament and the king’s fourth son, John of Gaunt, though not with the bishops.

In 1376 Wycliffe wrote On Civil Dominion, in which he said, “England belongs to no pope. The pope is but a man, subject to sin; but Christ is the Lord of lords, and this kingdom is held directly and solely of Christ alone.”

The treatise resulted in his being called to answer charges before a group of bishops at St. Paul’s Cathedral. He arrived in the company of two very powerful supporters: the marshal of England, Lord Percy, and John of Gaunt, who was administering the kingdom during Edward III’s terminal illness. When Percy presumed to tell Wycliffe he could be seated rather than stand during the proceedings, the bishops were so enraged that a riot broke out, disrupting the trial, and Wycliffe and his party escaped unharmed.

In 1378, shortly after the death of Edward III, Wycliffe wrote On the Truth of Holy Scripture, in which he stated his view that the Bible is without error and constitutes the ultimate authority in matters of doctrine.

That same year he was again summoned to appear on trial before the bishops. Shortly after the trial began, the proceedings were interrupted by the arrival of a message from the king’s widow asking that no verdict be brought against Wycliffe. The trial ended with the bishops simply telling him not to air his controversial opinions at the university or from the pulpit.

Three years later Wycliffe rejected the church’s teaching on transubstantiation in his treatise On the Eucharist, and he lost many of his supporters, including John of Gaunt. This was also the year of the Peasants’ Revolt, which Wycliffe was accused of inspiring. The following year a council of theologians decreed that his writings contained heresy, and parliament issued a bill condemning his teachings.

Perhaps because of his tremendous popularity, Wycliffe was not punished but allowed to retire to the rectory at Lutterworth. While there, he continued to write. He now spurned Latin, however, as the language used to hold his people in bondage, and began to write only in English. He believed that the common man should be able to read the Scriptures in his own language. Who actually penned the Wycliffe Bible is shrouded in some mystery, but two of Wycliffe’s followers, Nicholas Hereford and John Purvey, are the most likely candidates. The translation was made from Jerome’s Latin Vulgate rather than the original Greek and Hebrew, which were not well known in England at the time.

Wycliffe died from the effects of a stroke in 1384, but persecution of his followers continued. In 1401 a new law ordered that heretics be burned at the stake, and shortly afterward Archbishop Arundel declared that it was illegal even to read the English Bible. He decreed that no one should translate any part of the Bible into the English language nor read any of Wycliffe’s writings (or other writings of a similar nature), either publicly or privately. Anyone who defied these orders would be burned at the stake as a supporter of heresy.

Decades after his death, Wycliffe and his teachings were still perceived to be a threat by the church at Rome. Because he had escaped the prescribed punishment for heresy, he was tried a second time in 1415 and this time condemned. The Council of Constance ordered that his body be disinterred and burned. Pope Martin V approved the order, and the deed was carried out in 1428, approximately 44 years after Wycliffe’s death. His bones were burned in a field of execution and the ashes scattered in the River Swift near Lutterworth.

Wycliffe’s influence proved harder to destroy than his mortal remains.

Wycliffe’s influence proved harder to destroy than his mortal remains, however. The Word of God had been savored by many English people and, in spite of a grim century of suppression that was to follow, the stage had been set for the great work of translation from the original languages that would be undertaken by William Tyndale.