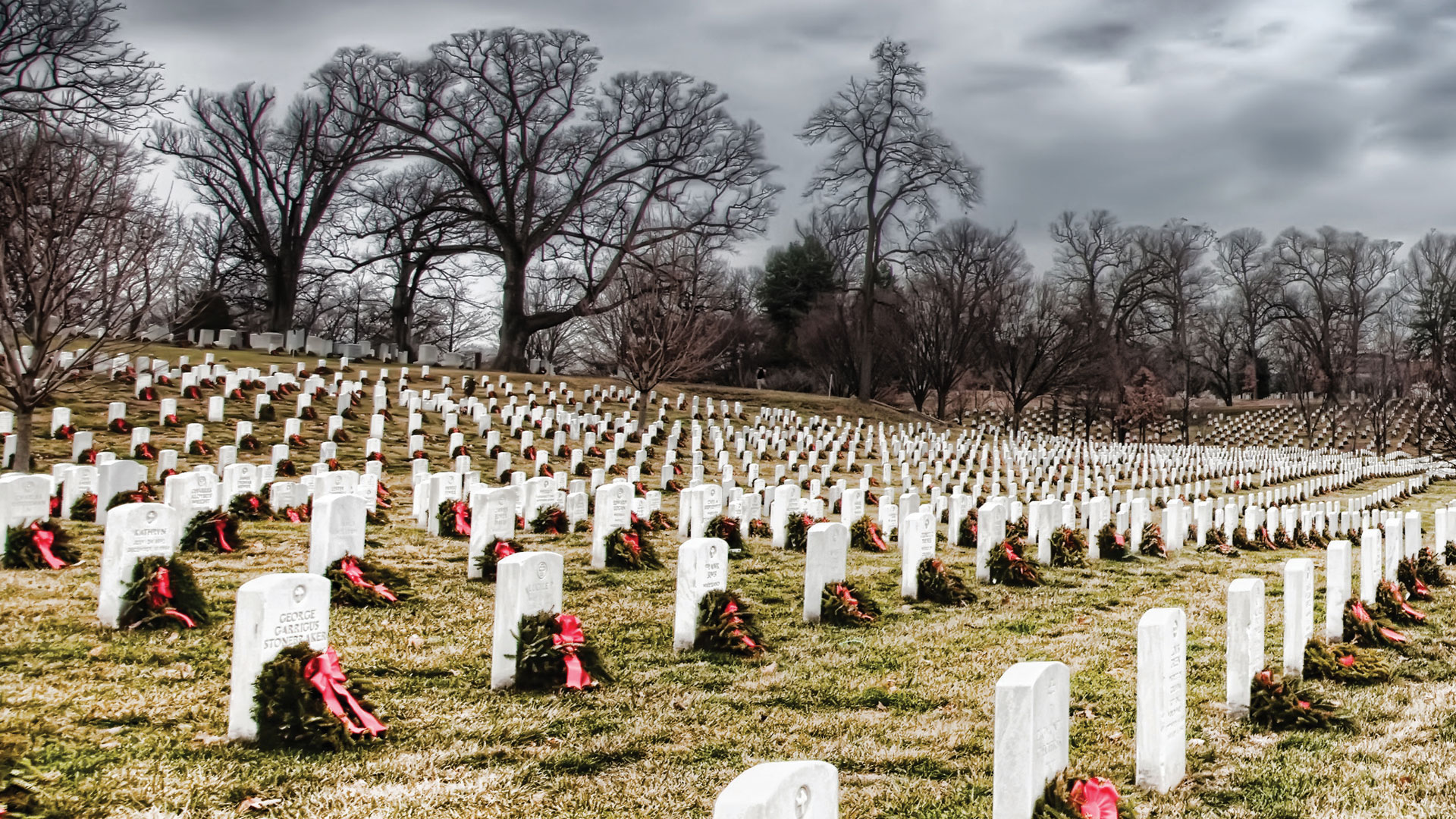 Whether it be printed on a greeting card or emblazoned on a sign outside a church, the proclamation of “peace on earth and goodwill to all” often comes to the fore around Christmas time. These few short words sum up for many the warm feeling that is synonymous with Christmas, conveying an implicit hope, a spirit of generosity and a kindly disposition toward others.

Another ubiquitous feature of the modern season of goodwill is the Christmas song, which often alludes to this universal seasonal sentiment. One British example is “I Believe in Father Christmas” by Greg Lake, released in the United Kingdom in 1975 and still frequently played. It begins: “They said there’ll be snow at Christmas, they said there’ll be peace on earth, but instead it just kept on raining a veil of tears for the Virgin birth.” Toward the end of the video that accompanied the original release are scenes from Vietnam showing the destructive force of war. People often remark on the jarring nature of these controversial scenes, which include shots of rocket fire and other heavy artillery raining destruction on the earth. Clearly there is an intentional disconnect between the peaceful-sounding music and the disturbing video.

If we lift our heads above the tinsel and trappings and take a cold, hard look at the world around us, the frequently used words of comfort and cheer seem hollow—a mere platitude. Where are the peace and goodwill so often alluded to? Unfortunately, armed conflict and interpersonal strife are ever present in our world.

The contrast between “peace and goodwill” and the reality of life can be clearly seen in the tale of Christmas Day 1914. Grainy black-and-white photos and firsthand accounts tell of the time during the First World War when soldiers left opposing trenches of the Frelinghien-Houplines sector on the western front and congregated in the no-man’s land between them. Numerous men along the front recorded that after exchanging stories and gifts, the mainly British and German soldiers even started games of football (soccer). This was, of course, a short-lived arrangement, and troops soon got back to the business at hand of trying to kill each other. Military historian Andrew Robertshaw told the BBC News in 2004, the 90th anniversary of the event, that such a truce would have been unthinkable a year later: “This was before the poisoned gas, before aerial bombardment. By the end of 1915 both sides were far too bitter for this to happen again.”

A similarly discordant vignette comes from the American Civil War. In 1863 Henry Wadsworth Longfellow wrote a poem titled “Christmas Bells” (later put to music and renamed “I Heard the Bells on Christmas Day”). It begins with the usual celebration of the season’s popular sentiment, but then the reality of the war sets in: “And in despair, I bowed my head; ‘There is no peace on earth,’ I said; ‘For hate is strong, and mocks the song of peace on earth, good-will to men.’”

The video for yet another Christmas song, “Stop the Cavalry” (1980) by British singer Jona Lewie, is set in the trenches of the First World War and is interspersed with stills of actual troops. Wishing that he was at home for Christmas, Lewie sings: “Hey, Mr. Churchill comes over here to say we’re doing splendidly. But it’s very cold out here in the snow, marching to win from the enemy. Oh, I say it’s tough, I have had enough. Can you stop the Cavalry?”

Sadly the cavalry has not stopped.

Centuries before Jesus was born, his birth was foreseen by the prophet Isaiah. In a section of the Bible often read in churches at Christmas, we find this proclamation: “For unto us a Child is born, unto us a Son is given; and the government will be upon His shoulder. And His name will be called Wonderful, Counselor, Mighty God, Everlasting Father, Prince of Peace. Of the increase of His government and peace there will be no end” (Isaiah 9:6–7).

So where is this peace that the birth of Jesus is meant to have brought about and that so many religious people refer to at this time of year? Unfortunately, focusing on a cute, harmless baby in a manger creates little more than a mirage of peace. The Christmas scenes, nativity plays and greeting-card pictures have immortalized Jesus in the minds of many as a baby. As Charles Wesley put it in his hymn “Gentle Jesus, Meek and Mild,” “the world shall always see Christ, the Holy Child, in me.”

English writer Steve Turner wrote a poem titled “Christmas Is Really for the Children.” It begins by detailing the holiday’s appeal to youngsters, with its animals, stars, babies, kings, etc. However, the poem takes a darker turn when describing Easter; we are told that it “is not really for the children unless accompanied by a cream filled egg. It has whips, blood, nails, a spear and allegations of body snatching.” He concludes by suggesting that children had best not ask “what Jesus did when he grew up or whether there’s any connection” between traditional Christianity’s two most important holidays.

The birth of Jesus, meant to be but part of the story of His life, has been given so much importance in its own right that it is virtually devoid of context and real meaning. It is not surprising that, faced with the harsh realities of life as depicted on the news or experienced first-hand, increasing numbers reject the religiosity of Christmas as a sham, a pretence of peace and goodwill. Of what relevance is the image, the concept, of “baby Jesus” beyond being comfort food for the soul? What is Christmas but a temporary band-aid for all of life’s problems—problems that will return with a vengeance once the lights and tinsel are put away for another year? Seeing this, many reject all that the Bible has to say on the subject of peace and hope.

The irony is that Christmas actually hides from people the real plan for bringing peace to this earth. It may come as a surprise to some that nowhere in the Bible is there any indication that we should celebrate the birth of Jesus. Instead the Bible is clear on setting out an annual schedule of festivals that picture, among other things, God’s plan to usher in a time of peace. These are the same festivals that Jesus Himself kept, as did His original disciples and early followers. They are still kept today by those who choose to try to live “by every word that proceeds from the mouth of the Lord” (Deuteronomy 8:3). (For more detailed information, see Foundations, Study Area 1.2, “The Plan of God”).

It is interesting to note that “Peace on earth and goodwill to all men” is actually a mistranslation that has been accepted and repeated without question over the years. The proclamation made by the heavenly host, witnessed by the shepherds while they watched their flocks, is more correctly translated “Glory to God in the highest, and on earth peace among those with whom he is pleased!” (Luke 2:14, English Standard Version). God is pleased with us when we do our best to obey His laws and commandments rather than following our own traditions (Mark 7:6–9).

Jesus was born into a part of the world that had seen a succession of military overthrows by conquering assailants, a place where warfare had been rife for millennia. At the time of His birth, Judea and its king, Herod, were subject to Roman rule. Herod, fearful of a rival king, tried to trick the magi from the East into telling him the whereabouts of this newborn king. They did not, and later Herod murderously decreed death for all boys up to the age of two (Matthew 2:16). To escape this fate, Jesus’ parents fled with Him into Egypt.

This was the world into which Jesus was born. All of these events took place during the reign of Roman emperor Augustus (27 B.C.E.–14 C.E.), a period that began what was subsequently dubbed Pax Romana, or “Roman Peace.” Under this arrangement the Roman Empire protected and governed individual provinces, such as Judea, permitting each to make and administer its own laws while accepting Roman taxation and military control. Of course, only those who did not oppose Roman rule experienced “peace” under this system. Much as now, it was in reality a world devoid of true peace.

During His ministry, Jesus, doubtless to the dismay of His followers, made it clear that He had not come to overthrow and replace the Roman overlords of the Jewish State. Instead He taught submission and respect to those in authority. On one occasion the Jewish secular and religious leaders tried to trick Him into pitting Himself against their Roman oppressors with regard to paying taxes to Caesar. But Jesus did not take the bait and confounded them by saying, “Render to Caesar the things that are Caesar’s, and to God the things that are God’s” (Mark 12:17). Likewise when brought to face Pontius Pilate prior to His crucifixion, Jesus declared that His disciples were not going to fight for His release: “My kingdom is not of this world,” He said. “If My kingdom were of this world, My servants would fight, so that I should not be delivered to the Jews; but now My kingdom is not from here” (John 18:36).

Clearly Jesus did not bring peace to the world simply by being born as a baby. Neither did He have any wish to create an uprising of the sort we have seen sweep much of the Arab world over the past year.

After His death and resurrection Jesus appeared to His disciples, at which time they asked Him, displaying a somewhat parochial outlook, if He was now going to restore the kingdom to Israel. He replied that it would be up to His Father in heaven to determine the right time to intervene. In the meantime, the disciples had a job to do, spreading the good news of God’s coming kingdom across the whole earth.

When He had ascended into heaven, angels appeared and told the disciples that He would one day return. It is this time that will herald a new world order, when Jesus Christ returns as King and Ruler and takes up the reins of government. It is then that Isaiah’s prophecy concerning true peace will begin to be fulfilled on a worldwide scale, as will the prophecy that says, “Nation shall not lift up sword against nation, neither shall they learn war anymore” (Isaiah 2:4). Isaiah was also inspired to write: “Then justice will dwell in the wilderness, and righteousness remain in the fruitful field. The work of righteousness will be peace, and the effect of righteousness, quietness and assurance forever. My people will dwell in a peaceful habitation, in secure dwellings, and in quiet resting places” (Isaiah 32:16–18).

The birth of Jesus was a wonderful event and one that signaled another phase in God’s plan for rescuing humanity. It did not, however, usher in a time of peace. Although God does indeed call us to live peaceful lives at present, the fulfillment of the promise of peace for the whole world is yet future. Christmas, with its mixture of biblical fact and human error and misconception, along with pagan ritual and rampant commercialism, serves only to obscure the truth—namely, that a time of peace is coming.