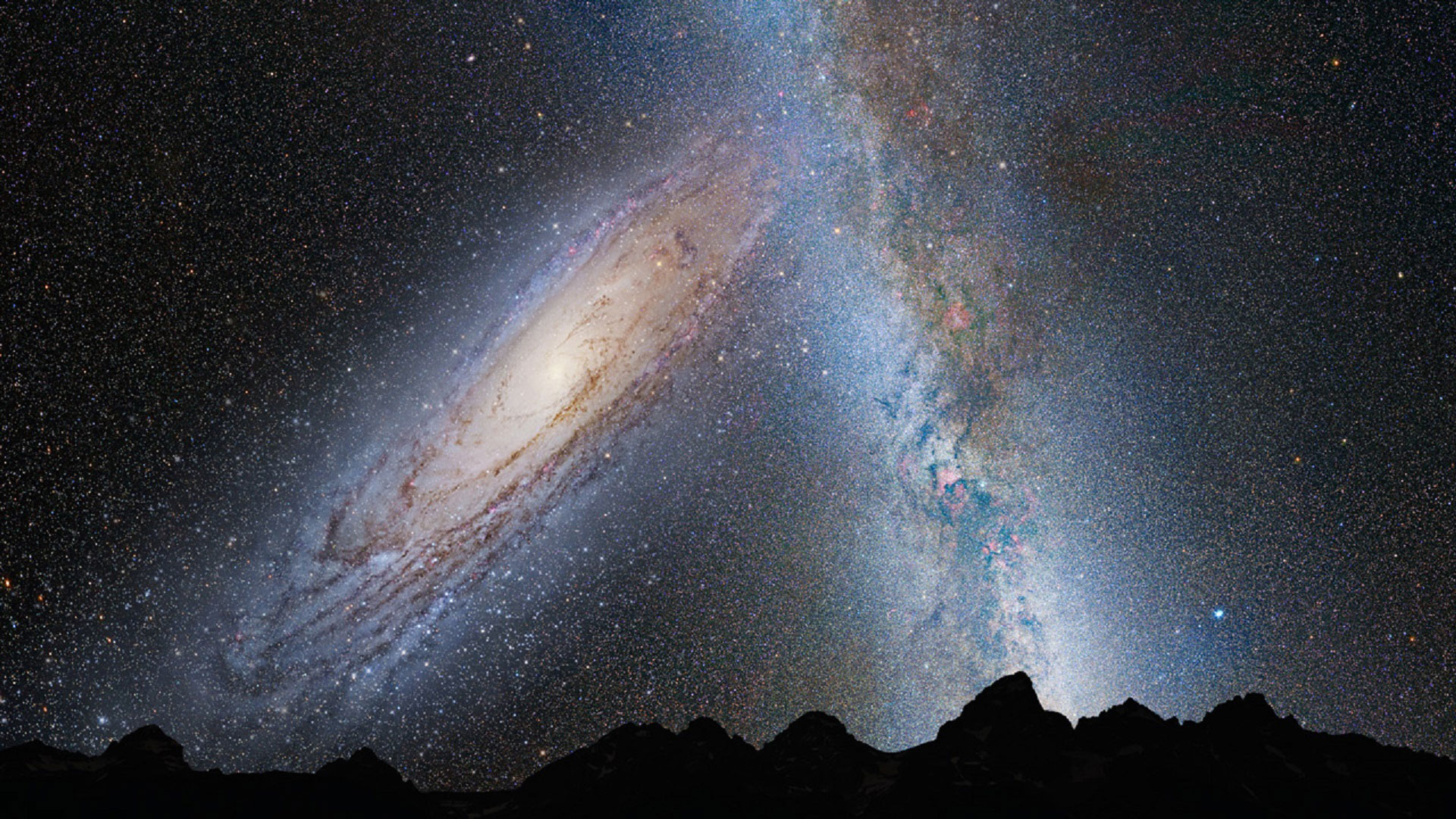 The most confounding question that arises from the big bang theory is a simple one: If the big bang is the origin of the universe, what happened before? Where did it come from? Doesn’t an origin event, however one eventually describes it, still require a cause?

Going on the defensive, many cosmologists liken such questions to asking “How high is orange?”—a mismatch of concepts. Human curiosity trumps illogic, however. When it comes to origins, we have a tenacious desire to chase down an answer.

Of course, the simplest explanation is to return to versions of the steady-state theory championed by Fred Hoyle. It was Hoyle who first mocked the idea of an origin event by coining the phrase big bang. In a steady-state universe, the evidence of expansion simply indicates that creation is a continuous process: the universe is not observed to be “thinning out,” because new material is constantly being formed. From this perspective, one cannot use the expansion rate to calculate a look-back time to a singular beginning.

In the 1990s, Hoyle and colleagues Geoffrey Burbidge and J.V. Narlikar proposed an updated theory called quasi-steady-state cosmology (QSSC). This model describes the Milky Way and our neighboring supercluster of galaxies as the result of a “mini–big bang” within the context of the larger expanding universe. The cosmic microwave background radiation is proposed to result from chemical elements created in the fusion reactions of stars. To its proponents, the abundance of elements and radiation indicate that this process has been going on for eons.

The QSSC describes “an oscillating, cyclic universe that never goes right back to a beginning,” Burbidge told Vision in a recent interview. The theory predicts a cycle time that is all but eternal, close to 800 billion years. There is no scientific way to ever investigate its dynamics. It will forever be an unknown. But to scientists who accept this or other non–big bang reasoning, the inability to imagine a beginning point is not a problem, because the theory does not presuppose a beginning. (See our interview with Eric Lerner.) Lerner advocates plasma cosmology, another alternative that isn’t bound by a cosmological starting point.

While QSSC theory and other alternative cosmologies are based on observational data, testable predictions or experimental evidence, the great majority of cosmologists today remain firmly planted on the big bang side of the origins fence. Having assumed the veracity of the big bang (thought to have occurred about 15 billion years ago), theorists go on to speculate freely about what preceded that event. Proponents of the alternatives to “big bangism” describe such scenarios as fantasy, ascientific—based on neither observations nor experimental evidence, and all the while beyond the realm of testability.

One suggestion is that the universe could indeed be cyclic (though on a much shorter cycle than QSSC suggests)—expanding, then contracting, and then expanding again. It may be that the current outward movement of the galaxies, as interpreted from the redshift, is a bounce that followed a collapsing crunch. Theoretical computer modeling carried out at the University of Pennsylvania last year attempted to recreate the “other side” of the big bang. In their conclusion, the researchers pictured a collapsing universe where at the last moment the force of gravity flip-flops from being attractive to repulsive. The last instant becomes the first instant, and expansion begins anew.

Actually, the possibility of collapse has intrigued physicists since expansion was first proposed. Is there enough mass to halt the expansion? Is there enough mass and therefore gravity to pull all of the material of the universe back together? Astrophysicists have put great effort in recent years into measuring the mass of the universe and its rate of expansion. Surprisingly, they have concluded that expansion is speeding up. This has given rise to the reincarnation of Einstein’s cosmological constant in the form of dark energy—a mystery force that seems to counteract gravity. A further problem is that galaxies contain too little matter to remain stable. This has led to the invention of invisible or “dark” matter, which together with dark energy strangely seems to make up as much as 95 percent of the universe’s mass.

Another way to avoid the puzzling questions of an origin event is to imagine universe beginnings as rather mundane, even commonplace events. According to the multiverse concept, it may simply be that our sights are too narrow when we limit ourselves to only one universe. “Over a long enough period of time, a baby universe such as ours would have been birthed into existence naturally,” insists Cal Tech cosmologist Sean Carroll. “Our observable universe and its hundred billion galaxies is just one of those things that happens every once in a while, and its arrow of time [and the physical laws that operate within it are] just a quirk of chance due to its beginnings amid a sea of universes” (“Time Before Time,” Seed, September 2006).

And so the “island galaxies” concept of Edwin Hubble’s day has morphed into “island universes.” The idea of universes bubbling up in a kind of multidimensional foam beyond our normal, limited, four-dimensional understanding is something one might imagine a modern Alice finding in a strange Cosmologyland. Yet, when this idea is combined with the expanding space-time described by the theory of relativity and an effect called quantum tunneling, literally anything can and does happen—theoretically.

“The entire eternally inflating spacetime [our expanding universe] originated as a minuscule closed universe,” explains physicist Alexander Vilenkin in Many Worlds in One: The Search for Other Universes. “It tunneled, quantum-mechanically, out of nothing and immediately plunged into the never-ending fury of inflation. . . . The universe is tiny right after tunneling, but it is filled with a false vacuum and immediately starts to inflate. In a fraction of a second, it blows up to a gigantic size.”

Theoretical physicist and Anglican priest John C. Polkinghorne argues that the scientific method of investigation, with its vast range of observational data, is useful in confirming metaphysical revelation. Concerning the island-universes theory, he describes it as simply evasive: a story that not only stretches the bounds of scientific credibility but also denies the possibility of a conclusion beyond material explanation. “In an attempt to reduce embarrassment [over a universe finely tuned to support human life], some made the metaphysical hypothesis that there is a vast multiverse of many worlds with different laws of nature, and ours is just the one where by chance the circumstances are right for life,” he writes in an essay titled “Physics and Theology Then and Now: How Did the Disciplines Get Split Up?” “Some of us consider this a very prodigal proposition and we believe that a more economic explanation is that the universe is the way it is because it is not ‘any old world’, but a creation that has been endowed by its Creator with fruitful potentiality.”

As diligently as we may try to find an explanation using only our own resources, science alone does not have the means to answer our most profound questions. At some point we must come to the conclusion that we cannot know the beginning. The biblical story of Job bears this out: “Where were you when I laid the foundations of the earth?” was the opening salvo in a barrage of God-delivered questions that left Job reeling and finally aware of his own limitations (Job 38:4).

Human consciousness is imbued with the sense and hope that there is more beyond the physical. To want to believe that there is a purpose to creation and that there is more to our lives than mere biological function is a spiritual yearning built into our being. As Job said, so we too have “heard of you by the hearing of the ear.” In other words, we have an arm’s-length belief that there is more to our existence than science can reveal. Crunch time comes, however, when this belief becomes personal. When Job could finally declare “Now my eye sees you,” he was convicted to put revelation, and the understanding it brought, into action (Job 42:5–6).

If we allow science alone to be the measure of our understanding, we will be forever frustrated in our quest for purpose in the universe. The Creator revealed in the Bible says He is personally interested in all human beings. He is not merely interested in the fact that we exist; he is interested in our willingness to act on what we claim to believe. Are we allowing science to help us “see”? Or are we using science to block us from a reality we refuse to admit?