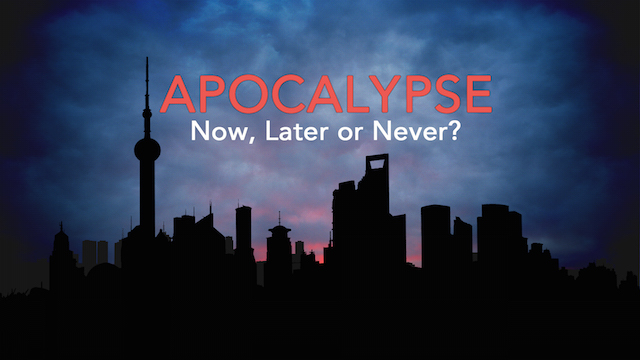 The Apocalypse, or book of Revelation, is a puzzle to most people who take the time to read it. Filled with strange visions, blood and smoke, terrifying warfare, fearsome beasts and evil rulers, it reads like a nightmare of the worst kind. It was recorded by a man named John following his extraordinary experiences on the Greek island of Patmos near the coast of what is western Turkey today.

The term apokalypsis, from which the book’s title comes, means “the revealing” or “unveiling”—in this case, of things yet to come. Yet most people’s reactions suggest that, far from uncovering the future, the book’s contents remain little understood. The one exception concerns what’s commonly known as Armageddon, the massive confrontation between God and unrepentant humanity near the close of what is called “the present age.” So apocalypse has come to mean “overwhelming catastrophe” or “cataclysm.”

In the preface to early editions of Martin Luther’s New Testament translation, the reformer famously said of Revelation, “Let everyone think of it as his own spirit leads him.” He judged the record of John’s visions to be “neither apostolic nor prophetic,” though over time he came to a different view.

English Bible scholar J.B. Phillips expressed similar misgivings. He wrote in the introduction to his 20th-century version, “I was naturally tempted to omit this book altogether from my translational work.” He noted that this was the course John Calvin had chosen in his New Testament commentary.

Some scholars today feel that the book offers little more than an interesting historical perspective. One such scholar is author and Boston University professor David Frankfurter: “I think this is very important as historical literature, and I think it’s had a tremendous impact on the history of art, the history of literature, the history of culture. I think it should be studied for that. I would be afraid of talking about this as having a helpful message, either for people who are in difficult straits in this world or people who are hoping for a better world, because the violence that is committed against, not oppressors but those who are unclean in this text, is quite extreme.”

Judith Kovacs and Christopher Rowland have studied how the book has been received over the past 2,000 years. According to their research, most people have taken one of two approaches. They view the book as either a coded message about the working out of history in humanity’s final days (in which they believed they were living) or as a series of exhortations to live a moral life at the political, ecclesiastical or personal level.

Someone who represents this view is Harry Maier, a Canadian of German extraction. His Lutheran parents fled Soviet-occupied Eastern Europe following the Second World War. As a child Maier regularly heard his mother and father frame their recent experiences in apocalyptic terms. In his book Apocalypse Recalled (2002), he tries to get at the significance of Revelation for the present rather than focusing on the end of human history: “How, then, for those members of Christian communities who are reading Revelation—how, then, shall they hear Revelation? As a kind of thinking about ‘the sweet by and by’? Or the seven last years of history, when there will be tribulation, and then Jesus will rescue us from all the bad things that are to come? Or as a call to living, faithful witness, with openhanded generosity in the here and now? These are very different readings, and they make all the difference in the world to what kind of religious community we inhabit, what we expect from our nation-state, what we expect from our government, how we will be citizens in the world.”

A similar view comes from New Testament scholar Craig Evans, for whom the Apocalypse is primarily a call to Christian responsibility and responsiveness. Here he talks about the book’s messages to seven congregations in first-century Asia Minor, and draws a conclusion for today: “His Church is to bear witness, it is to live out its Christian life with integrity, and it is not to conform to the pagan world in which it finds itself, or to become cold-hearted, shallow and indifferent. So there is this exhortation that lies behind, sometimes quite explicitly, all seven letters. I think that that means the message is as applicable today as it was at any time.”

This doesn’t mean that Evans is a supporter of fundamentalist approaches to prophecy anymore than Harry Maier or David Frankfurter are: “Of course, then you get into this type of a hermeneutic that I don’t like, which is taking Bible passages and comparing them to newspaper headlines and trying to draw inferences about eschatology. I find it reckless and irresponsible. And that stuff seems to meet a lot of needs for a lot of Christians, especially in the West. I find it, frankly, deplorable.”

Yet a complete reading of the Apocalypse cannot avoid the conclusion that while there’s certainly the call to moral responsibility, there’s also a clearly defined cataclysmic end to human evil. What Kovacs and Rowland have defined as either/or approaches in Revelation’s reception history are not the only way to read the book, nor is Frankfurter’s purely historical view the only alternative. We can have aspects of all three without the pitfalls of fundamentalism.

It’s clear that so many parts of the Bible are interconnected and consistent with each other. The writings of the prophets of old, such as Isaiah, Jeremiah, Ezekiel and Daniel, have much in common with those of the early followers of Jesus, including the apostles and authors of the New Testament. When we connect the dots, it becomes obvious that they believed that one day God would intervene to resolve impossible human problems.

Harry Maier takes the view that action in the present is the appropriate response to the book’s themes. The apostles and prophets would certainly agree. Maier is concerned about modern imperialism, about the perils of globalization and the desire of every nation for an increasing share of the economic pie. He sees the rampant materialism brought about by Roman peace and prosperity (the first-century context of John’s writing) being replicated in the 21st century. That’s to say, he sees the way of life promoted by the Pax Americana as the current problem, whereas John lived in the shadow of the Pax Romana.

But Maier does not believe that Revelation is about the end of the world. He acknowledges that by greedy, irresponsible behavior in the political, economic and environmental spheres, we could bring about our own downfall: “That way of thinking is doomed to failure for everyone; it’s doomed for destruction for everyone. So Revelation is really inviting us to a different kind of imagination.”

This different way of looking at life would involve reassessing the long list of the world’s tradable commodities found in Revelation 18. The list includes not only food and drink but also precious metals, exotic furnishings, gemstones, fabrics, perfumes and the very troubling exploitation of “the bodies and souls of men.”

Harry Maier: “Twenty-four words that describe luxury goods, and as these terms are listed off, it’s almost a burlesque of the most costly wares you can imagine—people obviously profiting an enormous amount from this, and now they experience all the loss that comes from all of their hopes and dreams being disappointed with the collapse of all of this. . . . The book of Revelation is deeply comforting for people, and it always has been—comforting for people who are suffering marginalization and so on. But for those who are at the top of the dog pile, it is intended to be a very unnerving book. It really urges those of us who inhabit plenty, with a lot of material wealth—it urges us to ask where our allegiances lie. To whom do we belong? To what do we give faithful witness? What, after all, would we be willing to lay our lives down for? That’s the question.”

While we cannot know exactly when the present age of human self-government will end, nor the precise moment of Jesus Christ’s return, the Apocalypse does unveil the kind of world that will precede His coming. It also teaches those who have ears to hear how they must distance themselves from the way of man, the so-called government of Caesar, and anticipate by their way of living the coming sovereignty of God the Father and His Son.