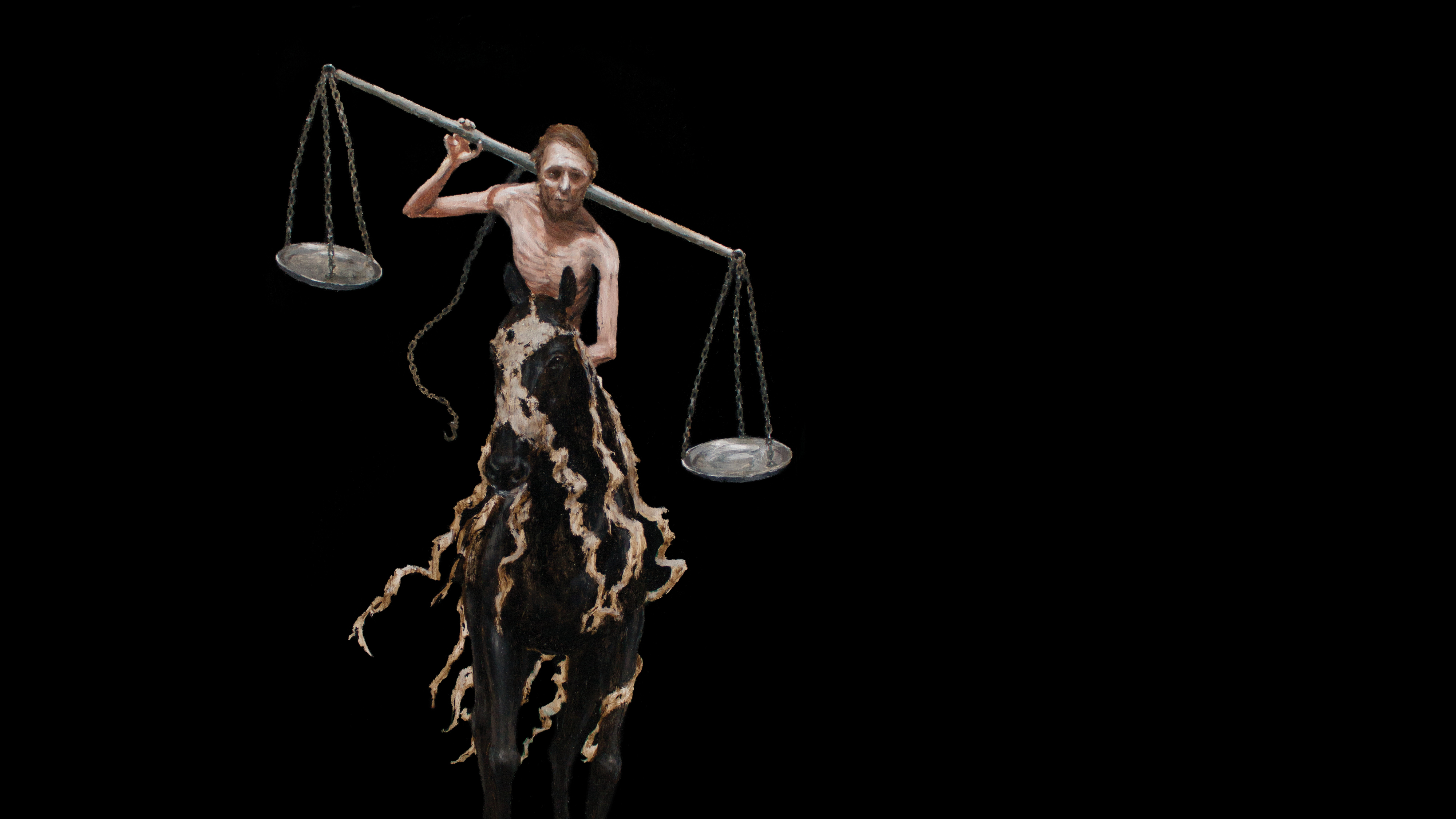 Set free to gallop across the earth some two thousand years ago, the Four Horsemen continue to pose dangerous threats to a largely unsuspecting world. In this episode we’ll discuss the third in the sequence—the black horse—and what its rider brings on humanity.

As John’s vision shows, the red horseman of war can be a lead-in to a third devastating condition: “When He opened the third seal, I heard the third living creature say, ‘Come and see.’ So I looked, and behold, a black horse, and he who sat on it had a pair of scales in his hand. And I heard a voice in the midst of the four living creatures saying, ‘A quart of wheat for a denarius, and three quarts of barley for a denarius; and do not harm the oil and the wine’” (Revelation 6:5–6).

More than six decades earlier, Jesus had explained that war would be only one of several long-lasting global conditions. In Matthew’s Gospel, He added this warning: “And there will be famines . . . in various places” (Matthew 24:7).

In the first century a denarius would be about a day’s wages; and wheat for human consumption was generally more valuable than barley, which was mostly used for animal feed. The comment about not harming the oil and wine may be ironic if suppliers were profiting from producing more lucrative items, like wine and oil, and cutting back on staple foods, making famine worse. Devastating food shortages certainly happened centuries later in the collapse of the Roman Empire as invading tribes attacked the overextended superpower.

In the 19th century the black horse also appeared in sequence after the white and red horses when the Chinese false messiah Hong Xiuquan promoted himself as savior and went to war with his countrymen for 15 years. During that time an estimated 20–30 million are thought to have died, mostly from famine and its natural consequence, epidemic disease.

Joseph Stalin went to war with his fellow citizens in 1929, when he launched an attack on Soviet farmers. He was determined to wipe them out as a class. This led to a catastrophic famine and the death of 5–8 million people.

In a similar move, Mao Zedong declared a war of sorts on his own people, a violent attempt to advance China industrially on the backs of the populace. Between 1958 and 1960, Mao ordered the nation’s agricultural sector to produce as much food as possible so that it could be exported to the Soviet Union in exchange for industrial help. False claims were made about the country’s improving productive capacity, and critically needed foods were exported. By 1961, farm laborers were being forced into industrial production. But bad weather, poor harvests and a diminished workforce brought about the death of almost 38 million from starvation and overwork. Mao refused to accept that his policies had caused the worst famine in Chinese if not world history. Instead he blamed those party officials who criticized his ideas.

The Black Horse and its rider represent terrible famines that have destroyed millions of lives in one more chapter in the history of human tragedy. Let’s emphasize that many of these deaths were caused by delusional leaders. But it’s not just lack of food that leads to famine. The precursor is sometimes a lack of water. Tragically a child dies from hunger-related causes every six seconds. Freshwater is currently under threat for almost 80 percent of the world’s population. Without adequate water supplies, food cannot be produced.

Population growth and increasing prosperity are exerting demands on resources that cannot be withstood. Without coordinated strategies, the potential for disastrous consequences looms. The earth has a fixed amount of water, of which 97 percent is saltwater and only about 3 percent is fresh. Of the freshwater, only about one third of it is accessible; the rest is trapped in ice and glaciers.

In terms of freshwater consumption, agriculture alone accounts for 70 percent. Added to this is the reality that the three largest countries by population (China, India and the United States) are engaged in unsustainable water use in grain-growing areas. Complicating matters is the fact that both meat consumption and population are increasing. Industrialized meat production is far more water intensive than grain production, so without radical changes in eating patterns, the already high amount of water needed for agriculture will only increase.

In our fourth and final installment in this series, we’ll consider the Pale Horse, its rider and his terrible companion.