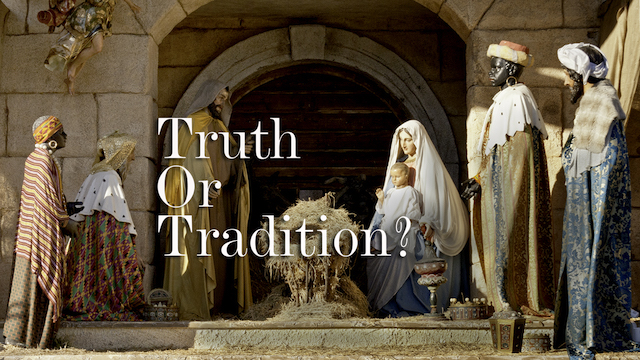 Religious traditions do not always reflect truth, but because they are traditions, they are often difficult to reverse, even when the truth becomes well known.

Take the Christmas story. It’s laden with traditions—from elves to reindeer, from candy canes to decorated trees, from Santa Claus to the three wise men. How all these elements were added to the original story is a study in itself.

And now the pope has written a book that questions some of the traditions. Jesus of Nazareth: The Infancy Narratives went on sale in November, no doubt to coincide with the season. Pope Benedict XVI has written it under his name, Joseph Ratzinger, as well as his papal title. This perhaps allows him to state opinions that may not yet align with official Roman Catholic teaching.

He says that Jesus was born earlier than the church has traditionally believed. According to the pope, his predecessors came to the date of 1 AD for Christ’s birth only in the sixth century, because of “the monk Dionysius Exiguus . . . who evidently miscalculated by a few years. The historical date of the birth of Jesus is therefore to be placed a few years earlier.”

When it comes to the typical details of the Christmas stable scene, the pope tells us, “In the Gospel there is no reference to animals at this point.” But he later notes, “No representation of the crib is complete without the ox and the ass,” as we see in this nativity scene on display outside St. Peter’s in Rome. In other words, added traditions win out over the biblical record.

Another example of tradition displacing what the Bible says concerns the familiar wise men, or magi, who visited the infant Jesus. In this case the pope doesn’t correct tradition’s error. The Bible says nothing about how many magi came and doesn’t call them kings. But the cover of the pope’s book features a 15th-century Italian illustration of Jesus being shown to the traditional three monarchs. In his text the pope goes into detail about what the three kings represent.

But how did this imagery become part of the tradition? Here’s a clip on the subject from a Vision documentary.

“Notice that the New Testament record says nothing about how many wise men came. Yet tradition tells us that there were three of them. This is in one sense a minor point, but it illustrates the imprecise way the details have been treated. If we can’t get these simple facts correct, what about the more complex matters of faith and practice?

“Tradition further confuses the account by making the three men kings as we can see in this Rembrandt sketch from 1632. But apparently the three kings’ theme only became popular in the Middle Ages; perhaps because three gifts are mentioned—gold, frankincense and myrrh. Rembrandt and other artists perpetuated the misconception about three kings by showing three visitors in regal clothing from the East. But the New Testament record is silent about the magi as kings.

“Tradition takes another step in the wrong direction by teaching us that the magi visited Jesus at His manger. Notice that Matthew’s Gospel states quite different facts about where the magi visited Jesus. ‘The star they had seen in the East went ahead of them until it stopped over the place where the child was. When they saw the star, they were overjoyed. On coming to the house, they saw the child with his mother Mary.’”

These visitors came to see a child in a house, not a newborn in a stable. Once again we see how easily the simplest facts are distorted, and yet we wouldn’t allow such looseness with the histories of other people. It’s the same when we go beyond The Infancy Narratives.

Little is known of Jesus’ early years. We do know that His father was a carpenter. The word used by the Gospel writer Luke is tekton. It means a general contractor. In those days houses and buildings were made primarily of stone. Growing up with such a father, Jesus would have experienced a somewhat rugged working life. But this is not what we see in so many representations of Jesus. Traditional art often portrays Jesus as a soft, weak looking man with long hair. But the historical record suggests that young Jewish men of that period did not have long hair. And the context suggests that Christ was a strong, masculine builder.

Tradition often contradicts the biblical story line. If we can get it so wrong about Jesus’ early life, what about the truths He taught as an adult? Is it any wonder that people are mixed up about what happened in Bible times and about what the Bible actually says? Sadly, organized religion and its nonbiblical traditions have often blurred the truth.