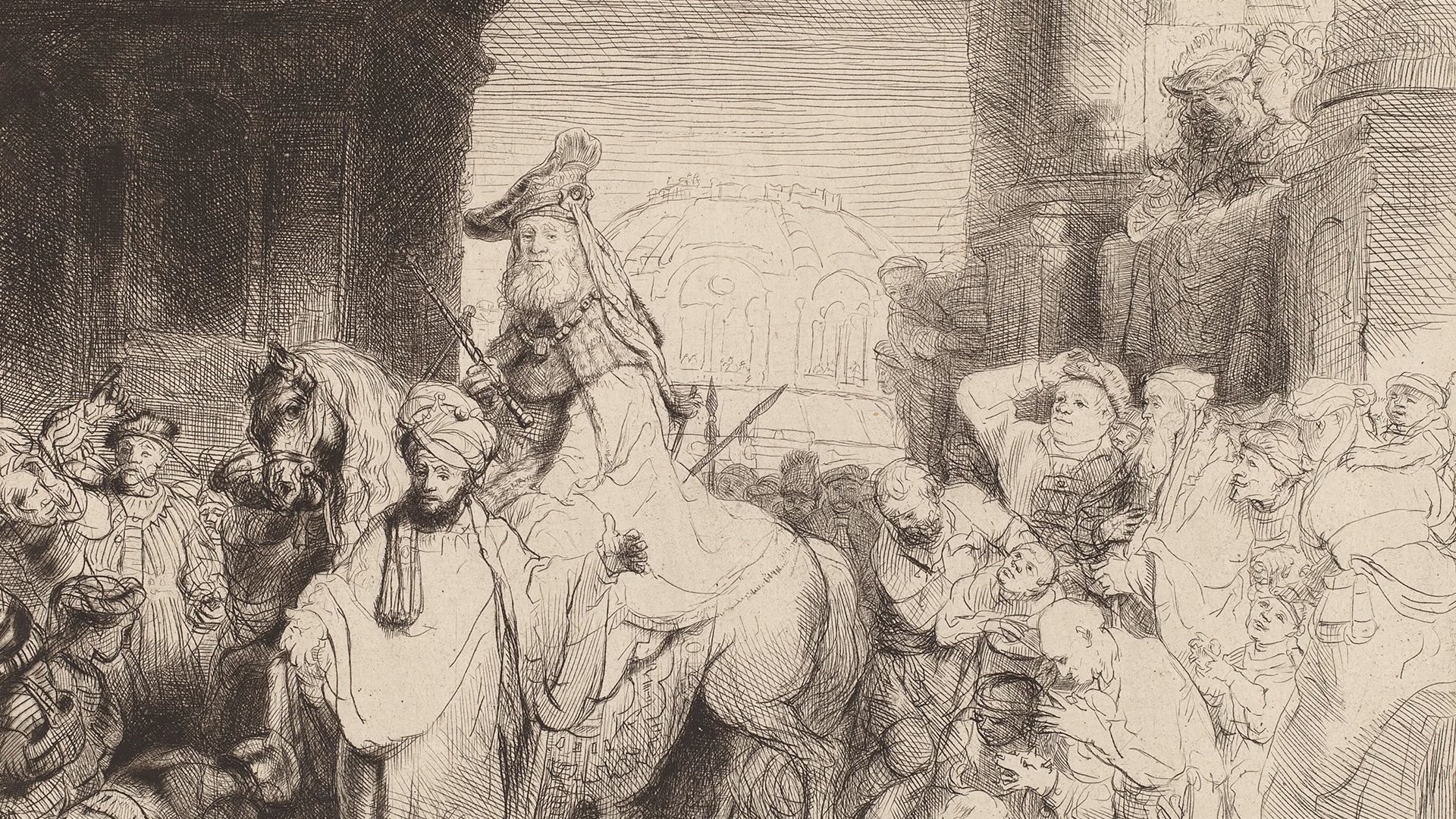 The book of Esther tells a sinister story of entrapment and potential genocide. With her Jewish ethnic group scattered across a wide swath of the Middle East, from India to Ethiopia, the new queen of Persia, Esther, was called on to save them from all-out massacre. How had such a dire situation arisen?

Esther’s husband was king Ahasuerus, or Xerxes I (Esther 1:1), who ruled Persia from 485 to 465 (BCE throughout). The story opens with the king becoming displeased with his previous wife, Vashti, and the lengthy process by which he chose a new companion. Eventually he settled on Esther, the young orphaned cousin of a Jew named Mordecai. The man was descended from a Benjamite family that had been among those whom Nebuchadnezzar had removed from Jerusalem in 597 (2:5–6). But Mordecai preferred not to make his ethnic identity known, and Esther was happy to keep it that way.

The story becomes more involved, with Mordecai learning that two of Xerxes’ servants were plotting to attack the king. He informed Esther and was thus instrumental in saving the king, whose chronicler noted the Jew’s name in the official record (verses 21–23).

But with the promotion of an official named Haman to high office in the kingdom, Mordecai soon ran into great difficulty. By refusing to bow in homage to Haman (thought by some to be a descendant of the Amalekites, the enemies of Israel from ancient times), he disobeyed a royal edict (3:1–2). Colleagues tried to reason with Mordecai, and in the process he revealed that he was a Jew. Haman, angry that Mordecai would not bow to him and now aware of his ethnicity, went to war against his people: “Haman sought to destroy all the Jews who were throughout the whole kingdom of Ahasuerus—the people of Mordecai” (verse 6).

Next we learn that in the 12th year of Xerxes’ reign, 474, the lot (in Hebrew, pur) was cast in Haman’s presence to determine the most “propitious” day to exterminate the Jews. Haman then went to the king and requested permission to carry out his plan: “There is a certain people scattered and dispersed among the people in all the provinces of your kingdom; their laws are different from all other people’s, and they do not keep the king’s laws. Therefore it is not fitting for the king to let them remain.” Haman calculated that the equivalent of more than 300 tons of silver would flow into the king’s coffers as a result of his actions. With the king’s assent and the date decided, scribes wrote copies of the royal decree of annihilation and sent it to all provinces in the local languages (verses 7–12).

“Haman’s reaction is unmistakably motivated by racial hatred so callous and senseless that, beside it, Mordecai’s pride pales to insignificance.”

Esther’s remarkable courage now became evident. Hearing of the decree, Mordecai put on sackcloth and ashes and went into the public area where Esther could see him. From there he was able to get a message to her that now was the time to speak up for her people, despite the strict rule of not initiating contact with the king. “Who knows whether you have come to the kingdom for such a time as this?” he asked (4:14).

Esther determined to fast for three days and nights with her handmaidens and asked Mordecai and the Jews to do the same. Then she would approach the king with her plea (verses 15–17).

Making herself available in the inner court, she caught the king’s attention. He not only looked on her favorably but said he would grant her whatever she desired, “up to half the kingdom.” Esther wisely proposed a banquet for the king and Haman at her house that day (5:1–5).

As they dined, the king asked about her petition. She suggested that they return for a second banquet the next day, and then she would tell them. Haman left the meal pleased at what he saw as his favor with the queen. He proudly talked to his wife and friends that day about all he had achieved, yet he admitted that the one thing that still irked him was Mordecai’s unwillingness to bow to him. His wife and friends advised him to first get the king’s permission to hang Mordecai and then go to the banquet. That night workers constructed a gallows (verses 6–14).

The king, in the meantime, experienced a troubled sleep. Getting up to ease his mind, he had his servants read to him from the nation’s annals and was thus reminded of Mordecai’s earlier good deed in exposing the plot against him. The king wanted to know the nature of the reward Mordecai had received. “None” was the reply.

At that moment, early in the morning, Haman arrived to seek the king’s permission to execute Mordecai. The king bid him come in. But before Haman could speak, Xerxes asked him what kind of reward should be given to “the man whom the king delights to honor.” Assuming the king had him in mind, Haman answered with a list of honors in recognition of his elevation, including being arrayed in one of the king’s royal robes and being paraded through the city on a horse that the king had ridden and that bore his crest. Then the king, in one of the great ironies of the account, commanded that Haman do so for Mordecai. Haman complied, leading the man he despised on horseback through the city square while proclaiming, “Thus shall it be done to the man whom the king delights to honor!” (6:4–11).

Mournfully returning home, Haman was met by his wife and friends, who assured him that his animosity for Mordecai’s Jewish identity would surely bring him down. At that moment the king’s servants came to take Haman to the banquet with Esther (6:1–14).

Now the king asked Esther again about her petition. She explained that she and her people were about to be annihilated. Who would plan such an outrage, the king enquired. “This wicked Haman!” replied Esther. Haman pleaded with Esther for his life. But the king, in his anger, ordered Haman’s execution on the very gallows he had prepared for Mordecai (chapter 7).

The king bestowed the house of Haman on Esther, and she appointed Mordecai as its head. From then on Mordecai played an increasingly prominent role in the Persian kingdom, becoming second to the king (8:1–6; 9:4; 10:3). The plot against the Jews was forestalled, the king issuing letters that would effectively annul the previous death sentence. Jews would be permitted to protect themselves against any who might attack them on the 13th day of the month Adar—the annihilation day that had been chosen by lot, or Pur, in Haman’s presence.

When the day came, the Jews throughout the empire “defeated all their enemies with the stroke of the sword, with slaughter and destruction, and did what they pleased with those who hated them” (9:1–5).

From then on the Jewish people have celebrated the festival of Purim on Adar 14 and 15 “as the days on which the Jews had rest from their enemies, as the month which was turned from sorrow to joy for them, and from mourning to a holiday; that they should make them days of feasting and joy, of sending presents to one another and gifts to the poor” (verses 18–22, 26).