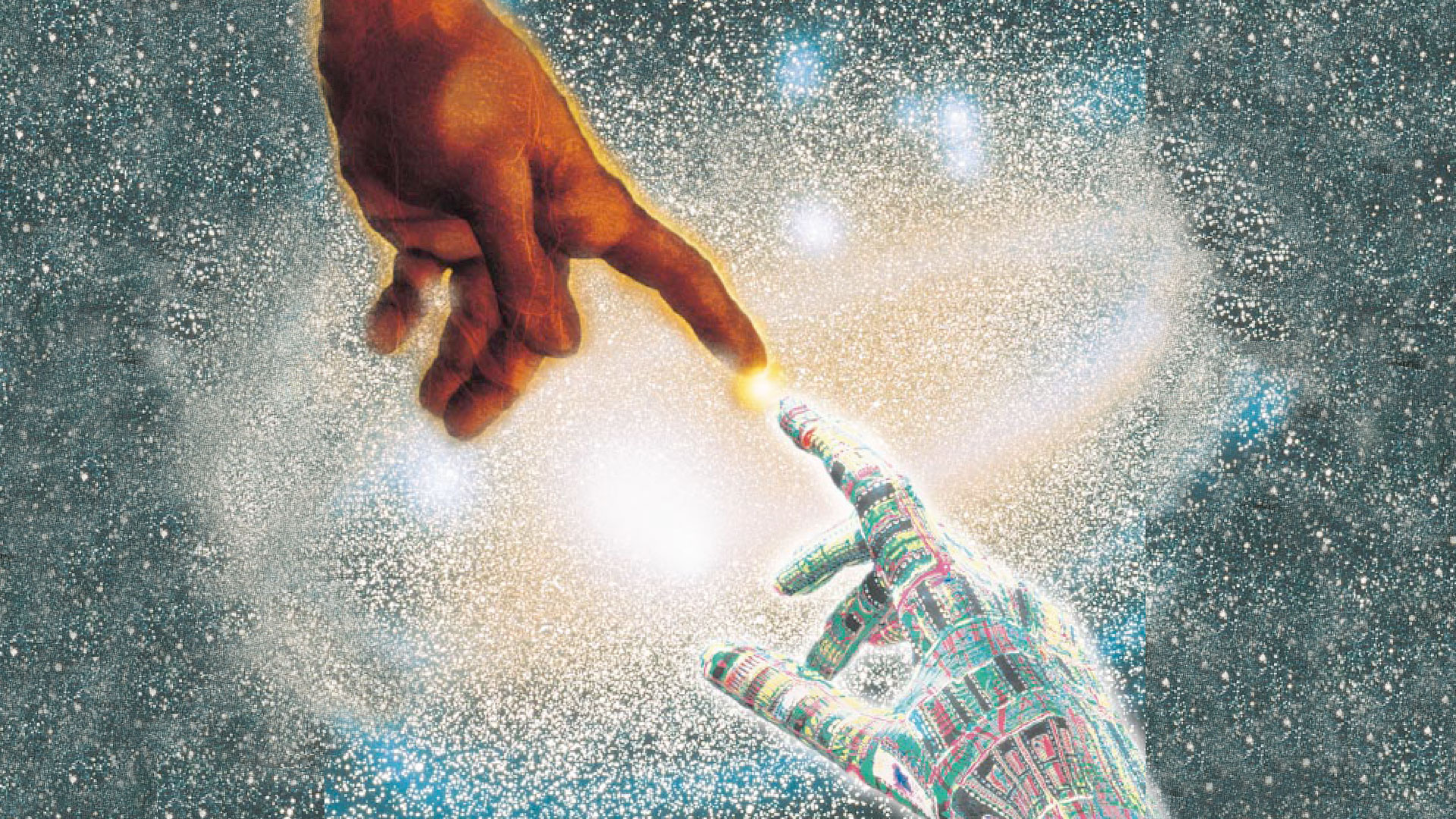 The question of origins—of the universe, of life and of the human race itself—has divided the biblical and secular communities since the advent of the great scientific thinkers.

From the time of Aristotle around 2,400 years ago until relatively recently, science has claimed the universe to be eternal—having no point of creation.

On the other hand, Moses, more than 1,000 years earlier, stated categorically in the first book of the Bible that there was a beginning to the universe.

These two positions would seem to be irreconcilable, and yet in recent years the scientific community appears to have come into line with biblical teaching, albeit from a very different viewpoint.

Regarding the question of the origin of the universe, the ideas of Aristotle have dominated secular thinking for more than two thousand years. In ancient times astronomers looked at the seemingly unchanging heavens above them, and their logical conclusion was that the universe we know is static and eternal.

In the centuries that followed, the names of the scientists have changed, and the complexity of theories has increased, but the idea of an eternal universe with no beginning has remained unchallenged.

Only in this century has evidence become available to counter this point of view.

In 1929 Edwin P. Hubble first discovered the expansion of the universe from the shifting of spectral lines in the light emitted from distant galaxies. In the same way that the sound from a siren on a police car changes pitch as it passes by, the light from the galaxies changes color slightly as the galaxies move away from us. What Hubble concluded was that the further away from us a galaxy is, the faster it is receding, just as would be the case if the universe were expanding uniformly in all directions. The antithesis of this is that in the past all the galaxies were closer together, and that even further in the past they were all in the same place.

This discovery was responsible for the continued development of an early form of the big bang theory, or the "primeval atom" as Georges Lemaître had suggested in 1927. According to his conjecture the galaxies are the remaining fragments of the explosion of this primeval atom, resulting in an expanding universe. However, the scientific community was not ready to accept this idea for some time.

Albert Einstein’s general theory of relativity had been published in 1917. As Einstein formulated that theory, he was surprised to find that, contrary to available evidence, it predicted an expanding universe. To remove this expansion from the theory, he added what he called the “cosmological constant” to his equations. Thus his theory remained in line with contemporary thinking in predicting a static and eternal universe.

As a result, though Einstein could have been credited with predicting the expansion of the universe, that honor went to Hubble 12 years later. Einstein later looked back on the introduction of the cosmological constant as the greatest mistake of his life.

In 1948, in the face of continuing evidence that the universe was indeed expanding, astronomers Hermann Bondi, Thomas Gold and Fred Hoyle presented their steady-state theory. To them, the idea that the universe had a sudden beginning was philosophically unsatisfactory. Instead they theorized that, while the universe may be expanding, new matter is being created on an ongoing basis to make up for the decrease in density that expansion causes. This new matter, they proposed, condenses into new galaxies that replace those that are receding. The universe therefore remains in a “steady state” of expansion and regeneration—and therefore always looks the same.

It was also in 1948 that George Gamow, a Russian-born scientist who had defected to the United States, modified Lemaître’s theory into the more commonly known big bang theory. According to this theory, the universe is the result of an enormous explosion. Gamow and colleagues postulated that the various elements that make up the universe we see today were produced within the first few minutes following this intensely hot cosmic explosion. As time progressed, the hydrogen and helium produced by the big bang cooled and condensed into the first stars and galaxies.

A predicted consequence of the big bang theory was that as the universe expanded, the residual radiation from the explosion would continue to cool. Calculations showed that this radiation would now be at a temperature of around –270 degrees Celsius or –454 degrees Fahrenheit. But it was not until 1965 that this background radiation was finally detected. As a result, most astronomers abandoned the steady-state theory, and the big bang theory became generally accepted.

Only at this point did the scientific community finally come into agreement with the biblically oriented community, in that both now believed that the universe did indeed have an origin—a point of creation—a finite time ago.

In With the Old

It turns out that the old is not necessarily the wrong. Rather, it has taken science thousands of years to discover the knowledge of origins that Moses wrote about in the book of Genesis. One should remember that it is only in the past 30 to 35 years that this agreement has been in place, after thousands of years of disagreement. This is easy to forget in a world where most have heard of the big bang and few can remember a time when it was not generally accepted.

Why was the secular community so reluctant to consider a universe that had a beginning?

Why, then, was the secular community so reluctant to consider a universe that had a beginning? Why was a sudden beginning philosophically unsatisfactory? Why did astronomers in 1948 suggest, in what is now considered an unrealistic theory, that matter was constantly being created between the galaxies?

The answers may lie in what has been termed the “problem of Genesis.” This problem is, in its essence, one of first causes. A basic principle in physics is that every effect has a cause. A first cause for the big bang, and therefore the universe, requires something preceding the physical universe. It is interesting to see that, because of the very nature of the physics involved, science is completely unable to see back in time before the big bang itself. Thus every speculation about what this first cause was is equally valid, including that of a Creator God.

On the other hand, a universe that has existed for eternity has no need of a first cause—no need for a creator, and therefore no need to explain anything the physical sciences cannot examine.

Why are some so reluctant to consider events that are beyond the scope of the physical sciences?

Still prevalent today is the idea that anything that cannot be observed or subjected to repeated experiment does not exist. This notion is clearly obvious in the works of people such as Darwinian evolutionist Richard Dawkins, who likens religion to a virus—more infectious than smallpox—handed down from generation to generation.

Yet, a belief system that makes no allowance for the supernatural (that is, the nonphysical) leaves man alone to decide his own fate as he likes, and the license to do as he pleases. More importantly, however, ignoring the possibility of things beyond the physical realm can lead us to draw the wrong conclusions about our existence.

The Bible describes this very process among scientists: “For since the creation of the world [God’s] invisible attributes are clearly seen, being understood by the things that are made, even His eternal power and Godhead, so that they are without excuse, because, although they knew God, they did not glorify Him as God, nor were thankful, but became futile in their thoughts, and their foolish hearts were darkened. Professing to be wise, they became fools” (Romans 1:20–22).

With regard to the origin of the universe, it seems that the Bible may have been right all along. But should it surprise us that so many within the scientific community try to avoid the possibility of a Creator God?

Admittedly, the construct of the scientific method is such that it cannot examine the nonphysical. One must turn to divine revelation apart from science to obtain the complete picture. Again we turn to the Bible, where the apostle Paul speaks of the differences between human understanding and that revealed by God.

In 1 Corinthians 2:11–14 Paul says, “For what human being knows what is truly human except the human spirit that is within? So also no one comprehends what is truly God’s except the Spirit of God. Now we have received not the spirit of the world, but the Spirit that is from God, so that we may understand the gifts bestowed on us by God. And we speak of these things in words not taught by human wisdom but taught by the Spirit, interpreting spiritual things to those who are spiritual. Those who are unspiritual do not receive the gifts of God’s Spirit, for they are foolishness to them, and they are unable to understand them because they are spiritually discerned” (New Revised Standard Version).

In this age where science has become a popular belief system in itself, we should be careful not to allow the scientific method to blind us to those things that are not physical. If it does, we will not see the whole picture, and, as has been the case with the scientific community in this instance, our understanding will be incomplete. In the words of Albert Einstein, “science without religion is lame; religion without science is blind.” Less often quoted but equally incisive is this observation, also from Einstein: “Science can only ascertain what is, but not what should be, and outside its domain value judgments of all kinds remain necessary.”

The Bible does not claim to be a scientific textbook, but it does hold the answers to key questions about our existence.

The Bible does not claim to be a scientific textbook, but it does hold the answers to key questions about our existence. It should not be overlooked.

Indeed, under the weight of increasing scientific evidence, it clearly deserves much closer examination by those who have too easily dismissed it.