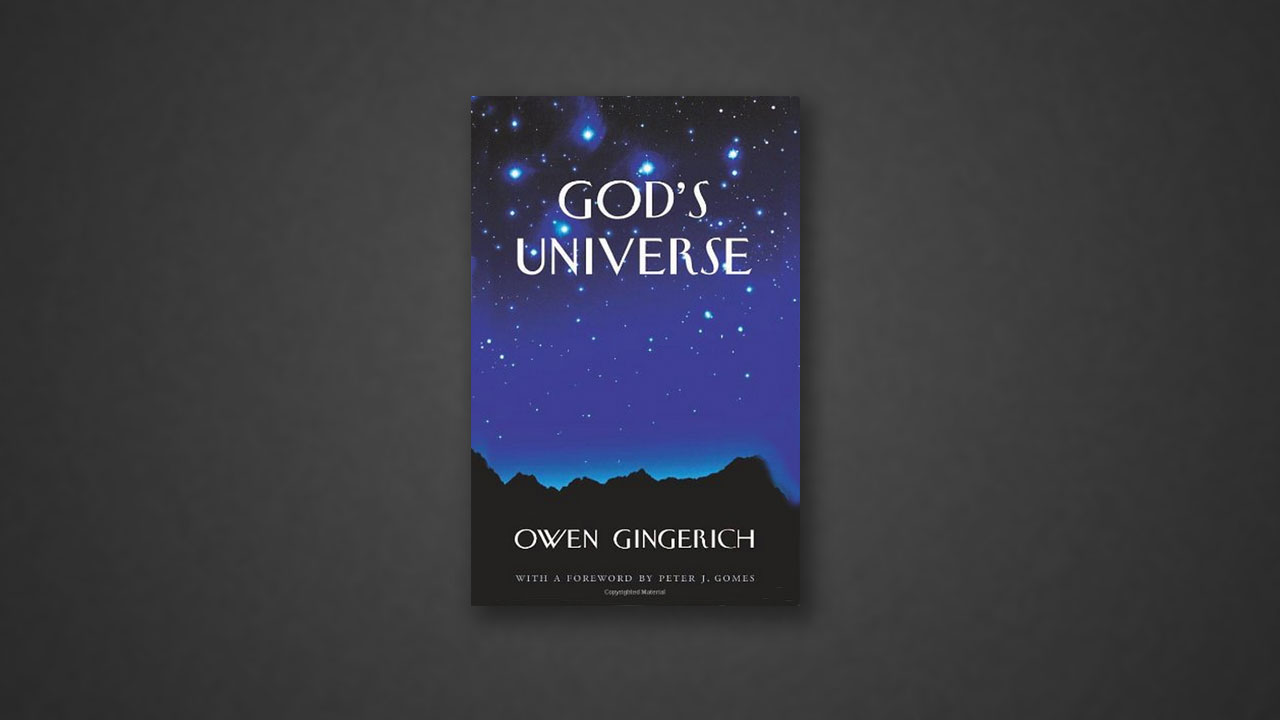 Listening to the debate stirred up by Richard Dawkins and other atheists in their attacks on God and religion, you would think that science and religion are completely incompatible, and that no respectable scientist could possibly believe in God or be religious. But the facts speak otherwise.

A growing body of scientists, religious or otherwise, disavow Dawkins’s extreme secular fundamentalism, believing that his aggressive, intolerant, antireligious approach fails to provide a scientific view that is representative of the whole. They believe his expressed position does great disservice to the cause of effective dialogue between science and religion at a time when it is most urgently needed.

Owen Gingerich is one scientist whose perspective counters that of Dawkins. He declares a robust belief in a personal, all-powerful God, believing that science and religion are not only compatible but complementary, and that greater balance, accuracy and moderation are needed in the way atheistic scientists express their views of God and religion.

Gingerich is professor emeritus of astronomy and of the history of science at Harvard University and senior astronomer emeritus at the Harvard-Smithsonian Center for Astrophysics. He is a respected scholar of the life and work of Copernicus and is also a devout Mennonite. For him faith and science have never been at odds. Gingerich was invited in 2005 to give the William Belden Noble lectures at Harvard. His book is a distillation of those three lectures and reflects not only his wide experience and deep knowledge of physics but also a refreshing degree of intellectual modesty and humility.

In his lectures, Gingerich described his lifelong “love affair with the stars.” But his interests are wider than that, taking in physics, geology and the history of science, as well as astrophysics. He became interested in the way in which science fundamentally works, its claims to truth, and the relation of those claims to religious belief. He notes with fascination that today we still grapple with issues—concerning, for example, the interface of science and religion, and especially the role of scriptural literalism—that Copernicus, Kepler and Galileo wrestled with.

“So vast, without any question, is the Divine Handiwork of the Almighty Creator!”

And so Gingerich addresses the nature of science: it is more than a mere collection of facts. He writes that it could be described as “a grand tapestry woven together from facts and the hypotheses that unite these facts in an encompassing pattern of explanation.” He points out that “scientists work with physics, but (perhaps unwittingly) they also have a broader system of beliefs, metaphysics, a term that literally means ‘beyond physics.’”

His material presents a broad scientific picture of the physical world, but in addition he pursues the metaphysical framework within which the universe can be understood. Rather than dwell on the conflicts between science and religion, this astronomer believes that “the Judeo-Christian philosophical framework has proved a particularly fertile ground for the rise of modern science.”

In his first chapter, Gingerich asks, “Is mediocrity a good idea?” He then goes on to explain that mediocrity has been used as a scientific tool; that is, scientific progress will be made if we assume that everything we see in the universe is commonplace and therefore ordinary—an idea referred to as the Copernican Principle. According to this view, the earth is not particularly special, neither is our sun, nor our galaxy. And further, humankind is unlikely to be special either.

Gingerich can think of only four examples in the history of science where this principle could reasonably have been invoked to enhance scientific knowledge: 1) Copernicus and a sun-centered cosmos; 2) the size of the solar system; 3) the distance of stars from the solar system; and 4) the age of the universe. In three of the four examples, the Copernican principle was not invoked (it was with the third example). On the other hand, he shows that SETI, the search for extraterrestrial intelligence, rests on the bedrock of the Copernican principle: the universe might possibly be teeming with life like our own.

Why is this significant?

“Science works within a constrained framework in creating its brilliant picture of nature. But reality goes much deeper than this.”

The point Gingerich is keen to make is that mediocrity is quite possibly not a good idea. In a wide-ranging historical and scientific discussion, which takes in the complexities of the brain, the uniquely favorable qualities of iron, the nature of proteins, and humility in the face of the unknown, he remarks: “Mediocrity as a guide to understanding our place in the universe seems to me a generally unexamined ideology, and not one to which I would readily subscribe.” Humankind is truly extraordinary and could well be unique in the cosmos, though Gingerich is wise not to set “unwarranted human limitations on God’s creativity.”

He passionately believes that “the universe is a more coherent and congenial place” if it embodies “purpose and intention.” To him, a superintelligent Creator exists beyond and within the cosmos, and His design and purpose have resulted in a universe ideally suited to the existence of self-conscious life. The professor insists that this belief in no way detracts from his performance as a scientist.

By Accident or by Design?

Taking his argument further, Gingerich asks, “Dare a scientist believe in design?” In this spirited and compelling chapter, he discusses the age of the universe and its fine-tuning to sustain intelligent life, the intricacies of the big bang, six finger dwarfism and the discoveries of DNA, the deficiencies of Intelligent Design as a political movement, and the ramifications of the mysterious missing (or unstable) “mass five” that appears to be essential to our existence. This fascinating anomaly demands an old universe in order to create the conditions that allow the heavier elements to form, such as carbon and oxygen, on which life depends.

Gingerich ponders whether mutations can be inspired and a part of God’s miraculous hand continually at work. Did God design the universe in the first place to make possible the catalysts and unknown pathways that enabled the formation of life? He refers to such metaphysical questions as the “ideological watershed,” the division between atheistic evolution and theistic evolution, which lies beyond the abilities of science to resolve one way or the other.

Along the way, Dawkins comes under fire for using his scientific spokesmanship as “a bully pulpit for atheism.” Gingerich supposes that Dawkins, by his intemperate arguments, almost single-handedly makes more converts to Intelligent Design than any of that movement’s leading theorists.

“To me, belief in a final cause, a Creator-God, gives a coherent understanding of why the universe seems so congenially designed for the existence of intelligent, self-reflective life.”

In all this, Gingerich suggests the possibility that the universe was intentionally and intelligently designed and embodies purpose, though he readily accepts it may take the “eyes of faith” to accept such an idea. He acknowledges that demonstration of such design can offer only persuasion and not proof. He nevertheless firmly believes that God is the creator and sustainer of the universe. Espousing Galileo’s description of the Book of Scripture that illumines the pathway to God, and the Book of Nature that reveals a God of purpose and design, the professor again maintains that his belief makes him “no less a scientist.”

Gingerich next addresses “questions without answers.” Science owes its considerable success to choosing questions that it is able to answer. This inspired the professor to address questions that seem to defy an answer, the kind of philosophical questions that lie outside the purview of science. He draws on Aristotle’s distinction between an “efficient cause” and a “final cause” to illustrate his meaning. Scientists examine how things work (efficient causes), and they are often very good at sorting out such issues. But explanations of why things work (final causes) may lie beyond the grasp of science.

Believing that God created the universe and all life is an example, perhaps the ultimate example, of a final cause. Why He did so is a metaphysical question that relates to religious faith rather than to science. Gingerich, the man of faith, addresses numerous such “final cause” questions. But Gingerich, the man of science, wants to know how things have come to be, and his book bulges with fascinating insights and theories.

What are the “unanswerable questions” that Gingerich explores at length? These are perhaps the preeminent ones: Why is there something rather than nothing? Does the universe have a purpose, and is humankind part of that purpose? Why is the universe so comprehensible; is that part of its purpose too? Does evolution necessarily imply purposelessness? Or could small genetic mutations be “ordained by a spirit of purpose and intention?” What does it mean to be human? How does one explain the unique capabilities of humanity over all other life forms?

Gingerich is in no doubt that within the observable scheme of things there is “a theistic space, a perspective for viewing God’s universe, a universe where God can play an interactive role unnoticed by science, but not excluded by science.”

“It would take only small changes in numerous physical constants to render the universe uninhabitable. Somehow, in the words of Freeman Dyson, this is a universe that knew we were coming.”

The book is well summed up by its author: “I would prefer to accept a universe created with intention and purpose by a loving God, and perhaps created with just enough freedom that conscience and responsibility are part of the mix. They may even be part of the reason that pain and suffering are also present in a world with its own peculiar integrity. This, for me is God’s Universe.”

Gingerich’s book is both thoughtful and thought provoking. He is a gifted communicator, writing in clear, easy-to-understand terms about his complex field of study. Both believers and nonbelievers are likely to find his scientific and religious insights intriguing. By their very nature, of course, those insights may be controversial, depending on one’s point of view, but whether you end up agreeing or disagreeing with them, the author’s words and logic are well considered and compelling, and readers are bound to discover things they did not know.

But as Gingerich himself admits, some questions may simply be unanswerable: being spiritual in nature, they are beyond the scope of science, and the Bible may not address them directly either. This is surely in itself instructive. Curious though we may be to know the answers to all of life’s “unanswerable questions,” if science can’t answer them and the Bible doesn’t address them, might we reasonably conclude that this knowledge isn’t critical to our well-being? For example, just how God created this universe and why He created it the way it appears is not readily apparent from either science or the Bible. Neither do we know how God created life in the first place, nor exactly when or how the profusion of life apparent in the fossil record and extant today came to be. Truly the secret things belong to God (Deuteronomy 29:29), in which case, would it not be more profitable to concentrate on things we can know? God tells us that within the Bible we have been given “all things that pertain to life and godliness” (2 Peter 1:3).

We may not know how life began, but we are told very clearly how the life we have should be lived, the goal and purpose of human life, and its eventual outcome.