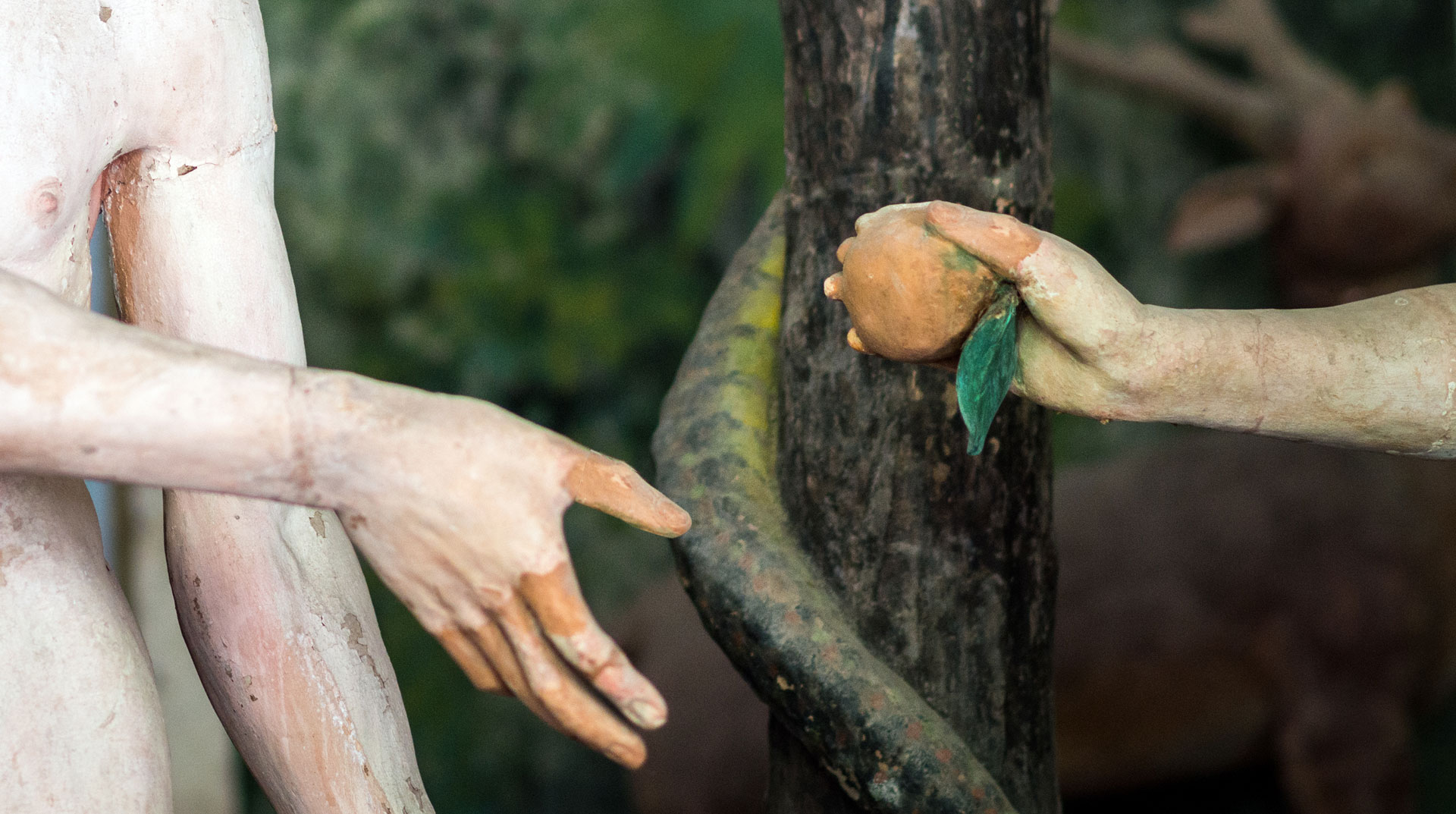 Augustine was challenged by the question that philosophers inevitably posed to Christians: “How could sin have entered the world, if God is good?” Augustine sought to answer this challenge and in so doing adopted many of the philosophers’ ideas.

The result, as evidenced by his writings, was that Augustine reinterpreted the Bible in light of philosophy. With respect to original sin, he understood the account of Adam and Eve as a description of humanity’s fall from grace. They sinned and were punished by God, and thus all subsequent humanity, being at that time biologically present within Adam, was party to the sin. The idea of innate sin and guilt became a widespread doctrine, as is shown by the following words from a popular American schoolbook used in the 17th and 18th centuries: “In Adam’s fall, we sinned all.”

But Augustine did not devise the concept of original sin. It was his use of specific New Testament scriptures to justify the doctrine that was new. The concept itself had been shaped from the late second century onward by certain church fathers, including Irenaeus, Origen and Tertullian. Irenaeus did not use the Scriptures at all for his definition; Origen reinterpreted the Genesis account of Adam and Eve in terms of a Platonic allegory and saw sin deriving solely from free will; and Tertullian’s version was borrowed from Stoic philosophy.

Though Augustine was convinced by the arguments of his earlier patristic peers, he made use of the apostle Paul’s letters, especially the one to the Romans, to develop his own ideas on original sin and guilt. Today, however, it is accepted that Augustine, who had never mastered the Greek language, misread Paul in at least one instance by using an inadequate Latin translation of the Greek original.

In Romans 5, Paul addresses the matter of sin. In verse 12 he states, “Therefore . . . sin came into the world through one man, and death came through sin, and so death spread to all because all have sinned” (NRSV). Later in the chapter, Paul juxtaposes the sin of Adam with the righteousness of Christ: “Just as by the one man’s disobedience the many were made sinners, so by the one man’s obedience the many will be made righteous” (Romans 5:19). In contrast to his contemporary theologians, Augustine drew from his reading of these scriptures that sin was passed biologically from Adam to all his descendants through the sexual act itself, thus equating sexual desire with sin. But why should he have reached this interpretation when marital sexual relations in Jewish society at the time of Christ and Paul were considered honorable and good?

Augustine’s outlook on sex was distorted by ideas from the world outside the Bible. Because so much philosophy was based on dualism, in which the physical was categorized as evil but the spiritual as good, some philosophers idealized the celibate state. Sexual relations were physical and therefore evil.

Augustine’s association with Neoplatonic philosophers led him to introduce their outlook within the church. This had its effect in the development of doctrine. For example, Jesus was considered immaculately conceived—without sin in that His Father was God. But because His mother, Mary, had a human father, she suffered the effect of original sin. In order to present Jesus Christ as a perfect offspring without any inherited sin from either parent, the church had to find a way to label Mary as sinless. They did this by devising the doctrine of her immaculate conception, though this inevitably leads to further questions.

Other babies were not so fortunate. Some eight centuries later the Catholic theologian Anselm extended the implications of Augustine’s concept of original sin and claimed that babies who died, did so as sinners; as sinners, they had no access to eternal life but were condemned to eternal damnation.

The world from which Paul came had a very different view of sexual relations, especially within marriage. Sex was not evil; it was part of the physical creation that God had decreed was good (Genesis 1:31). The writer of the Epistle to the Hebrews supports this view in describing the marital bed as “undefiled”—that is, pure or sacred; in other words, the sexual act did not impair a person’s relationship with God (Hebrews 13:4). The apostle Paul takes the idea further in his First Epistle to the Corinthians, where he instructs married couples not to defraud one another but to render appropriate conjugal dues. He states that in the sexual relationship each partner should focus on providing benefit to the other, not just on his or her own satisfaction. Hence Augustine’s view of sex as sin does not match New Testament teaching. Nor does it coincide with the Old Testament statement that a child does not carry its father’s sin (Ezekiel 18:19–20).

Further, Paul would have rejected Augustine’s idea of biological transmission. Paul presents a scenario in which humanity is held captive by a spirit being who enslaves them to sin (2 Corinthians 4:4–6; Ephesians 2:1–2). According to Paul, the entire world is held captive to “the prince of the power of the air,” or Satan. Paul mentions that the human spirit can be subject to either the spirit of the world or the Spirit of God (1 Corinthians 2:6–14). He also warns Christians that their battle with sin is against spiritual, not physical, forces (Ephesians 6:10–18).

When Paul speaks of sin “entering” the world, he is addressing the fact that Adam willingly submitted himself to Satan’s already sinful nature, something that Jesus Christ also confronted but rejected (Matthew 4:3–11; Romans 5:19). By this act Adam ensured that his progeny would be under Satan’s rulership and influence. Hence in Psalm 51 the author speaks of being conceived in sin. It was not that the act of conception was sin but rather that as a result of conception, he was to enter a world in slavery to sin.

So Paul saw sin within a spiritual domain rather than a biological one. This is reinforced later in his Epistle to the Romans, where he describes humanity as being in a state of bondage to spiritual forces (Romans 6:13–23). The choice for Christians is to become servants of Jesus Christ, something that can be done only through God’s Holy Spirit. It is an individually chosen responsibility rather than a hereditary one.

In his commentary titled The Mystery of Romans, Mark Nanos contrasts the action of Jesus Christ with that of Adam, stating that “unlike Adam [Jesus] did not embrace the voice of the tempter, he did not ‘eat,’ as it were. He heard the word of God, believed, and obeyed.”

Jesus Christ came to replace Satan as the ruler of the world, so that sin, by which humanity is enslaved, could be removed (Romans 16:20). Such freedom is accorded to those God draws to His Son now, but it will be accorded to all who are willing after the return of Jesus Christ. This was one reason the early Church eagerly anticipated Christ’s return—so that all humanity could benefit.

Clearly Augustine’s Neoplatonic, dualistic concept of physical being evil and spiritual being good does not coincide with Paul’s view. This leads us to a second influential idea of Augustine’s relating to sin. He proposed the concept of the “fall of man” as a result of sin. In Augustine’s view, humanity lost its spiritual relationship with its Creator and thus fell to a lower state. Is this an idea that finds support in Paul’s writings?

Paul certainly recognized the lack of a spiritual relationship and saw sin resulting in death (Romans 6:15–18). He saw the world alienated from its Creator (Ephesians 2:12; 4:18), a condition that could be corrected only by the intervention of God. But Paul also saw an opportunity for humanity to be restored to a right relationship with God after losing access to Him in the Garden of Eden. However, this could happen only by becoming a “new creation” in God’s hands. Rather than describing the human condition as “fallen,” Paul may well have thought of the situation as a failure to “rise” to what God had offered. He describes those who reject the truth once they have had a relationship with God as having fallen away (Galatians 5:4, NRSV).

Paul’s view corresponds with the rest of the biblical account in that Genesis records that Adam and Eve were denied access to the tree of life, which would have afforded them eternal life. Thus, although they were cut off or alienated from God because of sin and driven from the Garden of Eden, they had never really engaged the relationship with God that He desired, which would have been accomplished only by eating of the tree of life.

Tragically, Augustine’s misreading and misinterpretation of sin based on looking at Scripture through the prism of dualism is accepted as dogma by most contemporary Christian theologians. The doctrine of original sin owes more to Augustine’s desire to emulate the philosophers than it does to the Scriptures.