In many parts of the world today, when we turn on a tap we expect clean, drinkable water to pour out in abundance. When we click online or visit the supermarket to do our grocery shopping, we expect convenience and variety.

Beyond taps, water pipes and vacuum-sealed, prepackaged foods, however, lies a highly organized food chain subject to a complex nexus of social, economic, political, ecological and climatic factors that hang together in a delicate balance.

We’re used to seeing the breakdown of the food chain in poorer parts of the world. But what would happen if the food and water supply suddenly shut off across the developed world? Or if, in apparently affluent countries, a day arrived when there was enough for me living here, but not for you living there?

A new book, Food or War, “zeroes in on an issue that touches every single human life, every single day: food. And the fact that, without it, we usually fight.”

How many glasses of water or square meals would each of us have to forgo in succession before we and our governing officials were willing to take radical or even violent steps?

Eating the Planet to Death?

Julian Cribb, an Australian author and science writer, has written yet another book on the global threats facing humanity. As the title denotes, the theme of this new work is the stark choice that lies before us: food or war. He writes, “The human jawbone is the most destructive implement ever to appear. It is presently devouring the Earth.”

One of our species’ most widely known foundational stories could be thought of as relating to that jawbone. It begins in a garden—a garden where the first humans stretched out their hands and opened their mouths to devour a piece of forbidden fruit. In the 21st century we’re still stretching out our hands to satisfy our every craving. And yet, Cribb writes, “the need to keep [our jawbone] fed is responsible, every year, for the loss of up to 75 billion tonnes of topsoil, the wasting of six trillion tonnes of water, the release of five million tonnes of pesticides, and 30 per cent of the world’s climate-wrecking carbon emissions.” In addition, some argue that our seemingly insatiable appetite for meat exacerbates the carbon problem and is the reason behind fires that raged through the Amazon in 2019.

Via the blood-red skull and “crossbones”—a crossed knife and fork—on the cover, Cribb emphasizes how critical humanity’s life-or-death choice is. While some might initially decry his approach as alarmist, the book makes a strong case for just how tenuous a situation we’re all in if the global food chain takes a serious hit.

Some of the greatest threats lie in the Middle East, Africa and parts of Asia, particularly where the population continues to explode. Yet the danger of food and water shortages is potentially global; Cribb points out that we may be looking at peak population in this century of around 10 billion.

How can we possibly feed that many people? The present agricultural system will simply not support them, he maintains. Using existing methods to turn up the volume on production is likely to cause more issues than it resolves. Cribb likens it to “Josef Stalin shooting more farmers in his attempts to increase food production.”

“Trying to solve the global food problem by intensifying agriculture worldwide using fossil fuels, fertilisers and petrochemicals . . . will only destroy the very climate, resources and ecosystem services on which agriculture, itself, depends.”

He makes his point in a digestible though scary (and therefore initially unpalatable) way. Yet we will all need to swallow the facts at some point.

The tendency in the West is to view famine as a problem of the poor, or one created solely by those nations whose population is growing fastest. Yet while increasing numbers of people and a rising middle class in Asia and Africa will strain production, it is not the world’s poor who are eating the planet. According to Oxfam, Cribb writes, “just one tenth of humanity consumes five times as much in the way of material resources . . . as the poorest half of the world population.” One of the book’s clearest messages is that we and our massive agri-corporations look to the earth to provide us with its finite resources indefinitely—as if those resources were like money, where a government can simply print more on demand. 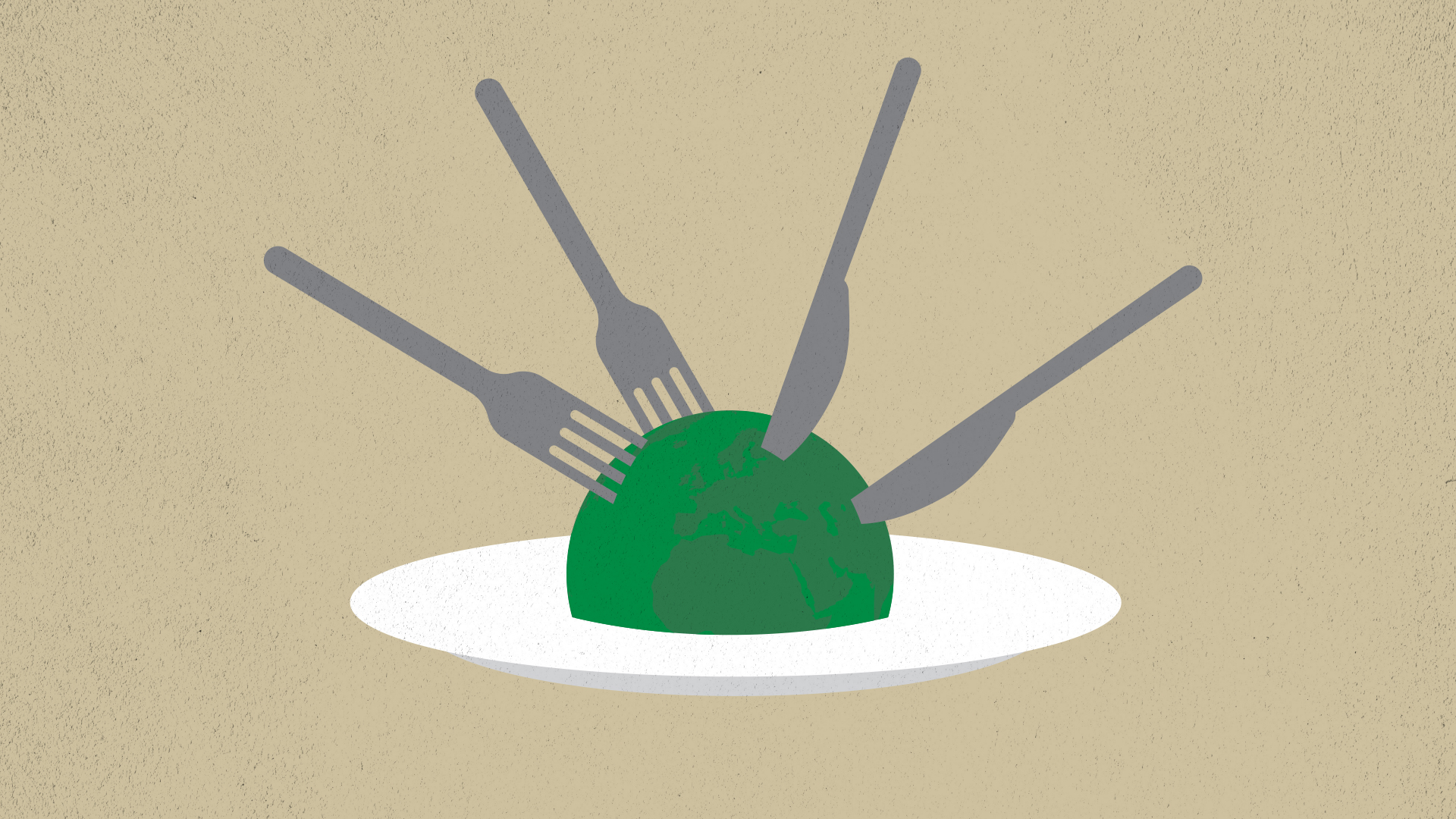 Because food production is largely done in an outdoor environment, there’s also no escaping the negative effect of temperatures inching upward. Further, Cribb writes, some estimate that 70 percent of the topsoil of our planet, the layer used for growing plants, is gone, and that we have about 60 years of topsoil left. Not all experts agree, it should be noted. For example, Achim Dobermann, director of Rothamsted Research in the United Kingdom, told Vision, “I don’t think this is scientifically very credible.”

The implications of Cribb’s sobering thesis go beyond a future lack of resources. In his startling opening, he claims that “in recent centuries, more people have perished during wars from hunger than have died through direct military action. And more wars have originated in the fear and hatred which lack of fair access to food, land and water generates among contending cultures, creeds, classes, tribes and nations, than from other causes.” While we’re familiar with the fact that war often brings famine in its wake, one of Cribb’s key arguments is that a lack of food, water or access to land are also primary drivers of war.

To represent these dire interactions, the author draws on the imagery of the Four Horsemen in the book of Revelation, who symbolize false saviors (and their attendant bad ideas), famine, war, and pestilence and death. He highlights famine as central to the others. In light of the interconnected nature of these threats to human existence, it’s a profound point. The perennial presence of flawed ideas adopted throughout history by leaders such as Stalin, for example, often inflame the other problems.

Cribb notes that for obvious reasons we have a habit of building cities and establishing farms near major rivers, but some of these have been so heavily tapped that they’re now under threat of drying up; he cites China’s Yellow River, though South Asia’s Indus, the Colorado in the American West, and others around the world are also vastly diminished.

Throughout history, river valleys and fertile plains made possible the fueling of vast armies such as those of Rome and Carthage, which could (and did) violently secure more land as deemed necessary. A lack of adequate food likewise lit the fuse of previously peaceful Scandinavian peoples; known to us as the Vikings, they armed themselves and took to their ships in ravenous pursuit of new territory. Food availability was also integral to the Russian and French revolutions. Cribb even presents fears about food security as a string in the post-Weimar Republic fiddle that Hitler played so well; he convinced the German people that the Lebensraum (space for living) they sought, in part as a guarantee against future hunger, lay to the east. Cribb’s book is thus a fascinating historical tour through not only the idea of war leading to famine but also famine as a reason to go to war and even as a weapon of warfare—German U-Boats sinking Allied merchant ships, for example, or the Allied blockade of Germany in the First World War.

While Cribb’s argument is thought-provoking, some historians may counter that its linear focus on food is somewhat reductive. Still, his case that it is a contributing factor is compelling and warrants his additional focus.

If the book’s contention is correct—that people have historically gone to war less for political and cultural reasons than for securing food, water and land resources—then the future of war is unlikely to be any different. As populations burgeon, particularly in those nations where males outnumber females, a loss of food and water could easily be a catalyst for all-out war.

Regarding the Middle East, Cribb says it isn’t a question of whether it will run out of water but when. Equally, he wonders, could diminishing water levels in northern China—with its still-growing population—lead to cataclysm? China may present its extensive buying up of farms and land outside China as benign business initiatives or as benevolent aid, he argues, but if the wheat harvest to the north of the Yangtze River or the rice harvest to the south can no longer provide sufficiently for the Chinese people, that foreign soil would likely be used to feed China alone.

Cribb outlines “cross-cutting solutions” for the mounting threats to a sustainable food supply. His hope is to divert humanity from its potentially catastrophic path. Practical initiatives include leveraging the ocean surface for microalgae and seaweed growing; pursuing safe bioculture solutions; and ensuring that urban areas and megacities become self-sufficient through vertical growing, recycling, waste repurposing, and other such schemes.

Cribb has also called for reallocating 20 percent of nations’ military budgets to agriculture to help prepare for tomorrow’s world. His analogy is the familiar idea of turning swords into plowshares. The concept derives from a prophecy in the book of Isaiah concerning a future time when all peoples will stop learning warfare and instead turn their focus to food production.

“Humanity needs a new definition of ‘weaponry’—one more akin to the ploughshare than the sword.”

Food, Cribb contends, is a weapon we should be wielding to prevent war—and therefore, properly managed and developed, should be a force for peace. Part of his vision includes the creation of an army of “Stewards of the Earth,” those with an intimate understanding of the soil locked up in their heads and hands. He sees this as a more viable option than E.O. Wilson’s idea of extending the earth’s nature reserves to half the surface of the land and sea.

Ironically, the idea of stewardship chimes with the story of those same first humans who reached up to satisfy their appetite for a piece of forbidden fruit; but they had been instructed to “dress and keep” the garden, to cultivate and protect it—and, by implication, the entire earth.

For Cribb, our future relation to food and the earth is finally a moral question. It begins at the individual level: as consumers, we can choose to rule our selfish instincts and powerfully influence the future of our species (more, even, than via our carbon footprint) by choosing wisely what to put our jawbones to work on, and by valuing and remunerating farmers more than we tend to do. He believes a revolution is already underway in our global village, powered by the Internet and social media. He compares this awakening to a fetal brain switching on: “We are in the process of creating a universal, Earth-sized ‘mind.’”

He envisions a new, purer form of democracy, unfettered by the short-term focus of elected politicians. Foreseeing a role for all the religions of the world, he suggests that the pope, “by calling on his fellow Catholics to protect the Earth which sustains us in his encyclical Laudato Si, . . . provided a shining example of how religious beliefs can be refocussed on human survival—an example many other leading faiths have since begun to adopt.” He also notes that Hollywood’s movie themes and prominent actors are alerting humanity to the risks at hand.

Such efforts can go some way toward addressing the problem, of course, but can they cure the moral malady that underlies it? Rejecting war in favor of sustainable food production is really a spiritual challenge arising from the warring motivations and desires of the human heart: self-interest, power, greed on the one hand; love, peace, contentment on the other. This suggests that the solution, too, must be spiritual in nature. Our human nature, with its conflicting appetites and passions, will have to undergo a complete change before we can all agree to turn our swords into plowshares.