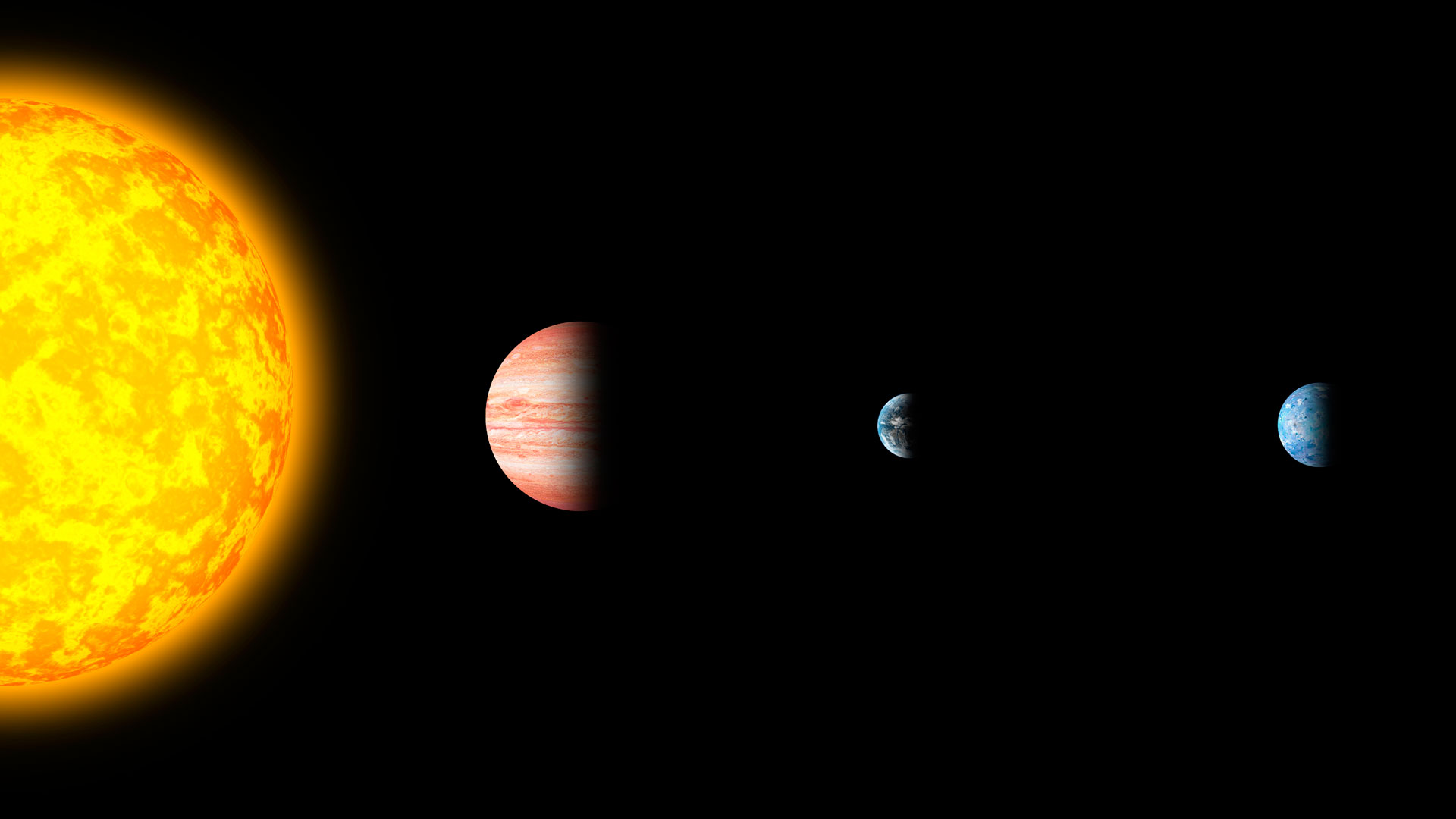 Like a nighttime soap opera, the dramatic search for another earth added a new episode in April. Corresponding to the 39th anniversary of Earth Day in the United States, astronomers at the European Southern Observatory (ESO) announced their discovery of a small, apparently Earth-like planet orbiting the star Gliese 581. This red dwarf star (called an M star to designate its cool temperature, only about 40 percent the brightness of the Sun) is located 20.5 light-years away in the constellation Libra.

From that distance, if Glieseans existed and could see us now, they would be viewing our past: the transition of the U.S. presidency from Ronald Reagan to George H.W. Bush would probably be at the top of their “news from Earth.” Details concerning the structure of planets at such a distance are vague at best. While more than 300 extrasolar planets, or exoplanets, have been discovered since 1995, most of them have been gas giants similar to Jupiter because these are easiest to “see.” Relatively small planets similar to the rocky Earth are the obvious goal of our searching, but detecting their presence has been difficult.

“It is amazing to see how far we have come since we discovered the first exoplanet around a normal star in 1995—the one around 51 Pegasi,” says Michel Mayor, Geneva Observatory, Switzerland. Mayor led the ESO team. “The mass of Gliese 581 e is 80 times less than that of 51 Pegasi b. This is tremendous progress in just 14 years.”

According to the ESO press release, astronomers analyzed the system’s motion, as revealed by its spectrum, to learn more about the new planet and to refine their knowledge of the previously discovered Gliese 581 d’s orbit. The planets are not themselves visible to us; they are only known by their gravitational effect on the star. “The gentle pull of an exoplanet as it orbits the host star introduces a tiny wobble in the star’s motion—only about 7 km/hour, corresponding to brisk walking speed—that can just be detected on Earth with today’s most sophisticated technology. Low-mass red dwarf stars such as Gliese 581 are potentially fruitful hunting grounds for low-mass exoplanets in the habitable zone. Such cool stars are relatively faint and their habitable zones lie close in, where the gravitational tug of any orbiting planet found there would be stronger, making the telltale wobble more pronounced. Even so, detecting these tiny signals is still a challenge, and the discovery of Gliese 581 e and the refinement of Gliese 581 d’s orbit were only possible due to HARPS’s unique precision and stability.”

While Gliese 581 e is too close to the star to have liquid water and is therefore not within the habitable zone of the system, it appears that the larger Gliese 581 d has moved into the area that might maintain conditions right for life. The scientists believe that “d” is too large to be a rocky planet and therefore likely formed farther out in the system. Team member Stephane Udry, of Geneva University, speculated that “it is an icy planet that has migrated closer to the star” and noted that “‘d’ could even be covered by a large and deep ocean—it is the first serious ‘water world’ candidate.”

In their paper, “The HARPS Search for Southern Extra-solar Planets,” the scientists explain their hope to eventually find truly Earth-like planets in the habitable zones of other stars. “Our HARPS surveys search for low-mass close-in planets around stars with masses from 0.3 to over 1 solar-mass.”

The goal is not only to gather more evidence of planets beyond the solar system, but also to understand how those planets came to be. The paper concludes, “The numerous multi-planetary systems which they will detect will provide stimulating constraints for formation scenarios.”

Astronomer Marc Ollivier echoes this sentiment in Planetary Systems: Detection, Formation and Habitability of Extrasolar Planets (2009): “The challenge is . . . to create a model for star formation that would take account of the properties of the newly discovered planetary systems, but also to ensure that the Solar System could be incorporated as a specific case within the overall model.”

Might we discover ourselves out of existence? It would indeed be a scientific shame if in all of our searching we could conclude only that the earth was impossibly unique. But that failure of science would not be the end of the world. It could indeed lead our thinking in new directions. The more we see of the universe, the more the earth does appear unique—not as a planet, for there are many; not as existing within a measureable “habitable zone,” for planets such as Gliese 581 d may well be common. Life, or evidence of life, may well be found on another planet, but there will remain something completely different happening here: the drama of human life.

Have we simply “lucked out”? Evolutionary science and those skeptical of any First Cause say yes. We are here, they insist, because life is common in the universe, and somehow, in a way not yet understood, consciousness can arise spontaneously because, after all, here we are. Models that impart a sense of purpose to creation, to our individuality and our capacity to communicate and create, are simply not scientifically acceptable today. To believe the prophet who once claimed there is a Being who created the earth not in vain but “formed it to be inhabited” (Isaiah 45:18) is not part of any acceptable model.

So we continue to search—as we should, for there is nothing wrong with knowing more—but only for physical evidence to prove a surprisingly nearsighted vision. “The holy grail of current exoplanet research,” Mayor says, “is the detection of a rocky, Earth-like planet in the ‘habitable zone’—a region around the host star with the right conditions for water to be liquid on a planet’s surface.”

Out across the light years we may yet find confirmation of Mayor’s “holy grail.” But, just as a soap opera will not give valuable insight into real human relationships, finding another earth will not help us understand our place in the universe. Concerning that question, there are places closer to home that can reveal much more to the open-minded observer.