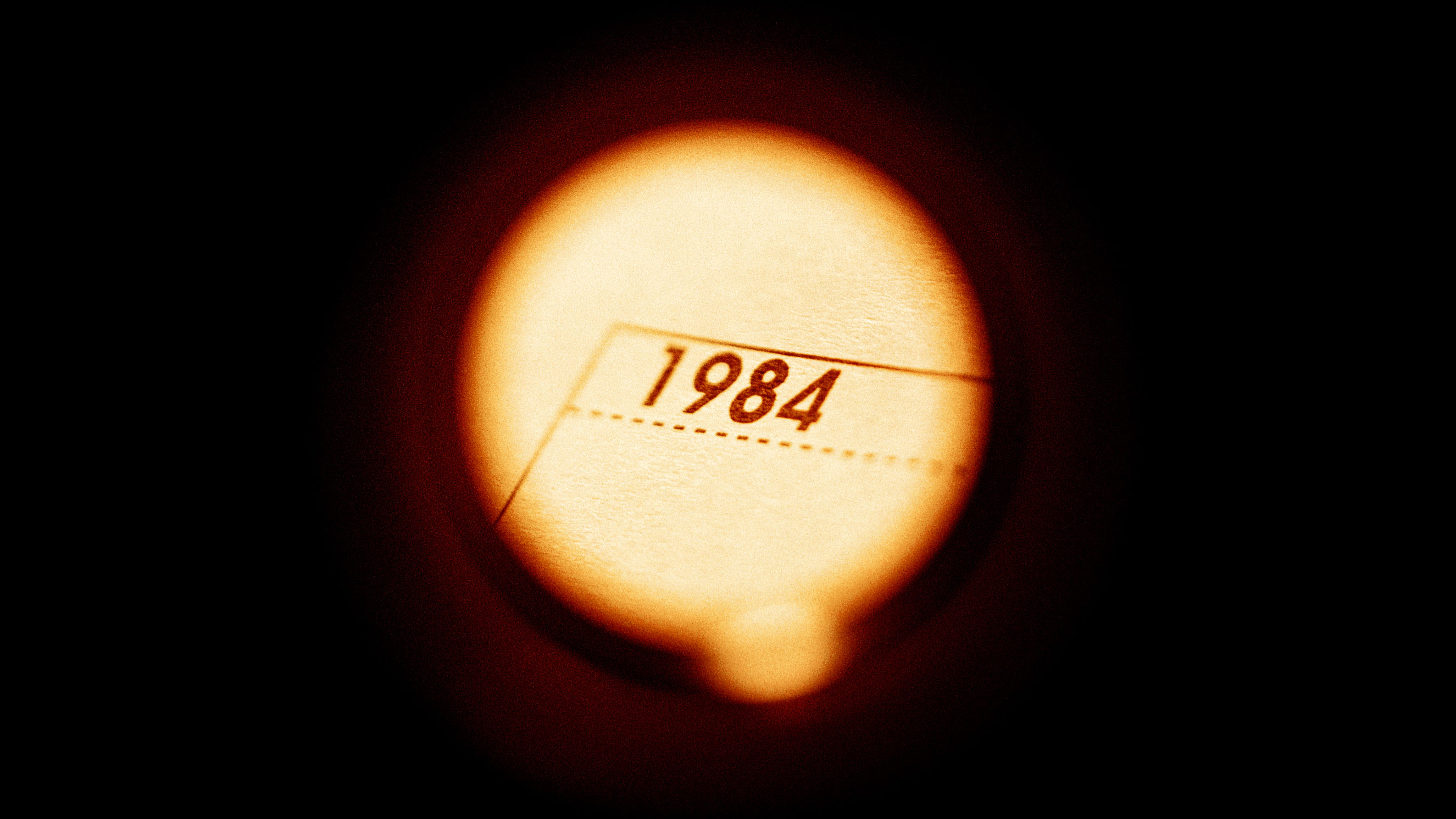 How Eric Arthur Blair, son of a minor official in the Opium Department of the province of Bengal, India, became George Orwell is something that has never been entirely clear. However, Orwell was the name of a Norfolk village not far from his family’s home in Southwold as well as a river in Suffolk, which ran by the home of relatives with whom he had stayed. Orwell may have borrowed his first name from writer George Gissing whose work he greatly admired.

However it came about, George Orwell was his preference out of four names he offered Victor Gollancz for his pseudonym when his first book was accepted for publication. When his publisher agreed, George Orwell he became.

Various life experiences undoubtedly played their part in producing what is possibly Orwell’s best known-work, Nineteen Eighty-Four, which still has the ability to shock some 60 years after it was first published.

The story is set in a world divided into three roughly equal, constantly warring power blocks, one of which is Oceania and includes the United Kingdom, now known as Airstrip One. Winston Smith is an unhealthy, middle-aged underling of the Party who seeks to undermine its pervasive influence, which includes subjecting the population to 24-hour surveillance in order to control their every thought and ensure the Party’s purity. Figurehead leader of this oligarchic system is the omnipresent and omnipotent Big Brother.

The absent presence of Smith’s mother is woven through a considerable portion of the cloth from which Nineteen Eighty-Four is cut, and some effects of the early disappearance of a parent can be seen in the author’s own life too. Orwell’s father remained in India after an outbreak of the plague prompted his mother to move Orwell and his older sister back to England when he was only a few months old. By the time Richard Blair retired in 1912, Orwell was away from home for much of the year, boarding at St. Cyprian’s school in Eastbourne, Sussex. So it was only during holidays that the youngster could try to acquaint himself with the somewhat elderly father he had never known. While Orwell respected his parent, he found it difficult to warm to a man who could be somewhat gruff and seemed to feel children should be seen and not heard.

At around 18 months of age Orwell suffered a bad attack of bronchitis and was confined to bed for a week. Respiratory ailments were to be a recurring problem throughout his life, a condition not helped by five years in India’s tropical climate as a member of the Indian Imperial Police force, a case of dengue fever, a heavy smoking habit and, at times, an almost willful disregard for his own well-being. He would refuse to wear warm clothing in cold weather, often lived in cold, damp dwellings, and exposed himself to filthy and often contaminated conditions living among the impoverished.

This resulted in a number of hospital admissions and his eventual death from pulmonary tuberculosis on January 21, 1950, at the age of only 46.

His bronchial condition was something the author seems to have felt compelled to share with Winston Smith, who would be “doubled up by a violent coughing fit which nearly always attacked him soon after waking up. It emptied his lungs so completely that he could only begin breathing again by lying on his back and taking a series of deep gasps.” One has the feeling that this was written by someone who had himself been reduced to just such a disabled state.

As he grew, however, health problems did not stop Orwell from enjoying the great outdoors, first in walks with his mother and later in adventures with a group of boys. In later years he could amaze both young and old with his knowledge of wildlife, an interest he maintained until the end of his days.

The wondrous countryside of his childhood was something he would draw on in his later writings and juxtapose with the much bleaker world he saw man creating.

From age 8, Orwell went to school at St. Cyprian’s. Living away from home was a rude shock for a boy from a poorer background who had to fit in with 80 other boys, some from very wealthy families. The headmaster often found ways to remind him of his family’s less-privileged position and suggested he would undoubtedly prove an academic failure, a factor that contributed toward the sense of guilt and lack of self-worth with which Orwell struggled for much of his life.

The general lack of approval evinced by his family for his later decisions—first, to join the Indian Imperial Police in 1922, and then, five years later, to leave again in order to become a writer—only added to this sense of guilt and failure, as did his relative lack of success during his early years as a writer.

Orwell was able to masterfully transfer his own air of self-doom to Winston Smith, a man of unprepossessing appearance who was laden with guilt about the circumstances surrounding his mother’s disappearance. When Smith began to more actively resist Big Brother’s pressure to conform, he did so in the full knowledge that he was embarking on an enterprise that would undoubtedly fail. As he began his secret diary, Smith “was tempted to tear out the spoiled pages and abandon the enterprise altogether. He did not do so, however, because he knew that it was useless. . . . Whether he went on with the diary, or whether he did not go on with it, made no difference. The Thought Police would get him just the same. He had committed . . . the essential crime that contained all others in itself. Thoughtcrime, they called it.”

Orwell became an avid reader at an early age, devouring such authors as Rudyard Kipling (a must in any Anglo-Indian home), Jonathan Swift, H.G. Wells and Charles Dickens.

He couldn’t resist giving Smith the same interest—“There was a small bookcase in the other corner, and Winston had already gravitated towards it” —a highly suspect predilection in the heavily censored world of Nineteen Eighty-Four. Indeed, it was through a book—his diary—that Smith’s challenge to Big Brother’s authority began.

Gradually young Orwell added a rather eclectic mix of interests to his love of books. These ranged from angling to guns and explosives to the compiling of lists.

His childhood lists of dates, metaphors, jargon words, books, poets and writers gave way to other matters in adult life, most controversially a list revealed after his death that enumerated those he thought were likely subversives.

A somewhat contradictory streak in Orwell’s nature was particularly evident in his attitude toward women. On the one hand he very much craved their company. Yet the fact that he might be dating (or even married to) a particular woman did not in any way secure his sexual fidelity toward her.

A number of people commented on this aspect of Orwell’s character. Biographer Gordon Bowker quotes Orwell's later friend, Stephen Spender, who went so far as to say, “Orwell was very misogynist. I don’t know why. [He] was a strange sort of eccentric man full of strange ideas and strange prejudices. One was that he thought women were extremely inferior and stupid. . . . He really rather despised women.”

Whether or not that last statement was entirely true, most would probably not argue with describing as “eccentric” and “strange” a man who could reserve his weekends for the woman he intended to marry, while sleeping with someone else during the week.

True to form, it was certainly not long before the author turned Smith’s Nineteen Eighty-Four meeting with Julia into a sexual encounter. Indeed, this was how Orwell intended them to rebel against Big Brother: “Anything that hinted at corruption always filled [Winston] with a wild hope,” Orwell wrote. “Anything to rot, to weaken, to undermine!” Justifying sexual promiscuity by turning it into a political weapon in this way strongly hints at the unfettered yet guilt-laden state of the author’s own mind in this area.

Orwell is best remembered for his keen eye for societal distinctions. This is clearly seen in Nineteen Eighty-Four, though it is certainly evident in his other writings too, most particularly Animal Farm. The class-conscious Edwardian society in which he grew up, as well as the colonial system he came to loathe in India, is very clearly represented in the societal structure of his fictional Oceania: “At the apex of the pyramid comes Big Brother. . . . Big Brother is the guise in which the Party chooses to exhibit itself to the world. . . . Below Big Brother comes the Inner Party. Its numbers limited to six millions, or something less than 2 per cent of the population of Oceania. Below the Inner Party comes the Outer Party, which, if the Inner Party is described as the brain of the State, may be justly likened to the hands. Below that come the dumb masses whom we habitually refer to as 'the proles', numbering perhaps 85 per cent of the population.”

If the excesses of totalitarian governments clearly appalled him, so too did the blindness of populations to the danger such governments posed.

While traveling through northern England in 1936 against the backdrop of a Europe in ferment, with Hitler’s Germany retaking possession of the Saarland, Mussolini’s Italy invading Abyssinia, and a left-wing takeover in Spain, Orwell found workers attending a rally of Sir Oswald Mosley’s British Union of Fascists largely supportive of what Orwell called his “barren” pronouncements. Orwell concluded Homage to Catalonia, his novel of the Spanish Civil War, by lamenting that in his homeland “all [were] sleeping the deep, deep sleep of England, from which I sometimes fear that we shall never wake till we are jerked out of it by the roar of bombs.”

The danger Orwell keenly sensed in these totalitarian movements was something he came to experience in a very personal way when his writings were vehemently denounced by Stalinist-backed communists. The bullet Smith came to expect in the back of his head at any moment in Nineteen Eighty-Four was something Orwell viewed as an all-too-real possibility for himself. The murder of one-time communist revolutionary architect Leon Trotsky, in far-away Mexico, did nothing to allay his fears.

In his essay “Looking Back on the Spanish Civil War,” written in 1943, Orwell clearly revealed that in looking at the present he could already see the world of Nineteen Eighty-Four in his mind’s eye. “Nazi theory . . . specifically denies that such a thing as ‘the truth’ exists,” he wrote. “The implied objective of this line of thought is a nightmare world in which the Leader, or some other ruling clique, controls not only the future but the past. If the Leader says of such and such event, ‘It never happened’—well it never happened. If he says that two and two are five—well, two and two are five. This prospect frightens me more than bombs.”

One can almost see Winston Smith at his desk in the Ministry of Truth receiving another small cylinder of paper with directions on the latest news item to be “rectified.”

But we are now a generation on from the title date of a book that was itself published even farther back, in 1949. So can the final work of this complex and sometimes contradictory man still have anything to say to the world of the 21st century? The fact that there is no shortage of human rights violations reported regularly across the globe would seem to indicate a positive answer to that question.

Perhaps Orwell himself best encapsulated the message of Nineteen-Eight-Four in his 1939 essay on Charles Dickens. “The central problem—how to prevent power from being abused—remains unsolved,” he wrote. He concluded: “[The assertion that] ‘if men would behave decently the world would be decent’ is not such a platitude as it sounds.”