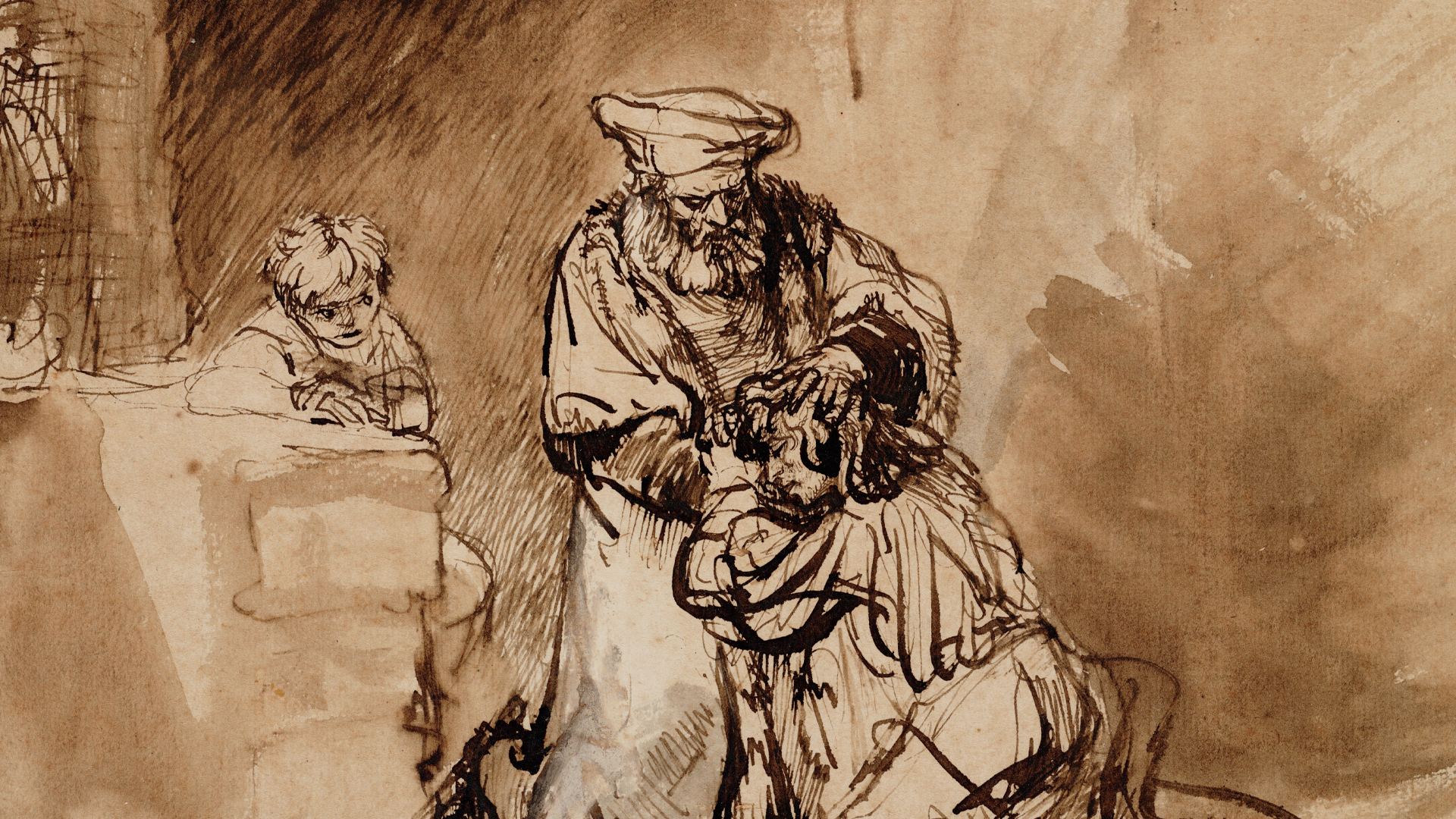 When we think about loving our neighbors, what comes to mind? Is it enough to sympathize with their plight, or to express sorrow for their lot in life?

In fact, sympathy alone is of little use to someone who is suffering; it doesn’t change anything.

To extend love to others requires that we first understand something about their needs. That means trying to put ourselves in their shoes. In the case of people we already have a relationship with, it may mean we observe and ask questions to better understand their situation. In a more general sense, we may need to educate ourselves about a group whose needs or circumstances may be different from our own—those who are part of another generation, another nationality, another ethnic group, another socioeconomic class.

This is empathy—to do what’s in our power to better understand another person’s situation, and to consider what it must be like to walk a mile in his or her shoes. But is that enough?

Really loving our neighbor also requires that, once we understand something about another person’s pain, we do what we can to ease it or to somehow lighten the burden. This is where empathy is transformed into compassion.

The following collection of excerpts from the New Testament provides a standard of compassion through both the exemplary life of Jesus and some of His well-known parables. It’s worth noting that His compassion was often directed toward complete strangers, and that He willingly associated with and helped people whom the religious leaders of the day looked down on.

While we may not have the power to perform miracles, Jesus’ example makes it clear that we should be willing to help others in whatever way is in our power. Sometimes that means simply praying for them. Depending on the situation, it may also mean helping to feed them when they’re hungry, or reaching out to them when they’re sick, or just being there when they need someone to listen—whatever we can reasonably do to ease their burden.

1. The Compassion of Jesus

“Then Jesus went about all the cities and villages, teaching in their synagogues, preaching the gospel of the kingdom, and healing every sickness and every disease among the people. But when He saw the multitudes, He was moved with compassion for them, because they were weary and scattered, like sheep having no shepherd. Then He said to His disciples, ‘The harvest truly is plentiful, but the laborers are few. Therefore pray the Lord of the harvest to send out laborers into His harvest’” (Matthew 9:35–38, emphasis added throughout).

“Jesus . . . departed from there by boat to a deserted place by Himself. But when the multitudes heard it, they followed Him on foot from the cities. And when Jesus went out He saw a great multitude; and He was moved with compassion for them, and healed their sick. When it was evening, His disciples came to Him, saying, ‘This is a deserted place, and the hour is already late. Send the multitudes away, that they may go into the villages and buy themselves food.’

“But Jesus said to them, ‘They do not need to go away. You give them something to eat.’

“And they said to Him, ‘We have here only five loaves and two fish.’

“He said, ‘Bring them here to Me.’ Then He commanded the multitudes to sit down on the grass. And He took the five loaves and the two fish, and looking up to heaven, He blessed and broke and gave the loaves to the disciples; and the disciples gave to the multitudes. So they all ate and were filled, and they took up twelve baskets full of the fragments that remained. Now those who had eaten were about five thousand men, besides women and children” (Matthew 14:13–21).

“Now Jesus called His disciples to Himself and said, ‘I have compassion on the multitude, because they have now continued with Me three days and have nothing to eat. And I do not want to send them away hungry, lest they faint on the way.’

“Then His disciples said to Him, ‘Where could we get enough bread in the wilderness to fill such a great multitude?’

“Jesus said to them, ‘How many loaves do you have?’

“And they said, ‘Seven, and a few little fish.’

“So He commanded the multitude to sit down on the ground. And He took the seven loaves and the fish and gave thanks, broke them and gave them to His disciples; and the disciples gave to the multitude. So they all ate and were filled, and they took up seven large baskets full of the fragments that were left. Now those who ate were four thousand men, besides women and children” (Matthew 15:32–35).

4. The Parable of the Unforgiving Servant

“Then Peter came to Him and said, ‘Lord, how often shall my brother sin against me, and I forgive him? Up to seven times?’

“Jesus said to him, ‘I do not say to you, up to seven times, but up to seventy times seven. Therefore the kingdom of heaven is like a certain king who wanted to settle accounts with his servants. And when he had begun to settle accounts, one was brought to him who owed him ten thousand talents. But as he was not able to pay, his master commanded that he be sold, with his wife and children and all that he had, and that payment be made. The servant therefore fell down before him, saying, “Master, have patience with me, and I will pay you all.” Then the master of that servant was moved with compassion, released him, and forgave him the debt.

“‘But that servant went out and found one of his fellow servants who owed him a hundred denarii; and he laid hands on him and took him by the throat, saying, “Pay me what you owe!” So his fellow servant fell down at his feet and begged him, saying, “Have patience with me, and I will pay you all.” And he would not, but went and threw him into prison till he should pay the debt. So when his fellow servants saw what had been done, they were very grieved, and came and told their master all that had been done. Then his master, after he had called him, said to him, “You wicked servant! I forgave you all that debt because you begged me. Should you not also have had compassion on your fellow servant, just as I had pity on you?” And his master was angry, and delivered him to the torturers [jailers] until he should pay all that was due to him.

“‘So My heavenly Father also will do to you if each of you, from his heart, does not forgive his brother his trespasses’” (Matthew 18:21–35).

“Now as they went out of Jericho, a great multitude followed Him. And behold, two blind men sitting by the road, when they heard that Jesus was passing by, cried out, saying, ‘Have mercy on us, O Lord, Son of David!’

“Then the multitude warned them that they should be quiet; but they cried out all the more, saying, ‘Have mercy on us, O Lord, Son of David!’

“So Jesus stood still and called them, and said, ‘What do you want Me to do for you?’

“They said to Him, ‘Lord, that our eyes may be opened.’ So Jesus had compassion and touched their eyes. And immediately their eyes received sight, and they followed Him” (Matthew 20:29–34).

“Now a leper came to Him, imploring Him, kneeling down to Him and saying to Him, ‘If You are willing, You can make me clean.’

“Then Jesus, moved with compassion, stretched out His hand and touched him, and said to him, ‘I am willing; be cleansed.’ As soon as He had spoken, immediately the leprosy left him, and he was cleansed” (Mark 1:40–42).

7. Jesus Raises the Son of the Widow of Nain

“Now it happened, the day after, that He went into a city called Nain; and many of His disciples went with Him, and a large crowd. And when He came near the gate of the city, behold, a dead man was being carried out, the only son of his mother; and she was a widow. And a large crowd from the city was with her. When the Lord saw her, He had compassion on her and said to her, ‘Do not weep.’ Then He came and touched the open coffin, and those who carried him stood still. And He said, ‘Young man, I say to you, arise.’ So he who was dead sat up and began to speak. And He presented him to his mother” (Luke 7:11–15).

8. The Parable of the Good Samaritan

“And behold, a certain lawyer stood up and tested Him, saying, ‘Teacher, what shall I do to inherit eternal life?’

“And He said to him, ‘You have answered rightly; do this and you will live.’

“But he, wanting to justify himself, said to Jesus, ‘And who is my neighbor?’

“Then Jesus answered and said: ‘A certain man went down from Jerusalem to Jericho, and fell among thieves, who stripped him of his clothing, wounded him, and departed, leaving him half dead. Now by chance a certain priest came down that road. And when he saw him, he passed by on the other side. Likewise a Levite, when he arrived at the place, came and looked, and passed by on the other side. But a certain Samaritan, as he journeyed, came where he was. And when he saw him, he had compassion. So he went to him and bandaged his wounds, pouring on oil and wine; and he set him on his own animal, brought him to an inn, and took care of him. On the next day, when he departed, he took out two denarii, gave them to the innkeeper, and said to him, “Take care of him; and whatever more you spend, when I come again, I will repay you.” So which of these three do you think was neighbor to him who fell among the thieves?’

9. The Parable of the Lost Son

“Then He said: ‘A certain man had two sons. And the younger of them said to his father, “Father, give me the portion of goods that falls to me.” So he divided to them his livelihood. And not many days after, the younger son gathered all together, journeyed to a far country, and there wasted his possessions with prodigal living. But when he had spent all, there arose a severe famine in that land, and he began to be in want. Then he went and joined himself to a citizen of that country, and he sent him into his fields to feed swine. And he would gladly have filled his stomach with the pods that the swine ate, and no one gave him anything.

“‘But when he came to himself, he said, “How many of my father’s hired servants have bread enough and to spare, and I perish with hunger! I will arise and go to my father, and will say to him, ‘Father, I have sinned against heaven and before you, and I am no longer worthy to be called your son. Make me like one of your hired servants.’”

“‘And he arose and came to his father. But when he was still a great way off, his father saw him and had compassion, and ran and fell on his neck and kissed him. And the son said to him, “Father, I have sinned against heaven and in your sight, and am no longer worthy to be called your son.”

“‘But the father said to his servants, “Bring out the best robe and put it on him, and put a ring on his hand and sandals on his feet. And bring the fatted calf here and kill it, and let us eat and be merry; for this my son was dead and is alive again; he was lost and is found”’” (Luke 15:11–24).