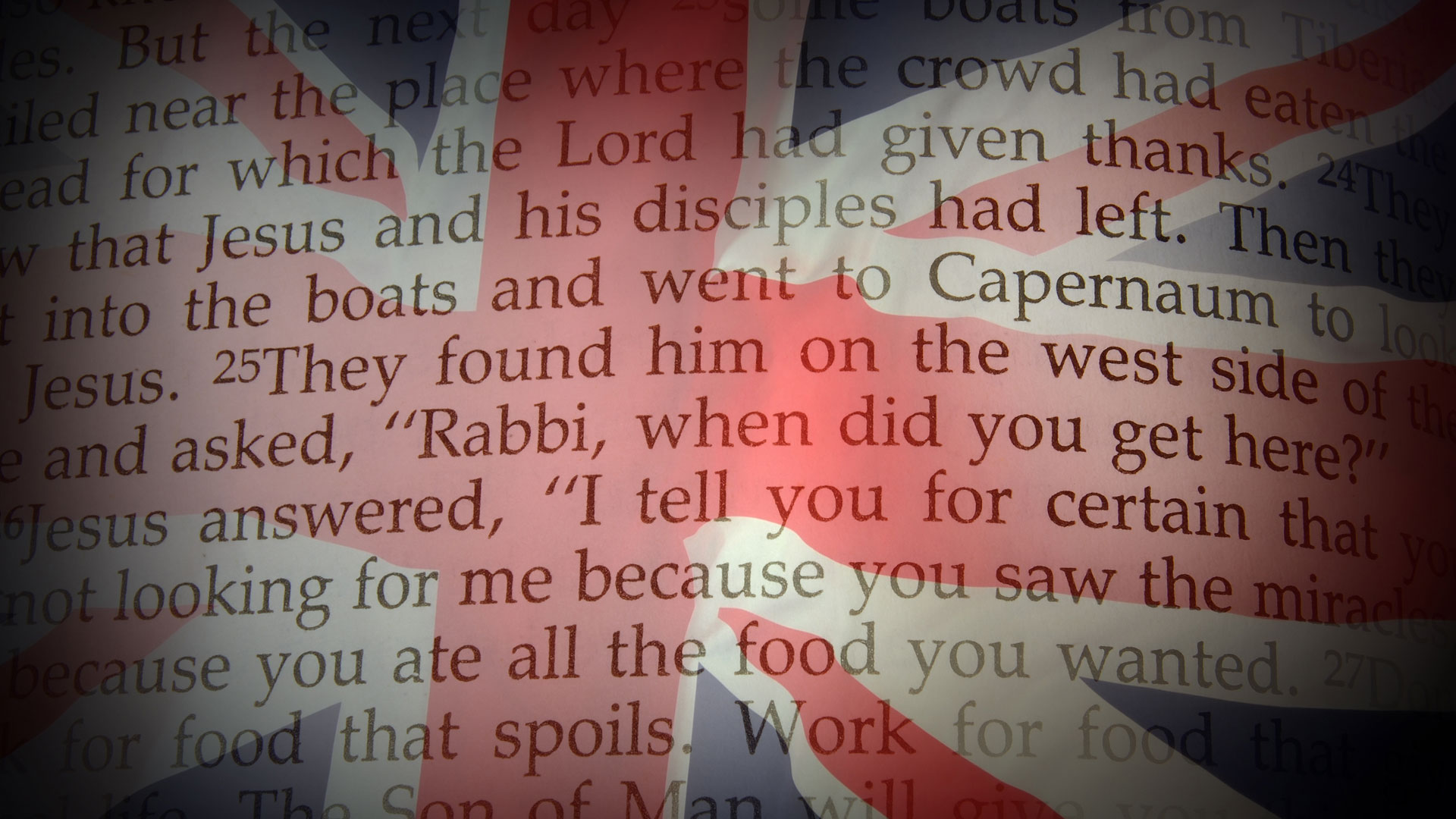 The association of the British monarchy with the Bible is nowhere better demonstrated than in the coronation ceremony of Queen Elizabeth II more than 50 years ago. The queen placed her hand on a Bible as she knelt and promised before God to perform her solemn oath. She then kissed the book and signed the oath.

The ceremony continued as these words were spoken to her: “Our gracious Queen: To keep your Majesty ever mindful of the Law and the Gospel of God as the Rule for the whole life and government of Christian princes, we present you with this Book, the most valuable thing that this world affords. Here is Wisdom; this is the Royal Law; these are the lively Oracles of God.”

Defender of the Faith

A strange twist of history makes the British monarch not only the head of state but the head of the Church of England as well. The same historic events have much to do with the religious freedom many enjoy today, and with how the English-language Bible came to be widely distributed.

The first Queen Elizabeth inherited the title Defender of the Faith from her father, Henry VIII. A grateful pope had rewarded the young king with the title for writing a book that attacked Martin Luther (or more probably commissioning others to do so in his name). The title was passed from monarch to monarch and is now borne by Queen Elizabeth II. The initials F.D., standing for the Latin Fidei Defensor, are imprinted on British coins.

The faith that Henry was defending was, of course, the Roman Catholic faith. However, when he sought to annul his marriage to his first wife, Catherine of Aragon, in order to remarry and produce a male heir, Pope Clement VII failed to respond. The pope evaded the issue for seven years for both theological and practical reasons. At the practical level, Catherine was the aunt of the mighty Holy Roman Emperor Charles V, and the pope feared to cross him.

Henry turned against the pope and secretly married Anne Boleyn in January 1533. On the king’s orders, the compliant Archbishop of Canterbury, Thomas Cranmer, declared the marriage with Catherine null and void in May of that year. In September, Anne gave birth to a daughter, Elizabeth. Anne’s next pregnancy miscarried, and in 1536 she gave birth to a stillborn boy. Anne was executed at Henry’s behest four months later for adultery and incest, although the charges are generally considered to have been trumped up. Elizabeth was the only surviving child of the union. Henry went on to marry four more wives in succession.

The Bible and the Reformation

In order to achieve his ends, Henry had torn the English church away from Rome in 1534. Though he maintained many of his theological beliefs, he inadvertently added an unstoppable momentum to the Protestant Reformation he had fought so hard against a decade earlier. Henry created the Anglo-Catholic Church of England, with himself at the head, for which the pope excommunicated him. The dissolution of the monasteries followed, and Rome’s iron grip was broken.

[Henry VIII] inadvertently added an unstoppable momentum to the Protestant Reformation he had fought so hard against.

Prior to Henry’s break with Rome, Bible translator William Tyndale, working from Germany, had published an English New Testament. In spite of repression by the English church and government, the first copies reached England in 1526. Only one intact copy is known to have survived, discovered in 1996 in a Stuttgart library. This paucity reflects the fierceness of the onslaught of opposition against these English New Testaments, many of which were burned.

Tyndale believed that everyone who wished to read the Bible in his own language should be able to do so, and that the Bible alone should determine the doctrines and practices of the church. His work, commissioned by English merchants, alienated him from the Roman church and the European religious establishment, which at the time included English clerics. Before he could complete his translation of the Old Testament, Tyndale was seized in Belgium and, in 1536, burned at the stake for heresy. It is probable that Henry’s former Lord Chancellor, Sir Thomas More, had instigated the betrayal and seizure prior to his own death in 1535.

The Geneva Bible followed, crafted by Protestants who had fled during the short reign of the Catholic queen, “Bloody Mary” (1553-58). Henry’s daughter by Catherine of Aragon. The Calvinist exiles drew heavily on the prior work of Tyndale and, after the death of Mary and the accession of her half-sister Elizabeth, the Geneva Bible became the popular and most accepted English-language version. It was loaded with provocative, antimonarchy marginal notes, however, and it consistently translated “king” as “tyrant” (which made it understandably popular in the American colonies).

Owing to the Geneva Bible’s partisan flavor, an official version was commissioned during Elizabeth’s reign. This came off the presses in 1568 and became known as the Bishops’ Bible, because most of the scholars involved were bishops. Beautifully printed, it was nonetheless an overworked, unpopular dud, infamously translating “cast thy bread upon the waters” as “lay thy bread upon wet faces.”

Queen Elizabeth I died in 1603 after a reign of 45 years. The Elizabethan period proved to be a golden age of literature and the English language. The plays of Shakespeare are a high-water mark of literature unsurpassed to this day.

There was also a heightened interest in Scripture. The preface of the modern-day New King James Version comments: “Although the Elizabethan period and our own era share in zeal for technical advance, the former period was more aggressively devoted to classical learning. Along with this awakened concern for the classics came a flourishing companion interest in the Scriptures, an interest that was enlivened by the conviction that the manuscripts were providentially handed down and were a trustworthy record of the inspired Word of God.”

Thus, although Elizabeth’s Scottish cousin and successor, James I, commissioned the King James translation of the Bible, it was the period of his predecessor that was the springboard for what became recognized as a monument to the English language. In 1604 James gathered 50 or so scholars together under the leadership of the Archbishop of Canterbury to create a new English translation of the Bible.

The resultant King James Version became the authoritative and defining English-language Bible. It ensured that the truth of Scripture could be opened up in the common tongue of the English-speaking world, and by 1769 it replaced the Geneva Bible in popularity in both the United States and Britain. Though it has undergone a number of revisions (the most recent being the New King James Version, which is very much in the tradition of the original), it is to this day respected as one of the most accurate translations.

It remains to be seen whether the strong association of the British monarchy with God’s Word will continue in what is now officially seen as a post-Christian society.

It is unlikely that the living oracles will feature quite so prominently in Britain’s next coronation.

It will also be interesting to see what role the Bible, and indeed the Church of England, will have in such a regal occasion as the next coronation. Prince Charles declared in 1994 that, on succession, he would amend the title Defender of the Faith to Defender of Faith to reflect the varied religions extant in today’s multicultural Britain and the Commonwealth. Given that intention, although Charles is a religious man with Catholic leanings, it is unlikely that the living oracles will feature quite so prominently in Britain’s next coronation.