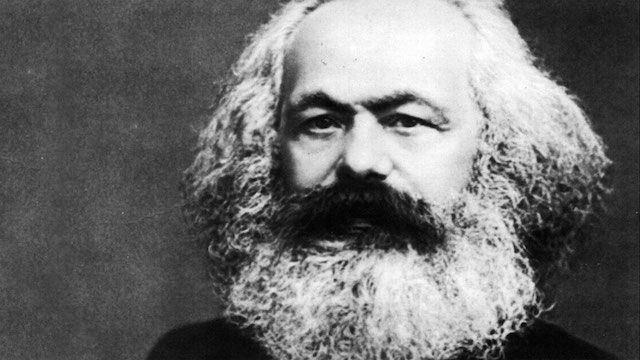 Karl Marx was born in Trier, Prussia (now Germany), in 1818 and died in London, England, in 1893. He died before his political ideologies saw the light of day, but their influence on both economic theory and philosophy has been profound throughout the 20th century.

Born into a Jewish family, he was baptized a Protestant because of the persecution of Jews at the time. His background propelled him into active liberal philosophy, and in 1842, with a newly granted doctorate from the University of Jena, he founded a newspaper in Cologne to promote his philosophy.

Within two years the newspaper encountered violent opposition and Marx angrily retreated to Paris, where he took up his lifelong association with Friedrich Engels. Two years later, when it became clear that their journalism and philosophy were not acceptable in Paris either, they moved on to Brussels, where Marx concentrated on scholarly refutations of socialist papers circulating around the continent.

In 1848 he and Engels founded the Communist League, and Marx wrote Communist Manifesto. The dramatic reception this received emboldened the pair to go onward to Cologne to resurrect the newspaper that Marx had edited half a dozen years before. Marx was shortly arrested and the pair expelled for their subversive political activities. Marx considered himself an exile and moved to London, where he lived for the rest of his life.

In 1864 he founded—and subsequently dominated—the International Working Men's Association, known in communist literature as “the First International.” He published the first volume of his most memorable work, Das Kapital, in 1867.

The starting point for Marxist philosophy, and the basis of Das Kapital, is the observation that, in general, the world revolves on a capitalist economy wherein people with money hire people without money to make things and provide services. Marx observed that capitalism is self-defeating and predicted that class distinctions would become wider and wider. He proposed that capitalism should be replaced with a system where work is performed for the common good rather than for money provided by a privileged class—in other words, he proposed communism.

Marx entertained little doubt that his ideal system could come about only by jettisoning everything valued by Western society.

He believed that virtually everything had to change, and he entertained little doubt that his ideal system could only come about by jettisoning everything valued by Western society. He further proposed that this new system should be implemented by means of a revolution at the grass-roots level of society, or the proletariat, as he called it.

Marx, like the 18th-century philosopher Rousseau, insisted that ideologies—in fact, the rules of culture and government in general—are formulated primarily to suppress the poorer classes and should be forcibly abandoned.

Like Rousseau, Marx believed that human nature is basically good and only becomes corrupted by “these evil institutions” of society. Unlike Rousseau, Marx did not see education as the solution; he envisaged social and economic upheaval. Where Rousseau had espoused individual integrity in his philosophy, Marx preached collective action and suppressed individuality. Despite his religious background, Marx had no use for formal religion; to him it was just more suppressive ideology in a different form, designed to keep the lower classes in subjection.

Marx’s anger and bitterness spilled over into his writings and swayed fellow radicals to take up the cause. Marx and Engels were both superb polemicists. Though the two men were never able to accomplish the social and economic revolution they advocated, their philosophy (modified by Lenin) was taken up as the system to replace the Russian monarchy, and so Soviet communism was born in the early years of the 20th century.

As the century draws to a close, however, it is apparent that Soviet communism has failed; Chinese communism has adopted capitalist tendencies; Cuban communism is shrouded with self-imposed isolation. Many observers of these events conclude that Marxist communism, whatever its merits, simply has not worked.

Marx believed that the problem with the socialism of his day was that it did not deal with economic issues. He proposed that his new (communist) economic system, which called for redistribution of wealth, was more equitable. But it is clear that this system does not work either, at least in part because it requires people to be altruistic. Unfortunately, working for the benefit of others over the self is not in harmony with the current state of human nature. Marx advanced a secular solution to what is a spiritual problem. But by its very nature, a spiritual problem can be solved only at a spiritual level.