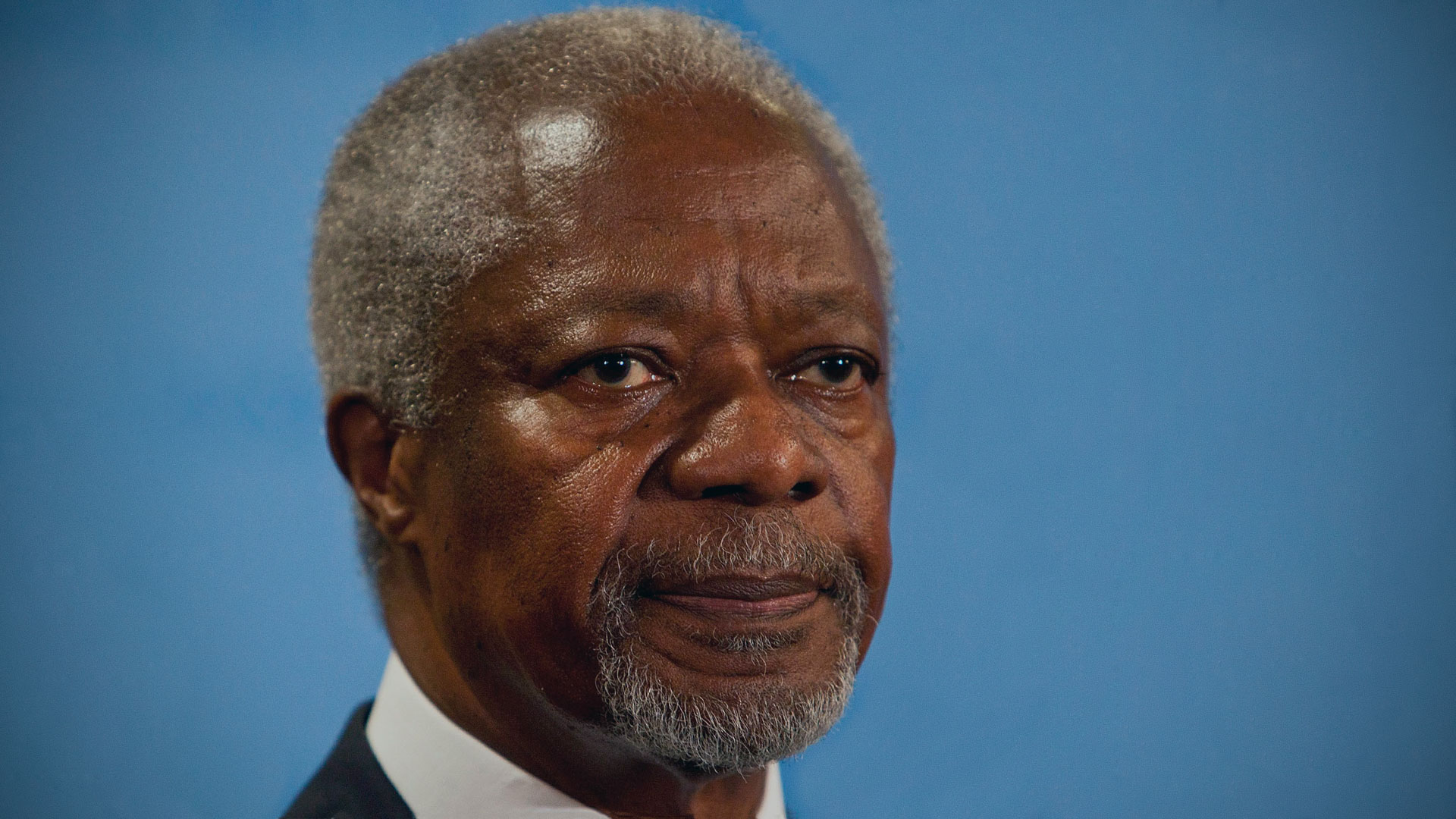 Kofi Annan, the seventh Secretary-General of the United Nations, served from 1997 to 2006. The first black African to hold the position, Annan was also the first appointee to emerge from within the ranks of the organization.

Kofi Atta Annan was born on April 8, 1938, in Kumasi, Gold Coast, the West African nation that became Ghana after independence in 1957. His parents, Henry Reginald and Victoria Annan, followed African tradition in naming him Kofi Atta and his twin sister, Efua Ataa. In the Akan language, Kofi and Efua are the male and female equivalents of “born on Friday,” while Atta/Ataa means twin. The name Annan comes down from his grandfather, the original bearer of this name, and indicates that this man was a fourth consecutive son.

As a youngster he was sent to attend the old Methodist boarding school, Mfantsipim. Years later he would look back and acknowledge the enormous impact some of his teachers had on his life. One in particular took the time to illustrate that there is often more than one side to a story and more than one answer to a question. When receiving the 1998 World Methodist Peace Award in New York City, Annan explained how he benefited from this lesson in later years: “To make peace between warring parties, to convince fighters to lay down their arms, and tyrants to give up their tyranny, it is critical to see conflicts in all their complexity. To make peace, we may sometimes have to shake the hands of aggressors and lend our ears to voices of enmity. For in the words of the late Yitzak Rabin, ‘We make peace not with our friends, but with our enemies.’”

Annan went on to study at the University of Science and Technology in Kumasi, Ghana, and completed his undergraduate work in economics at Macalester College in St. Paul, Minnesota, in 1961. Here another lesson was learned as the African was introduced to North American winters: “Never walk into an environment and assume that you understand it better than the people who live there” (as quoted in Macalester Today, November 1994.)

In 1962 he joined the U.N. as an administrative and budget officer with its agency, the World Health Organization, in Geneva. Subsequently, he served with the Economic Commission for Africa in Addis Ababa, then the U.N. Emergency Force in Ismailia, before returning to Geneva to work with the United Nations High Commissioner for Refugees (UNHCR).

In 1965 Annan married Nigerian Titi Alakija. The couple had two children, a daughter named Ama and a son named Kojo.

After taking time out in the early 1970s to earn a Master of Science degree at the Massachusetts Institute of Technology, Annan, returned home in 1974 to take a job as Ghana’s Director of Tourism. A couple of years later he rejoined the UNHCR operation in Geneva, eventually serving as Deputy Director from 1980 to 1983.

A year after his marriage to Titi Alakija broke up in 1980, he met Nane Lagergren, a divorced Swedish lawyer, and now artist, who also worked for the UNHCR at the time. Following his divorce and a move to the U.N. headquarters in New York in 1983, the two were married at the U.N. chapel in New York in 1984.

At the U.N. headquarters, Annan served in various senior posts dealing with human resources, budget, finance and staff security. In 1993 he was appointed Under-Secretary-General for Peacekeeping by then U.N. Secretary-General Boutros Boutros-Ghali, and later served as Special Representative of the Secretary-General to the former Yugoslavia, earning praise for the smooth transition of peacekeeping operations there from U.N. to NATO control.

There were difficulties and setbacks along the way, however. The so-called U.N. “safe havens” failed to prevent ethnic cleansing in Bosnia, and the capture of U.N. peacekeepers there and their use as human shields only added to the organization’s troubles. In 1994 the horrendous carnage in Rwanda between Hutus and Tutsis was accompanied by accusations that Kofi Annan’s office had failed to heed prior warnings of the impending massacre. However, as Secretary-General, Boutros-Ghali took most of the criticism for any failings there had been in the way the U.N. handled these situations.

Annan’s appointment as Secretary-General in 1997, for the first time put someone in charge who had an in-house understanding of the various layers and branches of the U.N. Its near bankrupt condition and lack of credibility at the time of his appointment certainly made it in need of someone who appreciated what changes were needed to transform the organization.

He immediately began implementing a series of reforms to streamline the UN’s administration. This gave it the cohesion and resilience it needed to meet the many demands it would face in the following years. This renewed sense of purpose also gave a much-needed boost to staff morale.

His firm, yet noncombative, low-key style gained him the respect of friend and foe alike in the decade that followed. This was exemplified by his 1998 visit to Iraq where, against all expectations, he negotiated a resolution to an impasse between that country and the U.N. Security Council over compliance with resolutions involving weapons inspections and other matters, thereby preventing hostilities. This only made the later war with Iraq a greater disappointment, something he voiced when announcing the withdrawal of U.N. staff from Iraq, in March of 2003: “In the sense that we are not able to do it peacefully, obviously it is a disappointment and a sad day for everybody. War is always a catastrophe. It leads to major human tragedy. . . .”

Annan became a constant advocate for human rights, particularly those of women, seeking to “make the U.N. an organization that serves people, and treats them as people—that is, individual human beings, not abstractions or mere components of a state,” as he explained to an audience in New York City in December, 2006. To that end, as Secretary-General, he played a central role in the creation of the Global Fund to fight AIDS, Tuberculosis and Malaria.

He has also been an ardent advocate of the rule of law concept. Speaking in the United Kingdom in 2006, he said, “No society can long remain secure, or prosperous, without respect for human rights and the rule of law.” These are issues he has continued to highlight since leaving office.

Gareth Evans, President of the International Crisis Group, speaking in Paris in October of 2005, observed that a major factor in the “dramatic decline in the number of armed conflicts since the early 1990s” was “the revitalization of the U.N. system.” Although many other individuals, agencies, institutions and governments also played a part, including the previous U.N. Secretary-General, Annan must be given some credit for what happened on his watch.

Besides the difficulties involved in working through the many contentious disputes that arose during his tenure, including the American-led invasion of Iraq in 2003, Annan also became embroiled on a personal level when an inquiry, led by former U.S. Federal Reserve Chairman Paul Volcker, criticized the U.N. for mismanagement of its oil-for-food program in Iraq, a mechanism designed to allow Iraq, under sanctions at the time, to sell oil for essential food and medicines for its people.

Although the report of the inquiry committee did acknowledge that “there is no evidence that the Secretary-General participated or intervened in the bidding or negotiation process,” it went on to say that the subsequent “inquiry initiated by the Secretary-General was inadequate” and that “the Secretary-General should have referred the matter to an appropriate United Nations department . . . for a thorough and independent investigation.” The inquiry committee also found that his son, Kojo, had “intentionally deceived” Annan about his ongoing financial relationship with the Swiss firm that had been awarded the contract to monitor this program, something that “deeply saddened” him.

Campaigning for Policies for the Poor

Since leaving the post as U.N. Secretary-General, Annan has continued to campaign for policies to meet the needs of the poor and the vulnerable, particularly in Africa. The Kofi Annan Foundation now lends support to this effort, aiming to utilize his skills and expertise by providing leadership on critical global issues, encouraging peace through mediation and the forming of partnerships with other organizations that share the same goals.

In October 2007 Annan also created and launched the Global Humanitarian Forum, which aims to maximize the performance of the humanitarian system as a whole by strengthening ties between the various international bodies with offices in Geneva, Switzerland.

These two organizations are both headquartered in Geneva, where Annan began his U.N. career so many years ago. His affinity with the city is such that Switzerland’s vote in 2002 to join the United Nations has been credited, in part, to the favorable impression made there by Kofi Annan.

Annan accepted a post on the Board of Directors of the United Nations Foundation in October of 2007, is Chancellor of the University of Ghana, and chair of several other initiatives: the Africa Progress Panel, the Alliance for a Green Revolution in Africa and the Prize Committee of the Mo Ibrahim Foundation.

Ever eager to establish dialogue and cooperation between diverse peoples, Annan, speaking in Kuala Lumpur in 2007, noted that mistrust between different religions was hindering this process: “. . . the problem is not the faith; it is the faithful and how they behave towards each other.”

Man’s behavior towards his fellows is governed by law and, as he has consistently pointed out, it is man’s failure to adhere to the rule of law that lies at the root of the problem. In accepting the Nobel Peace Prize, which he was jointly awarded with the U.N. in 2001, Kofi Annan said that those who “undermine the rule of law and violate the rights of . . . citizens . . . become a menace not only to their own people, but also to their neighbors, and indeed the world.”

The difficulty, of course, lies in knowing whose law should prevail?