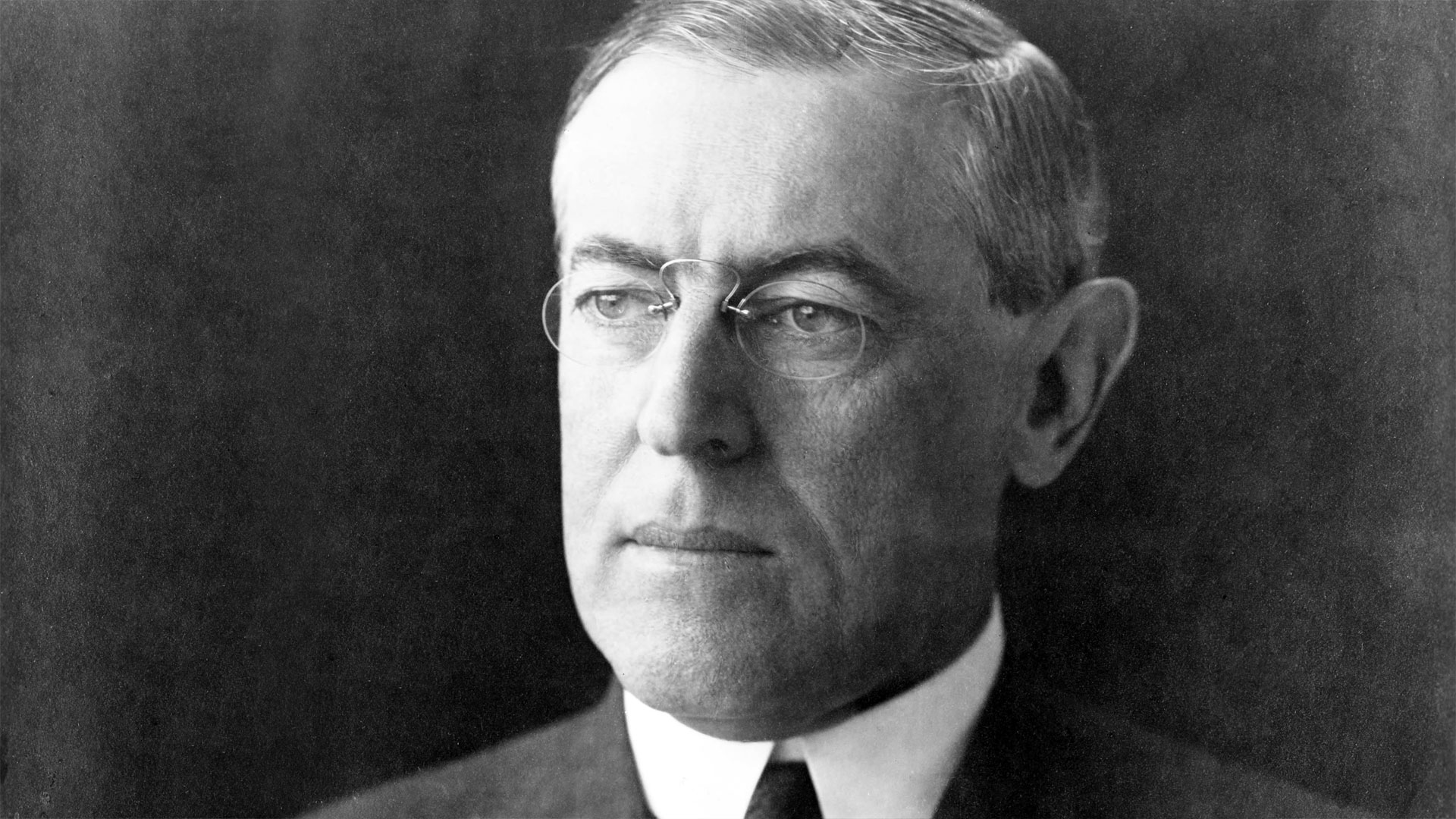 Thomas Woodrow Wilson is perhaps best remembered for his devotion to the cause of world peace in the formation of the League of Nations.

He achieved much more, however, during his two-term presidency. In an era of progressive idealism, he pushed the emerging United States onto the world stage. And his famous appeal to Congress as he took his country into world war in 1917 still reverberates: “The world must be made safe for democracy.” Ironically, democracy was much more threatened after Germany’s surrender, as a result of the punitive peace the Allies forced on it. Nonetheless, Wilson’s ideals survived the century of wars, and his promotion of national self-determination has largely won the day.

In an era of progressive idealism, Wilson pushed the emerging United States onto the world stage.

Wilson came from mainly Scottish parentage—19th-century emigrants to the United States. The first son and third child of Presbyterian minister Joseph Wilson and his wife, Janet, he was born in Virginia in 1856. Young Woodrow experienced some of the horrors of the Civil War and remained a Southerner his entire life, believing that the South had nothing to apologize for.

As a youth, Wilson became a lover of English literature and history. He also took an early interest in politics and in the great essayists and orators of the English language. Earning degrees from the College of New Jersey and the University of Virginia law school, Wilson established himself as a lawyer in 1882. He returned to academics a year later, enrolling in a doctoral program in history at Johns Hopkins University.

In 1885, Wilson married Ellen Louise Axson, and together they raised three daughters. Apparently Ellen was the perfect match for the sensitive Wilson, providing a lively and cultured atmosphere in their home.

He received his doctorate in 1886, after which he taught history and published well-received books on politics and American government. In 1890 he returned to the College of New Jersey (soon to become Princeton University) as professor. This was the base on which an unexpected political career would be built.

In 1902 his five-volume History of the American People was published to popular acclaim. Later that year, by a unanimous vote, Wilson became president of Princeton, and in 1906 the editor of Harper’s Weekly proposed him as Democratic contender for America’s presidency.

A newcomer to the pursuit of elected office, Wilson was willing to change some of his more conservative positions in order to make himself a more appealing Democrat. Having won the endorsement of party leaders in New Jersey, he set himself on a reformist course to become governor. The progressive mood in the nation brought Wilson a major election victory in November 1910. He was in the right place at the right time. Despite his aristocratic demeanor, he had been able to inspire the people with his oratorical brilliance. He had once said that he looked for some great orator who could inspire Americans to display once again the spirit of self-sacrifice that had characterized the nation at its birth. Now, it seemed, Wilson’s own day had come. Still, all of this was merely preparation for a run in the next U.S. presidential election.

By 1912 Wilson was well known across the country, having made every effort to accept speaking opportunities to further his cause. Carefully avoiding alliances with old money, he presented his progressive agenda to the nation with good humor and patriotic charm. It was another winning combination: by November 1912 he had secured the nation’s highest office against the fading appeal of Theodore Roosevelt and William Howard Taft.

During his first term, Wilson achieved significant reforms in the agrarian, industrial and financial sectors. The Federal Reserve System and the Federal Trade Commission were created on his watch. Farm loan reform and child labor laws were enacted. The president was slow to support women’s right to vote, however, and he failed to advance the rights of the black population, allowing racial segregation in federal offices.

In August 1914 Wilson was devastated by the death of his wife. He was already given to frequent illness and fatigue, and the strain of loss made matters worse. Yet in the months that followed, he worked even harder. At the end of 1915 he married the widow of a Washington jeweler, Edith Bolling Galt, whom he had met earlier that year.

World War I broke out about the time of his first wife’s death. The United States would be neutral in the conflict, he announced. It was an attempt to preserve the lucrative U.S.-Europe sea trade. Wilson was able to maintain neutrality for more than two and a half years until Germany made it clear that no merchant ship servicing Britain and continental Europe would be safe from U-boat attack. Capping this was the news that Germany was seeking an alliance with Mexico. Now Wilson knew that America had to enter the war. On April 2, 1917, he called on Congress to declare war on Germany.

War was never the president’s preference, and it was his Fourteen Points that allowed Germany’s new chancellor, Prince Maximilian, to find a way out of admitting defeat and end the war on dignified terms. It seemed at that moment that Wilson could do no wrong.

However, the armistice of November 11, 1918, was not as satisfactory to the Allies as Wilson would have liked. For their part, they would have preferred resounding victory. Their dissatisfaction set the stage for the ultimate failure of Wilson’s diplomacy. Germany would be punished and war would come again, despite the president’s every effort to render the world a peaceful place where nations would eschew war as a solution.

Wilson’s most cherished concept was the League of Nations, which he set forth at the Paris Peace Conference in 1919. The judges for the Nobel prize for peace recognized his efforts that year. But while the League lasted until 1946, Wilson was unsuccessful in persuading the U.S. Senate to ratify America’s involvement.

A tragic stroke incapacitated Wilson in September 1919 in the midst of a whistle-stop tour to convince the nation of the value of the League of Nations. The weakened president never recovered, despite his wife taking care of him with all her strength.

Bypassed in the presidential election of 1920, Wilson died four years later at his private residence in Washington, D.C., still passionate for America’s entry into the League of Nations and the hope for peace that it represented.