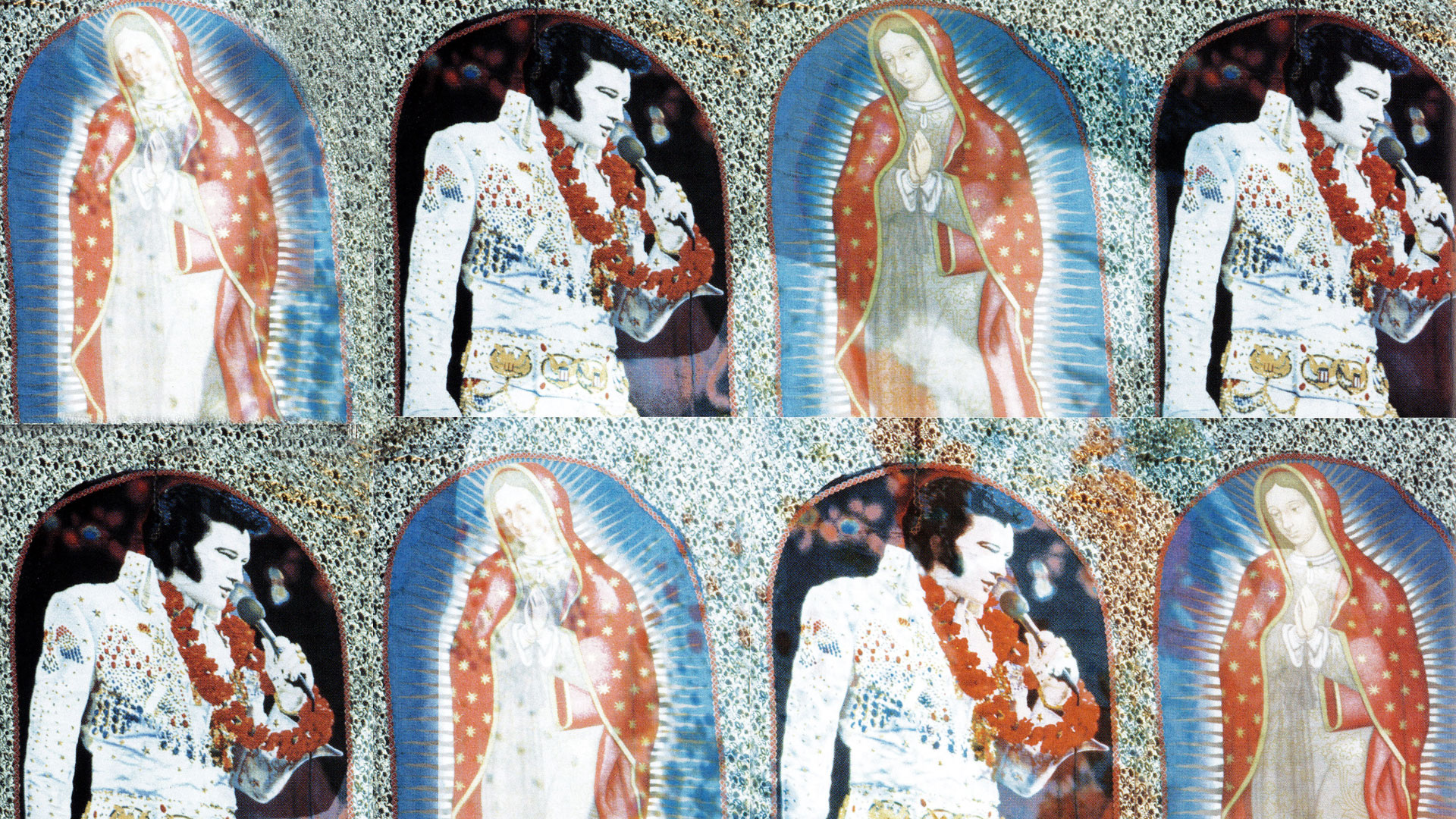 With more than 625 active fan clubs worldwide, Elvis may be dead, but he is certainly not forgotten. Today he is everywhere, on everything from T-shirts to coffee mugs, refrigerator magnets, plates and postage stamps.

Why is the king of rock and roll still afforded such adulation?

Elvis’s poor and humble beginnings in Tupelo, Mississippi, are a big part of his legendary appeal. It’s the story of the great American dream. Born January 8, 1935, he was the only surviving child of Vernon and Gladys Presley (his twin brother Jessie was stillborn). The family moved to Memphis in 1948, where Elvis enrolled in high school. He was known as something of a misfit and a loner, whose big accomplishment was winning the top prize at a student talent show.

Memphis provided a melting pot of musical influences for the young Elvis. On the radio he heard a colorful variety of country and western, gospel, and rhythm and blues. He would later combine these influences into his own unique style.

In 1953 he made a recording at Sun Records as a gift for his mother. The company arranged for additional recording sessions, teaming Elvis with a couple of local musicians. By the next year he was making regular appearances on a weekly country music radio show, and his career took off.

“No one can say what would have happened to Elvis had he stayed at Sun, whether he would have made it or not,” comments author David Rubel in his book Elvis Presley: The Rise of Rock and Roll. “In the music business, as in any other,” he notes, “talent alone is not enough to guarantee success. But there’s no doubt that Elvis would not have become the phenomenon he did if it hadn’t been for the Colonel.”

The reference, of course, is to Elvis’s career-long manager, “Colonel” Tom Parker, who shaped the singer’s career and marketed his new product to the hilt, signing him with RCA in 1955 for $35,000. Within a year Parker’s client was a millionaire.

Much of Elvis’s top-selling music over the next several years came from his 31 feature films, with the soundtrack of G.I. Blues holding the number-one spot in the album chart for 10 weeks. Blue Hawaii was number one for 20 weeks. The official Elvis Presley website estimates that Elvis has sold over one billion record units worldwide—more than anyone else in history. His 1973 special, Elvis: Aloha from Hawaii, was telecast via satellite to an audience of more than a billion in 40 countries around the world. More Americans watched Elvis’s special than watched Neil Armstrong take man’s first walk on the moon.

Perhaps it’s not so amazing, then, that 20 years after his death, Elvis “appeared” in a sell-out concert in Memphis. His videotaped image was accompanied live on stage by more than 30 former bandmates and the Memphis Symphony Orchestra. Using this concert as a prototype, Elvis Presley Enterprises, Inc., decided to take Elvis on tour. With Elvis: The Concert, he again made history by becoming the first performer to star in a live concert tour while no longer living. The tour went international in 1999, beginning with a concert in London—his first outside North America.

Elvis has earned more money since his death than when he was alive. In fact, Forbes magazine calls him “the richest guy in the graveyard.”

The result is that Elvis has earned more money since his death than when he was alive. In fact, Forbes magazine calls him “the richest guy in the graveyard.” In 2000, he pulled in $35 million, with $15 million coming from admissions to his Graceland mansion. With the exception of the White House, Graceland is the most visited home in America, with more than 600,000 visitors a year.

Even the U.S. Postal Service has benefited from Elvis’s larger-than-life persona. In 1993 they featured his picture on a postage stamp. It is the most widely publicized stamp issue in the Postal Service’s history and is the top-selling commemorative stamp of all time.

Throughout Elvis’s life, fans went wild at his live performances. But the more conservative older generation found his overtly sexual gyrations shocking, to say the least. In fact, by the time the up-and-coming teen idol made his third appearance on The Ed Sullivan Show in 1957, they would show him only from the waist up.

“There had been a total ban on sex in pop music before Elvis came along and put action to the words he sang,” explain Steven and Boris Zmijewsky in Elvis: The Films and Career of Elvis Presley. “So far as the teenage female was concerned, Elvis Presley was Rudy Vallee, Rudolph Valentino, Clark Gable, and Frank Sinatra all wrapped into one.”

In the 1960s, Elvis took a seven-year break from live performances, but his comeback performance in 1968 showed that the old flame still burned brightly. The Zmijewskys write of the event, “The audience was mesmerized by this dark figure who was Rock ’n’ Roll Incarnate—some adolescent fertility god returned from the grave, or, at least, exile. The applause was genuine and deafening.”

Many of Elvis’s fans still feel a strong personal bond with him, talking about his charisma and his “animal magnetism.” They feel they connected with him even when they saw him on television or in a large arena: they just knew he was looking at and singing just to them.

According to Rubel, Elvis “embodied the tensions that made rock and roll so dynamic. He was both city and country, black and white, rebellious and respectful all at the same time. He was the ultimate teenager, and for that reason he would also become the ultimate teen idol.”

However, the Elvis Presley phenomenon is about more than just his sex appeal, his music and his charisma. It’s also about tragedy: a self-made man who had it all—fame, wealth, admiration—only to become miserable, retreat into a life of drug and alcohol abuse, and die alone.

Erika Doss, author of the 1999 book Elvis Culture: Fans, Faith & Image, spent hours talking and writing to fans in an attempt to shed light on the Elvis phenomenon. One of them observed: “The fans who supposedly ‘loved’ him made his a very difficult life. He was mobbed everywhere he went. He could not shop, take a walk, ride a motorcycle, or even go to an amusement park without elaborate security, secrecy and much planning. These restrictions, I feel, were probably the reason he resorted to alcohol and drugs.”

His personal problems notwithstanding, the king of rock and roll has become the most enduring image in American popular culture, and he is constantly held up as an icon of the 20th century.

“Why has Elvis Presley become sanctified as the central figure in what some are calling a quasi-religion?”

“Why has Elvis Presley become sanctified as the central figure in what some are calling a quasi-religion?” asks Doss. “The answer, quite simply, is that Elvis Presley occupies a big space in the daily lives of many Americans. . . . Especially for fans, Elvis has sweeping significance in terms of personal, social, and even national identity: Elvis is who they want to be, who they most admire, who they mourn for; Elvis is their image of an ideal American.”

According to Doss, mainstream journalists and academic critics “cite a long list of quasi-religious factors and conditions that seem to confirm Elvis’s contemporary deification: how in the years since his death, a veritable Elvis religion has emerged, replete with prophets (Elvis impersonators), sacred texts (Elvis records), disciples (Elvis fans), relics (the scarves, Cadillacs, and diamond rings that Elvis lavished on fans and friends), pilgrimages (to Tupelo and Graceland), shrines (his Graceland gravesite), churches (such as the 24-Hour Church of Elvis in Portland, Oregon), and all the appearances of a resurrection (with reported Elvis sightings at, among other places, a Burger King in Kalamazoo, Michigan).”

Fans collect everything Elvis. Some even create special Elvis shrines and dedicate certain rooms or areas of their homes to him. “Certainly for many Elvis fans,” writes Doss, “the making of Elvis Rooms suggests how their homes have become spiritual sanctuaries in which they freely express the devotional nature of their relationship with Elvis. While distancing themselves from the real-life problems of contemporary mainstream religions, Elvis fans subvert and appropriate religious styles and sensibilities to construct special private spaces where Elvis holds center stage.”

Each year thousands of fans who make the pilgrimage to Graceland pay tribute in a candlelight vigil at the Meditation Gardens gravesite where Elvis is buried. Doss says, “The tone of this ritual is clearly borrowed from traditional religious practices, from the ceremonial ambience of midnight mass services at Christmas to the precisely timed vigils at the Shrine of St. Jude in Chicago, where candle lighting marks the beginning and the end of each pilgrim’s devotional encounter.”

She goes on to say, “People build shrines and make pilgrimages for religious reasons, because of deeply felt needs for meaning and enlightenment, in hopes of salvation or expectations of spiritual satisfaction, as tributes to special, sacred figures, things, or places. The burgeoning of Elvis home shrines, Elvis Week rituals, and Elvis cyberspace temples and texts suggests that Elvis Culture has taken on the dimensions of religious faith and belief. The central component in this quasi-religious construction is, of course, Elvis himself and the ways he is imagined as a special, wondrous, virtuous, transcendent, and even miraculous figure.”

Many fans clearly seek comfort and personal identity in the image of Elvis Presley. Mark Twain once wrote, “We find not much in ourselves to admire; we are always privately wanting to be like somebody else.” And British statesman Benjamin Disraeli said, “Man is made to adore and to obey: but if you will not command him, if you give him nothing to worship, he will fashion his own divinities, and find a chieftain in his own passions.”

“Man is made to adore and to obey: but if you will not command him, if you give him nothing to worship, he will fashion his own divinities, and find a chieftain in his own passions.”

Are these words of wisdom being played out in the Elvis Presley phenomenon? Do some fans live out their deepest fantasies, hopes and dreams in the lives of celebrities such as Elvis because of some void within them—some urgent need to honor something or someone greater than themselves?

Probably very few of Elvis’s fans would say that they are actually worshiping him. But just what is worship anyway? In popular usage, it generally relates to a public service with hymns of praise, prayers and a well-planned liturgy. And for some few, this might actually come close to describing their relationship with Elvis. But the concept of worship goes deeper.

The word worship comes from the old English word weorthscipe, or worth-ship, and refers to worthiness, respect, repute and reverence. Dictionaries suggest that the word embraces not only the concept of adoration given to a deity but extreme or extravagant devotion given to any other object of esteem. The least one can say concerning the conduct of many fans is that Elvis has become for them just such an object.

The irony is that many devoted fans conspicuously fail to show any reverence at all toward the divine being we call God, who records in the pages of the Bible that He is looking for those who will worship Him and put Him before everything else. According to the First Commandment, to do otherwise is idolatry.

Does this not suggest that some have got things way out of proportion? Elvis Presley may have supplied a measure of entertainment and pleasure to millions, but he cannot come close to matching what God is ready, willing and able to supply to all who worship Him “in spirit and truth” (John 4:23). Instead of worshipping (to one degree or another) the iconic king of rock and roll, is it not time to discover a different King, the God who made all people, and everything else besides?