It’s difficult to avoid the idea that 21st-century Western society is polarized. At times it seems that the only valid opinion is an immoderate one; as cultural critic Peter Biskind notes, “the age of extremism has arrived.” It is perhaps not too far-fetched to imagine society as an immense room in which thousands of people huddle together on one side, exchanging toxic abuse with thousands on the other, with a vast and unpopulated no-man’s-land between them. An inverted bell curve describes opinion on just about any issue, from gender and racial inclusivity, to crime and gun ownership, to cultural integration and how children should be raised. Parallels in the realms of sport and war are all too obvious, and human behavior molds itself accordingly. If you’re not on our side, you’re on theirs.

This is a sweeping and simplified picture, but undoubtedly elements of it map accurately onto the cultural landscape. The situation in the United States is perhaps the most prominent example. American commentator Amy Chua writes that “the Left believes that right-wing tribalism—bigotry, racism—is tearing the country apart. The Right believes that left-wing tribalism—identity politics, political correctness—is tearing the country apart. They are both right.” The consternation Chua describes is echoed across the West.

The tenor of political and ethical discussion suggests that anyone wishing to be socially engaged must choose one or the other side, or else be silent. It’s a stark climate, starved of nuance and space for fair-minded discussion, and its restricted choice seems to run counter to democratic principles (though it was arguably created by those very principles).

James Mumford is a British journalist and academic who has also lived in the United States and thus addresses an audience on both sides of the Atlantic. He proclaims in the introduction to his book Vexed: Ethics Beyond Political Tribes: “I’ll put it bluntly. Politically, I don’t like my options. . . . The real source of my frustration is the way every conceivable position on controversial moral issues has been bundled up into ‘package deals’ that I’m supposed to choose between.” He argues that by claiming an ideological position on one issue, we must consequently accept a whole raft of others, even if we feel uncomfortable doing so.

Mumford’s model feels familiar, and it’s fascinating to see how he grapples with issues that are so polarized and so deeply entrenched.

Across half a dozen chapters, the author pairs ethical viewpoints from both sides of the ideological spectrum, exploring their contradictions and similarities. The table of contents promises a lively discussion: “Should Liberals Back Assisted Suicide?”; “Why Social Conservatives Should Raise Wages”; “Why the Left and Sexual Liberation Make Bad Bedfellows”; “What’s Pro-Life About an AR-15?”; “Why Greens Shouldn’t Become Cyborgs”; “Why the Right Should Release Ex-Offenders.” As the chapter headings suggest, he examines points of conflict across numerous issues, including abortion, gun ownership, family concepts and sexual practices, modes of punishment, assisted dying, and the right to life.

Within this, Mumford makes statements that would seem inarguable; for instance, the injustice of draconian restrictions placed on former convicts, making it difficult for them to make any kind of living after release. Yet people do argue it, of course, and in this we begin to see the intractability of the problem. One side says that in the interest of public safety, released felons must give up many rights and freedoms that the rest of the population takes for granted. The other side argues that once they have paid their debt to society, ex-convicts should be allowed the chance to live a productive and fulfilling life—to land a job, find suitable housing and merge back into society, rather than be ostracized and thus condemned to pay for their crime (no matter how small) for the rest of their lives.

Mumford quotes legal scholars Zachary Hoskins and Nora Wikoff: “When we consider the obstacles our society puts in the path of former prisoners trying to rebuild their lives, maybe we shouldn’t be surprised by how many wind up committing crimes again in fairly short order” (from their essay, “Hard Times After Hard Time”).

“It makes no difference if you no longer pose a risk to society. Because you have been locked up now you are locked out. Once you have committed a crime . . . you are deemed the kind of person likely to commit more crime.”

With each issue he addresses, Mumford demonstrates tenuous and vulnerable aspects on both sides of the spectrum. Commendably, he also engages personally, grappling (from his own political perspective) with issues that to him initially seem either obvious or impossibly complex. He makes a concerted effort to place himself in the shoes of those with whom he is disinclined to agree and comes to some surprising conclusions.

He also does an admirable job of excising, where possible, emotionally and politically loaded terminology. For instance, while discussing abortion, he coins the word newone to describe the growing object in a mother’s womb. It’s illuminating to note how treacherous language can be in this and other issues, and as a consequence how difficult it is to have any kind of composed and dispassionate discussion.

Vexed is a slim volume, stretching a little over two hundred pages, so it’s inevitable that it does not fully explore the complexities of each of the intersections it addresses. Readers will no doubt experience a number of “yes, but” moments; but of course, such is the case in many books. It nonetheless supplies readers with ample food for thought and opportunities to reconsider and broaden their own perspective. 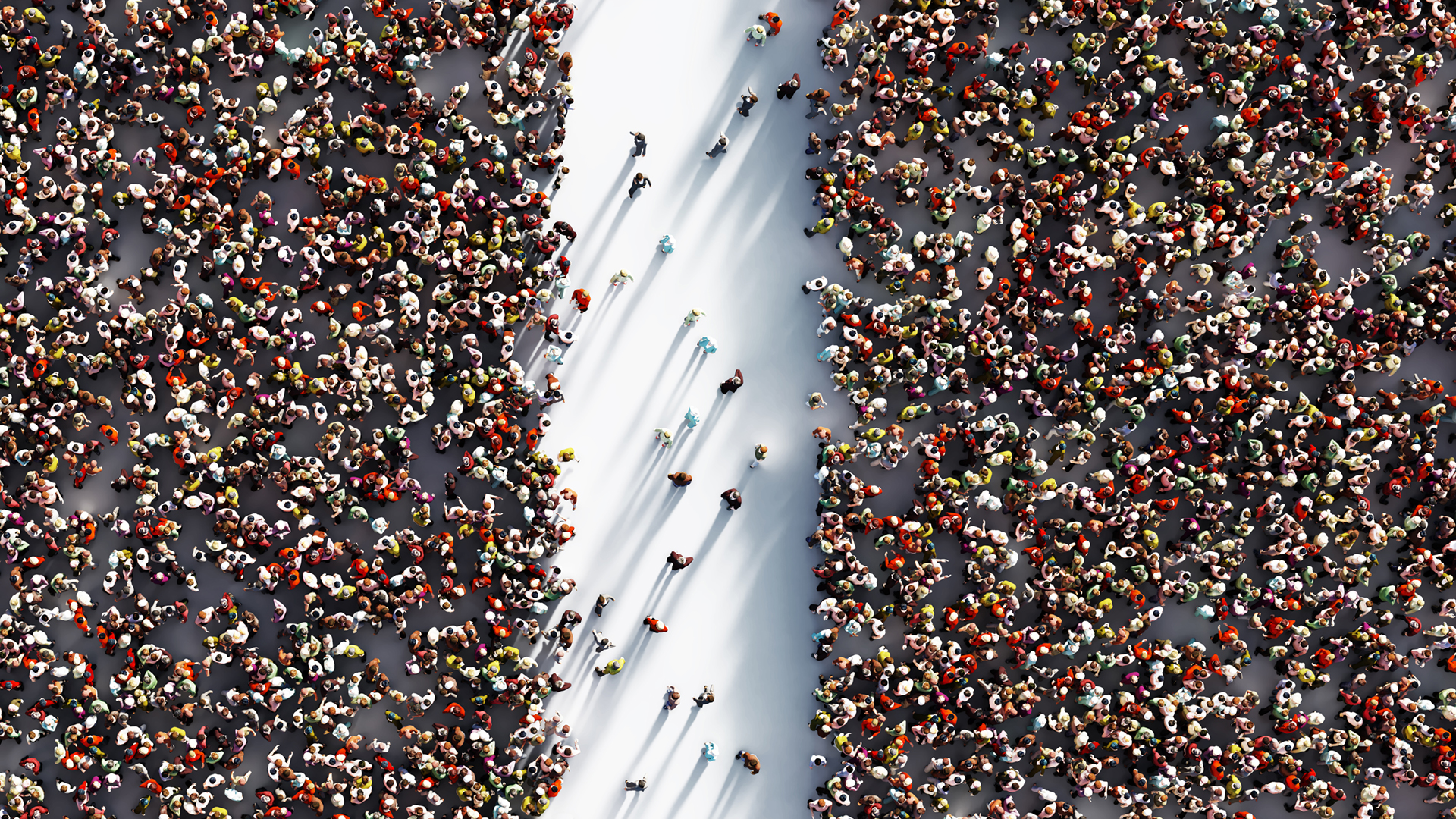 From Imagination to Empathy

“In this book,” Mumford writes in his conclusion, “we have waded into troubled waters—considering some of the most vexed moral questions we face as individuals and as citizens: the sexualization of culture, the breakdown of the family, the insufficiency of wages, the prospect of assisted dying, the failure of the criminal justice system, the environmental crisis, the perils of enhancement, the morality of abortion and the threat of gun violence. I have proposed that our best chance of getting it right, of aligning our action with the good, depends on our ability to slough off our political identities and affirm certain fundamental principles across the political spectrum—inclusivity, family values, sufficiency, personal responsibility, reverence for nature and the sanctity of life.”

“We have to wrest ourselves free of package deals in order to determine the right courses of action.”

Mumford ends his book by presenting an interesting theme which, he argues, is the underlying key to each issue: “moral imagination.” “Something else is required,” he says. “The resolution of each controversy, I propose, requires the exercise of this faculty of moral imagination.”

Drawing on the Enlightenment writings of Edmund Burke, Mumford defines moral imagination as a determination to empathize with others, especially those who are distant in culture and locality or time. It is in essence a form of cross-cultural and future-facing empathy. It works toward inclusivity and the time-honored principle of the Golden Rule. Mumford borrows a definition from literary critic David Bromwich: “A critical feature of the moral imagination . . . is that justice to a stranger comes to seem a more profound work of conscience than justice to a friend, neighbor, or member of my own community.”

This extended exercise of empathy is a rare trait today, in a culture that emphasizes self-care and is often eager to take offense. Yet Mumford believes that the practice, if widely applied, would unpick the political and moral deadlock that stymies much of public discussion.

He draws on a long ideological history in support. Near the end of Shakespeare’s famous play, the humbled King Lear has a Job-like revelation and urges those with power and privilege: “Expose thyself to feel what wretches feel, that thou mayst shake the superflux [your excess wealth] to them, and show the heavens more just.”

Mumford goes further back to cite wisdom from the fourth-century BCE Cynics and the Greek and Roman Stoics, as well as principles espoused by the apostle Paul in the first century regarding what Mumford calls “the oneness of humanity and the equality of peoples”: “There is neither Jew nor Greek, there is neither bond nor free, there is neither male nor female; for ye are all one in Christ Jesus.” Mumford uses this to illustrate the value of empathizing across humanly devised barriers, whether demographic, geographic, racial or gender-related.

Some say that extending sympathy or empathy to strangers necessarily comes at the expense of those closest to us. Such an idea implies that our capacity to empathize is limited or, in extreme cases, that we are incapable of acting in this way at all (for instance, some argue that all altruism is a sham).

Mumford disagrees. For him, empathy is not a zero-sum game. Exercising it toward those closest to us is a kind of training ground for its wider application: “Loving our own communities provides the foundation for the exercise of moral imagination. How? First, by providing an education in seeing, a sustained attention to the particularities of a predicament in which our neighbors find themselves. Secondly, by providing the training ground for the kind of self-sacrifice required as a response to a recognition of those predicaments.” It is with this mindset, he suggests, that each of us can truly be (to use a much-derided term) “a citizen of the world.”

As we noted earlier, the idea of extending empathy to others is not new (consider, too, the two-thousand-year-old biblical parable of the Good Samaritan). Indeed, in the Bible, empathy and selfless care are not only recommended to humanity now; the book goes so far as to promise a future in which it will be a dominant principle of life. Regardless, Mumford is certainly right to say that empathy is currently in short supply.

It should be noted that current research suggests today’s voters are more willing to disengage themselves from conventional political alignments, so it could be argued that Mumford somewhat overstates the prominence of package-deal politics. But he is absolutely correct in suggesting we live in a world in which empathy and consideration for others has turned cold, often in deference to making one’s own voice heard, and that there needs to be a sizable change in the way we interact with our fellow humans.