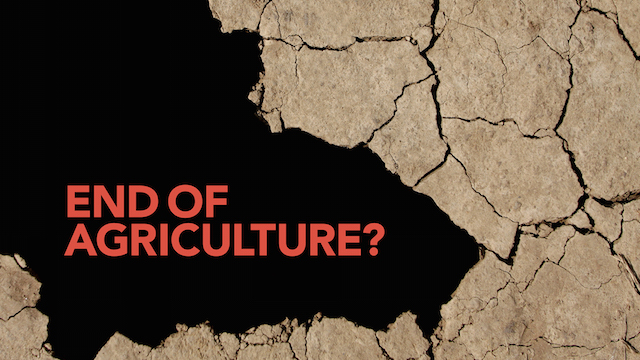 Soil erosion remains one of the most serious environmental and public health problems facing society. Every second the clock ticks, the Mississippi River carries the equivalent of a dump truck of eroded topsoil into the Gulf of Mexico. Why don’t we hear more about it?

Deborah Koons Garcia is a filmmaker and producer of the documentary Symphony of the Soil.

Garcia: “Most people are soil blind. So they don’t see it, and they don’t realize how important our relationship with the soil is. And because they don’t see it and understand it, our relationship with it tends to be abusive and extractive. We’re taking and taking and taking and not giving back. We keep doing that to the point where the soil can’t sustain itself. It will collapse and we’ll find ourselves really scrambling to figure out how we’re going to feed ourselves.”

Without adequate care for the topsoil, its essential role in food production is diminished and you’ve entered the downward spiral toward extinction. Can civilizations collapse? Sadly, the answer is yes. According to geologist David Montgomery, “how we address the twin problems of soil degradation and accelerated erosion will eventually determine the fate of modern civilization.”

Garcia: “Some people say that in 30 years we’ll be out of topsoil. And because of climate change there’s more drought and there’s more flood, and so that also increases erosion. Especially the way that . . . the incredible land—you know, these mollisols, which are the most amazing soils in the entire world, and look what we’re planting on them. Forty percent of that corn goes into cars. We’re feeding cars and cows. None of it feeds people.”

The abuse of topsoil is demonstrated by accelerated erosion. It’s made worse by industrial pollution with inorganic substances and chemical fertilizers.

Garcia: “If you take an incredible biologically diverse place and turn it into a monoculture, you have to use all of these synthetic inputs and management techniques to make that work, because nature is not a monoculture. When you use nitrogen fertilizer and pesticides, you dry out the soil. When soil was good, it had organic matter in it. When it did rain, it would hold on to that water so the plants could survive longer. But if you have more and more extreme climate events and more and more extreme climate, not even the best soil in the world is going to be able to live through that and thrive through that, because it’s abnormal.”

The problem may be global, but the solution is local. It begins with you and me.

As a well-known agronomist put it a few years ago, the problem of agriculture—domestic or international—is a profoundly spiritual matter. It’s a problem at the ethical, moral and personal level. It’s about what we think and do individually.

At the close of her film, Deborah Garcia interviewed a soil scientist with an interest in things biblical. He noted that in the Genesis account of Adam and Eve, the man’s name means “red earth” and the woman’s name “life.” He made the connection between these first parents and soil and life. Their job was to tend the Garden of Eden with God’s specific instruction to “dress and keep” it. Or, said differently, to serve and preserve it. That’s an intensely spiritual piece of instruction from the mouth of God Himself.