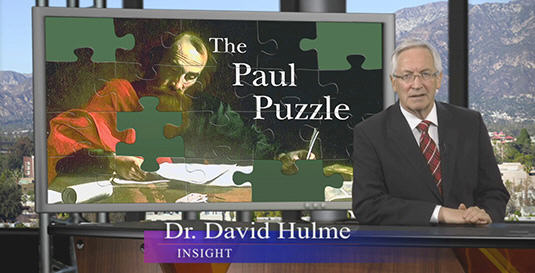 Surprising as it sounds, many claim that the founder of Christianity is not in fact Jesus but the apostle Paul. Can this be true?

In recent years scholars have put forward many new ideas about Paul. Of course, not all scholars are in agreement, but when we put Paul back into his first-century context and listen carefully to his own words from within that culture, we arrive at a challenging view. This is the so-called new perspective. What went before was quite different.

Historian Paula Fredriksen has been at the forefront of new research on Paul: “The old perspective on Paul is that he became a Christian, and that that meant something other than being Jewish. It’s captured very nicely in a children’s Christian cartoon I once saw, where Paul is going on the road to Damascus, and he has the Jewish male head covering, the kippah, on his head. He gets knocked to his feet, the shining light is on him, Jesus speaks to him, and the rest of the cartoon he doesn’t have a kippah on any more. Finished! He’s a Christian.

“Christianity is so easily imagined as somehow the opposite of Judaism, because that’s how Christianity has presented Judaism to itself in the centuries long after Paul. In Paul’s lifetime Christianity is only understandable as an extreme form of Judaism, and Paul himself thinks of himself as a Jew.”

In other words, Paul has been wrongly portrayed for the best part of the last 2,000 years or so. And that includes the way the Christian church at large has viewed him and his teachings.

Craig Evans has written many books on the New Testament. His comments about our misunderstanding of Paul are even more pointed: “I think Paul has been misinterpreted for the worst part of 2,000 years. I think the better part is around the corner, where we understand Paul in a Jewish context, in the context in which he would have expected to be interpreted. I think Paul would have been appalled at the interpretation of his letters and his theology over the last several hundred years.”

It’s this misinterpretation that has obscured the real Paul. Various well-known historical figures have contributed to this distortion. I asked Professor Fredriksen what she made of the idea that we’ve not really known who Paul is.

Fredriksen: “People who loom large in history are very easy to misinterpret, precisely because they are so important culturally. So this is how very naturally Paul can seem to be a Protestant. He doesn’t like all of that messy ritual. This is what Luther thought. He didn’t like the insipient Roman Catholicism of Jewish practice.

Of course, how the church of today became so different is a history lesson in itself. The Roman emperor Constantine had a lot to do with it. He’s often referred to as the first Christian emperor, though his so-called conversion only took place on his deathbed. Yet under his rule in the fourth century, the Sabbath within the Roman Empire was officially changed from Saturday to Sunday. And Christians were told not to confer with Passover-observing rabbis about the dating of Easter.

What would Paul have made of these changes if he’d been alive in Constantine’s time?

“For one thing, when Eusebius, the official biographer of Constantine, writes about Constantine, he sees the foundation of the Christian Roman Empire as Isaiah’s peace, the Messianic peace promised in the Old Testament. When Paul’s thinking about the kingdom of God, he’s certainly not thinking of the Roman emperor as its agent.”

Indeed, Paul would have had little to do with what we now know as traditional Christianity from many points of view. Take the matter of the nature of God being explained as the Trinity. It turns out that Paul knew nothing of the idea. It was not what his background taught him, and it was not what he had understood from Jesus and His followers.

Not only do we make a mistake if we try to force Paul into a 21st-century context, there’s another problem.

Fredriksen: “If we think of Paul as an orthodox Christian, we will only misinterpret him that much more. He’s living in a period where he’s not thinking in a Trinitarian manner. The idea of the Trinity hasn’t been conceived yet. His letters will have Jesus Christ in them. They will have God, the God of Israel, God the Father in them. He will talk about the Spirit of God, and those are the textual origins that will be used to formulate the doctrine of the Trinity. But Paul’s not thinking in a Trinitarian way.

“People reading Paul assume that he’s hostile to Judaism because he is the inventor of Christianity. He’s still imagining himself as Jewish and he’s presenting Christianity in continuity with Judaism.”

And that line of thinking raises many difficult questions. For anyone who wants to get closer to the belief and practice of the first-century Church Jesus founded, this website has many articles and some free hour-long documentaries, one of which is Quest for the Real Paul.