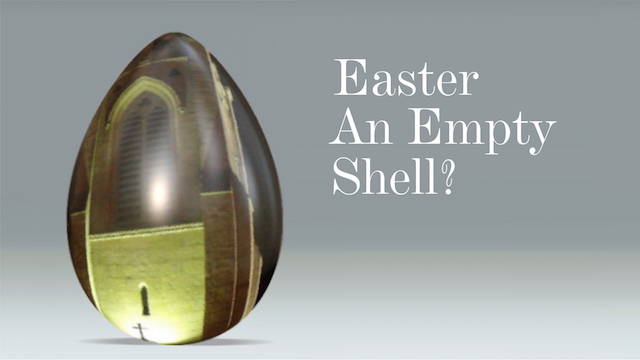 It’s the time of year when many people commemorate the death and resurrection of Jesus of Nazareth. Easter is one of the two crucial dates on the Christian calendar. So it comes as a surprise that the only reference to Easter in the English-language Bible is an erroneous translation and that the original New Testament Church never observed it.

This is the kind of information that makes many people suspect that something fundamental and vital has gone missing between the earliest days of the Church and now. The Danish philosopher Søren Kierkegaard said it well when he noted, “The Christianity of the New Testament simply does not exist.”

This gap has led to many of the biblical accounts being retold inaccurately. A classic example is the story of crucifixion week. When did Jesus die? When was He buried? And how long was it before He was seen again? You might be surprised what the record does and does not say.

A few years ago I made a documentary in the land of Jesus’ birth, detailing some of the most common misconceptions about Him. Here’s a segment that deals with the events of crucifixion week:

“The number of misconceptions we’ve discovered in this journey through the Gospels is a surprise to many people. But there’s an even greater shock in store when we consider the events of the last week of Jesus’ life, especially those surrounding His death and resurrection.

“When the women who had seen Jesus’ crucifixion and burial came to the tomb on Sunday morning, they found nothing. This is a tomb of the kind that was extant in the first century in Jerusalem. You’ll notice that the great round stone is rolled back from the entrance, just as it was on that Sunday morning. Where the misconception arises is in believing that Jesus was resurrected on Sunday morning.

“Part of the difficulty lies in how we measure a day. In biblical times a day was reckoned from sunset to sunset. Today we think of a day from midnight to midnight. The truth of the matter is that Jesus participated in the last supper on a Tuesday evening. He was tried during the first part of Wednesday and crucified later in the day, dying late in the afternoon. If He was the Messiah, He would have to be alive again 72 hours later—that is, by early evening on Saturday. That’s three days and three nights. The evidence is found by combining the Gospel accounts.

“If the experts can get it so wrong in matters of simple counting, what might they have got wrong in the more important aspects of faith and belief? So maybe Kierkegaard was not so wrong after all when he said that ‘the Christianity of the New Testament simply does not exist.’

“The English writer G.K. Chesterton expressed it a little differently when he said, ‘The Christian ideal [it is said] has not been tried and found wanting. It has been found difficult; and left untried.’

“It’s in the practice of Christianity that the real discussion has to take place.”

I realize that much of what I said in that documentary is controversial. It may have caused you to have some questions. It comes as a shock, after all, to discover that Easter has nothing to do with the death of Christ. The mistranslated word is pascha, which means not Easter but Passover. This is what the early Church observed at this time of year.

Men like Kierkegaard and Chesterton are some of the few who faced up to the contradictions between what the Bible says and the practice of modern Christianity. One man once said that “people stumble over the truth, pick themselves up, and go on as if nothing had happened.” Hopefully, we can be a little more honest about these things than that.