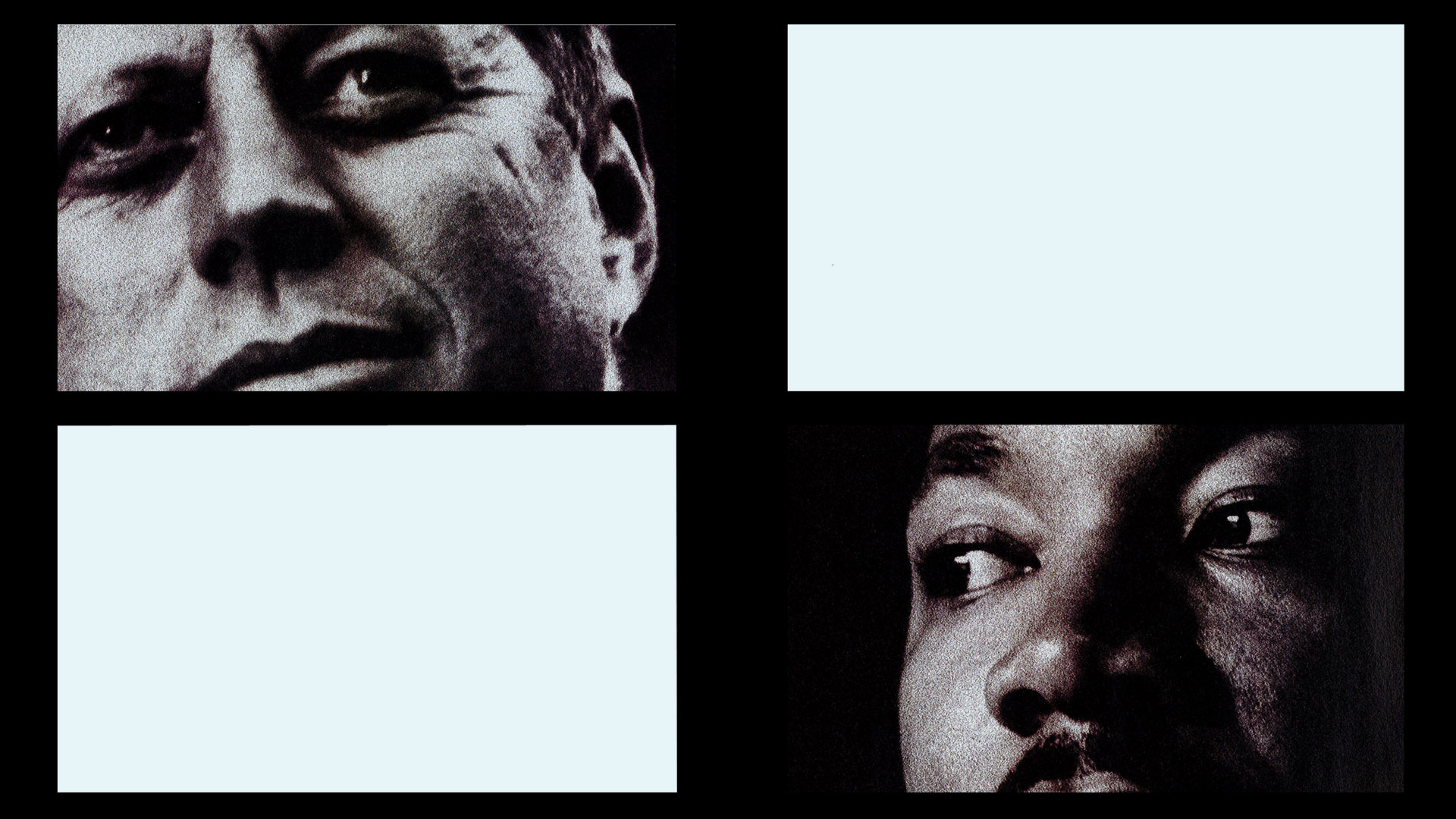 History provides great theater in the ongoing human quest for freedom from oppression and injustice: the biblical Exodus, Tiananmen Square, and the toppling of the statue of Saddam Hussein in Baghdad are a few examples.

In the summer of 1963, another such scene was acted out. Two prominent personalities came to center stage for a series of dramatic and defining moments. Values and vices were being explored with enthusiasm throughout the 1960s. The cultural climate was right for raising one’s voice to ask questions and express concerns. But few arose who could articulate advice to a troubled nation like John F. Kennedy and Martin Luther King Jr.

Kennedy came to the presidency of the United States in 1961, having won the election by a razor-thin margin. Some suggest that the courtesy and concern he showed to embattled civil rights leader King and his family in October 1960 resonated well with a significant percentage of the public and pushed Kennedy over the edge to victory that November.

Surely there was no shortage of international issues for the president to address: Cuba, West Berlin, Vietnam. But the world wondered how the new president of the land of the free and the home of the brave would approach the domestic problem of racial discrimination. The streets of American cities resembled the land of the disillusioned and the home of the disenfranchised. In the nation that claimed to be the friend of all who loved freedom, a significant portion of the population could do little more than yearn for a piece of that freedom.

The Bill of Rights, the Declaration of Independence, the Constitution of the United States and even the Emancipation Proclamation signed by Abraham Lincoln 100 years earlier were the promissory notes of well-intentioned men who created hopes and dreams in the minds of those who populated the young nation. But the documents and declarations alone were unable to ensure that promise became practice.

A biblical proverb warns that “hope deferred makes the heart sick” (Proverbs 13:12). By the 1960s, America’s black community was weary of waiting and hoping for justice.

On June 11, 1963, Kennedy addressed America in a hastily prepared televised talk that rekindled the hope of millions of Negro citizens. Some would say that this speech was among his finest, representing unprecedented statesmanship and affirmative leadership. He made clear the context of his comments: “A great change is at hand, and our task, our obligation, is to make that revolution, that change, peaceful and constructive for all.”

During his address, the president proclaimed discrimination and racial segregation to be more than irrational or impractical: “We are confronted primarily with a moral issue,” he said. “It is as old as the scriptures and is as clear as the American Constitution.”

Indeed, long before the summer of 1963, the Judeo-Christian Scriptures had declared discrimination to be a violation of the moral code: “If you really fulfill the royal law according to the Scripture, ‘You shall love your neighbor as your self,’ you do well; but if you show partiality, you commit sin, and are convicted by the law as transgressors” (James 2:8–9).

Reminiscent of a prophet with a summons for repentance, Kennedy called his professedly Christian country to introspection and self-examination. “I hope that every American,” he declared, “regardless of where he lives, will stop and examine his conscience. . . . This Nation was founded by men of many nations and backgrounds. It was founded on the principle that all men are created equal, and that the rights of every man are diminished when the rights of one man are threatened.”

Making use of scriptural wisdom, Kennedy pointed the American public to the principle of what has come to be called the Golden Rule, a simple yet profound idea expressed in the spiritual handbook of nations that claim the Judeo-Christian heritage: “Therefore, whatever you want men to do to you, do also to them, for this is the Law and the Prophets” (Matthew 7:12).

As Kennedy put it, “the heart of the question is whether all Americans are to be afforded equal rights and equal opportunities, whether we are going to treat our fellow Americans as we want to be treated.”

On this historic occasion, the American president proposed that Congress enact civil rights legislation that would become the recognized law of the land. However, the president hastened to add that “this is not even a legal or legislative issue alone. It is better to settle these matters in the courts than on the streets, and new laws are needed at every level, but law alone cannot make men see right. . . . [This problem] must be solved in the homes of every American in every community across our country” (emphasis added).

If not law alone, then what is needed to make men see right and thereby effect change in every home, every community, every country?

Two months later, via another televised address, Americans would witness the next act in this docudrama that sought to bring moral maturity to the conscience of a nation. The American capital had been bracing itself for the impending “March on Washington for Jobs and Freedom.” Taylor Branch, in Pillar of Fire: America in the King Years 1963–65, writes, “The Pentagon readied nineteen thousand troops in the suburbs; the city banned all sales of alcoholic beverages; hospitals made room for riot casualties by postponing elective surgery. More than 80 percent of the day’s business revenue would be lost to closed and empty stores.”

The Autobiography of Martin Luther King Jr., edited by Clayborne Carson, describes the day’s civil rights demonstration: “In its entire glittering history, Washington had never seen a spectacle of the size and grandeur that assembled there on August 28, 1963. Among the nearly 250,000 people who journeyed that day to the capital, there were many dignitaries and many celebrities, but the stirring emotion came from the mass of ordinary people who stood in majestic dignity as witnesses to their single-minded determination to achieve democracy in their time.

“They came from almost every state in the union; they came in every form of transportation; they gave up from one to three days’ pay plus the cost of transportation, which for many was a heavy financial sacrifice. They were good-humored and relaxed, yet disciplined and thoughtful. . . . It was an army without guns, but not without strength. It was an army into which no one had to be drafted. It was white, and Negro, and of all ages. It had adherents of every faith, members of every class, every profession, every political party, united by a single ideal.”

Branch adds: “The March on Washington earned the capital letters of a landmark event by the end of the afternoon. Beyond the record-breaking numbers—upward of a quarter million—and the stunning good order that turned all the riot troops and plasma reserves into a stockpile of paranoia, the march made history with dignified high spirits.”

It would have been hard if not impossible for King to have foreseen the impact of what came to be known as his “I have a dream” speech.

When King delivered his message to this assembly, he was very aware of its historic implications. However, it would have been hard if not impossible for him to have foreseen the impact of what came to be known as his “I Have a Dream” speech.

In his address, King asked his audience not to “wallow in the valley of despair.” As a strong proponent of nonviolence, he preached to the gathered throng to resist temptation and “not seek to satisfy [their] thirst for freedom by drinking from the cup of bitterness and hatred,” but to continue their struggle “on the high plane of dignity and discipline.” He shared his dream of a better day ahead.

Evoking images found in the biblical book of Isaiah, he described a day when “every valley shall be exalted, every hill and mountain shall be made low, the rough places will be made plain and the crooked places will be made straight, and the glory of the Lord shall be revealed, and all flesh shall see it together” (from Isaiah 40:4).

He dreamed of a time when men “will not be judged by the color of their skin but by the content of their character.” His longing reflected our need for traits that are attributed to the Almighty: “For the Lord does not see as man sees; for man looks at the outward appearance, but the Lord looks at the heart” (1 Samuel 16:7). For King’s wish to come true it would require that people adopt this Godlike attribute.

When Kennedy declared that “law alone cannot make men see right,” he acknowledged a reality that the Hebrew Scriptures had recorded long ago. After giving His laws, the God of Scripture lamented that men don’t see the wisdom of His Word: “Oh, that they had such a heart in them that they would fear Me and always keep all My commandments, that it might be well with them and with their children forever!” (Deuteronomy 5:29).

When Kennedy declared that “law alone cannot make men see right,” he acknowledged a reality that the Hebrew Scriptures had recorded long ago.

With strikingly similar themes rooted in the Judeo-Christian ethic, it shouldn’t surprise us that these two visionaries were not the first to share such hopes and dreams. God has long desired a change in the human heart and a time when His law will flow from the minds of men: “Then I will give them one heart, and I will put a new spirit within them; and take the stony heart out of their flesh, and give them a heart of flesh, that they may walk in My statutes and keep My judgments and do them; and they shall be My people, and I will be their God” (Ezekiel 11:19–20; Hebrews 8:10–11).

Wouldn’t it make sense that those who claim to adhere to the principles of the Judeo-Christian ethic would make every effort now to make these principles their practice, thereby showing their faith to a factious world? As the apostle Peter declared when the early New Testament Church was developing, “In truth I perceive that God shows no partiality. But in every nation whoever fears Him and works righteousness is accepted by Him” (Acts 10:34–35). The apostle Paul, too, understood that God “has made from one blood every nation of men to dwell on all the face of the earth” (Acts 17:26).

Kennedy and King played significant roles in the discussion of race relations. Among other things, they can be credited with contributing to the landmark Civil Rights Act of 1964. But would this long-awaited law reconcile the races, or would it join the list of seemingly empty promises?

Neither man learned the answer to that question, because one last thing that the president and the preacher had in common was that their lives were cut short by assassins before the decade was over. Their hopes and dreams lay unfulfilled in their lifetime.

And since then? The issues of ethnic tension and racial strife continue to strut the world’s stage. It appears that the final act in the drama of freedom from oppression is yet ahead, to be played out only when humanity undergoes that prophesied change of heart. Then, at last, the idealistic hopes and dreams of presidents and preachers will be realized.