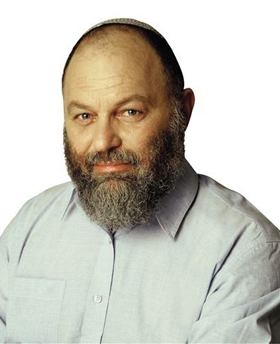 DH Would you outline your position on the momentum that’s being promoted by the Quartet in support of Mahmoud Abbas (Abu Mazen)?

We have to understand that the problem is not Abu Mazen. The problem is that the idea that we can build a Palestinian state, a neighbor of Israel, to be established on the foundation of the accepted criteria among nations, has failed. We tried. Israel made peace with everybody with whom we could make peace: Egypt and Jordan. We have to understand that the Palestinians have changed their story and their goals. They don’t think anymore about having a state of their own. They are now playing games ahead of the Islamic Revolution—inspired, financed and equipped with weapons by Iran. That’s what they decided to be when they elected Hamas as their first government and the representative of their ideas and vision.

The Palestinians now are just representing Iranian ideology and presence at the borders of Israel and between the two states with whom Israel signed peace treaties. We must be very aware that in the region, and especially in America, the only real achievement we had in diplomacy is those two peace treaties that were signed between Israel, Egypt and Jordan. And those peace treaties are now the Islamic coalition’s preferred target to destroy and to undermine. We have to think about how to strengthen the three Western-oriented countries that enjoy relatively stable relations and stable peace treaties so they don’t fall under the pressure of the Iranian coalition of evil. We shouldn’t sacrifice those two peace treaties just to repeat this mantra and slogan that claims “We’re strengthening Abu Mazen.” Abu Mazen will never be able to deliver the goods. He will never be able to have real control over Judea and Samaria [the West Bank].

DH You mention Jordan and Egypt—Arab states that have signed peace treaties with Israel. Some people would point to that as evidence that Arab peoples can make peace. Why lump all of the Palestinians together because of what has happened in Gaza? There are a lot of moderate Palestinians. Surely the current prime minister of the Palestinian Authority, Salaam Fayyad, would be a good example. What do you say to that line of argument?

EE I think that this argument comes from a lack of knowledge, if not even a deeper ignorance of the Palestinian case. I don’t know, maybe there are moderate Palestinians. But they don’t have any influence whatsoever. We had hopes of free elections out of this process. And what happened in the end? It was just a tool to bring terror organizations into power. So, as far as we understand, the balance of power lies among the Palestinians themselves, in Judea and Samaria and in Gaza. I don’t think that any Israelis will be ready to risk another failing experiment and withdraw from Gaza, or from Judea and Samaria, and give the security and the future of the most highly populated areas in Israel over to Abu Mazen. If Abu Mazen is so weak that he couldn’t even hold Gaza, then who can promise us that Hamas will not take over in other areas where he is weak? And then we’ll be facing an irreversible result, as we are now in Gaza. I say that Israel cannot take any more risks. Israel cannot carry the weight of solving the Palestinian problem on its own shoulders. That’s why we need a coalition that will share its resources and potential in order to better contain the problem, and maybe in three years we will see an alternative leadership, an alternative political culture that will justify taking more risk. As the Palestinians are now, and with all that Israel has suffered, I don’t think Israel should be asked to take any more risks.

DH When the foreign ministers of Jordan and Egypt visited Jerusalem last week to discuss the Saudi-initiated peace proposal, you met with them as chairman of the Knesset Foreign Affairs and Defense Committee and handed them your own proposal. What does it say?

EE The idea is that the coalition of Israel, Egypt and Jordan—the three countries that are really threatened by the extreme version of the Palestinian Authority—has to share the responsibility of effectively containing it.

My proposal with regard to Egypt is that they must do two things: first, become the corridor for humanitarian support to Gaza. It makes much more sense than for Israel to be that corridor. Egypt will make it work much more smoothly. And the second thing Egypt needs to do is to fulfill its commitments, signed by treaty, and to stop the flood of weapons coming from Gaza, which is now coming more and more under the control of Al Qaeda. Egypt can do that by having its troops on both sides of the border and locating the tunnels from both sides—from Egypt and from Rafah. In this way they will do their part in the effective security containment of Gaza.

Israel will have to be present and take full responsibility over security in Judea and Samaria for the long-term, not allowing any other entities or organizations except the IDF to have full control from the River Jordan to the fence that we have built in the West during the last two years. Israel will also be fully responsible for the daily life and the municipal independence of the Palestinians in Judea and Samaria. And the bulk of that independence will be very much due to the reduction in hostility. We have demonstrated quite a successful formula up to now in Judea and Samaria, compared to the two failing models in Gaza and in Lebanon. In Judea and Samaria the IDF has proven a very effective power that has succeeded in containing terror. We shouldn’t abandon such a successful model; we must maintain it.

This is a new concept, a new angle, which shows that we are changing the paradigm. We cannot solve the Palestinian problem. We cannot establish another extreme Islamic state in the Middle East—or two states functioning as ticking bombs—on the foundations of the peace that has been achieved between these three countries. Sure, it might take 10 or 20 years—maybe 50 years—to contain and to train the Palestinian Authority to the point that the extreme Islamic ideology will be defeated. But long-term security containment is very much needed in order to avoid the collapse of the peace treaties that have been achieved and have been functioning as a very stabilizing and moderating element, and to keep them from being totally destroyed by the Palestinians, who are now nothing but representatives of Tehran between Israel, Jordan, and Egypt.

DH In recent years Jordan has rejected any increase in its Palestinian population base. It’s already somewhere around 50 percent. So to suggest to them that they give Jordanian passports to Palestinian residents would seem to me a long shot. Why would it be an advantage to them?

EE It will be advantageous to both. First of all, I think that by having a very controlled process of giving Jordanian citizenship, Jordan would be contributing their share to the coalition. Of course, most Egyptians would prefer not to take any responsibility over Gaza. Jordanians can turn their back and say, “We don’t care about what is going on in Judea and Samaria.” And Israel in the end will take very extreme measures, because it will have to defend itself. So Jordan might not have a direct influence, as the Egyptians have or as we have, but in the end they must know that Israel must take some very extreme measures in regard to the Palestinians in Judea and Samaria. Even without control, many Palestinians will find themselves in Jordan, so it’s better to have a very controlled process than a crisis. Jordan might face this both from the very high percentage of Palestinians who are already living in Jordan and from those who, in the end, may be forced to emigrate to Jordan just because they are unable to live in Judea and Samaria.

So nobody really has a direct interest in dealing with the Palestinian problem, but if they understand that the alternative is worse—that in the end there will be not one but two Palestinian states undermining the peace treaties between Jordan and Israel and between Egypt and Israel—they will see that it’s better to share the responsibility for everything by participating. This would not threaten the existence of any of these three countries; not Israel, not Jordan, and not Egypt. It does not put the entire weight on any one country—because in the end, when one state has to choose between defending itself and its future on one hand, and tolerating Palestinian hostility on the other, then very extreme measures are taken. Look at what happened in Jordan in the ’70s, at what is now going on in Lebanon, and at what Israel suffered from being left alone to deal with the problem. So you’re right; Jordan was better off to say, “We are out of that.” But they cannot be out of it, because when Israel has problems on that scale, then in the end it will also be a Jordanian problem.

DH When you met with the foreign ministers, did you read your proposal to them? Did you discuss it?

EE No, they took it to read. They had some very general comments about the Arabic initiatives. They said it’s not a matter of “take it or leave it,” it’s much more flexible; and they really believe that this is a way of having some diplomatic advance. I told them that if the basic idea of future momentum is about repeating the demand that Israel withdraw to the indefensible borders of ’67 and to share our borders with this hostile, extreme Palestinian Authority, that won’t work, that won’t be any kind of advancement. But they didn’t really respond to my paper. I gave it to them, and I hope that I will hear from them very soon.