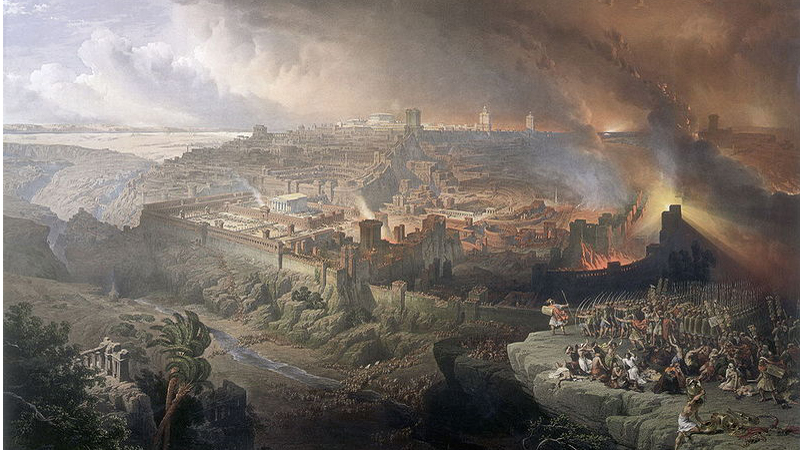 You are looking at a rare reproduction of a lost oil painting titled The Siege and Destruction of Jerusalem by the Romans Under the Command of Titus, A.D. 70 by David Roberts, a member of Britain’s Royal Academy. This may be the first-ever publication of this beautiful painting. The original, dating from the mid-19th century, was sold at auction in 1961 to an Italian art dealer in London. The painting made its way to Rome and was sold shortly thereafter, but there is no record of the transaction.

The original lithograph from which this picture is reproduced is owned by the Jerusalem Historical Society. Its president, author and journalist J.S. Peeples, has graciously made this copy available to Vision for publication in our premier issue. Peeples, who has authored a book titled The Destruction of Jerusalem, began a search for the original painting after he saw a damaged lithographic reproduction in Texas. The 1850 lithograph, measuring 27.5 inches by 42 inches, was taken from the original oil painting, which was an incredible 7 by 12 feet.

David Roberts, a Scottish-born artist, rose from poverty to become one of the most popular painters of the 19th century. He traveled extensively in the Middle East in 1839, creating well over 250 paintings and drawings beautifully depicting majestic and historic scenes of this ancient land. His pictures of the Holy Land were his most famous; they catapulted him to his first great success as an artist.

In order to ensure the greatest possible accuracy in this particular painting, which was completed in 1849, Roberts called upon the writings of the Jewish historian Flavius Josephus, an eyewitness to the Roman siege and the destruction of Jerusalem. Josephus’s account of this turning point in Jewish history is the most extensive account of the event in existence today.

According to history, the Jews began a revolt in A.D. 66 in response to increasingly oppressive rule by the Romans. Titus, the son of the emperor Vespasian and himself emperor from 79 to 81, led the Roman forces in ending the Jewish uprising. The Jews courageously held the much superior Roman forces at bay for about five months before the city finally fell. On August 10, A.D. 70, the temple was taken and burned, and one month later the upper city was captured. It was one of history’s greatest battles, the outcome of which had been prophesied more than 40 years earlier by Jesus Christ.

Many art collectors and critics consider The Siege and Destruction of Jerusalem to be the finest work of the prolific Roberts. When it premiered in London it won unanimous acclaim from critics. But the painting disappeared in 1854, reappearing only briefly at the 1961 sale at Christie’s auction house.

Since Peeples began his search for the missing original, he has located two other lithographic reproductions, which, like the one he first stumbled across, were made by 19th-century Belgian platemaker Louis Haghe. Haghe was considered the premier lithographer of that time.

From these well-preserved lithographs and with the help of scientists from the Xerox Corporation’s Digital Imaging Technology Center in Rochester, New York, the Jerusalem Historical Society has launched an effort to create a reproduction that will match as closely as possible the original luster and color of the Haghe print. A reproduction of the picture in its original monumental size is planned.