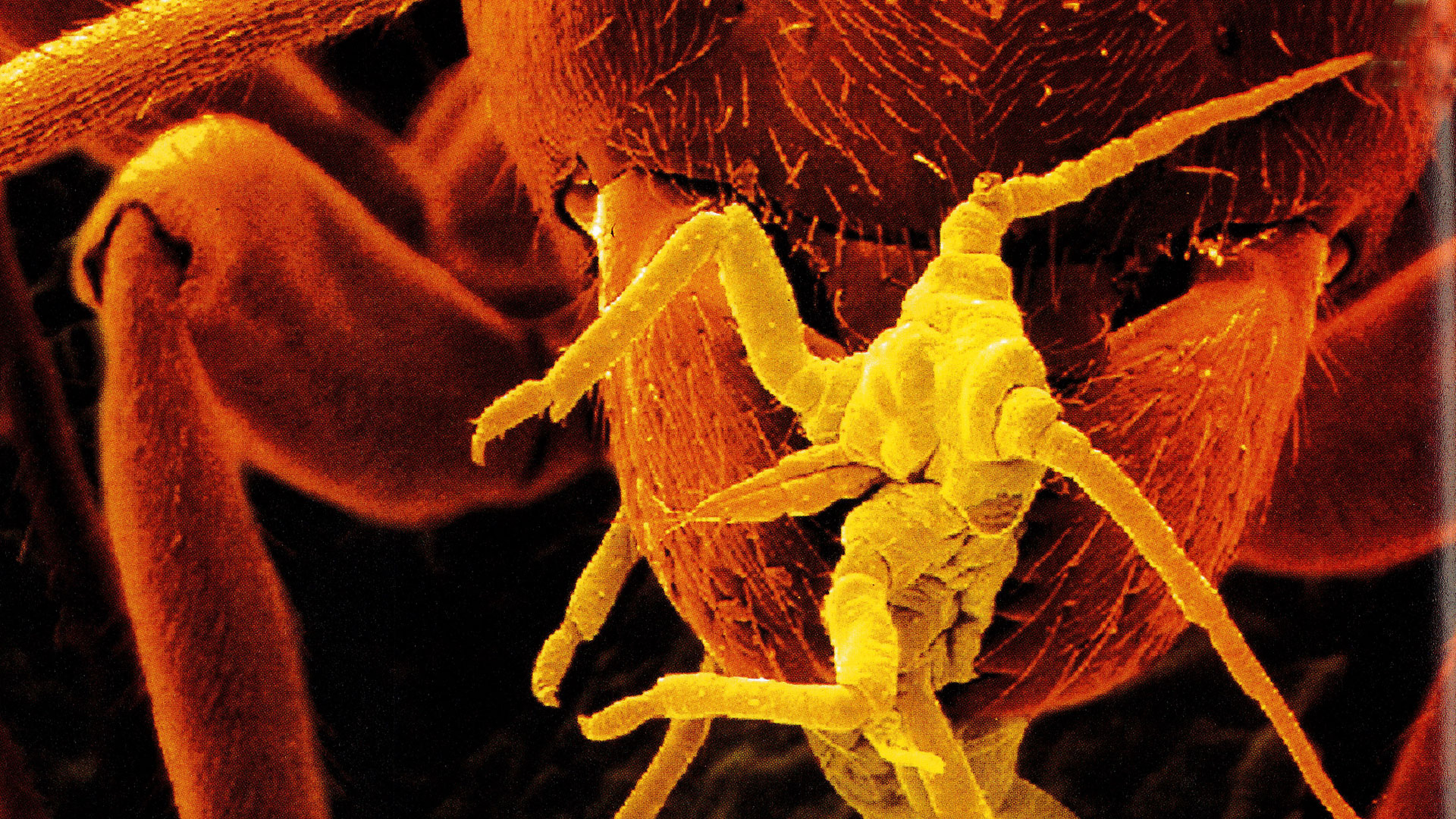 A few generations ago, many of the antibiotics humanity has come to rely on were not yet discovered. Today, a whole new assortment of amazing drugs from our medicinal armory is ranged against infectious diseases. And most people take it all for granted.

Certainly the effects of these advances have been remarkable. At one stage it looked as though infectious microorganisms causing staphylococcal infections, syphilis and tuberculosis, for example, would be entirely eradicated.

Unfortunately, however, infectious organisms are now staging a comeback, building by mutation an impressive resistance to modern drugs. Doctors are now concerned about new drug-resistant organisms, popularly referred to as superbugs.

Should we be worried about some doomsday scenario in which hitherto treatable diseases spread out of control because we no longer possess the means to treat them? How is medical science responding to the threat? And what can the average person do to lessen the chances of infection in the first place?

From Mold to Medicine

In 1928, British bacteriologist Alexander Fleming discovered penicillin—the first antibiotic of the modern era. Fleming had been conducting research on staphylococci and had noticed that Penicillium notatum, a green mold, produced a substance that inhibited the growth of some bacteria. Fleming named the substance penicillin. His discovery ushered in the antibiotic era and revolutionized the field of therapeutic medicine.

A decade later, two other bacteriologists—Howard Florey and Ernst Chain—refined the drug’s production, and in 1941 it was produced commercially. The scientific community hailed penicillin as a wonder drug. As other antibiotics came on-line, they seemed to offer simple cures for various infectious diseases that otherwise might have been fatal or at least left chronic aftereffects—diseases such as bacterial meningitis, puerperal fever, syphilis and rheumatic fever. The new drugs were also indispensable to the development of viable surgical procedures. During the years that followed, many other so-called wonder drugs were discovered.

In the early 1960s, some medical scientists declared that infectious disease had been conquered. For example, at a medical convention in 1962, Australian physician and virologist Sir Frank Macfarlane Burnet asserted, “One can think of the middle of the 20th century as the end of one of the most important social events in history—the virtual elimination of infectious disease as a significant factor in social life.”

But while some in the medical science community claimed such victory, it was clear to others that disease had not been completely defeated. Far from it. Microbiologists soon discovered that bacteria were able to protect themselves against antibiotics by developing various means of resistance. Some bacteria produced substances that either destroyed the antibiotic or rendered it useless. The staphylococci, for example, produced an enzyme called penicillinase that was able to inactivate penicillin.

A second means of resistance was observed in the form of genetic mutations. Bacteria learned to modify their cell walls so the antibiotic could no longer enter. They changed a metabolic pathway that the antibiotic had blocked, or modified the specific molecular target of the antibiotic.

Once genetic changes occur, the surviving microorganism becomes the source of a new, drug-resistant strain that can transfer the resistance to its progeny. When a person takes an antibiotic, the germs will either die or adapt. If they adapt, they transfer that information into the genes, and the next generation of that bacteria will also carry those genes for resistance; then they continue to be passed on through the generations. Rather surprisingly, microbes can also pass these genes on to unrelated microbes. Thus, a mutation that helps a microbe survive in the presence of an antibiotic drug will quickly become predominant throughout the microbial population.

Because of the short time microbes require to mature and produce offspring, microbial populations adapt very quickly to change. This is why many species of microbes are now resistant to drugs that once were used to kill them, though the drugs have been around less than 50 years.

Evidence suggests that, over time, more microorganisms are able to resist the killing power of commonly used antibiotics such as penicillin and tetracycline. Even chloroquine, used against the protozoan that causes malaria, has become largely ineffective over time.

When a strain of bacterium proves resistant to a drug, the physician is obliged to use another antibiotic. “The problem is,” says J. Todd Weber, M.D., senior medical officer at the National Center for Infectious Diseases at the Centers for Disease Control and Prevention (CDC) in Atlanta, Georgia, “as a microorganism develops resistance to one antibiotic, that resistance tends to remain as it progresses to develop resistance to other drugs.”

The more resistant the bacteria and the more capable they are of surviving against the antibiotics in use, the more they can spread.

A strain of bacterium that is resistant to several antibiotics survives more readily in a setting where anti-biotics are frequently used, such as in hospitals, where bacterial strains are usually resistant to most of the antibiotics currently in use. The more resistant the bacteria and the more capable they are of surviving against the antibiotics in use, the more they can spread. The U.S. National Foundation for Infectious Diseases estimates the annual cost of infections caused by multi-drug-resistant organisms to be about $4 billion.

What factors are contributing to the proliferation of multi-drug-resistant bacteria? First and foremost, researchers say, is the overuse and misuse of antibiotics. Some physicians prescribe them when they might not be needed. Indeed, a 1999 study conducted by the U.S. National Institute of Allergy and Infectious Diseases (NIAID) at the National Institutes of Health in Bethesda, Maryland, estimated that half of the 100 million doses of antibiotics prescribed through office-based physicians are not necessary. This means that they are given for viral infections or other types of infections that do not respond to anti-biotic drugs.

To be fair to physicians, the situations they face in the course of their duties are often complex and demanding, so the needed solution is not always simple and straightforward to deliver. Sometimes legal concerns dictate what physicians might consider a safe course of action to avoid potential litigation. Patients can certainly add to the problem by demanding antibiotics for every infection—needed or not. “Sometimes parents and patients are just conditioned to want to have a drug to solve their problems,” says Marissa Miller, D.V.M., M.P.H., the antimicrobial-resistance program officer for NIAID. “So they go in to see their physicians and they demand antibiotics when they aren’t called for.”

“Sometimes parents and patients are just conditioned to want to have a drug to solve their problems.”

Research has shown that antibiotics are used—and misused—most frequently for infections like the common cold, coughs and sore throats. “Antibiotics are properly prescribed only to treat bacterial infections,” states Martin Wasserman, M.D., secretary of the Maryland Department of Health and Mental Hygiene. “Colds and most coughs and sore throats are caused by viruses and should not be treated with antibiotics. Overuse of these medicines makes them less effective for when they are truly needed.” Each unnecessary use of an antibiotic for a cold or flu caused by a viral infection increases the chance that resistant strains might develop among the body’s naturally occurring bacteria.

Even when antibiotics are prescribed appropriately, many patients fail to use them as directed. Some stop taking their medicine after just a few days; some stockpile unused drugs to take later on or to give to others. Stopping antibiotics too early only partially resolves the infection. In addition, it kills only the weak microorganisms, leaving the strong to develop resistance, flourish and perhaps spread through the community.

Adding to the problem is the fact that illnesses for which antibiotics are prescribed—such as childhood ear infections and sinus infections—are on the rise. Miller notes that “the increase of day-care attendance has also provided opportunities for more infections, increased antibiotic use, and the resulting increased spread of drug resistance.”

Hospitals, too, are emerging as fertile environments for the development of drug-resistant pathogens. All too often they lack the scrupulous cleanliness achieved through simple soap and elbow grease of yesteryear. “Close contact among sick patients and extensive use of antimicrobials force pathogens to develop resistance,” notes Rashid Chotani, M.D., a research fellow in microbiology epidemiology at Johns Hopkins Hospital in Baltimore. “Hospital patients typically receive several courses of antibiotics, creating ideal conditions for resistant strains to emerge and thrive. An increasing number of hospitalized patients have weakened immune systems, making them vulnerable to infections with antibiotic-resistant disease agents,” he says.

What makes the situation in hospitals of even greater concern, CDC’s Weber adds, is that hospital personnel often fail to fully comply with current infection control recommendations, such as hand washing. “Without hand washing before and after all contact with patients,” he remarks, “resistant infectious organisms can be transmitted between patients via the hands of the health-care workers, from contaminated equipment, or on environmental surfaces,” he says. He cites a CDC study, which found that when health-care workers were directly observed, only 20 to 55 percent of them followed the CDC’s recommendations on infection control.

“If the arsenal of drugs against infectious diseases loses its power, the future for patients with even a common local infection may become bleak.”

Doctors can no longer count on new drugs to treat resistant infections, because many pharmaceutical companies have reduced or stopped their antibiotic research. “Fewer new antibiotics are being released on the market,” Weber maintains, “partly because of the high cost of developing and licensing them and partly because they have a potentially short life because of the development of resistance. If the arsenal of drugs against infectious diseases loses its power, the future for patients with even a common local infection may become bleak.” It comes as no surprise, then, that new approaches to antimicrobials and to infection-resistant humans is urgently being investigated.

Finally, rapid international travel is also a factor. Increased global travel is transferring drug-resistant organisms between countries at the speed of jet aircraft. “In a day or less,” comments Miller of NIAID, “people can go across the world, and they can carry resistant organisms from far-off lands, bringing them back to their home country.”

Scientists and health professionals agree that decreasing the incidence of antimicrobial resistance will require improved systems for monitoring outbreaks of drug-resistant infections and a more judicious use of antimicrobial drugs. They also recognize the critical role that basic research plays in responding to this problem. We may anticipate the discovery of new and effective means of eradicating infections, based on the systematic search for therapeutic effects of native remedies among the peoples of the world.

For example, studies of microbial physiology help medical scientists understand the biological processes that pathogens use to resist drug treatment. This knowledge could lead to the development of novel strategies to overcome or reverse these processes. Scientists appreciate that we are in a period of vulnerability when our medicinal armory is becoming ineffective in the fight against multiple-drug-resistant microbes. But the urgent search is on for a new generation of effective drugs.

When and if these new strategies become reality, we would be wise to learn the lessons from our recent past: Avoid misuse of antibiotics, and use them in appropriate dosages and for effective periods of time.