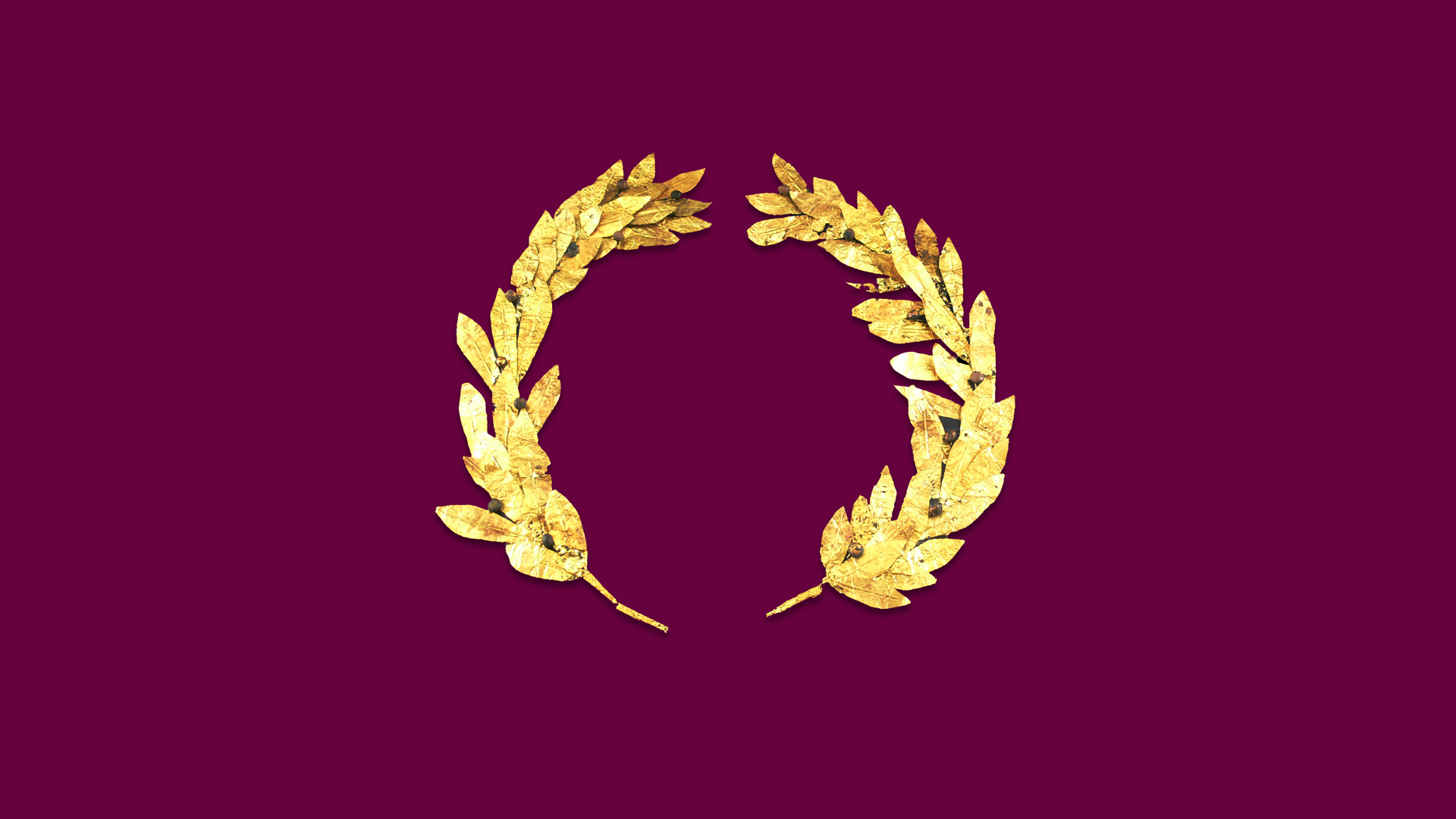 The laurel wreath, or “crown,” of the white horseman spoken of in Revelation 6:2 is a prevalent image among men who would set themselves up as messianic saviors. But where does the idea of a conqueror crowned with a laurel wreath come from?

In Greek mythology the laurel wreath crown was instituted by Apollo, or Phoebus, god of the bow. He was identified with the sun and was a rider of the sun chariot, and thus was also the god of light (the Romans later associated him with their sun god Sol). According to the popular Greek tale, Apollo pursued the unwilling nymph Daphne until she was transformed into a laurel tree. From its branches the disconsolate god made the crown with which he became synonymous.

Apollo’s cult center was Delphi, believed by the ancient Greeks to be the center of the world. Another myth says he acquired the site by killing the dragon Python (possibly stemming from the Greek word pythein, “to rot”). Apollo assumed its power over the oracle, and the body of Python was thought to have rotted and been buried under the victorious god’s new shrine. Thereafter Apollo became known as Pythian Apollo. Devotees of the god sought judgment from his priestess, the Pythia, and when favorable, they “returned home wearing a crown of laurel,” according to the Penguin Dictionary of Symbols.

Another part of Apollo’s myth credits him with instituting the Pythian Games, in which the victors were awarded laurel wreath crowns. These games, held every four years at Delphi, were not limited to physical prowess but also included artistic competitions such as drama, dance, music and poetry. Victors in all these competitions were likewise awarded Apollonian laurel wreaths. Hence we have terms such as poet laureate and Nobel laureate today, each of whom is figuratively “crowned with laurels.”

Links to Apollo among the Greek philosophers are abundant. An influential pre-Socratic, Empedocles, wore an Apollonian laurel wreath on his head and declared his own divinity in his philosophical poetry: “I go about among you an immortal god.” Plato, in his Apology, likewise drew on the Apollo myth. He had his Socrates say that to philosophize “has . . . been enjoined upon me by the god [Apollo], by means of oracles and dreams.” Socrates’ major edict, learn to “know thyself,” was first written on the pronaos, or vestibule, of the temple of Apollo at Delphi. Aristotle, for his part, founded his famous school in a grove sacred to Apollo.

“Like all evergreens, laurels symbolize immortality. . . . As a shrub sacred to Apollo, the laurel symbolized immortality acquired through victory. . . .”

The Greek god was eventually coopted into the Roman pantheon, and his laurel wreath became associated with Victoria, the goddess of victory. Over time, Apollo’s iconic crown came to symbolize “immortality acquired through victory and this is why its leaves were used to crown heroes, geniuses and wise men,” says the Penguin Dictionary of Symbols.

It’s therefore no surprise that many of the would-be saviors of the past 2,000 years, collectively represented by the rider of the white horse in Revelation 6, should be depicted wearing such a wreath. History shows that these individuals came conquering with force, claiming to be heroes, geniuses and wise men who could solve humanity’s problems. Also not surprisingly, many of these false messiahs identified themselves, and have been identified, with Apollo.

For example, in the pagan Roman era that sought to make Rome the center of the world, Julius Caesar (ca. 100–44 BCE), who claimed in life to have descended from the gods, famously took to wearing a triumphal head wreath, an idea he had acquired from the Greeks. It was his military victories that really embedded the cultural association of the laurel wreath with military conquerors.

After his death, Julius Caesar was proclaimed Divus Iulius (Divine Julius), and his great-nephew and adopted son, Caesar Augustus (63 BCE–14 CE), accordingly built a temple to honor him. Augustus, like his father, had coins minted on which he was depicted wearing the laurel wreath; in addition to dubbing himself Divi Filius (son of a god), he actively linked himself with Apollo.

A few centuries later, in 310, an anonymous pagan orator remarked in a speech that Constantine, a founder of Roman Christianity, had seen a vision of Apollo in a temple in Gaul. In 330, Constantine completed the rebuilding of Byzantium as Constantinople, and for a time the city became the new Rome in the East. Historian John Julius Norwich says that “it was, in effect, the centre of the world.” As if to transfer the power of Delphi to his new world center, Constantine took the Serpent Column from Delphi’s temple of Apollo and placed it in his new hippodrome. And with porphyry brought from Heliopolis, Egypt’s “City of the Sun,” he built what we know today as the Column of Constantine; on it stood Phidias’s statue of the sun god Helios, the head of which was refashioned to resemble the “Christian” Constantine, adorned in this instance with a sun god’s halo of radiating sunbeams.

Like other emperors before and after him, Constantine had coins struck that bore his likeness. Some showed Sol on the reverse, with the words “To the unconquered Sun, my companion”; many depicted the emperor with a laurel wreath on his head.

And so the crown of victory passed to successive would-be divine (and ostensibly Christian) messiahs. Charlemagne’s head is likewise adorned with a laurel wreath on coinage. In 1620, van Dyck painted a work titled “Charles V on Horseback” in which an imperial eagle bears the wreath in its beak, placing it on the head of Charles as Holy Roman Emperor. Napoleon, yet another emperor and self-styled savior, is shown in paintings wearing a golden laurel wreath.

This brings us to the 20th century and to modern-day messiahs who patterned themselves on the Roman model. In March 1927 the Milwaukee Sentinel quoted Italy’s then prime minister Benito Mussolini as declaring, “Julius Caesar is my model—my inspiration.” The journalist linked Mussolini with other emperors as well, including Augustus, Nero and Napoleon, reporting that the premier had even “had a bust made of himself wearing an imperial wreath.”

The laurel crown thus serves as a fitting headdress in Revelation’s depiction of counterfeit messiahs who, for the past two millennia, have collectively played the part of the white horse and its rider.