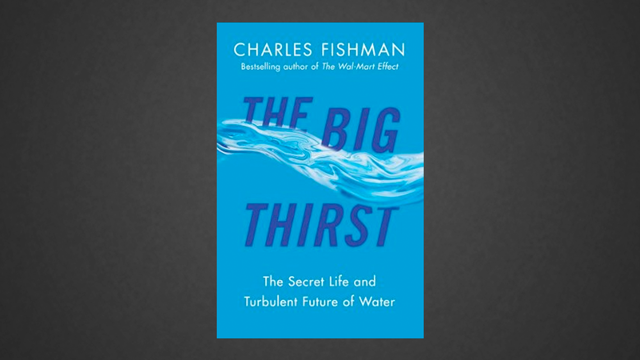 Our planet derives its unique qualities not from earth, but from liquid water. And the Earth’s allotment of water is closed; all there is simply recycles to be used over and over again. If we have a water crisis, it is not because somehow water is being lost. It is a crisis of misuse, neglect and poor planning. It is a crisis of a conflicted relationship.

In The Big Thirst: The Secret Life and Turbulent Future of Water, journalist Charles Fishman reintroduces the reader to life’s most precious resource. Because water is “tirelessly resilient”—its “reusability” and “indestructibility” mean that we can’t really use it up—we must begin to understand the reality of water scarcity as a problem of human choice. “Water itself isn’t becoming more scarce,” he notes, “it’s simply disappearing from places where people have become accustomed to finding it—where they have built communities assuming a certain availability of water—and reappearing somewhere else.”

Access to water for farming, drinking and flushing has been fundamental to the development of human civilization. From a natural perspective, water and temperature are the main limiting factors that determine the structure of ecosystems; these elements influence entire regional biomes by supplying or denying the plant community.

Both, it appears, are in flux and this will affect all of us. According to the United States Global Change Research Program, “Water is an issue in every region, but the nature of the potential impacts varies. Drought, related to reduced precipitation, increased evaporation, and increased water loss from plants, is an important issue in many regions, especially in the West. Floods and water quality problems are likely to be amplified by climate change in most regions. Declines in mountain snowpack are important in the West and Alaska where snowpack provides vital natural water storage.”

Government reports aside, as long as it flows from the spigot, most of us pay little attention to water; it is a forgotten relationship, Fishman says. Water should be a universal Facebook friend. Instead, our connection with water is so fundamental it has become invisible—except of course on the farm or in a part of the world where taps do not flow on command. As with many misaligned relationships, with familiarity has come neglect and abuse. “[I]n the United States and the developed world, we’ve spent the last hundred years in a kind of aquatic paradise: our water has been abundant, safe, and cheap.” This was the “golden age of water,” Fishman notes and observes that this time is coming to an end.

“Everything about water is about to change—how we use water, how we share it, and how we think about it,” he concludes. “That makes it a vital moment to understand where we’ve been, and to imagine how our water future might be different, and why.”

Water is the key ingredient for life; like our planet’s surface, cells are about two-thirds water. This is one of those invisible facts, Fishman notes, facts that our golden age of water manipulation has allowed us to forget. We make our implicit, hidden need and love of water explicit, however, in various displays of beauty and power. In Las Vegas, Nevada, for example, Fishman describes the Bellagio hotel’s famous fountains shooting forth “rippling curtains of water” up to 400 feet high. Each night, he continues, “you can stand on the sidewalk, in a town where not a single month averages even one inch of rain, and watch a fountain that, at any given moment, lofts 17,000 gallons of water into the air.”

This amazing display frames much of Fishman’s theme: visibility brings recognition; recognition brings value; and value brings care. “Far from being decorative or frivolous, in fact, a particularly brilliant fountain can restore, however briefly, your full appreciation of water, can instill a sense of respect and humility, along with a smile, for the lubricant of our lives.” A few tens of miles to the southwest, he charts out the path of that water to its beginnings at the great wedge of Hoover Dam. Confining the Colorado River to create Lake Mead, that finger of cement sustains fountains, moats, a faux Hudson River and supplies multiple millions of the desert West with electricity, drinking water and irrigation.

Of course, these uses can be seen as in conflict with each other; and they are. But thinking of water as a global crisis is not going to solve the problems, Fishman argues. “All water problems are local,” he says. “That allows a certain shrugging resignation about water problems somewhere else, anywhere else,” says Fishman. “One billion people don’t have access to water as good as what’s in my toilet tank, and that’s terrible, but there’s not much I can do about it.”

What we can do, Fishman suggests, is note our successes and press forward locally knowing that what we do change can have a positive effect. The most important change will be to use water more strategically. “One of the most striking changes in our relationship to water in the next hundred years will likely be that we will start using the right water for the right purpose.”

Fishman’s take on this reality is not one that projects urgency. At first, when the stridency goes missing, the reader may find the writer’s more tempered tone amiss. It has become common in “crisis” literature (there are shelves of books urging immediate panic over this or that) to sense the author yelling, hitting the keys. But Big Thirst is not a tsunami of dread; it is the wave of a peace offering that suggests that we get to know water again—a reintroduction to what water is, what it does, how we treat and mistreat it. Then we can get to practical pricing schemes and new approaches that attach value rather than invisibility to water use.

Of course, Fishman ultimately wants to help us change our profligate ways, but not by hammering us with science, statistics or even poignant stories. He certainly uses all of these things, but in reasonable and engaging ways. “We desperately need a fresh way of thinking about water,” Fisher advises, “Or, more realistically, a starting point for thinking about water. Most of us haven’t ever thought about it very much.” He then cautions that we need to begin to do so, however, “because the fate of water is our fate.”

Echoing the restrained optimism Jared Diamond concludes with in Collapse: How Societies Choose to Fail or Succeed, Fishman ends on a positive note. “Many civilizations have been crippled or destroyed by an inability to understand water or manage it. We have a huge advantage over the generations of people who have come before us, because we can understand water and we can use it smartly.”

“Water will stretch in remarkable ways,” Fishman promises, “if the people handling it are smart enough and demanding enough to insist on it.”

Smart here implies use rather than abuse, and a sense of connectedness rather than entitlement. These can be summed up as right relationships, a nuanced theme that runs throughout the book. The “give and take” between humankind and the earth has been mostly “you give, we take; we demand and you supply.” To understand that everything does not come to us without cost has been a long-coming realization that is not yet fully understood.

Like that first glass of water after coming in from a hot day, The Big Thirst is refreshing. Not bogged down in science or crisis, it is an optimistic and original look at our most important resource. That in itself is doing us all an important service. It’s not water that’s in trouble; it’s us. “It’s water we’re talking about, so there will be no avoiding the change,” Fishman concludes. “What we can choose is the time and the approach and the level of panic.”