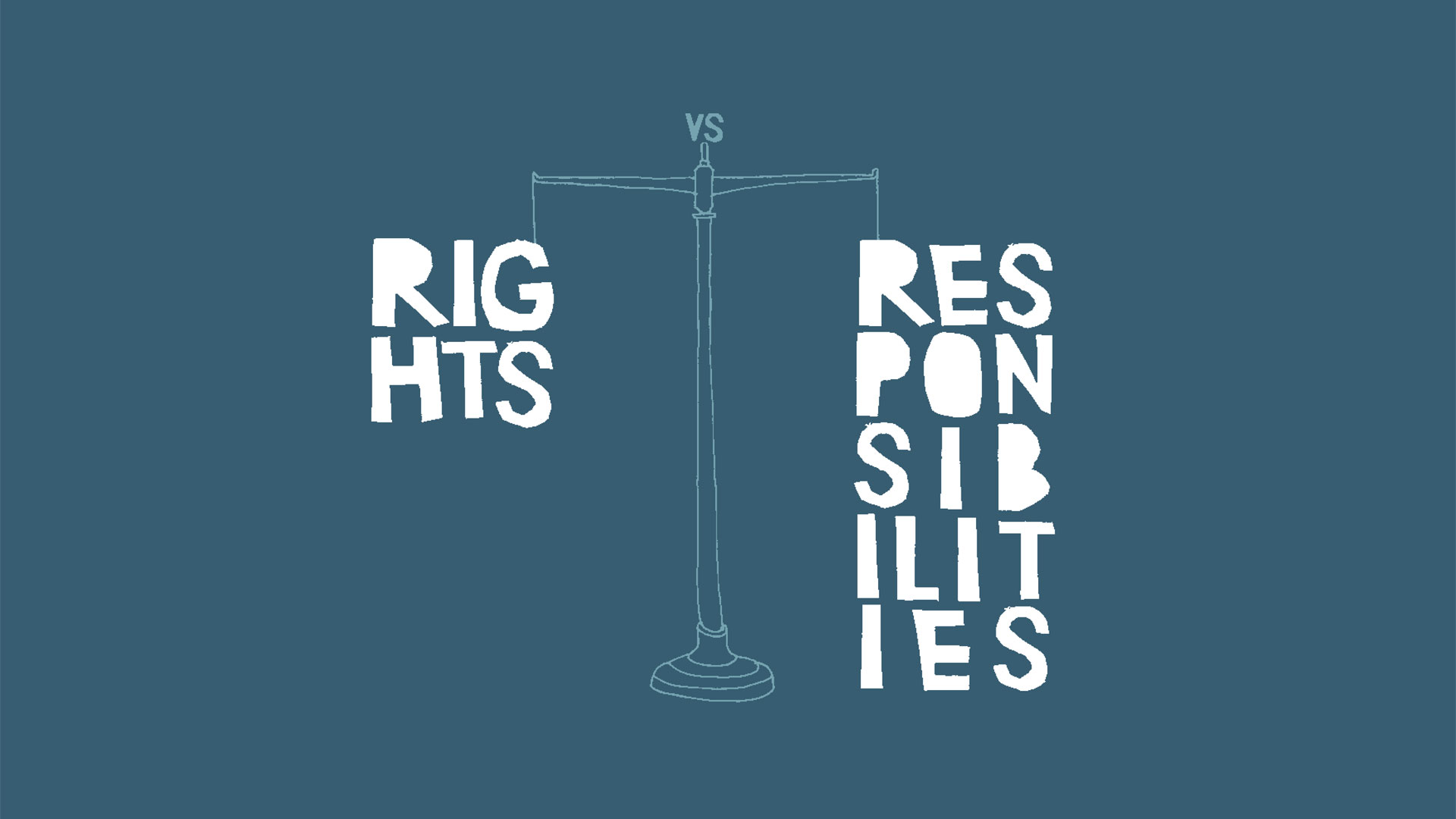 Human rights. We hear about them constantly these days, often in a global context. Yet according to Eleanor Roosevelt, they begin “in small places, close to home—so close and so small that they cannot be seen on any maps of the world.”

She went on to say in her 1948 address before the UN Commission on Human Rights that “they are the world of the individual person; the neighborhood he lives in; the school or college he attends; the factory, farm, or office where he works. Such are the places where every man, woman, and child seeks equal justice, equal opportunity, equal dignity without discrimination. Unless these rights have meaning there, they have little meaning anywhere.”

The UN’s Universal Declaration of Human Rights, now 60 years old, was not the first attempt to legislate human rights on an international scale. The post–World War I League of Nations Covenant required members to “endeavour to secure and maintain fair and humane conditions of labour for men, women, and children,” “secure just treatment of the native inhabitants of territories under their control,” and “take steps in matters of international concern for the prevention and control of disease.” Out of these provisions grew the work of the UN’s International Labor Organization.

Since 1948, much has been said and written about human rights, and organizations such as Amnesty International have worked tirelessly to combat flagrant violations.

The prosperous nations of the Western world have never been more focused on rights. Many people would therefore say we’ve come a long way since the UN’s Universal Declaration.

But have we? Could this focus on rights have some adverse effects? Consider the litigious and predatory legal systems of the Western world, with the United States leading the way. And the sclerotic labor rights in European nations such as France and Germany are anything but an undisputed victory for the community at large.

Is the obsession with rights creating a better society? Surely we should all be happier by now. But society is increasingly self-centered and dangerous, and happiness for many is more elusive than ever.

Who’s Right About Whose Rights?

The value of certain human rights seems self-evident: the rights of people not to be tortured or abused, freedom of speech, freedom of worship, freedom of political association.

“All human beings are born free and equal in dignity and rights. They are endowed with reason and conscience and should act towards one another in a spirit of brotherhood.”

But what happens when perceived rights conflict with one another? Rights are often in the eye of the beholder, with some of them clearly demonstrating a perplexing and perhaps even contradictory side.

As just one example, take the now almost unquestioned right to freely cohabit without a commitment to the formality of conventional marriage. The statistics are now clear and undeniable: cohabitation is far more likely to lead to outcomes such as single parenthood, deprived childhood and dependence on welfare. Single parenthood is itself increasingly a lifestyle choice, but with the same outcome: greater dependence on welfare. And it is the traditional two-parent families and those on middle incomes who bear the brunt of the tax bill.

Take another, even more controversial clash of rights: the rights of individuals to live homosexual lifestyles on the one hand, and the rights of some in religious faiths such as Christianity and Islam to believe and teach that homosexual acts are sin on the other. These rights have increasingly come into conflict in such areas as ordination, definitions of marriage, and what children are taught or not taught in faith-based schools.

On what basis can we seek resolution when the perceived rights of two individuals or groups violate one another?

One can’t help but conclude that rights require a context, a framework, to be meaningful and workable. So what about that other R, responsibility?

“Strengthening rights is dependent on strengthening the connections, conceptually and behaviorally, between rights and responsibilities.”

It’s not that a relationship between these two words is not understood; just search the phrase “rights and responsibilities” on the Internet and you will get well over a million results to scroll through. Dig deeper, however, and you’ll realize how superficial and circular the definitions of “responsibilities” generally are. Most of them are limited to the responsibility to allow others the same rights that we expect for ourselves. In other words, others’ rights are dressed up as our responsibilities. Of course, it would be hypocritical not to allow others the same rights we expect for ourselves, but is that all there is to responsibility? Is that enough to avoid or resolve conflicts of the sort just described, or does the foundation on which rights exist lie deeper still?

As laws, proclamations and politically correct pressure groups rain supposed rights on ever more narrowly defined and exclusive groups and causes, it is a sure sign that we are forgetting how the very freedoms we take for granted were preserved through the centuries; namely, by the responsibility and self-sacrifice of our predecessors.

Have self-fulfillment and political correctness replaced that deeper, lasting set of values that overarches and simultaneously underpins individual rights? Apart from a few brave and increasingly lonely voices, it appears that even many of our religious and governmental institutions are abandoning, indeed sometimes uprooting, the moral underpinnings of society that were once considered every person’s solemn duty to uphold. The warning voices that do sound forth are usually not those of killjoys wanting to make life miserable for the sake of it, but of those who foresee, and warn about, the damaging outcomes of our self-indulgence.

“Converging with the language of psychotherapy, rights talk encourages our all-too-human tendency to place the self at the center of our moral universe.”

British writer and philosopher Anthony O’Hear has demonstrated significant insight into where our pursuit of rights without corresponding responsibilities has taken us. “Could it be,” he asked in his book After Progress, “that the type of material and political progress on which we pride ourselves is actually the cause of spiritual and aesthetic decline? . . . Could the root cause of our discontents be lack of inner resources, rather than higher expectations of life?” O’Hear puzzles that the nation that produced such great artists as Turner and Constable should now put animal corpses and images of human excrement on display as art, presumably because of the right to free expression.

He reflected on “the obsessive harping on happiness in a material sense, which makes our life today so mediocre in so many ways, which forgets that what is really worthwhile can be achieved only through struggle and suffering, that there are aims in life higher than the elimination of pain and the cultivation of pleasure.” Again a particular right seems to be at the root of the problem—this time the right to achieve material happiness.

Other voices have also lamented the corrosive effect of this blinkered focus on rights and self-fulfillment. W.A. Borst, author of Liberalism: Fatal Consequences, wrote of the United States: “A nation which had set up a near-perfect and flexible government is now finding common sense more endangered than the snail darter. Lawyers have hamstrung society with nit-picking minutiae. . . . This lack of common sense has led inevitably to a rights revolution, where only selfishness and personal interest seem to reign supreme.”

Consider, by way of illustrating the point, that hate-object of political correctness, the beleaguered conventional two-parent family. The present British government and its politicized civil service, particularly the welfare system, often refuse even to discuss publicly the traditional two-parent family. So where is the place for teaching and upholding the spiritual, moral and social responsibilities of fatherhood? And does providing state financial support for unmarried mothers really match teaching teens that waiting until marriage for sex and children is still by far their (and their offspring’s) best chance for security, success and happiness? Why won’t governments and churches preach that message when the miserable results of the alternatives glare out from all recent statistics?

Many American and British moral, legal and constitutional concepts are still based, however loosely, on biblical heritage. While that heritage has arguably suffered from faulty transmission over the centuries and has been much maligned and eroded recently, many of our laws and concepts of truth and morality owe a great debt to the underlying concepts and ultimate authority of the Bible.

Before we allow what remains of that heritage to be swept away for good, it is worth reflecting on the effects of digging up the historic roots of moral and cultural values that once went unquestioned. The results of liberal social engineering are not encouraging.

There is a ducking of issues, particularly by certain politicians, clerics and others, when it comes to exercising responsibility at the most personal levels. To demonstrate, try this comparison. First, consider the ever-widening ban on smoking in public places. Why is it banned? Because undeniable statistics show that it is harmful to innocent parties (nonsmokers), not to mention to smokers themselves. The message is “If you have to endanger your health, don’t also endanger mine.” We are perfectly capable of doing the math on the results of active and passive smoking and judging that smokers shouldn’t be allowed to harm others as well as themselves. The logic is inescapable.

Now take the same logic and apply it to sex. Why should those who exercise prudence and common sense in their sexual relationships pay a price when others don’t? Why should society be expected to pick up the tab for casual sex any more than it should pick up the tab for smoking? A compassionate society rightly continues to provide treatment for smoking-induced illnesses, but increasingly the responsibility is being placed back on smokers, who pay the social price of bans in public places and the financial price of increased insurance premiums. Why should it be so different with other lifestyle choices such as cohabitation, casual sex and deliberate single parenthood?

This argument will likely arouse the rage of various rights activists, but if we reasonably hold people responsible for their own actions, and respect the rights of those who otherwise have to unfairly bear the costs, then we have taken a critical first step toward eliminating some otherwise insoluble clashes of rights.

Clearly all social ills can’t be blamed on cohabiting couples and single mothers; the example merely demonstrates how hopelessly bent out of shape discussions about rights and responsibilities have become. Surely responsibilities are not primarily about ensuring that others enjoy the same rights as oneself, but rather about exercising social and moral restraint so that others do not bear costs and penalties for one’s own actions, decisions and lifestyle choices.

Our narrow and selfish preoccupation with rights is a moral, spiritual health warning that all is not well with our society. In earlier ages, people focused on their moral and social responsibilities rather than complaining about their lack of rights. They also expected others to behave in the best interests of society. It worked because there was a clearer understanding that responsibilities before God and man for one’s own actions trumped rights every time. And peer pressure (not to mention legal enforcement) strengthened that concept.

We need to apply Eleanor Roosevelt’s astute observation on rights to responsibilities. Like rights, they also begin “in small places, close to home—so close and so small that they cannot be seen on any maps of the world.”