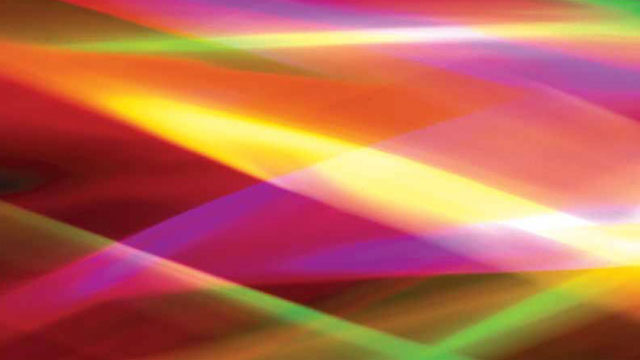 One scenario Einstein often used in thinking through his mental puzzles involved a passenger on a train and a stationary observer watching the train pass by. The physicist imagined a train traveling near the speed of light on an infinite straightaway. If a passenger switched on a flashlight, how fast would the beam of light travel? How would someone on the train experience this event compared to someone standing on the platform?

For our mental experiment, imagine that the beam is aimed into a box of mirrors aligned in such a pattern that it takes one second for the light to emerge from the other side of the box. Einstein concluded that from an inertial frame of reference (that is, from a position of constant speed and direction), the passenger inside the train would measure the time through the box as expected: one second. Just as a traveler is not concerned with the speed of the aircraft when pouring an in-flight can of soda (provided the airplane is not turning or otherwise changing velocity), the speed of the train through space would have no bearing on how the passenger measures the motion of light.

But what would a stationary observer see from outside the train? In his Special Theory of Relativity (“special” because it explains observations only under conditions of constant velocity), Einstein explained how one person’s measurements of time and distance must differ from those of another in order that they both measure the same value for the speed of light.

Rather than making all things variable and subject to interpretation, however, Special Relativity concerns only the invariance of the speed of light. The theory shows that spatial and temporal measurements are relative, based on the observer’s position, so that the speed of light is always the same and never exceeded.

This means that time and distance vary according to the observer’s frame of reference. Different observers are never in exactly the same position to view any particular event. Each observer will therefore draw different conclusions concerning the time and distance that relate to an event. Because there is no universal clock against which an event can be measured, we can identify the event’s timing only by the clock associated with our own frame of reference. That clock is always calibrated by the speed of light: nearly 300,000,000 meters per second.

In the case of the train, the faster it travels, the slower time passes on the train as viewed by the stationary person outside the train. From outside, the light emerges after passing through both the box and the space the box itself has passed through. The observer’s clock must record more elapsed time than the passenger’s clock, otherwise the light would have to travel faster to pass through the greater distance. If the two observers could compare their observations later, they would judge the one event—the emergence of the light from the box—to have been two, occurring at different times and at different points in space.

The suggestion that “fast clocks run slow” continues to bewilder because it is counterintuitive. How can moving faster through space somehow slow the movement of time?

The theory has been verified by comparing extremely accurate atomic clocks on airplanes and identical ones that sit stationary on the ground. After a number of flights aboard a plane, the two clocks are compared and the one on the plane shows less time elapsed. The people on the plane have, in fact, aged less than the people left behind on the ground. However, as memorably stated by cosmologist Stephen Hawking in The Universe in a Nutshell, if you think you can increase the length of your life by constantly traveling on aircraft, “the tiny fraction of a second one would gain would be more than canceled by eating airline meals.”