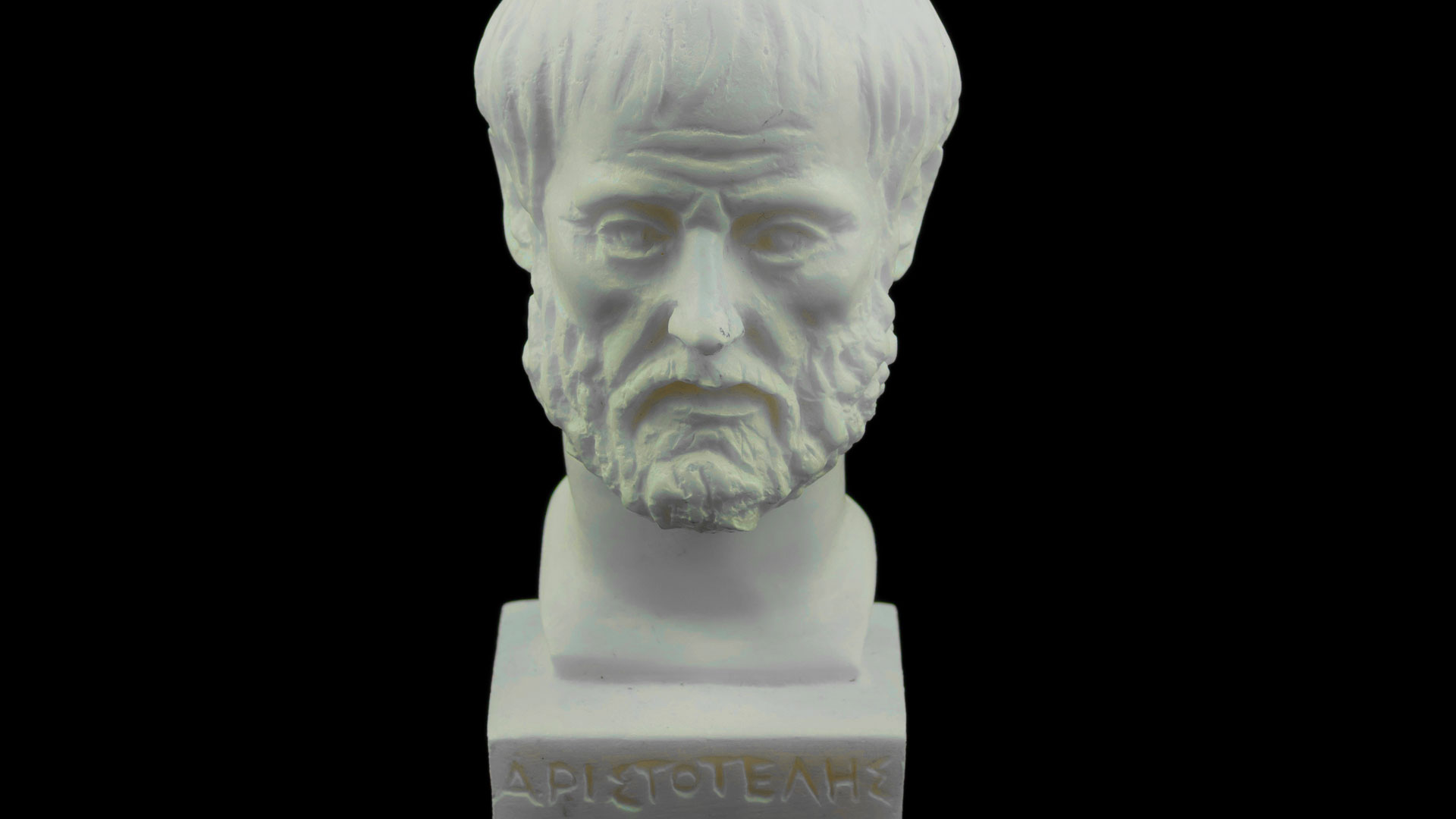 Although Aristotle came at the end of the initial flourish in Greek philosophy, his legacy holds incredible sway today. His written works range from politics, logic, psychology and ethics to poetry, rhetoric, biology and physics. His influence has been equally diverse; he still casts a long shadow over the disciplines of science, philosophy, psychology and theology. Spanish philosopher Julián Marías suggests that “more than anyone else, Aristotle determined the subsequent course of the history of philosophy, and from this point on we will find him everywhere.”

Born at Stagira, Macedonia, in 384 B.C.E., Aristotle was the son of Nicomachus, court physician to the Macedonian king. At about the age of 17 he entered Plato’s Academy in Athens and remained there until Plato’s death 20 years later. Though Aristotle may have expected to be named Plato’s successor as head of the Academy, he was passed over; he left Athens in 347 to take up residence at Assos at the invitation of its king, Hermias.

Having married Hermias’s niece Pythias, Aristotle moved to Mytilene on the isle of Lesbos in 345. Between 343/2 and 340, he served as tutor to the young Alexander the Great at the request of Alexander’s father, Philip II of Macedon. In 335 Aristotle returned to Athens and founded a school in a grove sacred to Apollo Lyceus (called the Lyceum). Here he built what is widely regarded as the first great library of antiquity and engaged in many researches.

The death of Alexander in 323 and the subsequent rise of anti-Macedonian feeling in Athens resulted in the philosopher’s departure to Chalcis, where he died the following year. According to the Oxford Dictionary of Philosophy, he was remembered as “bald, thin, with a lisp, and of a sardonic disposition.”

A key difference between Aristotle and those who went before him—namely the pre-Socratics, Socrates, and Plato—was his distaste for mysticism as a means of explaining the world at large. Aristotle, as a professional teacher, presents himself as altogether more systematic, critical and methodical than his predecessors. He is professorial in tone, not prophetic. Russell notes that “the Orphic [mystic religious] elements in Plato are watered down in Aristotle.”

Underpinning Aristotle’s extensive and wide-ranging writings is his view of metaphysics, though the work we refer to as the Metaphysics was not so called by him. Later generations named it that because it came after the Physics and/or because it went beyond the physical. At times Aristotle himself refers to what we call metaphysics as “theology”; however, this is not theology in a modern sense. The Greeks had no word for religion, and Aristotle was completely cut off in time from the development of Christianity, having preceded the birth of Jesus Christ by more than 300 years. As mentioned earlier, Aristotle’s school, the Lyceum, was founded in a grove of Apollo Lyceus; in other words, Aristotle was a product of the pagan Hellenic world.

While the Metaphysics is in one sense a departure from the mysticism found in the pre-Socratic poet-prophet-thinkers who predated the Orphically influenced Plato, Aristotle’s Metaphysics is nonetheless defined in large part by these earlier thinkers and the concepts and concerns that informed and accompanied their mystically inclined thought. Aristotle is critical of his predecessors but often thinks within the context of (and engages with) the problems of their world.

His views of God find a frame of reference in such notions as “the one and the many,” discernible in the earlier writings of Anaximander, Heraclitus, Empedocles and Plato. But at the base of Aristotelian metaphysics lies the abstruse concept of the “Unmoved Mover.” Marías attempts an explanation of the concept: “The God of Aristotle is the absolute moment of the world. His mission is to make motion possible and, even more, to make possible the oneness of motion; it is he, then, who makes there be a Universe. But God is not a creator; this idea, which will mark the deep difference between Hellenic and Christian thinking, is foreign to Greek thought.” In fact, “the God of Aristotle exists separately and consists of pure theoria, in thought of thought or vision of vision. . . . All of Aristotle’s philosophy culminates in this theory.”

Richard E. Rubenstein, a scholar specializing in religious and social conflicts, states that “at bottom, Plato’s deity, called ‘the One’ or ‘the Absolute’ by the Neoplatonists, is no more personal a God than Aristotle’s Unmoved Mover.” Russell notes that in the Metaphysics, “astronomical considerations lead to the conclusion that there are either forty-seven or fifty-five unmoved movers. The relation of these to God is not made clear; indeed the natural interpretation would be that there are forty-seven or fifty-five gods.” The entertainment of such a theology should certainly highlight what Marías calls “the deep difference between Hellenic and Christian thinking.” This Greek way of thinking is not in any sense compatible with the Bible.

Unfortunately, later thinkers didn’t see the two approaches as incompatible. Thus, in the hands of some of Aristotle’s successors, his metaphysics proved quite explosive.

The move to blend Hellenic philosophy with theology began in the early centuries of the current era and persisted in medieval Europe and the Near East. Yet for more than a thousand years after his death, Aristotle’s works were largely forgotten, at least in the West. Bar a handful of minor texts preserved and translated by Roman scholar Boethius, his writing was unattainable in the Christian world. During this time, Platonic-styled theology held sway in a society where the sources of knowledge—including Aristotle’s works—were constrained behind monastery walls. The first to rediscover Aristotle were Muslim and Jewish thinkers and commentators. From the ninth century, scholars in places like Toledo and Baghdad’s “House of Wisdom” translated not only his works but those of other significant Greek writers.

“Among Aristotle’s greatest exponents during the early period of his reintroduction to the West, Albertus Magnus, and above all his student Thomas Aquinas, sought to reconcile Aristotle’s philosophy with Christian thought.”

The ideas they encountered were by no means familiar, nor were they widely welcomed. The idea of a distant, abstract, Unmoved Mover smacked of pantheism, while Aristotle’s focus on natural science and his claim that reason was all humanity needed to secure happiness seemed to do away with the need for theology altogether. Ultimately this was too much for Islamic and Jewish leadership, who marginalized the disciples of Aristotle and eventually snuffed their influence within their ranks.

It is ironic that the chief among these disciples are now cited as some of the most important of their day. The work of Jewish philosopher Maimonides, who wrote the unashamedly Aristotelian Guide for the Perplexed, and Muslim philosopher Averroës, who wrote at least 38 commentaries on Aristotle’s works, survived and was eventually discovered by the Christian world. Arriving four hundred years late to the resurrection of Aristotelian philosophy, Christian theologians devoured this “new” learning and exploited the extensive work that Averroës and others had done in reconciling Aristotle’s thought to a monotheistic outlook. They gradually concluded that there could be no contradiction between natural law and theological law, and thus set out to square the two perspectives.

The movement did not go unopposed. The leadership in Rome begrudged, then discouraged waves of fresh interpretations of Scripture influenced by Aristotelian ideas; but their opposition was rarely totalitarian. They sought to critique (itself an aspect of the Aristotelian method) rather than censor revolutionary ideas. According to Rubenstein, they “brought a potentially hostile force inside the Church-run universities, where it could be watched, controlled, and used.”

What resulted was the gradual incorporation of the new ideas into Christian thought. Thomas Aquinas, perhaps the most famous and influential of Aristotle’s adherents, rocked conventional thinking by claiming that almost everything was subject to rational inquiry (the Trinity being one of a few notable exceptions). It was a brief moment of near harmony between what we now call science and religion.

Peter Abelard, Francis of Assisi, Siger de Brabant, Albertus Magnus, Thomas Aquinas—each churchman formed a successive wave of Aristotelian thought to refute a previous wave, with ever decreasing reference to Scripture. In Christianity, reason and theology did not entirely fuse and eventually split entirely in the Enlightenment, but this was all for the eventual benefit of Aristotle, whose ideas thrived in the creative tension.

This tension was, at base, a debate between methods of attaining knowledge: one divinely revealed, the other gained by rational inquiry. This debate remains prominent today and is a significant aspect of Aristotle’s legacy. It is instructive to note how the pursuit of humanly derived knowledge shaped mainstream Christianity, distorting biblical ideas out of all recognition.