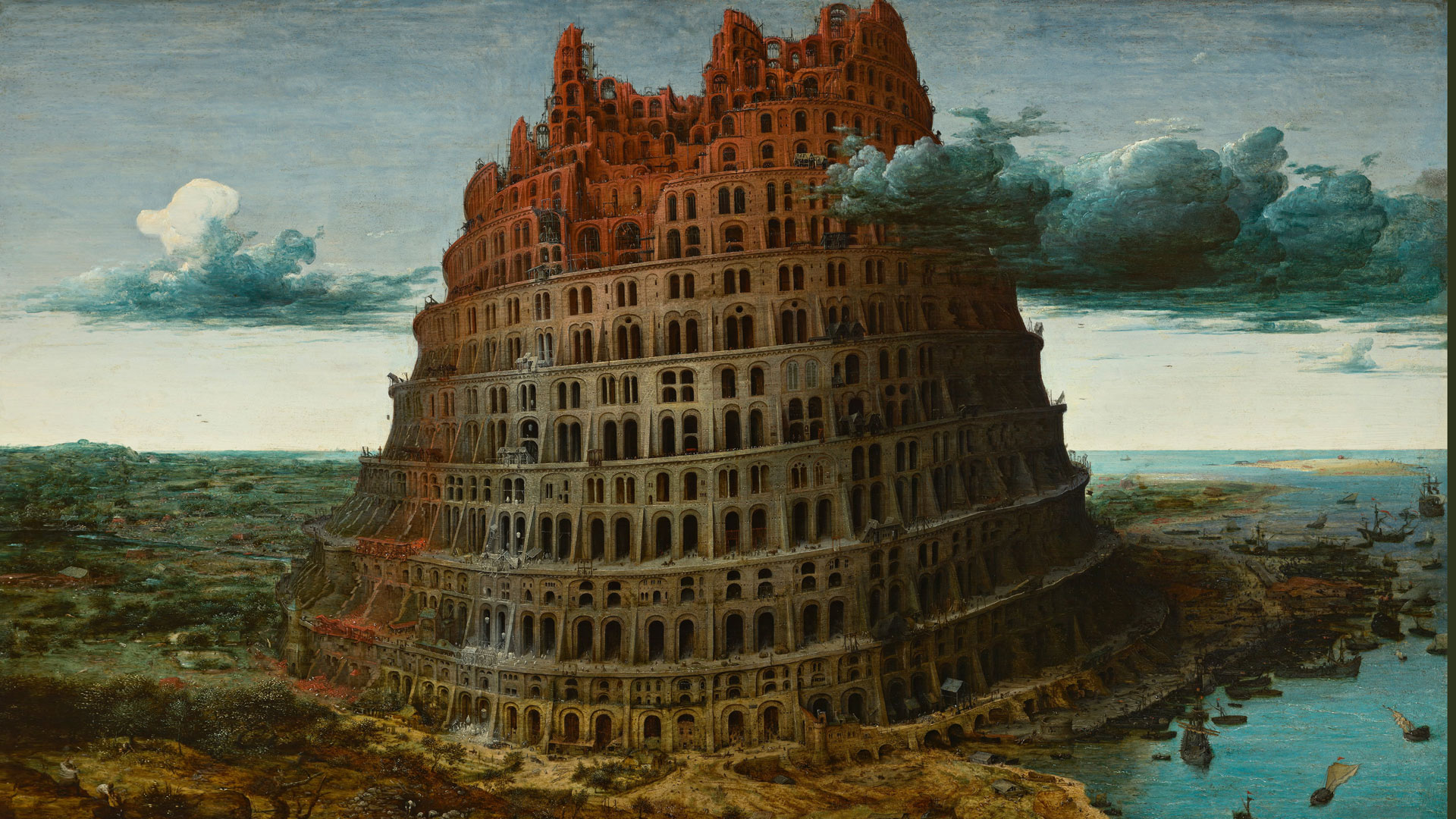 It’s an enduring image in Western culture. A quick search of the Internet reveals the fascination the Tower of Babel has held for us for century upon century. One website actually has a timeline of references to Babel stretching from 5000 B.C. to A.D. 2001. They include works of art, music, literature, philosophy, speeches, news items and movies that have carried the theme of ill-conceived and prideful human goals.

The fact that the image has such a long-lasting quality informs us perhaps that the building has a much deeper meaning. There must be something remarkable about a biblical account of an ancient building project that has outlasted the post-Enlightenment rejection of religious belief.

How did the story of the tall tower begin? The Bible’s book about origins, Genesis, tells us that early in human history one of the sons of Noah had a great-grandson named Nimrod. He is described as a man of considerable reputation and leadership. “Nimrod . . . became a very powerful man on earth. He was a great hunter before the Lord, which is why people say someone is ‘like Nimrod, a great hunter before the Lord.’ At first Nimrod’s kingdom covered Babylon, Erech, Akkad, and Calneh in the land of Babylonia” (Genesis 10:8–10, New Century Version throughout). Some have seen his relationship with God in the negative, translating “before the Lord” as “against the Lord.” Perhaps this is because Nimrod is presumed to be the builder of the first Tower of Babel, at which time humans challenged God by figuratively reaching into the heavens.

In the Genesis account there are some familiar resonances with later Babylonian building methods as well as attitudes: “At this time the whole world spoke one language, and everyone used the same words. As people moved from the east, they found a plain in the land of Babylonia and settled there. They said to each other, ‘Let’s make bricks and bake them to make them hard.’ So they used bricks instead of stones, and tar instead of mortar” (Genesis 11:1–3). We know from the ruins of 6th-century-B.C. Babylon, excavated in the 19th and 20th centuries, that hard burnt bricks were used in the city’s construction, along with asphalt or tar as mortar.

The biblical account continues with commentary on the attitude of the earliest dwellers at Babylon: “Then they said to each other, ‘Let’s build a city and a tower for ourselves, whose top will reach high into the sky. We will become famous. Then we will not be scattered over all the earth’” (Genesis 11:4).

We also know that similar ideas related to the rebuilding of a tower in Babylon by King Nabopolassar (reigning ca. 625–605 B.C.) and his son Nebuchadnezzar (605–562 B.C.). The father, founder of the Neo-Babylonian Empire, set about rebuilding the ruins of a stepped tower, or ziggurat, named Etemenanki. According to the New Bible Dictionary, Etemenanki is Sumerian and means “the Building of the Foundation-platform of Heaven and Earth” “whose top reaches to heaven.” It was connected with the temple of Marduk, known as Esagila, which, again according to the New Bible Dictionary, means “the Building whose top is in heaven.” Nabopolassar wrote a devotional inscription found at the site, which reads in part, “Marduk, my Lord, ordered me to secure the foundation of Etemenanki, the Ziggurat of Babylon . . . and to let its summit vie with the heavens.” Nebuchadnezzar, in completing the work, intended from his words that the building last “for eternity.”

The concept of a human construction of any kind that vies with God and His purpose carries with it perhaps the unconscious awareness that something is amiss in humanity’s relationship with Him. It is also the case that we humans take delight in overcoming visible odds, and in our own grand achievements. Perhaps these two impulses explain the longevity of the image and our continuing fascination with it.

Visual applications of the timeless icon include The Little Tower of Babel created by Pieter Bruegel the Elder (ca. 1525–1569), who was part of a European movement of painters specializing in works featuring the tower. Bruegel had visited Rome and based his work on his impressions of the Colosseum. Twentieth-century Dutch artist M.C. Escher (1898–1972) created his own interpretation of the tower in 1928. The Council of Europe used the ancient symbol in a poster based on a second painting of the tower by Bruegel. It also appeared in the Autumn 1996 issue of International Currency Review, a journal of the world financial community.

The ongoing human fascination with the tower notwithstanding, God was not pleased with its construction. As Genesis records, “The Lord came down to see the city and the tower that the people had built. The Lord said, ‘Now, these people are united, all speaking the same language. This is only the beginning of what they will do. They will be able to do anything they want. Come, let us go down and confuse their language so they will not be able to understand each other.’ So the Lord scattered them from there over all the earth, and they stopped building the city. The place is called Babel since that is where the Lord confused the language of the whole world. So the Lord caused them to spread out from there over the whole world” (Genesis 11:5–9).

It was not so much the physical structure nor the effort put forth in its construction, but the hubris—the arrogant, pride-filled attitude of the builders—that God opposed.