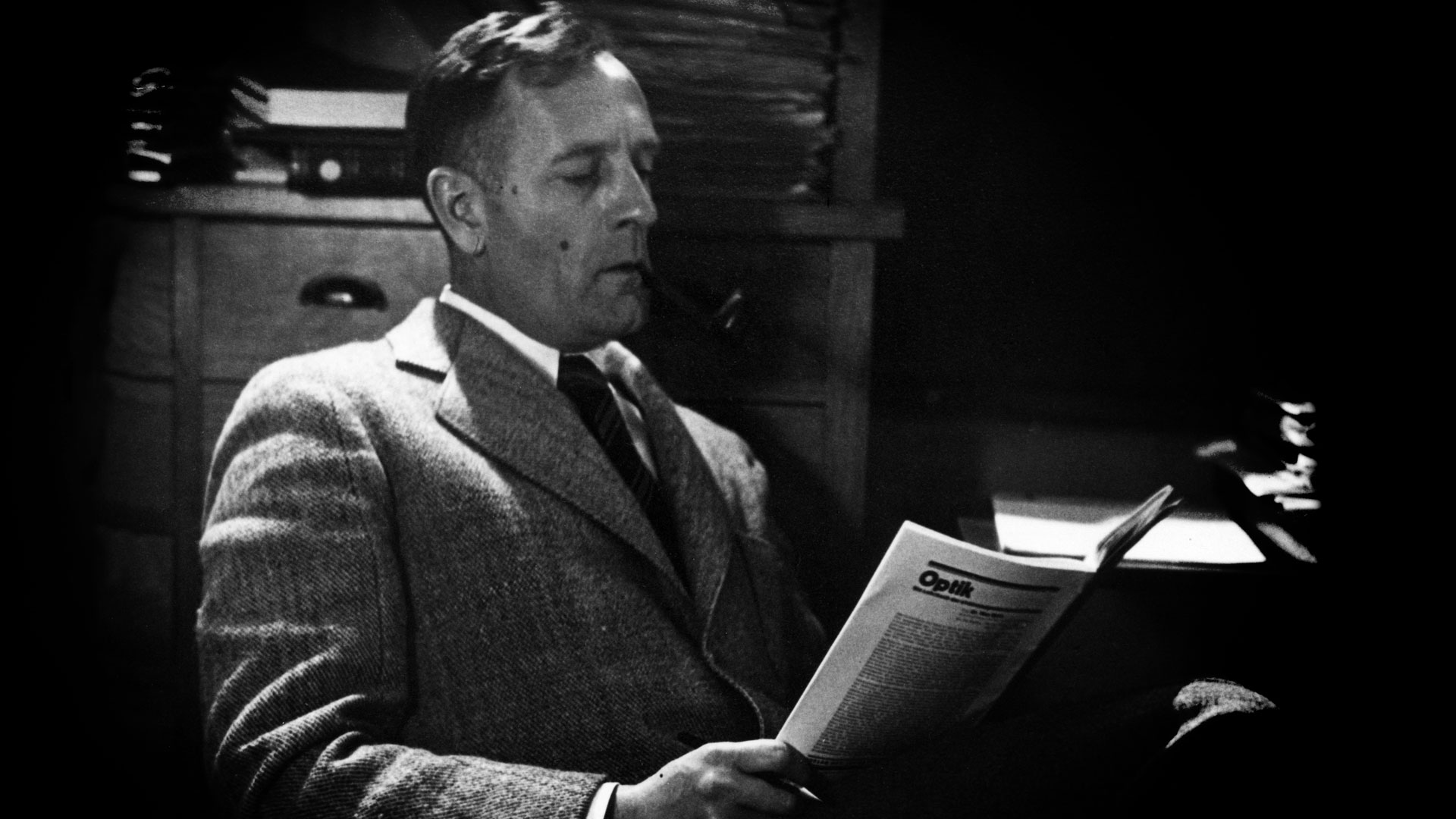 On New Year’s Day 1931 in Pasadena, California, many gathered to see who would win the annual Rose Bowl football game. Others came to decide the origin of the universe.

Among the latter was Albert Einstein. During the first decades of the 20th century, even the simplest concepts in astronomy were yet to be established: how big is the universe, and where did it come from? Einstein wanted to examine Edwin Hubble’s contribution to the answer.

Hubble, an astronomer at Pasadena’s Mt. Wilson Observatory, had already answered the first key question: there was much more to the universe than the Milky Way. But did the universe have a beginning? In 1917 Einstein had refined his general theory of relativity based on the assumption that the universe was constant and unchanging, with neither beginning nor end. Although his calculations originally indicated the necessity of expansion, Einstein fudged in a “cosmological constant” to counter it.

After their January meeting, Hubble became known as the man who made the smartest man in the world change his mind about the structure of the universe. Einstein’s subsequent reconfiguring of what he called his “biggest blunder” brought Hubble’s astronomical observations of a mysterious “expanding universe” into the mainstream of scientific and public acceptability.

Born in 1889 to John Powell Hubble and Virginia Lee James, Edwin was the third of eight children. The growing family moved often but eventually settled in Edwin’s birthplace of Marshfield, Missouri.

A precocious youth, he completed high school at 16 and received a scholarship to the University of Chicago. There he took his first courses in astronomy and excelled in sport. His height and build lent themselves to success in basketball and track. Naturally competitive, his ultimate prize at the time was a Rhodes scholarship in 1910.

Although from a family of deep Southern roots, Hubble began to reinvent himself upon arrival at Oxford University. Incorporating quirky habits of dress and manner—plus fours, cardigan, hat, pipe, and anglicisms of speech—he discarded his past for a new persona.

The transformed Hubble graduated from Oxford in 1912 with a law degree and returned to Louisville, Kentucky. He rejoined his family and for a year taught secondary-school physics and Spanish, and coached the basketball team to the state tournament. It is disputed whether he ever passed the bar exam.

In 1914 he finally turned his full attention to studying the heavens and gained a position at Yerkes Observatory in Wisconsin. After spending the summer reading several basic books on the history of astronomy and stellar measurement, he joined the American Astronomical Society. He finished a jumbled doctoral thesis before going overseas to serve in the army during World War I. His brief wartime service led to a further refinement of his persona: he now added a military twist to his attire with high boots and a cane, and assumed the moniker “the Major.”

Following his service, Hubble accepted an opportunity for further study at Cambridge. In 1919, completely adorned in the regalia of “the Major,” he returned to the United States and went directly to Pasadena. There the aspiring astronomer joined one of the founders of modern astrophysics, George Hale, and his team at the just completed 100-inch reflector telescope on Mt. Wilson. Milton “Milt” Humason, who had arrived at the observatory in 1917 as a janitor, is credited with introducing Hubble to the world’s most powerful telescope in October. The iconoclastic pair became close collaborators for the next 34 years. It was Humason’s skill in creating the spectrographic plates and their redshifts that enabled Hubble to make his calculations.

Hubble’s marriage in 1924 to Grace Burke-Lieb, the recently widowed daughter of a well-connected Southern California millionaire, was the culmination of the personal transformation he had begun 14 years earlier at Oxford. Throughout their nearly 30 years of marriage, Grace recorded in her diary her husband’s remarkable story, not with the eye of an observer but with that of an admirer. Together they would parlay his image, charisma, and legitimate scientific celebrity into an active Hollywood and international social calendar.

By 1925 Hubble and Humason had settled one of astronomy’s primary problems: Is the Milky Way the whole universe? Using a certain class of stars with known brightness, a kind of “standard candle,” Hubble worked out the distance to several gas clouds, or nebulae. Though these had been believed to be a part of the Milky Way, Hubble’s distance measurements established them as part of our Local Group of galaxies—the first of what we now know are millions of independent galaxies, each (like the Milky Way) composed of multiple tens of thousands of stars.

For the next few years, Hubble would use Humason’s redshift data to determine the distances to these “island universes,” the galaxies beyond the Milky Way.

Hubble’s name appeared alone on the landmark 1929 paper, “A Relation Between Distance and Radial Velocity Among Extra-Galactic Nebulae.” In it he presented a correlation of speed and distance for a selection of galaxies. The paper demonstrated a remarkable correspondence between galaxy distance and speed: the farther the faster. The relationship meant that one could create a look-back time to imagine when all of the galaxies exploded outward from a single point of origin, a beginning to the universe.

Hubble was cautious regarding the finding, noting that “the present discussion is a first approximation representing a restricted range in distance” and that new data “may modify the significance of the present investigation.”

Such scientific hedging did little to dampen either the media’s or the astronomical establishment’s enthusiasm for the concept of an expanding universe, the ultimate Genesis event. But for a man who seemed in all other ways to enjoy being the center of attention, Hubble remained uncharacteristically reserved. While he acknowledged the concept of the expanding universe, he never held up his work as proof, as others did. And although from this time forward he would be associated with discovering the origin of the universe, he never made such a claim himself.

“The velocity-distance relation is considered as the observational basis for the theories of an expanding universe. Such theories are widely current,” he wrote. “Because the telescopic resources are not yet exhausted, judgment may be suspended until it is known from observations whether or not red-shifts do actually represent motion.”

The relationship between motion and distance soon became known as the Hubble Constant. With it came the birth of modern cosmology—the science of both the history and the fate of the universe.

In 1949, just as the new 200-inch Hale telescope was coming into use about a hundred miles from Pasadena at Mt. Palomar, Hubble suffered a heart attack while vacationing in Colorado, and then another in the hospital. Although he survived, his ability to work at the mountaintop observatories was curtailed for more than a year.

During this time the direction of the science was turning from strictly observational to an increasingly theory-driven enterprise. Hubble always insisted that he was “primarily an observer” with an emphasis on “the positive knowledge that has been assembled.” He added, “I am not worried about theory.”

Not only was the emphasis of the science changing, Hubble was also disturbed by the increasing nonchalance of staff and visiting astronomers for the social protocol of the mountain he so enjoyed. The man who continued to dress as if he were at Oxford and to sport a pipe (although no longer lit) was literally losing his place at the Mt. Wilson table. Just as Einstein’s influence had waned under his protests against quantum theory, so Hubble’s refusal to join in the debate over the meaning of his most important observations left him receding like one of his nebulae into the cosmological background.

By September 1953 he had completed his 176th exposure at Palomar. At the end of the run, he took his wife on a quiet tour of the huge dome and the photographic vault. “In two years I will have determined the red-shift [from the new observations],” Grace recorded him as saying. Her diary entry continued, “But the big cosmological program I shall not live to see.”

The Hubbles returned to Pasadena, anxious for the next trip to the “Big Eye.” That trip never came. While walking home from his office for lunch a few days later, Hubble suffered a cerebral thrombosis and died quietly at home. Grace had his body cremated; there was no formal service or memorial. She boxed and buried his ashes in a still undisclosed place. Today a small historical marker, set in a front-yard planter, notes his former residence.

To Seek the Unexpected

Meanwhile, orbiting high overhead, Hubble’s namesake telescope keeps a watchful eye on the cosmos. Since 1993, the Hubble Space Telescope (HST) has electronically imaged light from the depths of space. Extending our view of the vastness of the universe, the HST has given us access to places beyond what Hubble termed the “preliminary reconnaissance” of our celestial shore.

“From our home on Earth, we look out into the distances and strive to imagine the sort of world into which we are born.”

“We are, by definition, in the very center of the observable region,” the astronomer noted in his popular work The Realm of the Nebulae. “We know our immediate neighborhood rather intimately. With increasing distance, our knowledge fades, and fades rapidly. Eventually, we reach the dim boundary—the utmost limits of our telescopes. There, we measure shadows, and we search among ghostly errors of measurement for landmarks that are scarcely more substantial.”

The Deep Field image of “empty” space is one remarkable example of both the power of the instrument and the tenacity of the human spirit in its quest for understanding. Revealing an unimagined abundance of galaxies, the image is just one of tens of thousands that have brought us new surprises. But, as Hubble said in one of his last public talks, our “march outward” into the universe is never finished. “The urge is older than history. It is not satisfied and it will not be suppressed.”

From its vantage 353 miles above the earth’s atmosphere, the HST is a tool feeding that urge. New, more powerful space telescopes are being planned. Yet, even if he could focus his intent eye on their images, Edwin Hubble would likely remark with the same characteristic caution with which he proffered his own work. When asked the significance of his first Palomar images in 1949, he noted that they “looked about as we expected, and the scanty data could be forced into any of the current theories of the universe.”

He also remarked on that occasion that “definite conclusions on these questions must await long and very precise investigations of many samples of the sky.” Today he would probably say that even with 21st-century tools, the astronomer’s work is far from finished.

Assigning to Hubble the legacy of the expanding universe may be convenient and well established. Doing so, however, obscures his more important contribution. Hubble understood that appearances are often misleading and that there is a need for skepticism, for allowing evidence to accumulate over the long term before arriving at conclusions.

He knew this not simply because he was a scientist but because he knew himself and how he had fabricated his own image. From his incorporation of certain mannerisms, aloofness and dress in order to create an English sophisticate out of a country boy, he intuitively knew from the inside out that surface appearance reveals the true nature of neither the man nor the universe.