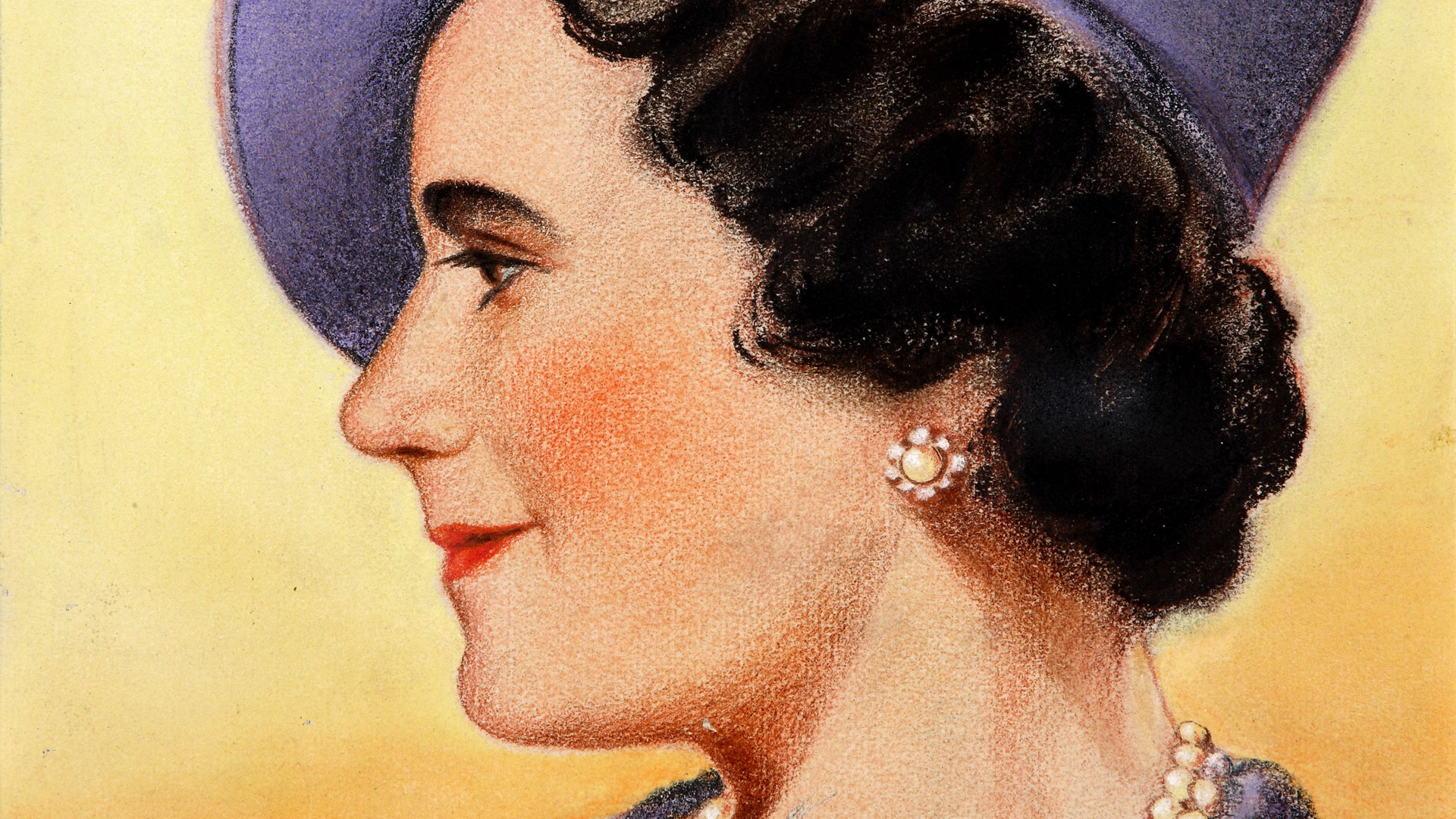 With a lifetime spanning more than a century, from Queen Victoria’s reign to the present, Britain’s Queen Mother has become a unique national treasure.

A degree of mystery surrounds the birth of Elizabeth Bowes-Lyon. She was born on August 4, 1900, the ninth of ten children of Claude Bowes-Lyon and Cecilia Cavendish-Bentinck, but her father neglected or forgot to register her birth for six weeks. Officially the site of her birth is listed as the family home in St. Paul’s Walden Bury, in Hertfordshire, although it is now accepted that it more likely occurred somewhere in London. One story has it that she was born in the back seat of a horse-drawn ambulance.

When Elizabeth was four, her grandfather died and her parents became Lord and Lady Strathmore. Her childhood was spent at St. Paul’s and at Glamis Castle, the family home in Scotland, where Lady Elizabeth was educated primarily by her mother and a succession of governesses. At the beginning of World War I (by coincidence Elizabeth’s 14th birthday), Glamis Castle became a hospital. Taking seriously her mother’s motto, “Duty is the rent you pay for your life,” Lady Elizabeth spent many hours tending to wounded soldiers. This experience contributed to her ability to relate to people of all backgrounds and social classes—a quality that has endeared her to the British people.

After the war, Elizabeth was introduced into royal circles and was relentlessly pursued by numerous suitors. She became reacquainted with Prince Albert, the Duke of York—second son of King George V and Queen Mary— she had first met when she was five. Prince Albert, a shy man with a stammer, fell in love with her immediately and determined to marry her despite her reluctance to take on the trappings of royal life. From an early age, her father had warned her to avoid entanglements with royalty at all costs. Elizabeth is believed to have accepted the Duke only after his third proposal.

The couple married on April 26, 1923, in Westminster Abbey. On her way to the altar, Elizabeth laid her bouquet on the Tomb of the Unknown Warrior, an act that won the hearts of the British public. Historian David Starkey comments that, in a complete break from the past, the wedding represented a royal romance rather than an alliance among European royal families. A film of the festivities was later shown throughout the country, but a live radio broadcast of the actual service was forbidden. Church officials feared that “disrespectful people wearing hats might listen in public houses.”

The Duke and Duchess of York had very few public duties, and the next 14 years were relatively quiet. During this time Elizabeth helped “Bertie,” as the Duke was affectionately called, to overcome his stutter with the aid of a speech therapist. Their first daughter, Princess Elizabeth, was born in 1926. Four years later the couple welcomed a second daughter, Princess Margaret.

In 1936 the nation mourned the death of King George V and was shocked when Edward VIII soon abdicated the throne to marry the divorced Wallis Simpson. His younger brother Bertie was thus crowned King George VI in Westminster Abbey on May 12, 1937. It is widely accepted that the new queen, whose own sense of duty was so strong, never forgave her brother-in-law nor Mrs. Simpson. However, even though she had never wanted to be queen, Elizabeth determined to support her husband in the new pressures thrust upon him as king.

It wasn’t long before Britain became embroiled in another war with Germany. The queen’s efforts during this time did much to restore respect for the monarchy. She was strongly advised to take her young daughters to Canada, but she refused to go. The queen reportedly said: “The princesses cannot go without me. I cannot go without the king. And the king will never leave.” Instead the girls were sent to Windsor Castle, and the king and queen remained at Buckingham Palace where, practicing daily in the palace gardens, she learned to shoot a revolver.

The queen’s calls for unity were so successful that Adolf Hitler called her “the most dangerous woman in Europe.”

When Buckingham Palace was bombed during the Blitz, the royal couple escaped death by a 30-yard margin. Surveying the damage, the queen met the challenge head-on, saying, “I’m almost glad we’ve been bombed. Now we can look [London’s] East End in the face.” Determined to do her duty and convey optimism, the queen visited bombsites day after day, offering comfort and encouragement. Her warmth and charm were captured in newsreels as she visited hospitals and slums, and her calls for unity were so successful that Adolf Hitler called her “the most dangerous woman in Europe.”

In 1947, shortly after the war ended, Princess Elizabeth married Philip Mountbatten. The next year, the princess gave birth to the king and queen’s first grandchild, Prince Charles.

During this time the king’s health began to deteriorate, and he died on February 6, 1952. Though at first he had been a reluctant monarch, King George VI became an immensely popular one: more than 300,000 people paid their respects at Westminster Hall.

The queen retreated to Scotland and wore black for a year following the king’s death. Winston Churchill is credited with persuading her to return to public life, at which time she took up residence at Clarence House near Buckingham Palace. As Elizabeth II began her reign, her mother began a new career as beloved Queen Mother, national grandmother and roving ambassador. In 1958 a Canadian reporter affectionately referred to her as the “Queen Mum,” and the nickname stuck.

The Queen Mother is patron or president of more than 300 organizations. Throughout her widowhood she has maintained a busy schedule, making in excess of 100 public appearances the year she turned 90. However, due to poor health, she has not appeared in public in recent months.

On February 9 this year, Princess Margaret died as a result of a stroke. A few days later the Queen Mother fell while alone in her sitting room and suffered cuts and shock. Yet, despite her fall and a virus she has been battling for several months, she attended her daughter’s funeral on February 15—50 years to the day after the funeral of her husband, George VI.

Today the Queen Mother, at the age of 101, is a much loved and respected member of the royal family. Perhaps more than any other, she has established the House of Windsor in the hearts and minds of the British public. Having done more than her duty, the Queen Mum clearly cares about people. And they most definitely care about her.