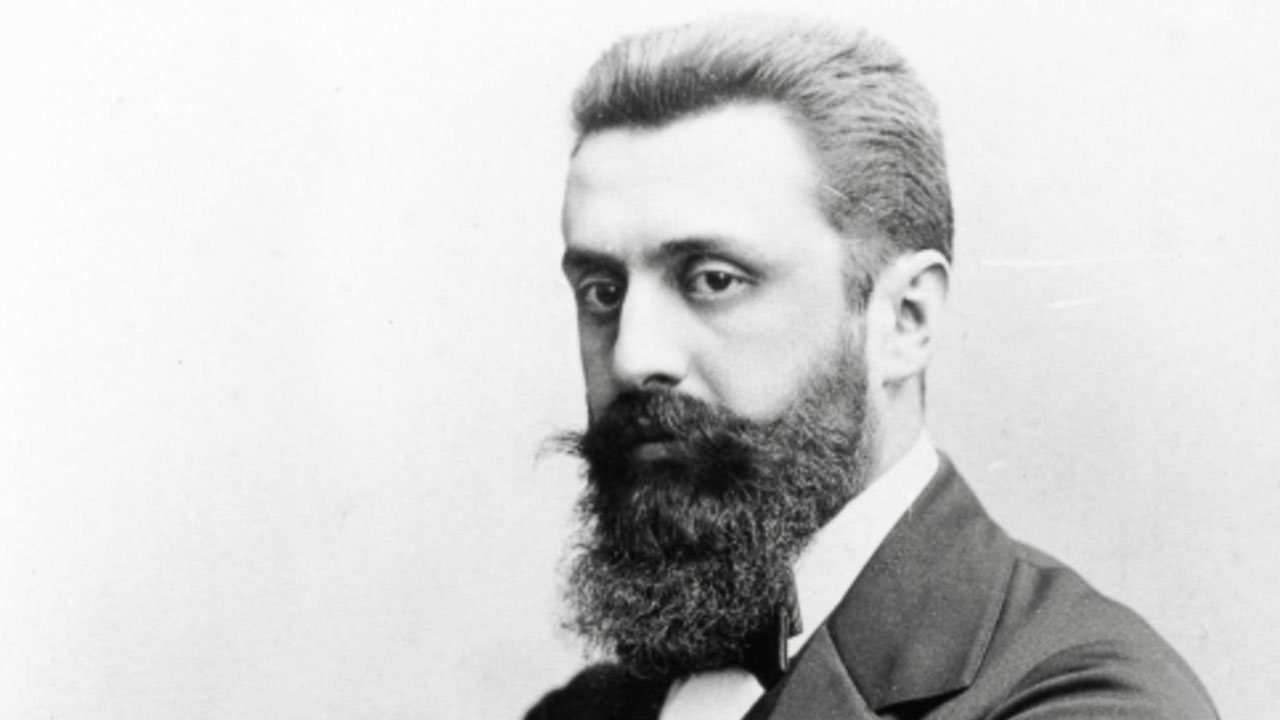 Theodor Herzl (1860–1904) was born in Pest, Hungary, into a wealthy conservative Jewish family. He attended Jewish elementary school and public high school. Following the death of his only sister in 1878, he and his parents moved to Vienna, where he entered law school. In 1882 he became engaged in protest after he read an anti-Semitic work, and in 1883 he resigned from a student society over its anti-Semitic attitude. Although he qualified as a lawyer the following year, he soon took up writing as a profession. After some success as an author of short stories, he became the Paris correspondent of a liberal Viennese daily, writing about French life. Anti-Semitism soon became a theme again, and Herzl proposed answers to the Jewish Question in terms of assimilation, religious conversion and socialism.

But in 1894 he rejected these solutions, having come face-to-face with French anti-Semitism in the celebrated Dreyfus Affair surrounding an assimilated Jewish military officer who had been falsely accused of treason. Herzl’s experience of attending the trial as a journalist confirmed for him the belief and experience of many Jews that it did not matter how assimilated or how loyal to their adopted nations they were; they would always be undervalued and persecuted. This was the turning point for Herzl. He concluded that the only solution to the Jewish Question was emigration to a land set apart as a Jewish enclave.

In 1896 he published The Jewish State (Der Judenstaat), the basis for his reputation as the father of political Zionism. Herzl’s solution was a national home for the Jews achieved by diplomacy among “the civilized nations of the world in council.” Interestingly, despite his willingness to consider several possibilities besides Palestine, he wrote, “All through the long night of their history the Jews have not ceased to dream this royal dream: ‘Next year in Jerusalem!’ is our age-old watchword. Now it is a matter of showing that the dream can be transformed into an idea that is as clear as day.”

Convening the first Zionist Congress in 1897 (soon known as the World Zionist Organization, though not officially named so until 1960) in Basel, Switzerland, Herzl persuaded the delegates to accept his formulation. Historian Avi Shlaim reminds us of his words on that occasion: “The aim of Zionism is to create for the Jewish people a home in Palestine secured by public law.” Confirming his commitment to more than a national home, however, Herzl wrote in his diary, “At Basel I founded the Jewish State.” He was to preside over the World Zionist Organization until his death.