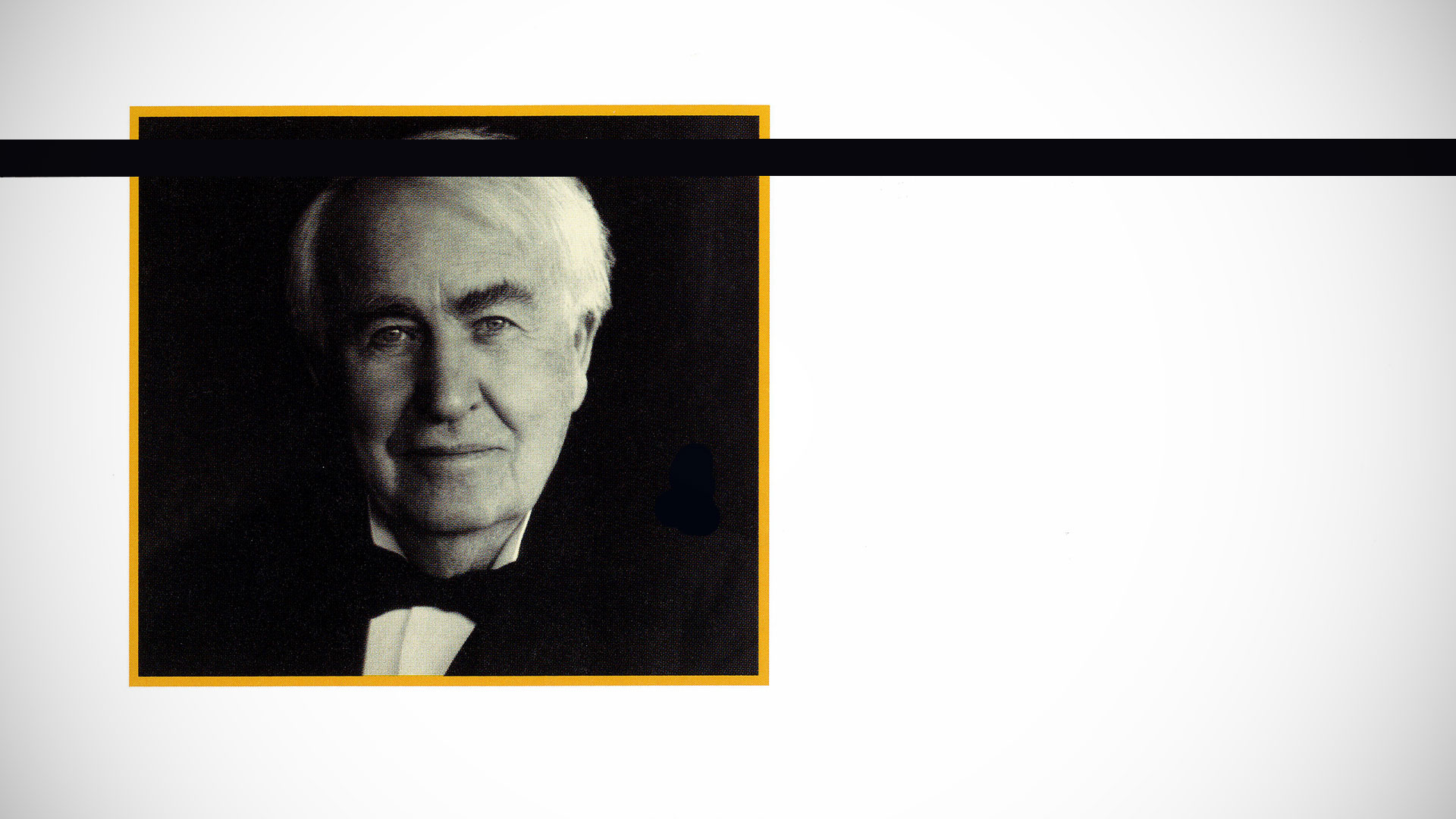 October 18, 2001, marks the 70th anniversary of the death of a man whose life has immeasurably affected our own lives. Many of the products and industries that our socio-economic systems depend on today had roots in the fertile imagination of Thomas Alva Edison (1847–1931).

The renowned inventor, businessman and salesman learned early from his father, Samuel Edison, an enthusiastic entrepreneur, how to work with people and turn his efforts into profit. His mother, too, played a critical role in shaping his keen mind: when Nancy Edison, a teacher, was told that her energetic son was “addled” and couldn’t learn, she pulled him from school to undertake his education herself.

As a young teen in Port Huron, Michigan, Edison bought a portable printing press and convinced a local train conductor to let him set it up in an unused portion of a baggage car. Selling advertising to cover his costs, the boy peddled copies of his weekly paper on the train’s daily round-trip to Detroit. He used the income to buy chemicals from local pharmacies to stock his science lab, first in his basement, then in the baggage car—until an accident forced an end to that.

While the train was on layover at Detroit each day, Edison would visit the public library, where he set out to read every book, shelf by shelf. He continued throughout his life to read on a variety of subjects: science, manufacturing, arts, music, law, metaphysics, politics and more. The writings of English-born philosopher Thomas Paine in particular influenced his outlook on life.

At 15, the quick-witted youth pulled a child from in front of a train. In gratitude, the child’s father rewarded him with an opportunity to learn telegraphy. The always eager Edison took him up on his offer. When the Civil War broke out, he put his various skills to good use: first he sold newspapers and then he worked as a traveling telegraph operator.

After the war, he went to New York City to make a life for himself. Penniless, he had to make do with sleeping in the corner of a basement office on Wall Street. When a ticker tape machine broke down after a day of heavy trading, Edison was called in to repair it. In the process, he spotted ways to improve on the technology and soon was developing a more reliable machine that put all the receiving tickers in unison with a central sending apparatus: the Universal Stock Ticker. When he was asked about its price, Edison hesitated, then suggested, “Make me an offer.” The $40,000 he received was the stake he needed to build his own “invention factory” in Menlo Park, New Jersey.

Edison assembled an enthusiastic team of young scientists and laboratory assistants from around the world, as well as skilled mechanics, machinists, draftsmen and patent attorneys. He led his team with humor and zeal, though he took personal credit for the products they developed and applied for the patents in his own name.

A shrewd businessman, he examined any research that was underway before beginning on a new project. Actually, many of the 1,093 U.S. patents and at least 1,239 foreign patents he received were for improvements to other people’s ideas. Part of his genius was to take the inventions of others and turn them into useful products; the light bulb is a notable example. Another factor no doubt also contributed to his success: When others proclaimed a project had failed, Edison would not accept defeat, contending that his focus had merely been sharpened and redirected.

Though he enjoyed showing off his lab to visitors and was generally even-tempered, he had no tolerance for interruptions when he was engaged in an experiment. Hating to waste time he might have used for work or reading, he permitted himself only four hours of sleep a night plus occasional short naps. When a critical experiment was underway, he would go for two or more days without sleep. He even refused to leave his experiments for the time it would have taken to accept an honorary degree. It was Edison who proclaimed that “genius is one percent inspiration and 99 percent perspiration.”

The famous inventor’s one physical handicap was his hearing. According to some sources, when he was 12 and boarding a train, the conductor grabbed him by the ears to help him up. He reported hearing a loud pop in his head, and from that point his hearing was permanently damaged. Demonstrating his optimistic attitude, however, he insisted that it helped his concentration by keeping distractions and stress from noise at a minimum.

In 1871, Edison married Mary Stillwell, a shy young lab assistant. When Mary died in 1884, she left Edison to raise a lively daughter and two young sons.

Two years later he proposed to Mina Miller by tapping the question into her hand in Morse code, which he had taught her. Mina had often stood beside him and tapped messages into his hand during interviews, dinners and honor ceremonies. With Mina, he had another daughter and two more sons.

Though he couldn’t reconcile his thinking with traditional religious perspectives, Edison expressed belief in a supreme Intelligence quite clearly. He is quoted as stating, “After years of watching the processes of nature, I can no more doubt the existence of an Intelligence that is running things than I do the existence of myself” (Frank Lewis Dyer and Thomas Commerford Martin, Edison: His Life and Inventions, 1929).

He went on to say that all the proof of that Intelligence he needed could be summed up in the unique properties of ice, the only crystalline substance that doesn’t sink in water. “And it is rather lucky for us mortals, for if it had done so, we would all be dead. Why? Simply because if ice sank to the bottoms of rivers, lakes, and oceans as fast as it froze, those places would be frozen up and there would be no water left. That is only one example out of thousands that to me prove beyond the possibility of a doubt that some vast Intelligence is governing this and other planets.”