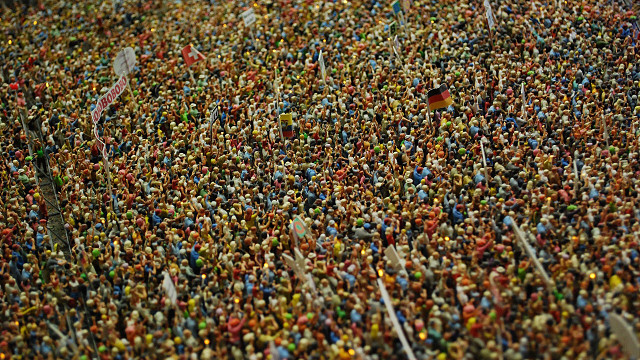 For most of our tenure on the planet, the human impact on the synergy of air, water, soil, energy and life that make the earth habitable has been small. But as our technology, industry and numbers have increased, that impact has also increased. The increase has been exponential in terms of our population as well as our influence on the natural systems that create a life-sustaining environment. In some ways humankind has become the ultimate invasive species. To be equated with some sort of fuzzy-clawed crab or other gravid invertebrate seems rather an insult. But we seem to be just as oblivious to the world around.

To many observers, we seem to be a species wheeling out of control; apparently senseless to the consequences of our actions in the world and with little means of control either of ourselves or of anyone or anything else.

Thus as the United Nations pegs October 31, 2011, as the date when human population passes 7 billion, we can expect increasingly strident calls for a deep evaluation of our planetary role. The UN’s 7 Billion Actions website suggests that “individual actions are needed—to think, live and engage one another differently, and to manage this growth responsibly. Our increasing global population will affect us all and it is everyone’s business to do something about it.”

EVEN MORE IN THE PIPELINE

But what does “live and engage one another differently” mean? Commentators may simply focus on the fact that no one really knows when number 7,000,000,000 will come off the line. And while it is correct that the actual date cannot really be known, the greater symbolism of the moment is what the UN is seeking to capture: at a time of global economic and political turmoil, there are ever more of us that need food, water and space. To act “differently” will mean in essence that everyone, and especially those of the First World, will need a more global perspective.

If we are to create a sustainable global community, there must be, for instance, more equitable use of resources. Just as we have seen global economies become destabilized through “every man for himself” corporate and financial strategies, the same type of ecological abuses will surely lead to a day of reckoning as well. Unfortunately, the biosphere of the planet does not so easily forgive its debts. The way forward is to accept and operate from the principle that we are our brother’s keeper, and there are ever more brothers on the way.

Ehrlich has been discussing these questions for more than 40 years. Beginning in 1968 with The Population Bomb, Ehrlich predicted a dire future for the burgeoning human numbers. He admits he was wrong concerning the timing of the massive famines and ecological unraveling he foresaw. While human civilization has always faced food shortages and resource bottlenecks from time to time, Ehrlich believes our modern equivalents are not so easily hurdled.

Many ecologists have come to the conclusion that we are “ecosystem engineers.” Writing in The Dominant Animal, Paul and Anne Ehrlich, for example, note that human influence is so pervasive that we have altered the paths of all life. They write that “a burgeoning human population, perpetually trying to increase its consumption, is now reshaping the entire Earth to suit its own immediate needs—to be its niche.”

While the green revolution in farming, and increases in dam building, aquifer drilling, fishing fleet industrialization and fossil fuel consumption, abated the detonation of Ehrlich’s 1970s population-meltdown bomb, these efforts did not defuse the bomb. In fact, many of the technological fixes have been faux saviors; while they seemed to advance the status quo for a time, they ultimately may have offered only borrowed time—time that might have been used to better our ends. Instead, it seems to have been time lost. According to Ehrlich, these natural-capital-consuming practices have merely put more people and the planet itself in greater peril. “We are in the middle of a large scale disaster right now. Globalization has given us the privilege of perhaps having the entire civilization go under.”

A SENSE OF LIMITS

Lynton Caldwell (1913-2006) was one of the first political scientists to recognize the connection between human activities and the threat that we would create for ourselves. A designer of the National Environmental Policy Act of 1969, Caldwell understood that growth and consumption were not without limits. “Without a strong and governing principle of limits built into public policy, the ingenuity of humans may impel them toward their own demise.”

In a 1998 article “Is Human Destiny to Self-Destruct,” Caldwell was spot on. “Limits hold true for all life-forms and will ultimately constrain the direction of human development. If the present widespread commitment to a sustainable future is realistic, people and policy makers must act upon the axiom that unfettered growth and unrestrained expansion in a finite system leads toward a condition of cul-de-sac which, if irreversible, could result in destruction.” Of all the threats to humanity, proposes Caldwell, the greatest are arguably war and civil disorder. “One need not minimize their dangers to also recognize that attrition of the Earth’s biosphere and life support systems could continue unobtrusively under conditions of peace until a point at which environmental disintegration led to societal disintegration.”

In a section relevant to the October 31, 2011, milestone, Caldwell focused on population. It is noteworthy that at the time he wrote the earth housed only 6 billion people. “Today there is one human force that is driving the expansive course of the material economy and stressing all parameters of the natural environment. It may be the most significant factor in the prospect of societal self-destruction. This is the unprecedented and presently irreversible explosive growth, dispersal, and concentration of human populations. There are few real environmental, economic, and social problems that would not ultimately be significantly eased if world populations were stabilized below present and projected levels.” Pointing out the complexity of the combined forces of population, resources, environment, and the economy, He adds that “generalizations risk error; and yet the adverse ecological and sociological consequences of unrestrained population growth seem undeniable—albeit nevertheless widely denied. If society overshoots the limits of sustainability, retrenching to a stable state would likely be painful and disruptive. Whether democracy and individualism as we know them could survive a reverse transition is, at least, questionable.”

Concerns that current human populations are already too large to be sustained indefinitely by the earth’s resources can only increase along with the numbers. “Stabilizing populations at significantly reduced numbers would greatly improve the human prospect,” says Caldwell, “but this objective seems far from acceptable in today’s world. There would be pain in the transition—the benefits in the long-range future. The plausible expectation is that humanity will be unwilling or unable to attempt this transition until it is imposed by forces exceeding human volition or control. The possibility of disastrous consequences for humanity should not be discounted.”

THE WAR OF THE WORLDS

In the novelThe War of the Worlds, historian and writer H.G. Wells couched the imperialism of his day in the costume of invading aliens from Mars. Today, we drive our machines across the earth with similar abandon and little regard for our fellow man or for nature itself. It is an interesting parallel to the 1890s, only now we are much improved in our capacity to “engage the enemy” and take possession of what will be ours. Now we have the run of the planet. We don’t drive spindly-legged tripods with mysterious heat rays, but we do seem to be terraforming the planet in our own image; our vehicles and destructive potential probably even exceed Wells’s ample imagination.

Selecting October 31 as the seven-billion marker also has an interesting parallel with Orson Welles’s production of The War of the Worlds radio broadcast in 1938. As he noted at the end of the program—which many listeners believed to be an actual newscast of an extraterrestrial invasion—it was all in fun. “This is Orson Welles, ladies and gentlemen, out of character to assure you that The War of the Worlds has no further significance than as the holiday offering it was intended to be. The Mercury Theatre’s own radio version of dressing up in a sheet, jumping out of a bush and saying, Boo!”

Who would believe such an outlandish story, he commented later when told of the panic. Of course, in 1938 on the eve of World War II, Welles likely understood that he was playing with fire—that an uneasy audience might just be far enough over the edge to be taken in.

Today we are on the same kind of edge. In all three cases—Wells’s original writing, the Mercury radio version and the UN’s current use of this date—the public has been asked to consider the bigger picture and to take responsibility for being part of that picture. The world is at our door, and we are at the world’s door. Will it be a trick or a treat?

“Human beings have broken out of the circle of life, driven not by biological need, but by the social organization which they have devised to ‘conquer’ nature,” wrote ecologist Barry Commoner in The Closing Circle. “Anyone who proposes to cure the environmental crisis undertakes thereby to change the course of history.”