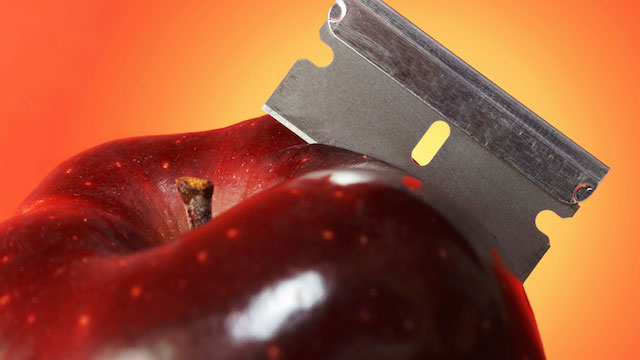 Increasingly in homes across the globe, an odd thing happens each October. Decorative spiderwebs, skeletons, witches on flying broomsticks, jack-o’-lanterns and other ghoulish paraphernalia begin to appear as Halloween comes around.

According to the National Retail Foundation, Americans spent an estimated $6.9 billion last year on the event, making it second only to Christmas as the country’s most commercialized celebration. Each year on the evening of October 31, children don costumes and masks and go “trick-or-treating.” People of all ages carve faces in pumpkins and attend Halloween parties, where fortune-telling, recounting stories about ghosts and witches, and bobbing for apples are common activities.

Today’s observance, however, had its beginnings in a much more ancient celebration hundreds of years before the first Europeans set foot in America. A closer look at the history of this strange annual ritual should raise some questions in the minds of any who ascribe to themselves Christian beliefs.

Halloween’s roots go back 2,000 years to the Celtic inhabitants of the British Isles. This ancient people held a fire festival called Samhain, or “summer’s end,” to celebrate their new year, which began on November 1. The festival lasted for three days and marked the beginning of the dark half of the year. It was believed that the boundaries between the world of the living and the world of the dead were weakened, and that spirits of the recently deceased could cross over and possess the living.

Like all Celtic festivals, Samhain was celebrated on three levels: material, inner and cosmic.

On the material level, the Celts took stock of their supplies for the coming winter and brought people and cattle in from the hills and glens to their winter quarters. To remain alone at this time of the year was to expose oneself to the perils of the chaotic “Otherworld.”

On the inner level, Samhain was the most magical time of the year: the day that did not exist. The barriers between the worlds faded and the forces of chaos invaded the realm of order. For the Celts, a warrior people, death was never far away and they were unafraid of it. They desired only to die with honor and to live in tribal memory so they could be honored at the great Fleadh nan Mairbh, or Feast of the Dead, which took place on Samhain Eve (October 31). The Celts believed that on this night the spirits of the dead and those yet unborn walked freely among the living, making people at one with the past, present and future. It was, as such, an opportunity to honor their forebears. At the same time, however, they feared other ghosts and spirits from the dark side that they believed roamed free on Samhain.

The cosmic level heralded the supremacy of night over day with the rising of Pleiades in the winter sky, and it marked the ageless battle between light and dark, life and death.

In the first century of the Christian era, the Romans conquered the territory of the Celts. Typically the Romans were lenient in allowing conquered peoples to retain their religious observances. In the case of the Celtic celebration of Samhain, they would have found a number of similarities with their own practices: they already had a festival, Feralia, at which they commemorated the passing of the dead. They also celebrated an autumn day in honor of Pomona, the Roman goddess of fruit trees whose symbol was an apple. Samhain incorporated a number of customs, divinations and rituals in which this autumn fruit was central. Among them were fortune-telling activities such as bobbing for apples and removing the skin from an apple in one long, unbroken peel.

“With conversion came a redefinition of the local religion and its calendrical celebrations, due in large part to a successful strategy of the Christian missionaries.”

The Roman Empire eventually dissolved, of course, and by the ninth century, Christianity had spread to the British Isles, but many Celtic customs survived. Jack Santino, professor of popular culture and a fellow of the American Folklore Society, notes: “With conversion came a redefinition of the local religion and its calendrical celebrations, due in large part to a successful strategy of the Christian missionaries. The Catholic church, when sending missionaries to convert native peoples, encouraged the redefinition of traditional customs into Christian terms and concepts. Thus, in A.D. 601 Pope Gregory I instructed his priests that if, for instance, a group of people worshipped a tree, rather than cut the tree down, leave it standing but consecrate it to Christ. Instruct the people to gather regularly at the same site, Gregory wrote, but explain to them that they were no longer worshipping the tree, but He for whom the tree was consecrated. In such a way the early church adapted and accommodated the traditional religious beliefs and practices of those it sought to convert. Many of the festivals and holidays we enjoy have resulted from this policy and were derived in some part from already existing festivals and celebrations. Halloween is no exception” (Halloween and Other Festivals of Death and Life, 1994).

Already the Roman Catholic Church had dedicated certain days to honor specific saints and martyrs, but eventually the number became so great that a separate day could no longer be assigned to each one. So the church appointed a common day for all, and the pagan Samhain celebrations provided an ideal basis for such a day.

Santino records: “The first of November was declared All Saints’ Day. . . . The celebration began on the sundown prior to 1 November. Many traditional beliefs and customs associated with Samhain, most notably that night was the time of the wandering dead, the practice of leaving offerings of food and drink to masked and costumed revelers, and the lighting of bonfires, continued to be practiced on 31 October, known as the Eve of All Saints, the Eve of All Hallows, or Hallow Even. It is the glossing of the name Hallow Even that has given us the name Hallowe’en.”

To draw more converts, the church’s practice needed to be closer to the original intent of Samhain.

About A.D. 900 the church realized that All Saints’ Day had not fully replaced pre-Christian customs, and that to draw more converts, the church’s practice needed to be closer to the original intent of Samhain. November 2 was thus appointed as All Souls' Day. As Santino points out, “this day is in recognition of the souls of all the faithful departed who had died during the previous year. It is obviously much closer in spirit to the Celtic Samhain than is All Saints’ Day.”

As settlers came to America from the British Isles, some brought their Halloween practices with them. However, because of the strict Protestant beliefs of many, especially in colonial New England, the festival did not become popular until the second half of the 19th century. At that time, large numbers of immigrants fleeing the Irish potato famine arrived and introduced their Halloween customs.

By the end of the 1800s, Halloween became a holiday associated with community and neighborly get-togethers, and parties for both children and adults became the most common way to celebrate the day. By the 1920s and 1930s, parades and townwide parties had become the norm.

After World War II the large number of children from the baby boom brought about the move of the celebrations from town civic centers to classrooms and private homes, where they could be more easily accommodated. Trick-or-treating was also revived and adapted, and Halloween became the popular and commercialized holiday observed today.

By the latter half of the 20th century, however, the festivities took on special significance for a little recognized but growing group. Now numbering into the hundreds of thousands, Neopagans often claim Halloween as the most important holy day of the year. Having carefully studied Celtic history to determine as closely as possible the rites and customs of the Druids (the Celtic priests and intelligentsia), modern-day pagans have rekindled the polytheistic religion of this ancient people. And they are fully aware that “Christian” celebrations such as Halloween are, in fact, thoroughly pagan festivals.

Isaac Bonewits, Neopagan author and retired archdruid, notes on his website: “The Christian Church was unable to get the people to stop celebrating this holiday, so they simply sprinkled a little holy water on it and gave it new names, as they did with other Paleopagan [or ancient pagan] holidays and customs. This was a form of calendrical imperialism.”

“The Christian Church was unable to get the people to stop celebrating this holiday, so they simply sprinkled a little holy water on it and gave it new names.”

He adds that when some people suggest that Halloween observance should be removed from schools “because it’s a ‘pagan holiday,’ they are perfectly correct. Of course, Valentine’s Day/Lupercalia, Easter/Eostre, and Christmas/Yule also have many Paleopagan elements associated with their dating and/or symbols. . . . So if we decide to rid the public schools of all holidays that have Pagan aspects to them, there won’t be many left for the kids to enjoy.”

Bonewits quotes Philip Carr-Gomm, also a Neopagan and author of The Elements of the Druid Tradition, regarding the evolution of Halloween: “With the coming of Christianity, this festival was turned into Hallowe’en (31 October), All Hallows (1 November), and All Souls Day (2 November). Here we can see most clearly the way in which Christianity built on the Pagan foundations it found rooted in these [British] isles. Not only does the purpose of the festival match with the earlier one, but even the unusual length of the festival is the same.”

As people today continue to observe Halloween—with its roots in ancient pagan rites and customs—on an even broader international level, the practice raises some provocative questions. What are we teaching our children? Why in 21st-century society do we celebrate customs based on the ancient glorification of evil spirits, witches, magic, ghosts, death, and a pantheon of pagan gods and goddesses?

Why do those who claim a Christian identity encourage, observe and foster such a celebration for themselves and/or their children? Isn’t Halloween observance exactly the sort of practice the apostle Paul was referring to when he encouraged the followers of Christ in his time to disassociate themselves from the dubious customs of their societies? Paul wrote to the Corinthian converts, “Do not be unequally yoked together with unbelievers. For what fellowship has righteousness with lawlessness? And what communion has light with darkness? And what accord has Christ with Belial? Or what part has a believer with an unbeliever? . . . ‘Come out from among them and be separate, says the Lord’” (2 Corinthians 6:14–17).

Paul’s words represent an unpopular and neglected aspect of the Christian message. Surely the rejection of this overtly pagan festival is but one example of how we are able to fulfill his admonition today.