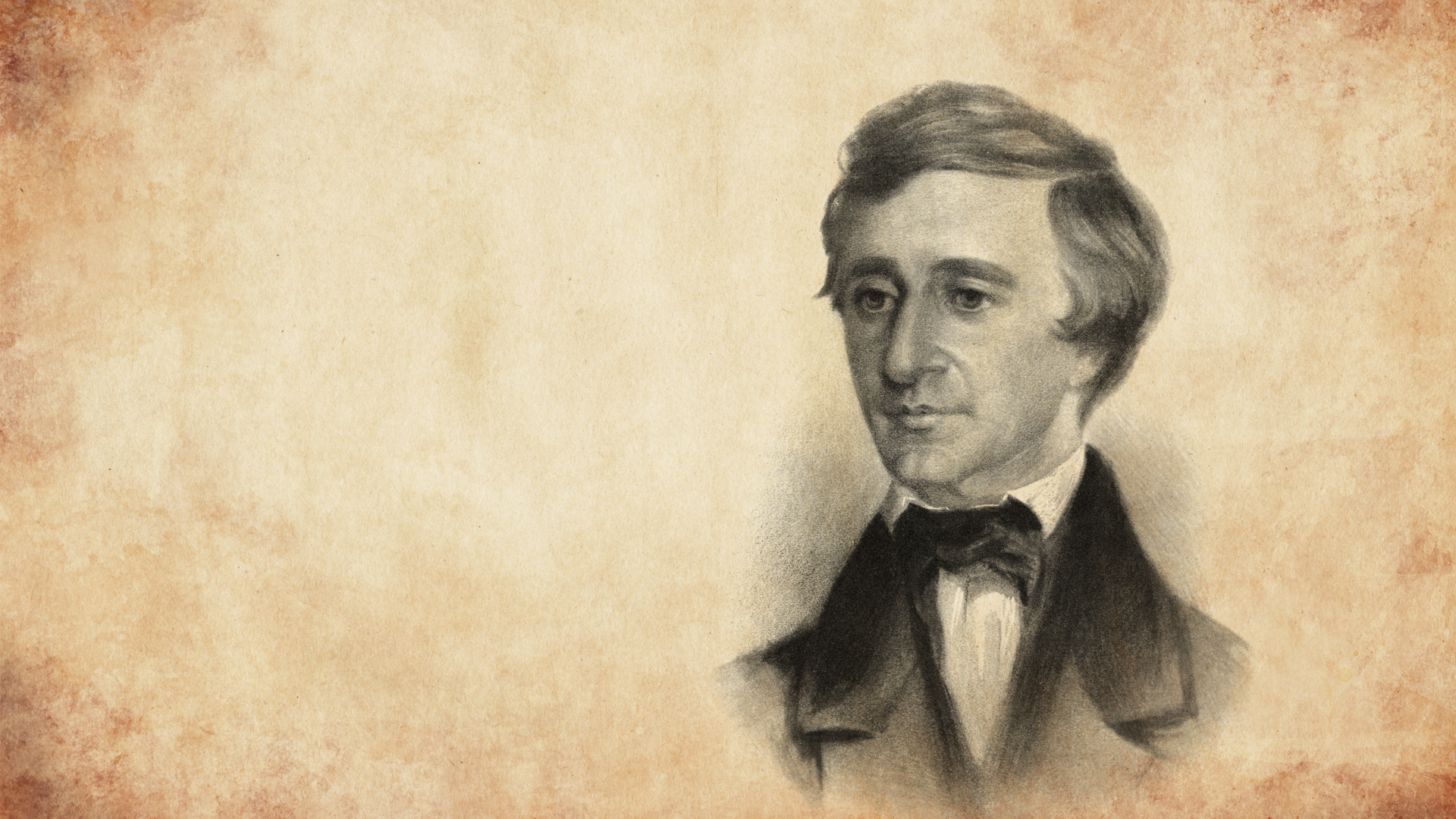 Though conservation is a popular topic these days, it is not a new idea. One of the first—and strongest—advocates of its importance was American essayist, naturalist and philosopher Henry David Thoreau. While living on the shore of Walden Pond, a mile and a half from the village of Concord and a mile from any neighbor, Thoreau had the foresight to see that America’s rapid population and commercial expansion endangered its inhabitants’ access to nature. His life’s work became a crusade to show his fellow citizens a different way of life, one that put aside materialism and embraced nature. “In Wildness is the preservation of the World,” he declared.

David Henry Thoreau (who later reversed the order of his first and middle names) was born in Concord, Massachusetts, in 1817. His father, John Thoreau, was a meek man who owned a pencil factory and enjoyed reading the classics. His mother, Cynthia, was a more vigorous person with a reputation for being an excellent housekeeper and cook. Extremely forthright in her views, she is described as a “born reformer” and was a founding member of the Women’s Anti-Slavery Society in Concord. In these traits, as well as in their shared interest in nature, can be traced the foundations of their famous son’s philosophy.

The opinions and interests that shaped Thoreau’s life and works were formed at a remarkably early age. His early poems speak of a love of nature, and his Harvard commencement address includes several themes that recur in all of his subsequent writings: that men should “lead . . . independent lives”; that riches should be “the means and not the end of existence”; that “this curious world which we inhabit . . . is more to be admired and enjoyed than used”; and that a person’s main work should be to “drink in the soft influences and sublime revelations of Nature.”

Returning to the family home in Concord after graduating from Harvard in 1837, Thoreau was introduced to Ralph Waldo Emerson. Emerson, who was to become a close friend and mentor, invited him to join an informal club of influential men and women. It was newspapers that first dubbed them “Transcendentalists,” reports biographer Walter Roy Harding. The term came from Kant and Hegel’s 18th-century theory that (in Harding’s words) “there was a body of knowledge innate within man and that this knowledge transcended the senses.” The July 1841 issue of the Transcendentalist magazine The Dial defined the philosophy as “the recognition in man of the capacity of knowing truth intuitively. . . . God is absolute truth; and man is created in his image.”

In Thoreau’s case, not only was he a Transcendentalist but what his friend and biographer Ellery Channing described as “a natural Stoic.” Robert D. Richardson Jr., author of Thoreau: A Life of the Mind, agrees. Explaining that “the essence of the Stoic way” is to turn “not to the State, not to God, and not to society, but to nature” as the “source of trustworthy moral principles,” Richardson claims that “Thoreau is probably the greatest spokesman of the last two hundred years for [this] view.” Indeed, Thoreau consistently held up Nature (with a capital N) as an example of virtue, in contrast to a weak and immoral society.

Thoreau’s philosophy was that each person should develop himself by studying nature and classic literature. Then, having thus connected to his own inner nature, he should “pursue his own way, and not his father’s or his mother’s or his neighbor’s instead.”

“Thoreau . . . believed firmly that reform always began with the individual.”

To Thoreau, pursuing one’s own way included not subordinating oneself to unjust laws, a view expressed in his 1849 essay “Resistance to Civil Government” (republished after his death as Civil Disobedience). Written in the context of slavery and what he saw as an unfair Mexican-American War, Thoreau’s argument is that when the government is producing injustice, it is the responsibility of conscientious citizens to resist it: “If the injustice [perpetrated by a law or government] . . . is of such a nature that it requires you to be the agent of injustice to another, then, I say, break the law.” Thoreau put his money where his mouth was. Famously, he spent a night in jail after refusing to pay a tax for a cause he didn’t support. He also helped slaves escape to Canada in defiance of the Fugitive Slave Law, which required even residents of free states to return fleeing slaves to their masters.

Interestingly, though Thoreau’s arguments in favor of civil disobedience are often referred to as an argument for nonviolence, soldiers and wars were a common metaphor in his writings. In his journal he wrote, “We do all stand in the front ranks of the battle every moment of our lives.” People often quote his most famous saying, “If a man does not keep pace with his companions, perhaps it is because he hears a different drummer,” without remembering that generally only soldiers march to drums. And in his 1854 lecture “Slavery in Massachusetts” he went so far as to say that, rather than obey laws that perpetuate slavery, “I need not say what match I would touch, what system endeavor to blow up.” Later he would defend John Brown’s violent actions at Harper’s Ferry. His interest was in advancing justice, as he defined it, by whatever means necessary.

A critic might suggest that Thoreau’s promotion of individually determined civil disobedience could lead to each citizen disobeying different laws in a rapid descent into anarchy. However, for all Thoreau’s talk about the importance of each man deciding his own way, he seems to have believed in a universal law and morality that would become apparent to anyone who took his advice to study nature.

It should be noted that this universal morality was not necessarily, to Thoreau, a Judeo-Christian one; he wrote that “to the virtuous man, the universe is the only sanctum sanctorum,” Latin for “the Holy of Holies,” the inner chamber of the ancient Jewish temple. In fact, Thoreau was much more inclined to express himself in pagan Greek terms, as when he claimed to have been “as sincere a worshipper of Aurora as the Greeks,” spoke of trees as “the shrines I visited both summer and winter,” or declared that “Jehovah . . . is more absolute and unapproachable, but hardly more divine, than Jove [aka Jupiter or Zeus]” because Jehovah “does not exert so intimate and genial an influence on nature.”

Conservation of nature went hand-in-hand with anti-commercialism in Thoreau’s mind. He spent two years living in the self-built one-room cabin on his friend Emerson’s land at Walden Pond, partly to write and immerse himself in nature, and partly as an experiment in living as simply as possible. He later excoriated “man’s improvements, so called,” which “simply deform the landscape.” And he did not hesitate to publicly criticize his neighbors, such as “the unclean and stupid farmer” who did not love or protect the pond on his property but “thought only of its money value; . . . who exhausted the land around it . . . and would have drained and sold it for the mud at its bottom.” Indeed, his idea that “the earth is . . . living poetry . . . a living earth; compared with whose great central life all animal and vegetable life is merely parasitic” has been called “the cornerstone of the modern conservation ethic.”

Thoreau died in 1862 at the age of 44, leaving several of his works unfinished. However, his ideas have inspired generations and, in some respects, shaped our world. His call to create “national preserves” of wild areas may well have influenced Theodore Roosevelt, who set aside over 230 million acres during his presidency and praised the “unique literary value” of Thoreau’s work. Both Mahatma Gandhi and Martin Luther King Jr. credited “Resistance to Civil Government” with defining their own groundbreaking 20th-century social movements.

But in this 21st century, perhaps Thoreau’s greatest legacy is a growing awareness that the natural world around us deserves a great deal more respect than we’ve become accustomed to showing it.