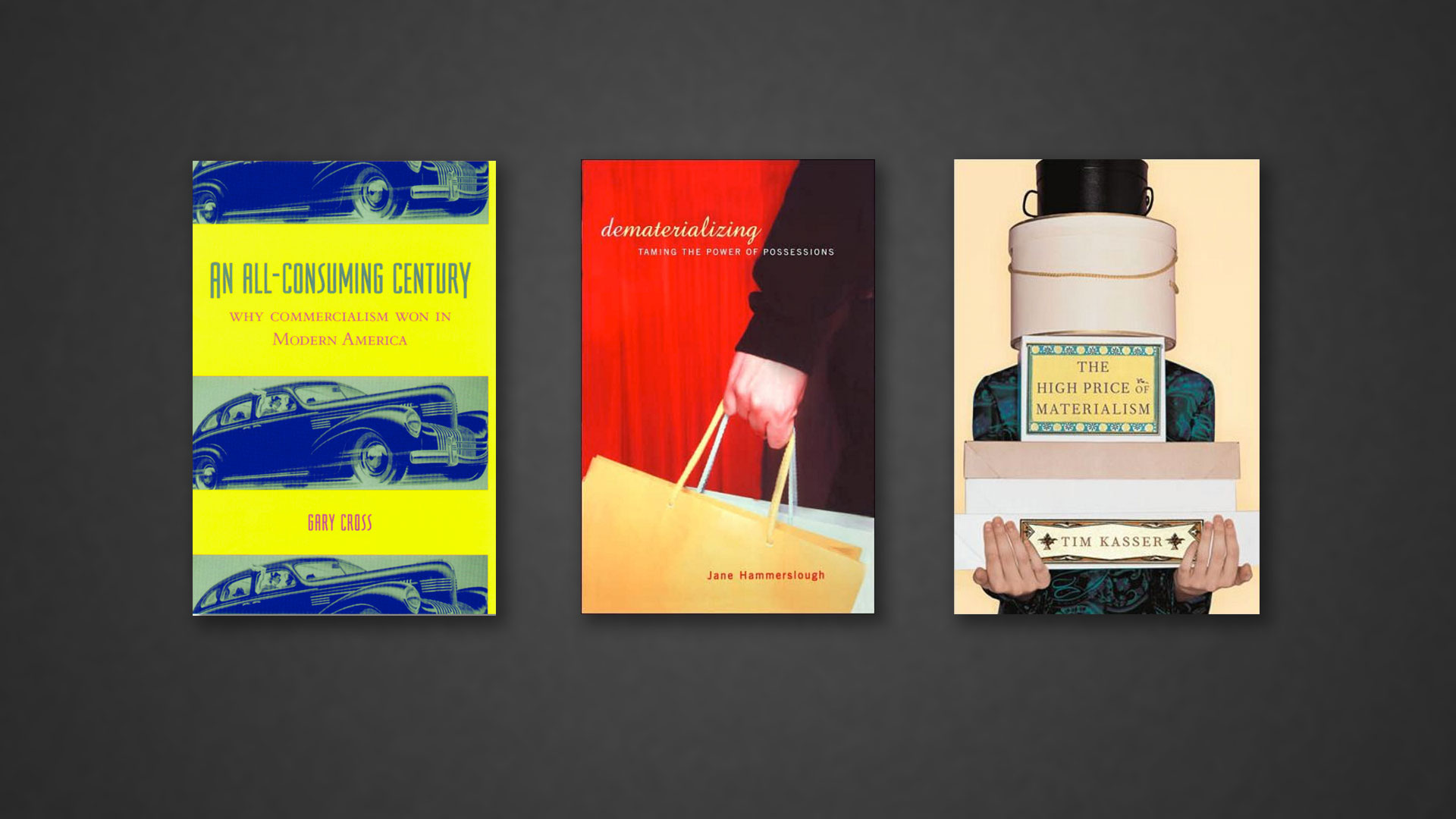 Seemingly by our own willingness, we are embedded in an ever expanding consumer-driven culture. The world economy, it seems, is based on the next sale. Accordingly, the consumer is increasingly persuaded to focus on materialistic pursuits, to acquire that next “want” that goes far beyond a genuine need for sustenance, safety and security.

Helping the process along, advertising bombards the consuming public daily. The promising slogans offer happiness and fulfillment if we will just buy a particular product. And many of us are surrendering unconditionally in this battle for our attention and our minds (not to mention our money)—choosing materialism over self-restraint.

This shift has been occurring for more than a century, according to Gary Cross. In An All-Consuming Century, Cross, professor of history at Penn State University, looks at the 20th century and concludes that the American identity has become defined by its relationship with consumer goods, both on the personal and the public level. Considering the various ideological “isms” that flourished over the years, he contends that “the real winner of the century was consumerism. Visions of a political community of stable, shared values and active citizenship have given way to a dynamic but seemingly passive society of consumption in America, and increasingly across the globe.”

Cross describes how, through the advent of mass production, the consumer society emerged to replace an economy that had been geared to mass subsistence and elite luxury: “The introduction of Henry Ford’s automobile assembly line in 1913 promised a dramatic new possibility—that industrial output could swamp demand for goods. . . . The ‘philosophy’ of consumerism was embedded in the words and images of the ad agency and display designer, who welded human physical needs, impulses, and fantasies to packaged goods.”

The word materialism may connote different things depending on the context in which it’s used. Yet at the heart of the word lies a common idea. Tobias Churton, in his book The Gnostics, puts it this way:

“In fact, materialism is much more fundamental a concept, and all the above are in a sense only symptoms or rather effects of it. Materialism means that the source of all things is matter and should we go back far enough to when matter was not, then there would be nothing, absolutely nothing—because there can be no thing without matter. . . .

“Our civilization may not actually believe in materialism but it certainly acts as if it did.”

While Cross gives a historical overview, associate professor of psychology Tim Kasser takes a scientific approach to the subject. In The High Price of Materialism Kasser investigates whether materialistic values really do produce happiness and well-being. He cites and agrees with studies showing that once people have met their basic needs for food, clothing and shelter, there is little benefit in accruing more. Using statistical studies, including his and cocreator Richard Ryan’s “Aspiration Index,” Kasser shows how those who place a high value on acquiring wealth and material goods aren’t as happy as their less materialistic counterparts.

In looking at the role possessions play in our lives, journalist Jane Hammerslough asks whether all these things really deliver the satisfaction and fulfillment the advertisers promise. Are we spending so much time on the pursuit of acquiring more and more that we are losing sight of what is really important?

In Dematerializing: Taming the Power of Possessions, Hammerslough suggests that we need to take a closer look at our lives. “Even if we don’t wholeheartedly embrace all those messages touting the power of possessions,” she notes, “we’re listening to them. Over the last three decades, per-capita consumption has risen 62 percent. In recent years, credit card debt has reached record highs, personal-saving rates have hit new lows, and more people declared personal bankruptcy [in the United States] than graduated from college. . . . One of the fastest-growing businesses today is in providing storage space for people’s excess stuff. We might not define a din of materialistic messages as ‘pressure tactics’ or even influential in our own spending habits. But clearly, something out there is sinking in for somebody.”

Americans once thought of the family home as somehow protected from the power of the merchandiser. But as the 20th century progressed, home and family became prime and profitable targets, while family relationships often became strained. “Affluence brought larger homes that never seemed large enough to contain their increasing contents,” says Cross. “Perhaps empty lives were being filled with full garages. . . . Americans found themselves in and through their personal stuff. . . . Youths found in spending a way of gaining autonomy and identity and of overcoming their insecurities. . . . There was no private retreat from the world of consumption.”

Part of the problem is that many people are working more hours to be able to afford what they have come to believe they and their children need, so family relationships are being shuffled to the sidelines. According to a 1997 PBS documentary, Affluenza, Americans spent an average of six hours shopping every week. Yet they could find only 40 minutes each week to play with their children. Another study indicated that working couples spent almost as little time talking to each other—about 12 minutes a day.

In the foreword to Kasser’s book, Richard Ryan of the University of Rochester notes that “not much time for living remains after the working, spending, and consuming are completed. Yet during this free time, children and adults occupy themselves with mass media bulging with advertisements that entice and promise good feelings ahead. . . . In this climate, almost everyone is vulnerable to ‘affluenza,’ an infectious disease in which one becomes addicted to having.”

The more often individuals succumb to this so-called affluenza, the more unrealistic they become about wealth and possessions.

What fuels this materialistic approach to life?

One answer is that people learn it from the environment they live in. Kasser’s research reveals that some expose themselves to the message of consumer culture more than others do. For instance, the more television they watch, the more materialistic values are reinforced. The reason is that programs and advertising generally depict a way of life well above the norm and beyond what most people can afford.

Along the same lines, Cross notes that “the home long ago was conquered by the market with mass circulation magazines, radio, TV, and other outlets for advertising domestic goods.” The result, Kasser points out, is that those whose parents succumbed to the media barrage by coming to value materialistic pursuits are more likely to adopt the same values themselves.

Some social scientists and psychologists believe that when people place a high value on materialistic goals, it is because they have feelings of insecurity. Turning to materialism in an attempt to cope, they buy into the aphorism, “When the going gets tough, the tough go shopping.”

“The product you already own is okay, but think of how much greater the satisfaction could be with something else you can buy!”

Still another answer is that the constant pursuit of satisfaction may increase the desire for even more things. As Hammerslough says, “faith in material solutions has a funny way of renewing and reproducing itself. Once you sail into the mythical land of Customer Satisfaction, where products fulfill every desire, pretty soon you notice another ship setting sail for a place where there’s the potential for even more satisfaction. The product you already own is okay, but think of how much greater the satisfaction could be with something else you can buy! It’s hard to resist the urge to hop on.”

When More Is Less 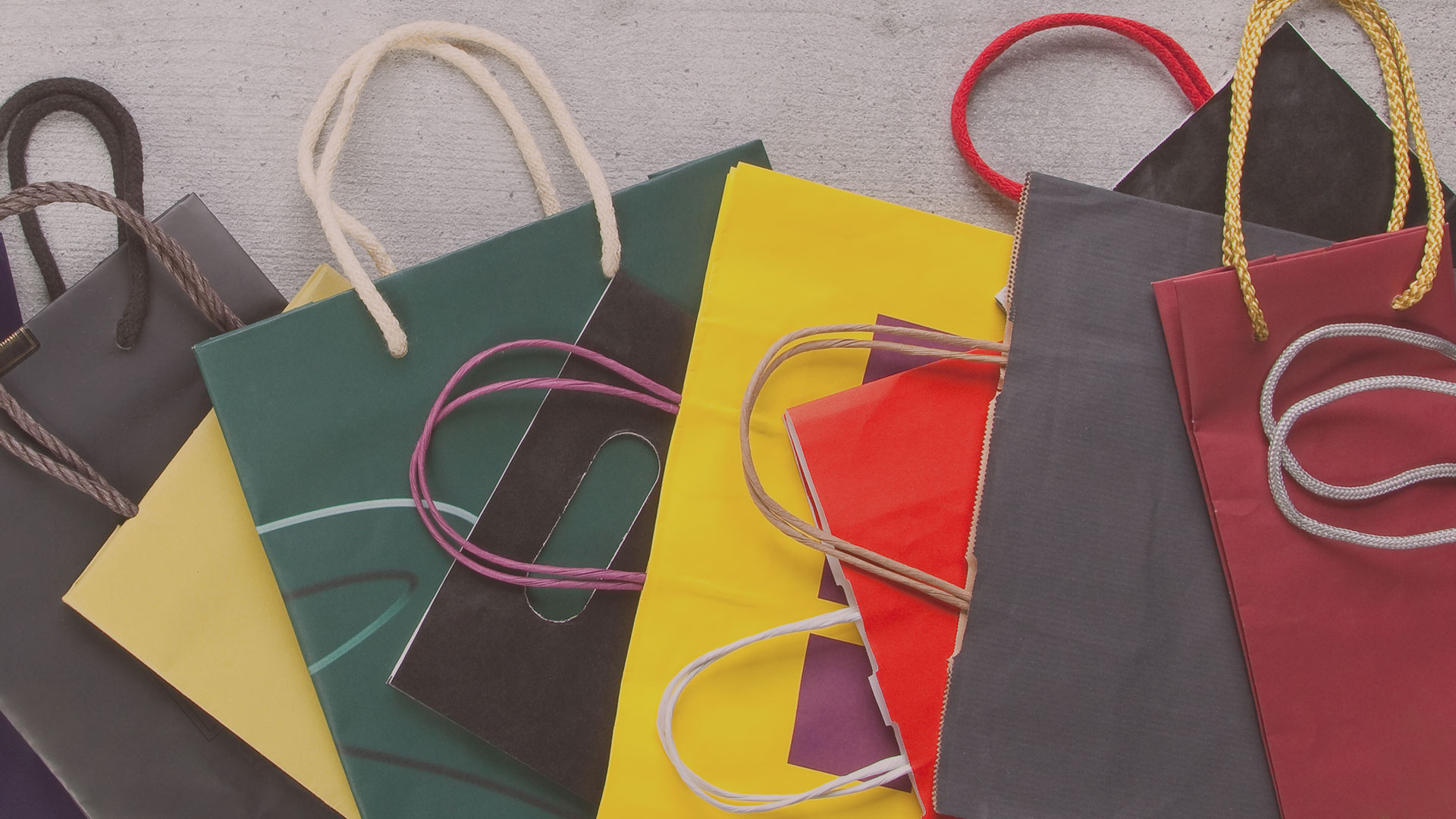 Believing that having just the right possessions will make them happy and fulfill their needs, wants and desires leads people to continue to fill their lives with things, only to find that the opposite can be true. “In this respect,” writes Kasser, “the desire for material goods, fame, and attractiveness is like drug addiction. . . . Just as an alcoholic who first got a buzz from three beers eventually requires six, and then nine, and then a whole case before feeling drunk, a person strongly oriented toward materialistic values might originally experience a ‘high’ from a small purchase or paycheck, but will eventually require more and bigger possessions and sums before the equivalent positive feelings occur. . . . Through this process, their needs for feeling good about what they have and who they are remain relatively unfulfilled.”

The reason, according to Kasser, is that all those things take up time and consume our energy, and we not only must work harder to have the things we think we cannot live without, but we must also have the resources to maintain, upgrade and insure them. Thus the possessions we amass end up adding to the stresses of life.

Kasser found that “existing scientific research on the value of materialism yields clear and consistent findings. . . . The studies document that strong materialistic values are associated with a pervasive undermining of people’s well-being, from low life satisfaction and happiness, to depression and anxiety, to physical problems such as headaches, and to personality disorders, narcissism, and antisocial behavior.”

“The studies document that strong materialistic values are associated with a pervasive undermining of people’s well-being.”

This unhappiness can in turn cause more materialism. When we get into the habit of buying things to make us feel better or more secure, we are more likely to listen to the advertisers’ messages that buying their products will enhance our self-esteem and make us more deserving of others’ attention and affections. This fuels the fires of possession obsession, while the feelings of inadequacy persist.

The Limits of Well-Being

If one lives in a modern, affluent nation, is it wrong to take advantage of the material things that are available? Are we being materialistic if we have a nice home, a reliable car, and modern conveniences such as televisions, cell phones and computers?

Owning certain possessions can enhance our lives and contribute to our comfort and well-being. But there is a very real danger in placing the emphasis in life on accumulating physical things. All of these authors agree: Mass consumerism is neither self-satisfying nor self-sustainable. There are both personal and environmental costs to pay.

Cross concludes that “much can be done at the margins of consumer society by setting rational limits to a system that naturally has no limits. . . . There is no single analysis or answer, but a challenge of the twenty-first century will be to find ways to control the overpowering success of our past all-consuming century.”

Such control must begin on the personal level. An inordinate desire or craving for possessions can lead to an attitude of never really being satisfied with what we have. We can become consumed with covetousness and lose sight of what is really important in life.

King Solomon of ancient Israel had it all: gardens and orchards; servants, herds and flocks; and much gold and silver. He said: “Whatever my eyes desired I did not keep from them. I did not withhold my heart from any pleasure” (Ecclesiastes 2:10). Yet in spite of all that he amassed, Solomon concluded that “whoever loves money never has money enough; whoever loves wealth is never satisfied with his income. This too is meaningless” (Ecclesiastes 5:10, New International Version).

As the ancient Chinese philosopher Lao-tzu said, “He who knows that enough is enough will always have enough.”