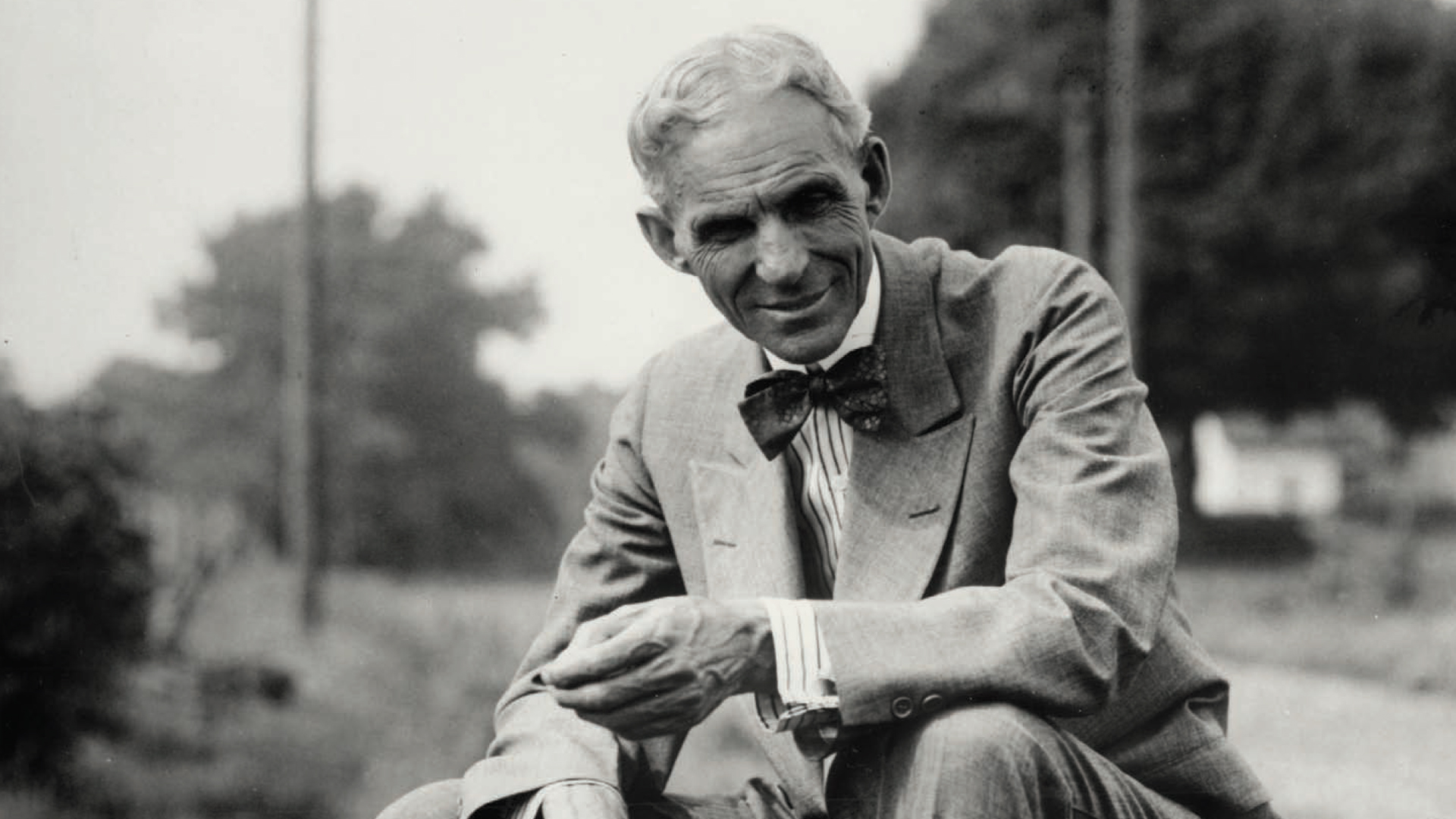 Arriving in the world three weeks after the Battle of Gettysburg, on July 30, 1863, Henry Ford never took to the rural life he was born into. His father had a prosperous farm near Dearborn, Michigan, but young Henry was more interested in mechanics—how things worked. He wrote of his childhood: “Even when I was very young I suspected much [farm work] might somehow be done in a better way. That is what took me into mechanics—although my mother always said I was a born mechanic.” From the age of 12 he became interested in watches, taking them apart and reassembling them. Soon friends and neighbors were asking him to repair their watches.

At 16 Ford left the farm to develop his skills, taking an apprenticeship as a machinist in Detroit. He would often switch jobs, however, when he felt he could learn more in another position. Ford learned by careful observation and by trial and error.

He briefly returned to the farm and in 1888 married Clara Bryant. Clara trusted Henry so completely that he referred to her as “the Believer.” After three years they moved back to Detroit so he could take a job as an engineer for the Edison Illuminating Company. While there he hand-built his first gasoline engine and tested it in the family’s kitchen sink on Christmas Eve, 1893. From these humble beginnings grew Ford’s first car.

“The largest building difficulties that I had were in obtaining the proper materials,” he said. “The next were with tools. There had to be some adjustments and changes in details of the design, but what held me up most was that I had neither the time nor the money to search for the best material for each part” (quoted by Richard Snow in I Invented the Modern Age: The Rise of Henry Ford). Nevertheless, in the spring of 1896 he drove his first hand-built automobile, the Quadricycle, through the streets around his home in Detroit.

In 1899 he left the Edison Illuminating Company to become superintendent of his first car company, the Detroit Automobile Company. But lacking sales, the decision was made to dissolve the company after only a few months. Neither its failure, nor his unhappy departure from the second car company he founded, dimmed Ford’s vision for the future of the automobile. Throughout it all, he learned more about cars, how to run a business, and more importantly how to attract talent to make his vision a reality. His determination and success with experimental cars attracted the interest of more financial backers.

On June 16, 1903, he incorporated his third automotive company, the Ford Motor Company. Their first car was the Model A. They continued to develop variations and ran through the alphabet to the four-cylinder Model N, a $600 car that in 1907 earned distinction as the best-selling car in the country. But it wasn’t the car that Ford dreamed of. His dream was to build an inexpensive everyman’s car. That car was to be the Model T.

The Model T was introduced on October 1, 1908. It was a triumph of innovation, from the cylinders cast from a single block of metal to the placement of the steering wheel on the left instead of the right.

“If it hadn’t been for Henry Ford’s drive to create a mass market for cars, America wouldn’t have a middle class today.”

It’s hard to imagine the impact that affordable automobiles had on the general population. Once-constrained farmers were able to make trips beyond the 10 or so miles their horses could readily go in a day. When not using the Model T (or Tin Lizzie, as it came to be known) as transportation, a farmer could attach a belt to one of the drive wheels to power a saw or run a thresher.

Still, it was the Model T’s transportation value that had the greatest impact on 20th-century America. Snow writes that “in 1915 [the company magazine] Ford Times declared, ‘Best of all,’ the Model T ‘has remodeled the social life of the country.’ In a decade, the Model T broke the age-old isolation of the farm. The recipients of this new freedom appreciated their benefactor, trusted him, called him by his first name. ‘You know, Henry,’ wrote a Georgia farmwife in 1918, ‘your car lifted us out of the mud. It brought joy to our lives. We loved every rattle in its bones.’”

Of course, to remodel the social life of the country, the Model T needed to be produced in vast numbers. Ford didn’t invent the assembly line, but he believed in it. He encouraged its development every step of the way. And when the workers began to hate the ceaseless, repetitive work, he approved the five-dollar, eight-hour workday. The business establishment was against it, but the workers loved it. And Ford’s reputation grew to mythic proportions.

Management guru Peter Drucker wrote in Management, “Ford’s action transformed American industrial society. It established the American workingman as fundamentally middle class.” Snow adds, “That was the destination toward which all those assembly lines had been moving, the final logic of mass production: mass consumption; the middle class; the modern age.”

Eventually Ford grew tired of what he saw as interference from other stockholders, so he bought them all out and named his son Edsel as president of what was quickly becoming the world’s largest automobile company. Unfortunately it was still Henry who was in charge. When Edsel and other Ford executives told him that it was time for a new model, Henry would not listen. As sales began to decline, however, he had no choice but to introduce the new Model A in 1927.

More models would follow. And in 1932, at age 68, Ford introduced the V8 engine. Still, it wasn’t enough to get the company back on track. As the decade progressed, Ford Motor Company slid to third place among American auto manufacturers, behind General Motors and Chrysler.

When Edsel died of cancer in 1943 at the age of 49, the 79-year-old mentally ailing patriarch stepped back into the office of president. Two years later, at the insistence of his concerned wife and daughter-in-law, Henry reluctantly surrendered control of the company to Edsel’s eldest son, Henry II, with the authority to turn it around.

“The people’s tycoon” finally retired to his Dearborn estate, Fair Lane; he died there in April 1947 at the age of 83. A later Ford Motor Company president, Lee Iacocca, writes: “The fact is, there probably couldn’t be a Henry Ford in today’s world. Business is too collegial. One hundred years ago, business was done by virtual dictators—men laden with riches and so much power they could take over a country if they wanted to. That’s not acceptable anymore.”

The times Ford was born into and his impact on them convinced him of the superiority of his own intuition. He developed the problem that haunts many successful leaders: self-delusion. He believed what he wanted to believe and was certain that he always knew best.

Harvard professor Richard S. Tedlow observes in Giants of Enterprise, “If Henry Ford had died in February of 1914, after the announcement of the five-dollar day, he would be remembered almost without qualification as a man of true greatness. His flaws were noticeable in his first half century of life, but they would have been forgotten. . . . As his wealth grew and his fame engulfed the whole world, he lost all perspective. No life better exemplifies the derangement of power.”

His defiant, tenacious and compulsive nature accounts for his early successes. His car for the masses would not have materialized without his inner strength. But it didn’t leave much room for introspection. He was inconsistent, self-defeating and erratic in his thinking—all characteristics of those who lack self-awareness.

Quoting Anne Jardim’s The First Henry Ford, Tedlow remarks that Ford was “emotion unencumbered by conviction.” This was true of his inconsistent stand on pacifism and anti-Semitism. Tedlow explains, “What mattered was to find a cause to express his emotion, not the cause itself. It is comical that such a man spoke so much and wrote (or had written for him) so many books and articles. He could have random ‘beliefs,’ but never a coherent system of beliefs. Seen in this light, his endless inconsistencies had a consistency about them. He was not insincere on purpose. He was, rather, a collection of shifting emotions he did not understand.”

Lacking a healthy self-awareness, Ford allowed his strengths to run amok. If he was creative, he was also irrational. If he attracted great talent, he also drove it away. If he was direct, he was also insensitive. Without a well-calibrated inner compass, he was a man of great extremes—for better and for worse.

However glaring the man’s personal incongruities became, however, they haven’t changed his overall legacy: Henry Ford will always be remembered for revolutionizing factory work and, of course, for giving the world the Model T.