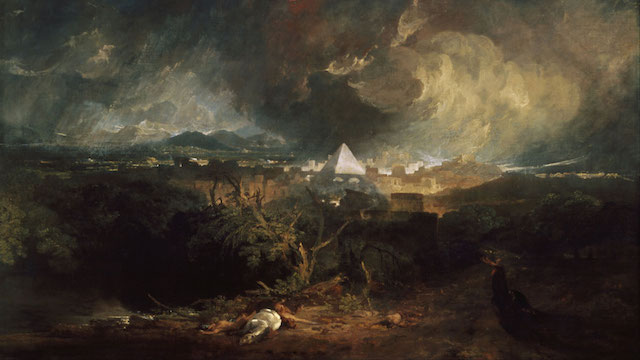 The Egyptians worshiped thousands of gods, though only about 1,500 are known by name. The Hebrew forefathers of the children of Israel, on the other hand, knew only one God. Because of this contrast, during the prelude to the Exodus their enslaved descendants in Egypt witnessed the power of the one true God over any other.

The defining of Egypt’s gods and goddesses as idols meant that Israel would stand out against all other nations in respect of whom they would worship. Eventually, once they reached Mount Sinai on their journey from Egypt to the Land of Promise, they would receive the Ten Commandments in codified form, two of which relate to other gods. The First Commandment speaks to the exclusive relationship between God and His people: “You shall have no other gods before Me” (Exodus 20:3). This prohibits a relationship with any other (foreign) god. The Second Commandment rules against creating or worshiping representations of such “gods,” whether their origin is earth, sea or sky (verses 4–5). The Israelites were not to fashion nor to prostrate themselves before such images or idols.

While the idea of idolatry was to be alien to them, by the time of the Exodus, they had lived for centuries within Egyptian society, surrounded by multiple deities. Is this why so soon after leaving Egypt under God’s hand, they easily induced even Aaron to build them a metal idol? In Moses’ absence for about six weeks as he received the Ten Commandments, we are told the people “corrupted themselves. . . . They have made for themselves a golden calf and have worshiped it” (Exodus 32:7–8, English Standard Version). Even though a festival dedicated to Yahweh followed the casting of the “molten calf” (verses 4–5, New American Standard Bible), was it the people’s ready familiarity with Egypt’s many deities that promoted this sudden lapse?

“[The Egyptians] believed in many different gods . . . and that exclusivism in religion was foolish; the wise person tried to understand and benefit from all the worship he could manage of as many gods as he could get to know.”

Because much of nature could be a manifestation of the divine, multiple gods were perhaps inevitable in Egypt’s pagan society. According to the Creator God, however, dependence on objects of worship that are copies of the created world is a futile pursuit. At the time of the liberation of the children of Israel, Yahweh made clear the difference between the worship of the creature and of the Creator. In bringing about the tenth and final plague, God said, “Against all the gods of Egypt I will execute judgment: I am the Lord” (Exodus 12:12).

By considering which of the known Egyptian gods can be related to each of the plagues, we can begin to understand how God’s judgment was accomplished. It was the Egyptians’ belief in their gods’ very existence that would be challenged. The fact that the gods could effect no change in the course of any of the plagues would demonstrate that they were nonexistent deities and that God is the only One true to His word: “I am the Lord.”

The central importance of the Nile for Egypt’s life and prosperity explains the ancient historian Herodotus’ comment, “Egypt is the gift of the Nile.” Various gods were associated with the river: Hapy was understood to be the river’s divine power; Khnum was the guardian of the Nile’s source; and Osiris was responsible for the annual flooding that brought fertile soil. Other gods were associated with the river’s fish and crocodiles. Though Pharaoh’s magicians could produce a similar bloodlike effect with water, by His intervention the God of the Hebrews was signaling those gods’ inferiority.

The goddess Heket, consort of Khnum, appeared either as a frog or as a woman with a frog’s head. She was associated with shaping the child in the womb, attending with midwives at childbirth, and fertility. Again, she could do nothing to prevent the plague.

The Hebrew word kinnim is variously translated “lice,” “gnats” or “mosquitoes.” Geb (or Seb) was god of the earth; the fact that “the dust of the earth” was turned into innumerable annoying insects would have been a great embarrassment to him, yet he was powerless to reverse the plague. Even the priests would have been affected: scrupulous cleanliness—frequent washing as well as shaving their bodies of all hair to prevent just this sort of infestation—was a prerequisite for performing their priestly duties, but it was to no avail. Thus they could not even enter the temples and plead with their gods to bring an end to the plague.

Because the Hebrew word arov appears only here in the Scriptures, the nature of this plague is uncertain. It may mean “mixture” and is thought by some to indicate a swarm of flies—possibly the anthrax-carrying dog fly found in subtropical regions. If this is correct, it could explain why the Israelites in the Mediterranean climate of the Land of Goshen were unaffected. Certainly the Egyptian gods were powerless to control the damaging swarms.

At least four gods were related to domesticated animals: the Apis bull of the god Ptah; Mnevis, sacred bull of the god Ra; the cow-headed goddess Hathor; and Khnum, the ram god. None could halt the destruction of Egypt’s livestock by infectious disease or murrain.

The lioness-headed goddess Sekhmet was both the cause of and protector from epidemics, and Imhotep was the god of medicine. Egypt’s most important goddess, Isis, was revered for her magic power to protect and heal. Yet prevention of infection and promotion of healing did not happen with this plague.

Shu and Nut were god of air and goddess of sky; neither they nor the god and goddess linked with agriculture, Osiris and Isis, could protect maturing crops from the destruction that fell uncontrolled through the atmosphere.

Similarly, Osiris and Isis were unable to turn back the ravaging locusts from devouring what remained in the fields after the devastating hail.

Several sun gods were connected with this plague: Ra, Khepre, Harakhte, Aten, Horus and Atum. The moon god, Thoth, and the sky and air deities, Nut and Shu, were all implicated in the failure to end three days of thick darkness.

Min, the god of procreation; Isis, the great mother goddess, a healer and protector, ostensibly able to bring the dead back to life; the childbirth goddess Hathor; and the sacred Apis bull, which mythology suggests was itself a firstborn—none could prevent the widespread death of firstborn humans and animals. Though Pharaoh himself was considered divine, his household was not spared: his firstborn died too.

Israel’s memory of the link between idolatry and the plagues on Egypt was short. As noted already, they soon fashioned a calf from gold. It’s interesting that God brought a plague on them for doing so (see Exodus 32:35).

When the author of the book of Hebrews reflected on Moses’ departure from Egypt in the Exodus, he noted that his faith was in the invisible God.

The Faith of Moses

“By faith Moses, when he was born, was hidden three months by his parents, because they saw he was a beautiful child; and they were not afraid of the king’s command.

“By faith Moses, when he became of age, refused to be called the son of Pharaoh’s daughter, choosing rather to suffer affliction with the people of God than to enjoy the passing pleasures of sin, esteeming the reproach of Christ greater riches than the treasures in Egypt; for he looked to the reward.

“By faith he forsook Egypt, not fearing the wrath of the king; for he endured as seeing Him who is invisible. By faith he kept the Passover and the sprinkling of blood, lest he who destroyed the firstborn should touch them.

“By faith they passed through the Red Sea as by dry land, whereas the Egyptians, attempting to do so, were drowned.”

This was in contrast to the visible gods of Egypt, whose temples, statues and depictions were everywhere. Yet those gods had achieved nothing for their followers.

The problem of worshiping and serving the creature rather than the Creator is a universal human problem. The gods and goddesses of Egypt persisted long after Israel left their slavery behind. In the Greco-Roman world of the apostle Paul, temples were dedicated to Isis and Serapis (a Greek conflation of the Egyptian gods Osiris and Apis). He wrote of the people of his time, “Professing to be wise, they became fools, and changed the glory of the incorruptible God into an image made like corruptible man—and birds and four-footed animals and creeping things” (Romans 1:22–23).

This, he said, led to a debased intellect (verse 28) and to many of the destructive characteristics we see in the modern world. He listed the following human failings: “all unrighteousness, sexual immorality, wickedness, covetousness, maliciousness; full of envy, murder, strife, deceit, evil-mindedness; they are whisperers, backbiters, haters of God, violent, proud, boasters, inventors of evil things, disobedient to parents, undiscerning, untrustworthy, unloving, unforgiving, unmerciful” (verses 29–31).

When God showed his power over the gods of Egypt, He equally demonstrated the need for all humans to recognize that idolatry leads to a corrupted mind, incapable of true godly values.