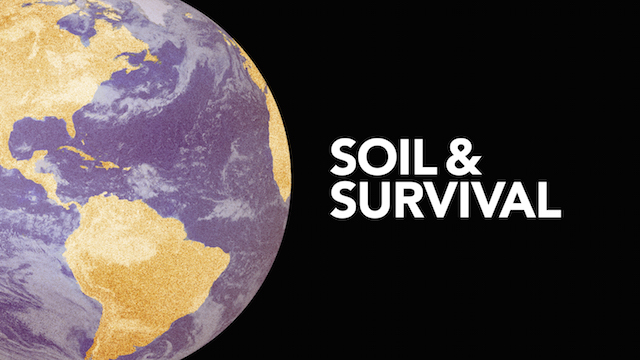 A 2007 study by Cornell University suggested that 6 out of 10 of the world’s population is malnourished, and the numbers are growing. Added to this, there are many more mouths to feed. The study said that based on present growth rates, the world population would double in just 58 years.

While global population is on the increase, available cropland for food production is shrinking. In 1960, with a global population of 3 billion, there was approximately one half hectare or one and a quarter acres of cropland available per person worldwide. The 2007 study revealed a decrease in the world’s average per capita cropland. It had dropped by half or 40 percent of the amount needed to support industrial nations’ standards. That’s to say, more mouths, less soil.

In North America conservationists and secular prophets have long warned of the perils of failing to renew and replace the soil from which comes our vital food supply. In some parts of the Midwest the depth of topsoil is remarkable. Yet due to modern farming practices, millions of tons are washing down the Mississippi annually into the muddy Gulf of Mexico. Soil is being irretrievably lost at a rate the earth simply cannot replace in any meaningful timeframe.

It comes as no surprise to learn that China’s land is suffering the effects of rapid modernization. In a study conducted between 2005 and 2013, which was kept secret until recently, 16 percent of soil and almost 20 percent of arable land in China was found to be contaminated.

Abuse of topsoil today is largely the result of industrial pollution and overuse of agricultural chemicals. Historically it was because of poor land management and harmful farming methods, including over-grazing, over-cropping, over-irrigating and failure to restore soil fertility. But many of these causes continue today in the agribusiness world where short-term profits reign supreme.

It’s been said that civilized man has marched across the face of the earth and left a desert in his footprints. According to geologist David Montgomery, the estimated rate of world soil erosion now exceeds new soil production by as much as 23 billion tons per year—an annual loss of not quite 1 percent of the world’s agricultural soil inventory. One percent per year might sound negligible, but that means in 100 years there will be little or no topsoil left. How will we continue to feed the world’s population? It’s a global problem, yet the solution is essentially local.

The Bible reveals that the land is God’s gift, a gift to humanity, and one to be treated by each person with respect and gratitude, with care and conservation. “To the Lord your God belong heaven and the heaven of heavens, the earth with all that is in it” (Deuteronomy 10:14).

Is it too late to avert this pending crisis?