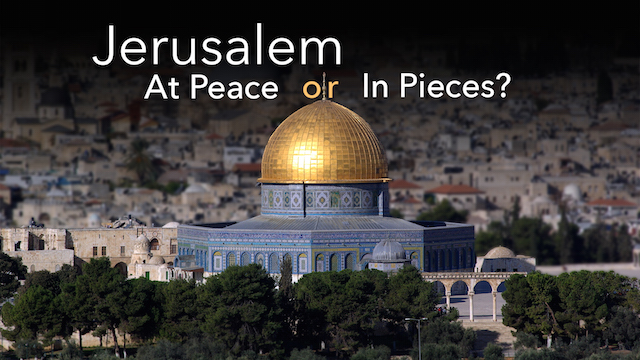 The Hebrew greeting shalom means “peace.” The Arab equivalent is salaam. Yet peace seems a distant dream in the modern Middle East. At the heart of the problem is the city of Jerusalem, both old and new. On this edition of Insight we’ll look at the broader Arab and Jewish perspectives on the city in an effort to find common ground.

Jerusalem is home to three world religions: Judaism, Christianity and Islam, bringing all the conflicting passions that religious fervor can ignite. Arabs and Jews also strongly identify with the city for historical, social and political reasons. And now, with elections looming, the Israeli government of Benjamin Netanyahu has ratcheted up the tension by continuing efforts to develop disputed land.

This is Gilo, an Israeli settlement very close to Jerusalem where more houses are being built on Palestinian land confiscated following the 1967 Arab-Israeli war.

Hagit Ofran: “These 800 new units in Gilo that were approved today are another obstacle for peace that this government continues to do—even three months before elections, trying to put more facts on the ground so that we will have [a] harder time to get to peace.”

Jerusalem is also a focal point for Muslims worldwide and is often mentioned by Islamic opponents of the state of Israel.

The recent protests in parts of the Arab world over insults to Muhammad are a manifestation of the deep feelings associated with matters of identity and ideology. Why is Jerusalem so important to the followers of Islam?

According to the Qur’an the angel Gabriel initiated Muhammad’s night journey from Mecca to Jerusalem on a mystical winged horse named Al-Buraq. On arrival, the horse was tethered in the southwest corner of the Haram. Muhammad is then said to have ascended to the seven heavens—to God’s throne—by climbing a ladder above the rock at the center of the platform. The prophet is said to have experienced the beatific vision—direct knowledge of God—and to have returned home to Mecca before dawn.

Jerusalem is also considered the first direction of prayer established by Muhammad. For the first 18 months after fleeing from their enemies in Mecca, Muhammad and his followers prayed toward the Temple Mount in reverence for its Jewish and Christian connections with God. But once the Jews and Christians of Muhammad’s acquaintance rejected him as the new prophet, his followers were required to pray toward Mecca.

In the year AD 637, the forces of Omar, the second caliph after the death of Muhammad, captured the city. Omar then traveled to Jerusalem from Syria, accepted its surrender and signed a pact with the inhabitants, assuring them of religious freedom.

According to one account, when Omar arrived in the city, he sought out the holy place, meaning the Temple Mount. What he found was a desecrated, ruined place, piled high with refuse. It had remained so throughout the entire Byzantine period. The Christians saw no religious value in the site of the Jewish temple, despising it so much that they used it as a trash dump. Omar and his Muslim troops were shocked by this disregard for the revered place and searched for the central rock where Abraham was believed to have attempted the sacrifice of his son. Finding the location under a dung hill, they cleared up the entire temple platform and cleansed the area with rose water. Omar is said to have marked out a niche for the direction of prayer, prayed to the south of the rock, and built a rudimentary mosque there, a precursor of today’s al-Aqsa.

The central rock also became a focus of attention for Abd al-Malik who built the original Dome of the Rock in the late seventh century. It’s been refurbished many times since. As with Mecca’s cubic shrine, the Kaaba, the rock is associated with Adam, the Garden of Eden, Abraham, the center of the world, and fertility. So in Muslim thought, Jerusalem replicates Mecca in certain ways. It’s believed that there the resurrection and the last judgment will take place, and the Mahdi or savior will come to the Haram, or platform.

What about the Jewish point of view? Legend names the rocky outcrop on the Temple Mount “the Stone of Foundation.” It’s said that here the universe began and Adam was created. As with Islam, the patriarch Abraham is believed to have attempted the sacrifice of his son Isaac at the same location.

The rock could also be the threshing floor that Judah’s King David bought from Araunah the Jebusite, creating (according to the Zionist view) a right to ownership superseding any Arab claim. The outcropping is also believed to be on the site of the first temple of King Solomon, the central rock serving as the altar, or perhaps the location of the sanctuary of the Holy of Holies within that temple. It’s generally accepted that the second temple also stood in the same location. Following the Roman destruction of this temple in AD 70, all that remained were the great platform and the outer retaining wall.

Jewish worshipers were banned from setting foot within the city during the second-century reign of the Roman emperor Hadrian. They could only bewail the second temple’s destruction from the nearby Mount of Olives. Succeeding generations were limited in their access, first by the Roman Christian rulers’ antipathy for what they regarded as “the murderers of Christ,” and later by Muslim control of the city.

Since at least the 12th century, Jews have come to a portion of the retaining wall, ha-Kotel ha-Ma’aravi, known also as the “Western” or “Wailing Wall,” to pray three times a day. It’s there that they beseech God, saying, “Return in mercy to your city Jerusalem and dwell in it as you have promised; rebuild it soon, in our own days. Praised are you, O Lord, builder of Jerusalem.”

The city has been mentioned by Jewish people over the centuries every day, every Sabbath, every holy day, in rites and prayers, over meals and marriages, births and comings of age and deaths. The Israeli author Amos Elon says, “Nothing remotely like this sentiment surfaced among any other exiled people or lasted so long.”

When Israel came into possession of the Western Wall in the 1967 war, Jewish identification with Jerusalem was expressed even more openly. Suddenly, according to Elon, the wall became “a monument in the domain of memory and of faith.”

On June 19, 1967, Israeli foreign minister Abba Eban addressed the UN General Assembly. He spoke in detail about the origins of the war and its outcome. With respect to Jerusalem, he said, “In our nation’s long history there have been few hours more intensely moving than the hour of our reunion with the Western Wall. A people had come back to the cradle of its birth. It had renewed its link with the mystery of its origin and continuity. How long and deep are the memories which that reunion evokes.”

Since then, the wall has become a national icon for most Israelis, the location of civil and national ceremonies, concerts, and the swearing in of elite army units. Revering the wall, the Temple Mount and historic Jerusalem is for most Israelis not a matter of practicing the Jewish religion but rather an essential aspect of national identity rooted in the history and religious tradition of the Jewish people.

So is there a way to reconcile these positions on Jerusalem—Israeli and Palestinian, Jew and Arab? I’ve spoken at length with people on all sides. Some would say, “No, there is no resolution.” Others are more moderate, optimistic and reasonable, despite all that has happened.

The answer seems to me to be rooted in a concept that is found in both Hebrew and Arabic, just as shalom or salaam or peace is common to both. The word in Hebrew is teshuvah, in Arabic tawbah. It means “repentance,” turning around and going the other way. In terms of religious practice it means changing wrong human ways to God’s ways.

The three major religions in the Middle East all believe in repentance before God. But few people are talking about this as it applies to the Israeli-Palestinian conflict. Yet it is the answer. Both sides need to find God’s resolution through returning to His values. Here it is from the Hebrew prophet Micah: “He has told you, O man, what is good; and what does the Lord require of you but to do justice, and to love kindness, and to walk humbly with your God” (Micah 6:8).

This applies to all involved in this conflict. True peace requires a profound change of heart.