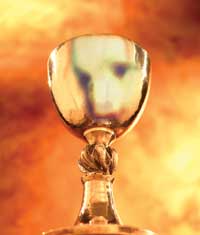 Mary Magdalene has gained increasing notoriety in recent times. Vision contributor David Lloyd interviews scholar and author Susan Haskins on the subject of this relatively minor character from the pages of the New Testament.

DL What first interested you in researching Mary Magdalene?

SH I was raised as a Catholic. I remember a picture in my convent school of Mary Magdalene at the foot of the cross, weeping, with long golden hair. I asked the nun-teacher why Mary Magdalene was weeping, and she said, “For her sins and for those of mankind.” I asked what her sins were, and she replied, “Of the flesh.” When I asked what “sins of the flesh” were, she stiffly replied, “You’ll understand when you are older.”

Later, at university, I studied art history and English literature. Mary Magdalene featured in some of the art, often naked and “weeping for her sins.” Eventually I became so interested in Mary Magdalene that I studied her history and image from the Gospels onwards, looking into interpretations of her through the ages—originally for a Ph.D., but I turned the work into my book Mary Magdalen: Myth and Metaphor, which was first published in 1993 in Britain and has just been re-released.

DL Do you give any credence to the reconstruction of Mary by some feminist writers as an Eastern priestess, the consort/wife of Christ, the leader of the early Church?

SH I don’t see her as an Eastern priestess or literal consort of Christ. She is described as a “consort” or “companion” of Christ in Gnostic writings, but this could very well be a metaphor describing her as a very close and important disciple, or for the relationship between Christ and the Church. Certain of the Gnostic gospels portray her as a leader, as an intercessor to the disciples for Christ’s sayings in those writings. She has the important role of being the conduit and interpreter of Christ’s sayings.

DL Mary’s testimony—as the first and, later, joint witness of the resurrected Christ—is of unquestionable importance in the resurrection narrative. Yet, after the record and witness of her experience at this critical moment, she disappears entirely from view—having apparently no further part to play—at least in the canonical books. Why do you think this was?

SH There are two possibilities. First, did anything about her disappear in third-century edits of what became the canonical Bible? Secondly, perhaps her role was indeed concluded around the resurrection of Christ, and her delivery of “the Good News.”

DL You mention that Mary Magdalene can be seen as “the Christian goddess” and that she fits in with various goddesses of other religious systems; e.g., Sumerian and Egyptian. Many have seen the emergence of the cult of the Virgin Mary in a similar light. Is there more than one Queen of Heaven or Christian goddess, or are the two Marys—or their devotees—in competition?

SH Mary Magdalene is certainly held in the highest regard by many people around the world, and her role is seen as an active model for women. She was instrumental in the initial vitalization of a new religion. By “goddess” I mean that the Gnostic interpretations of her took their feminine models in beliefs that preexisted Christianity. Her seeking of Christ in the tomb, and finding him, follows the Isis-Osiris, Orpheus and Eurydice stories of resurrection. And she is seen as a Wisdom figure, “the Spirit of Wisdom” (this is Dan Brown’s Sophie figure!). But the goddess figure was expunged in monotheism, except for the figure of the Virgin Mary. There is no competition between the Virgin and Mary Magdalene since the Virgin is the mother of Christ/God, and until recently her humble, virginal role governed women’s lives. But as the active model that Mary Magdalene now is for women, both in the church and outside it, perhaps the term “figurehead” would be more suitable.

DL In your book you describe the industry in mythmaking and fraud that arose in medieval times, particularly in France around alleged relics of Mary and the pilgrimages these inspired. How have these myths and legends colored our present-day perceptions of Mary?

SH Well, outdated medieval notions certainly continue to color our perceptions of Mary. For instance, the book Holy Blood, Holy Grail initiated a rather specious cult of the French medieval Mary Magdalene legends. The story that she might have had a child by Christ is not medieval—it may have originated in Holy Blood, Holy Grail, based on nothing but hot air!

DL You’ve previously mentioned that some scholars and writers see the fraught relationship between Mary and Peter, at least as depicted in the Gnostic Gospel of Philip, as being an allegory of a struggle between two rival concepts of the early Church. Would you elaborate on this?

SH It might be that some of the Gnostic gospels that relate Mary’s words are in fact describing what she is said to have spoken while in a trance. The church sought to control belief and revelation as coming from the successors to Peter (i.e., the pope and male hierarchy) and rejected “inner vision,” the kind of revelation received by the Gnostic figure of Mary Magdalene. In Gnostic thinking, a woman had to “become a man” to be a conduit [for revelation]. This is totally nonfeminist—since “spiritual” was equated with “male” and “flesh” equated with “female” in Gnostic thinking.

I concur with the views of scholars such as Elaine Pagels, who see the relationship between Mary Magdalene and Christ—conveyed in some of the Gnostic writings as an area of conflict between Peter and Mary—as allegorical rather than actual.

DL The phenomenally successful Da Vinci Code novel presents some sensational claims as historical or archaeological facts. It is itself partly inspired by equally sensational claims in books such as Holy Blood, Holy Grail and The Woman with the Alabaster Jar: Mary Magdalene and the Holy Grail. How does such sensationalizing affect the work and impact of more serious, conservative scholarship?

SH We have to stay separate from what is very clearly a work of fiction. I was quite appalled to witness, while involved in filming in Provence, the sight of large groups of American women touring the area who were obviously deeply into spurious elements of the legend of Mary Magdalene. There is a whole Mary Magdalene industry created on totally fictitious medieval myths (in the Middle Ages, churches claimed to have saints’ relics in order to bring pilgrims to their churches, in order to enrich themselves and their churches), and it has been further inflated by such books as Holy Blood, Holy Grail and various conspiracy theories. The United States is particularly inclined toward conspiracy theories. I can see that the suppression of the female in the church could be seen as a conspiracy, but it should be seen rather as political. But the rest of the conspiracy theories that inform The Da Vinci Code are total fiction.

The popularization of Mary Magdalene is testified to by the appearance of an average of three books about her a year for the past decade, not to mention dozens of articles, and people doing Ph.D.s, films, television programs, etc., on her. She has also hit a nerve or point of interest among religious fundamentalists.

DL It’s been just over 10 years since your book Mary Magdalen: Myth and Metaphor was first released, and its re-release is very timely considering the greatly increased interest in Mary. What are the main things you have learned on the subject over that decade, and if you were to write a follow-up, what points would you additionally want to cover?

SH I am working on a second edition. I have researched more about how Mary has been perceived and valued by women in the past. I also need to take account of reflections by other writers. But overall I don’t think I will be saying very much that is different to my current book. I just find it fascinating that there is this extraordinary interest in her, but perhaps people are just finding the same things fascinating that I did.