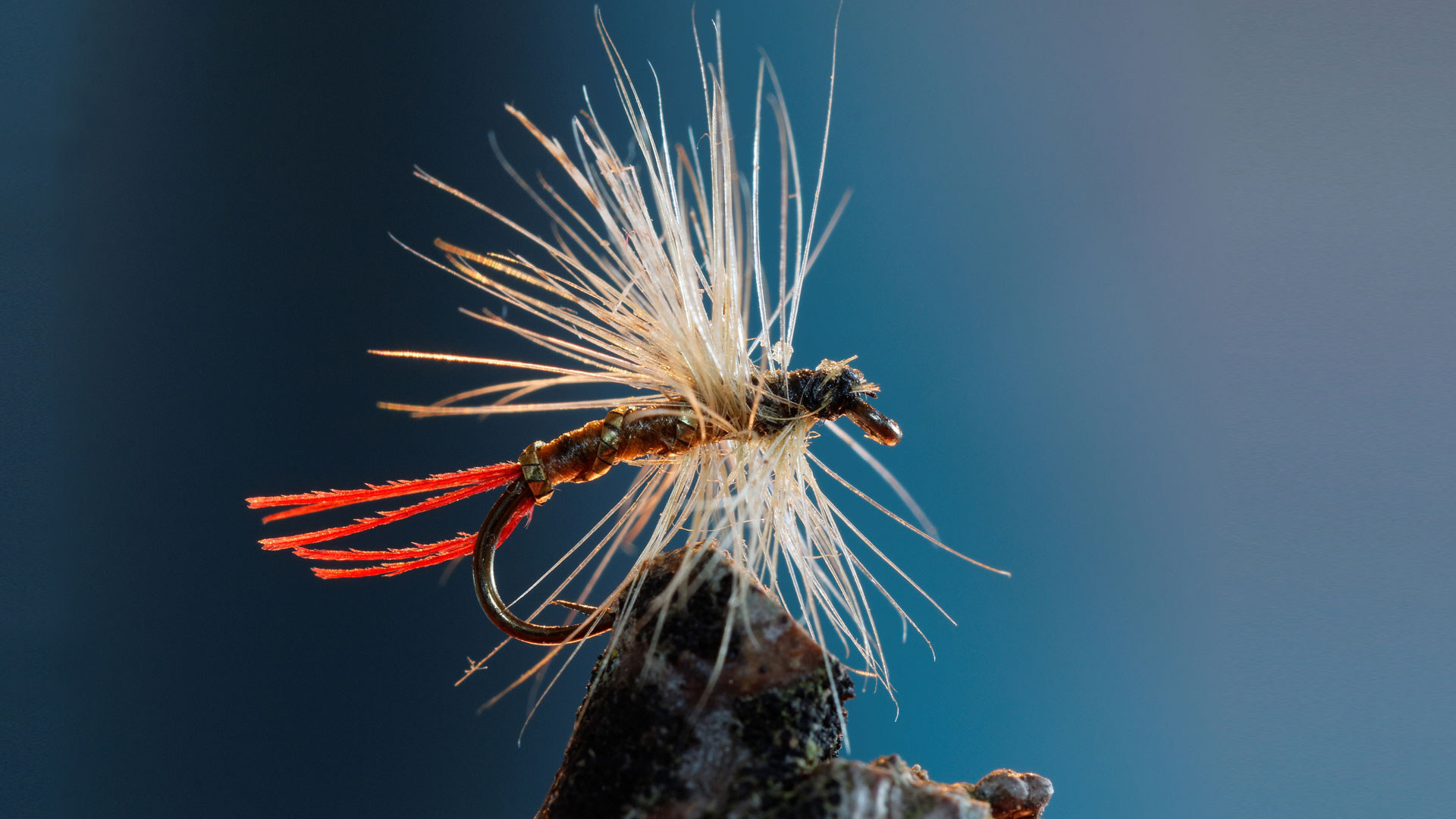 When you think of outdoor sports, fly-fishing may not be the first one that comes to mind. It’s becoming increasingly popular, however. Perhaps that’s partly because it’s a bit of a challenge; you’re never expected to get good at it. It’s one of those things that tends to be elusive.

But if you were to learn the art of fly-fishing, you might find more than a satisfying way to unwind and recharge your batteries. You might come to understand more deeply one of the most profound aspects of the world around you: the amazing interdependence of the myriad life forms—those you see and those you don’t—right down to the most minute details. Then you might well ask yourself, is it all just an accident?

Fly-fishing is certainly not the most efficient way to catch fish. Some people will tell you to use a “DuPont spinner” if you want to be efficient—DuPont was known for years as the manufacturer of dynamite. It isn’t legal for fishing, but it’s a lot less work than trying to use flies. But then, it would also be a lot easier and more efficient just to use a worm or other live bait—something that smells and tastes and looks like fish food.

The “flies” used by fly fishermen are artificial lures that attempt to mimic the natural foods the fish are feeding on at that time of the day, that week, that month, that year. Part of the fun of fly-fishing is deceiving the fish with a fly you’ve tied yourself and presented in a way that makes it look natural.

Trout are often the intended catch of the fly fisherman, maybe in part because they’re finicky. Bass are easy. They’ll take virtually anything. You can fish with wire and a bass will bite it. But trout are a lot more discerning.

To know what fly to use, one must begin to understand what insects are living in that particular stream at that time; and it varies. Hundreds of books describe the insect hatches of streams across America and around the world. People who really get into fly-fishing have a library of books on flies and insects, and they study them at length.

It really doesn’t take a lot of study, however, to become amazed at how complicated the subject can be. For example, there’s great variety within the same species of insect in two streams side by side. You may see a certain type of insect in one stream. In the next stream over, half a mile away, the insect you find may be from the same family, yet it will be a different color and a different size.

About 95 percent of the fish’s diet is aquatic insects—insects that live most of their lives in or under the water. And every day, at least three times a day, there’s a hatch. That’s breakfast, lunch and dinner for the trout and the other fish. Sometimes, depending on conditions or the time of year, there won’t be hatches that often, but there will be enough, even under the ice in winter.

Land-dwelling or terrestrial insects, like bees, ants and grasshoppers, have a very different life cycle than aquatic insects. Fly fishermen identify the stages of an aquatic insect as egg, larva, nymph, emerger, dun and spinner. The technical terms, of course, get a lot more complicated.

Most aquatic insects start as eggs, dropped by an adult female as she hovers over a stream or a lake. These eggs fall to the bottom, where over a period of days or weeks they develop into larvae and later into swimming nymphs. But some eggs don’t hatch until the following year; they will lie on the bottom for an entire season before they even get started.

Once these insects get to the nymph stage, they can live underwater for up to three years before growing to maturity. Some crawl on rocks or vegetation; some swim; some cover themselves with debris cases made of rocks and sticks and look like a hermit crab; some tunnel into the bottom mud.

Insects have an exterior hard shell, called an exoskeleton, and they have to shed this shell to grow larger, like a snake sheds its skin. This may happen several times in their life. And each time they change, they look totally different.

After one to three years underwater, the emergent-stage nymph swims to the surface, sheds its skeleton for the last time, transforms into a flying insect, then flies off to mate, lay eggs, and in most cases die that same day. When you see those insects, it’s usually the last day of their life. You may assume they’ve been around for a while, but they’ve just hatched; they’re going to fly around over the water a little bit; then they’re going to go to the shore, dry off their wings, mate in the air, drop their eggs, and die.

Different species hatch at different times on the same day, so on any one day, if you sat by the stream all day long, you’d see a succession of various insects hatching. Fly fishermen talk about “matching the hatch”; that is, matching the fly to the correct size and color of the actual insect hatching in that stream. That’s why so many of them carry so many different sizes and colors and types of flies when they’re on the water.

Some of the insects (and therefore the fisherman’s flies) will be tiny—some white, some blue, some light gray. They have names like “pale morning dun” or “pale evening dun.” During a hatch, you’ll see the flying insects, the duns; and then you’ll see the surface of the water littered with the dead insects, called spinners. They die and spin down to the surface, and they lie there with their wings outspread until a hungry fish happens along.

The next time you’re around a stream, see what’s flying over it, and realize that that’s probably hatching right now. But don’t stop there, because there’s something more going on, and it’s fascinating to contemplate.

This is just a small example of the complexity of God’s creation. Not only must the trout have plentiful and dependable food every day of the year, even under the ice of northern lakes and streams, but the insects they feed on must have their own food supply, and so on—layer upon layer, throughout the creation, from the smallest microbe to the largest land or sea creature. God provides the needs of every creature, every day of the year.

We humans usually understand only our layer—things that affect us.

It’s somewhat reminiscent of a game called three-dimensional chess. Many people have played chess, or have at least tried. Chess is a good game. Now make it a little more complicated and stack three chess boards high, separated by legs. You not only play the regular game, but you can jump up and down between the boards and affect the other layers, so all three games are intermixed, and all three games affect each other, which, of course, makes it a lot more difficult.

That’s something like God’s creation. God’s creation has many, many more layers than that, and every layer affects every other layer. Right now, for instance, you have creatures crawling on your skin. They’re so tiny that the pores of your skin look like the Grand Canyon to them. You can’t wash them off; they’re there. And they’re there to protect your skin from invaders—from other bacteria and things that would bother you. God put them on all of us, and we didn’t discover them until electron microscopes finally got powerful enough to see them. Later we learned that they had creatures crawling on them, protecting them. An amazing creation. And everything works interactively. Everything is there with its own needs, but it affects everything else around it, helping and working with the other layers and providing what they need. It’s all finely coordinated.

The smallest building blocks we know of are atoms and subatomic particles. The largest forms we know of are star systems and galaxies. But in our industrialized and educated world, we are usually so insulated, so separated from God’s creation, that we don’t see anything but what we’ve built. We don’t have any real idea about how things work. Most of us would be totally lost if we couldn’t go to the grocery store to buy our food. Our grandparents farmed or gardened, but we don’t want to be bothered. We live in cities that we created and that artificially insulate us from God’s creation. We don’t want wind in our hair. We don’t want cool or heat. We don’t want rain. We don’t want to be bothered by (fill in the blank). So we camp in Holiday Inns and don’t go out in God’s creation. As a result, we’ve lost contact; we’ve lost knowledge.

In our industrialized and educated world, we are usually so insulated, so separated from God’s creation, that we don’t see anything but what we’ve built.

Isn’t it time we knew more about that intelligent Being and His purpose, not only for the world as a whole but for us? If God can take care of the trout, the bumblebees, the birds—after all, they don’t have a supermarket, and they don’t have an air conditioner—we can trust Him to take care of us.

Jesus Christ, as the Son of God, told His followers as much: “Therefore I say to you, do not worry about your life, what you will eat or what you will drink; nor about your body, what you will put on. Is not life more than food and the body more than clothing? Look at the birds of the air, for they neither sow nor reap nor gather into barns; yet your heavenly Father feeds them. Are you not of more value than they?” These encouraging words are found in Matthew 6:25–26.

The Bible is the written Word of the Creator. In it we are also told that we can understand God better by observing His handiwork. But because we’ve distanced ourselves from that creation, too often we don’t see it. Too often we don’t understand it. We don’t get the point that God wants us to get.

God placed us within His creation, which speaks of Him—“even His eternal power and Godhead,” the fact that He is God, that He has power over everything—“so that they are without excuse” (verse 20).

The Creator has made it possible for humanity to embark on an amazing journey of discovery regarding who He is. Who would have thought that a quiet pastime like fly-fishing could provide a starting point?