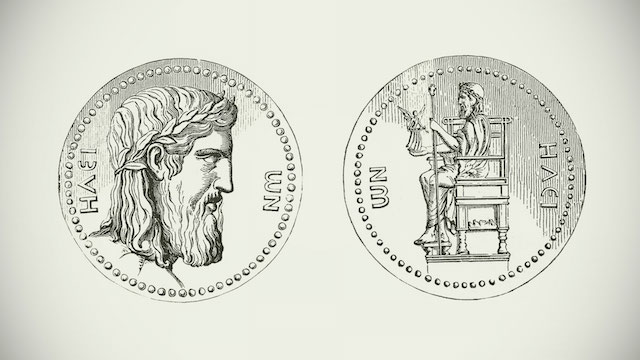 The course of the imperial cult from the death of Trajan (117 C.E.) to the coming of the first ostensibly Christian emperor, Constantine (312–337), was marked by sporadic persecution of those subjects who would not participate in emperor worship—particularly Jews and followers of Christ. Though they were not to be sought out at first, they could be punished if others brought complaints against them. During this period several emperors perpetuated the imperial cult:

Hadrian (117–138) was often associated with the father of the Greek gods, Zeus. A lover of all things Greek, he completed the temple of the Olympian Zeus in Athens at the city’s request and was initiated into the Greek mystery religion at Eleusis. Temples and statues celebrated Hadrian, and he was portrayed on coins as divine. Not only did he permit his own worship, he deified his young Egyptian companion Antinous upon the latter’s untimely death.

Antoninus Pius (138–161) received the name “Pius” for his act of persuading the Senate to deify Hadrian. Antoninus himself was generally passive toward Christianity. Still, when Polycarp (a disciple of the apostle John and bishop of Smyrna) refused to say to a proconsul “Caesar is lord” and offer incense to the emperor’s statue, he was burned to death. After his own death, Antoninus was deified.

Marcus Aurelius (161–180) was a philosopher of the Stoic school. Although he did not actively persecute Christian opponents of emperor worship, their execution was permitted under his rule. Following his death he, too, was deified.

Commodus (180–192) is remembered by historians as a corrupt and cruel man in the mode of Caligula, Nero and Domitian. He demanded divine honors. According to the third-century Roman historian Dio Cassius, he was publicly recognized with a large gold statue. Under Commodus, 12 Christians in North Africa, known to posterity as the Scillitan Martyrs, were beheaded for not swearing their loyalty to him. When a distinguished Roman citizen (perhaps a senator) named Apollonius similarly refused, on the grounds of Christian conscience, to sacrifice to the emperor’s image or acknowledge him as “lord Commodus the emperor,” he was also beheaded. Commodus seems ultimately to have gone insane, believing that he was the god Hercules and both fighting and dressing as a gladiator. He was murdered and his memory reviled by the Senate.

Septimius Severus (193–211), like most other Roman emperors, was known by the divine title “lord.” His wife, Julia Domna, was the daughter of a priest of the cult of the sun at Emesa in Syria and became part of the imperial cult by marriage. Both she and the emperor were deified after their deaths.

Marcus Aurelius Antoninus Caesar (211–217), also known as Caracalla, was one of the most violent Roman rulers. His other nickname, Tarautas, came from a particularly ugly and bloodthirsty gladiator of the time, whom he resembled. Though he tolerated the Jews and the Christians, as a ruler he is said to have considered himself a god and the son or brother of his favorite deity, the Greco-Egyptian sun god Sarapis. He is the only Roman emperor depicted in statue as a pharaoh. His supporters forced his deification on the Senate after his death. Caracalla’s successors were Macrinus (217–218), Elagabalus (218–222)—named after a Syrian sun god, whose high priest he was—and Alexander Severus (222–235).

Decius (249–251) was responsible for restoring emperor worship and requiring all citizens to furnish certificates from a temple confirming their compliance. Whether intentional or not, his edict to this effect in 250 brought about the first empire-wide persecution of Christians. Everyone was required to sacrifice to the gods. As a result of their refusal, the bishops of Jerusalem, Antioch and Rome were among those who were killed, and many more were arrested.

Valerian (253–260) ordered the renewing of Decius’s persecutions, targeting Christian bishops, presbyters and deacons and requiring them to sacrifice to the gods. In his reign, Cyprian of Carthage and Pope Sixtus II were martyred.

Diocletian (284–305) required that he be called “lord and god” and claimed the personal protection of the Roman chief god, Jupiter. He declared himself and his co-emperor, Maximian, “sons of gods and creators of gods,” naming himself Jove/Jupiter and his colleague Hercules. Again the Christians were selected for special attention in an extremely violent persecution. In 303–304 Diocletian published four edicts. Empire-wide, any who did not offer sacrifices were either executed or given imprisonment with hard labor. When in 312 Constantine became the first emperor to espouse Christianity, it signaled the end of persecution of Christians by Roman emperors.