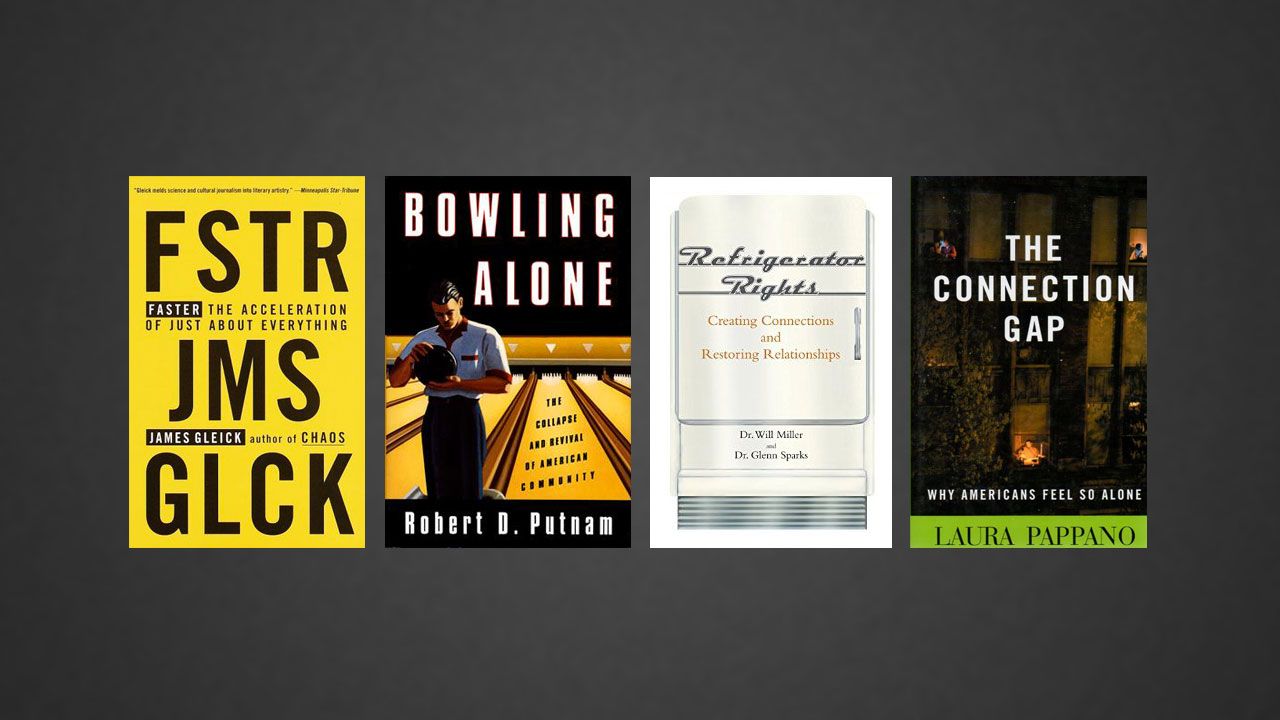 Ralph Waldo Emerson said more than 140 years ago that “friendship should be surrounded with ceremonies and respects, and not crushed into corners. Friendship requires more time than poor busy men can usually command.”

Emerson’s words still ring true today, perhaps even more than they did when he wrote them. Many of us find ourselves too pressured and too stressed out to devote much time to the cultivation of lasting relationships. After all, nearly everything in life is moving at fast-forward speed, and most of us have probably joined the rush to keep up.

In his book Faster, James Gleick explores the rapid pace of life in today’s society: we chat on cell phones; communicate through e-mail, voice mail and fax machines; screen our calls electronically; shop online; day trade on the Internet; and impatiently press the elevator close-door button. As he puts it, “a compression of time characterizes the life of the [20th] century.” We live in the “heyday of speed,” he says, where saving even nanoseconds seems important.

Along with the feeling that we must do everything faster comes the perception that we have less time in which to do it. Gleick calls it “the lose-not-a-minute anguish of our age.” However, Robert Putnam reports in Bowling Alone that between 1965 and 1995 we actually gained an average of six hours a week in added leisure time. It would seem that the faster we go, the busier we perceive ourselves to be, and the more the idea that we need to save time becomes fixed.

Gleick believes that while we say we want to save time, what we really mean is that we want to accomplish more. He reminds us that we all have the same amount of time; the real issue is how we choose to use it. In his view we have made our choices, and we’ve chosen speed because we thrive on it and we love the feeling of power it provides. “Instantaneity,” he remarks, “rules in the network and in our emotional lives: instant coffee, instant intimacy, instant replay, and instant gratification. . . . If we do not understand time, we become its victims.”

He adds, quoting Sophocles, “Time is a gentle deity.” Then he comments, “Perhaps it was, for him. These days it cracks the whip.”

Yet it appears that in this headlong rush to “save” time and do more, we are discarding what perhaps matters most in the human experience: our relationships with one another. We are becoming increasingly disconnected from family, friends and neighbors.

In their book Refrigerator Rights, Will Miller and Glenn Sparks identify three factors that have contributed to this decrease in intimate friends: increased mobility, the bombardment from media that leaves us emotionally drained, and an emphasis on individualism. The result is that fewer and fewer people in our lives have the right to walk into our homes, open the fridge and just help themselves.

The Heyday of Speed

Journalist Laura Pappano (The Connection Gap) examines the impact of the market-driven frenzy to have increasingly more. As we cut ourselves off from one another, we are surrounding ourselves with the newest and latest gadgets and material comforts.

Not only do we want these things, however; we want them now. Like Gleick, Pappano believes that “speed has become the Holy Grail. We want faster service, faster computers, faster fast food, faster athletes. The pace is so frenetic that speed that is merely linear is no longer speedy. Speed must now have bulk. It is not enough for one thing to be done fast; many things must be done fast at the same time or in such tight sequence that one nearly cuts short the next.”

Multitasking, a term coined by computer scientists in the 1960s to express the ability of a computer to perform multiple operations simultaneously, is now applied to the human machine. Because it is possible to do several things at a time, we try to cram in as much as possible. As Gleick writes, “These days it is possible to drive, eat, listen to a book, and talk on the phone, all at once, if you dare. No segment of time—not a day, not a second—can really be a zero-sum game.”

He proclaims, “If haste is the gas pedal, multitasking is overdrive. We are multitasking connoisseurs—experts in crowding, pressing, packing, and overlapping distinct activities in our all-too-finite moments.”

Along with speed has come another factor in the disconnecting of personal relationships as identified by Miller and Sparks: mobility. For many in the United States, moving from one part of the country to another, once considered distressing, has become routine. As Pappano says, “Being in transit is less traumatic: We are not as attuned, as connected, to the places we inhabit, or to the people and the history those places represent. We are on the move: Cleveland, Atlanta, Houston, Seattle, Tampa, Pittsburgh. Houses, apartments, condos change hands—and then change hands again. Moving vans and for sale signs, flip-phones and pagers, palmtops and Touchdown spaces are artifacts of a society on the go, one defined not by roots and relationships but by where we’re heading next.”

“The pace is so frenetic that speed that is merely linear is no longer speedy. Speed must now have bulk.”

In Bowling Alone, Putnam analyzes all of these trends, particularly as they relate to a major drop in civic involvement in America in the last 25 to 30 years. Using a vast array of references and statistics from government, academic and commercial sources, he concludes that four main factors have contributed to this decline: the pressures of time and money; the suburbanization of America and an attendant increase in the number of people who commute longer distances; the effects of generational change; and the electronic media, especially television.

Technological advances in general have added to the pressure to do more and to do everything faster and alone. Technology not only makes it possible, but its very presence begs us to respond. And perhaps television exerts the greatest pressure of all.

With the advent of television and all of its offspring, we have become a society of watchers. According to Putnam, television viewing increased more than 50 percent between 1950 and 1995, with the average American watching four hours a day. It appears, then, that the six hours per week gained in leisure time during roughly the same period is almost all spent watching TV. Many people flick on the tube without even knowing what they want to see and often leave it on in the background when they’re no longer watching.

Putnam’s research reveals that the increase in watching TV is directly related to a major decline in civic engagement. Simply put, the more we watch the tube, the less we participate in virtually any form of social or civic activity.

He has found that people who claim television as their main source of entertainment differ greatly from their demographic equals who say that TV is not their main entertainment. According to his research, the TV watchers volunteer less, are less active in politics, spend less time visiting or entertaining friends, write fewer letters, call friends and family less often, and send fewer greeting cards. “Nothing,” writes Putnam, “—not low education, not full-time work, not long commutes in urban agglomerations, not poverty or financial distress—is more broadly associated with civic disengagement and social disconnection than is dependence on television for entertainment.”

Miller cites Canadian writer and communications guru Marshall McLuhan (1911–1980), who proclaimed that the actual existence of television and other electronic media has had a more profound effect on us than the information conveyed by those media. Miller echoes McLuhan’s idea, suggesting by way of example that the media, which dominate the lives of so many of us, have contributed significantly to our lack of connectedness to others.

In Refrigerator Rights, he comments that “we spend hours upon hours looking at screens instead of into faces. Are we doing this because we are too alone? Or are we so alone because we spend too many hours looking at screens? It could be both. By choosing to devote so much of our life to the passive distractions of media, we have isolated ourselves from others. And, in turn, this compensates for the isolation we have unwittingly created by our mobility and our independent lifestyles characterized by striving for success.”

Because You're Worth It

Even though technological advances have contributed significantly to the problem of isolation, the emphasis on individualism in today’s society has compounded it.

Pappano believes that often we may want to connect with others and to have deep and meaningful relationships, but we want it on our own terms. “We have moved from a society in which the group was more important than the individual,” she says, “to one in which the central figure is the self. . . . From the ashes of duty we have risen to claim not merely a healthy dose of freedom but individual supremacy. . . . We want success, power, and recognition. We want to be able to buy or command caring, respect, and attention. And today so many of us feel deserving of the service and luxuries once accorded a privileged few. We may live in a more egalitarian society, but we have become puffed full of our own self-worth.”

She believes that the concept of self-sacrifice is no longer a significant part of our modern cultural makeup and is often seen as weakness, not strength. More and more people are evaluating their relationships in terms of cost-benefit analysis and weighing friendship in light of investment and return. Today, instead of considering others, people are more likely to put their own needs first and ask, “What’s in it for me?”

As a result, many are experiencing a new loneliness that stems from being overcommitted and underconnected. And increasingly we are being led into a social isolation that we barely notice. As Miller says, “little by little, isolation becomes familiar, even normal. Sadly, even loneliness becomes like the wallpaper in your room; you don’t even really notice it’s there.”

“Loneliness becomes like the wallpaper in your room; you don’t even really notice it’s there.”

A Matter of Choice

As we go about our hectic lives, many indeed are choosing to crush friendships into a corner instead of making them a valuable part of daily life. Yet, as Pappano points out, we have not arrived at this point by chance. The choices we have made or failed to make have brought us here. Perhaps it’s time to make different choices instead of just going with the flow.

Commenting that now, more than ever, the tide pulls us along, she remarks, “We must recognize that the landscape is altered. We must be responsible for digging our heels into the sand and making choices that will lead us closer to the kinds of meaningful connections that give life lasting value. In the end, we have the power to pick up the phone, to get in the car, to step on the plane. We each decide whether to be involved or merely to stand by and silently sympathize.”

Pappano concludes that while our society provides real opportunity for connection, “the choices we make and the changes we embrace—the things that make our lives more comfortable, private, efficient, convenient, and enjoyable—demand more, not less, effort from us to make that connection happen.”