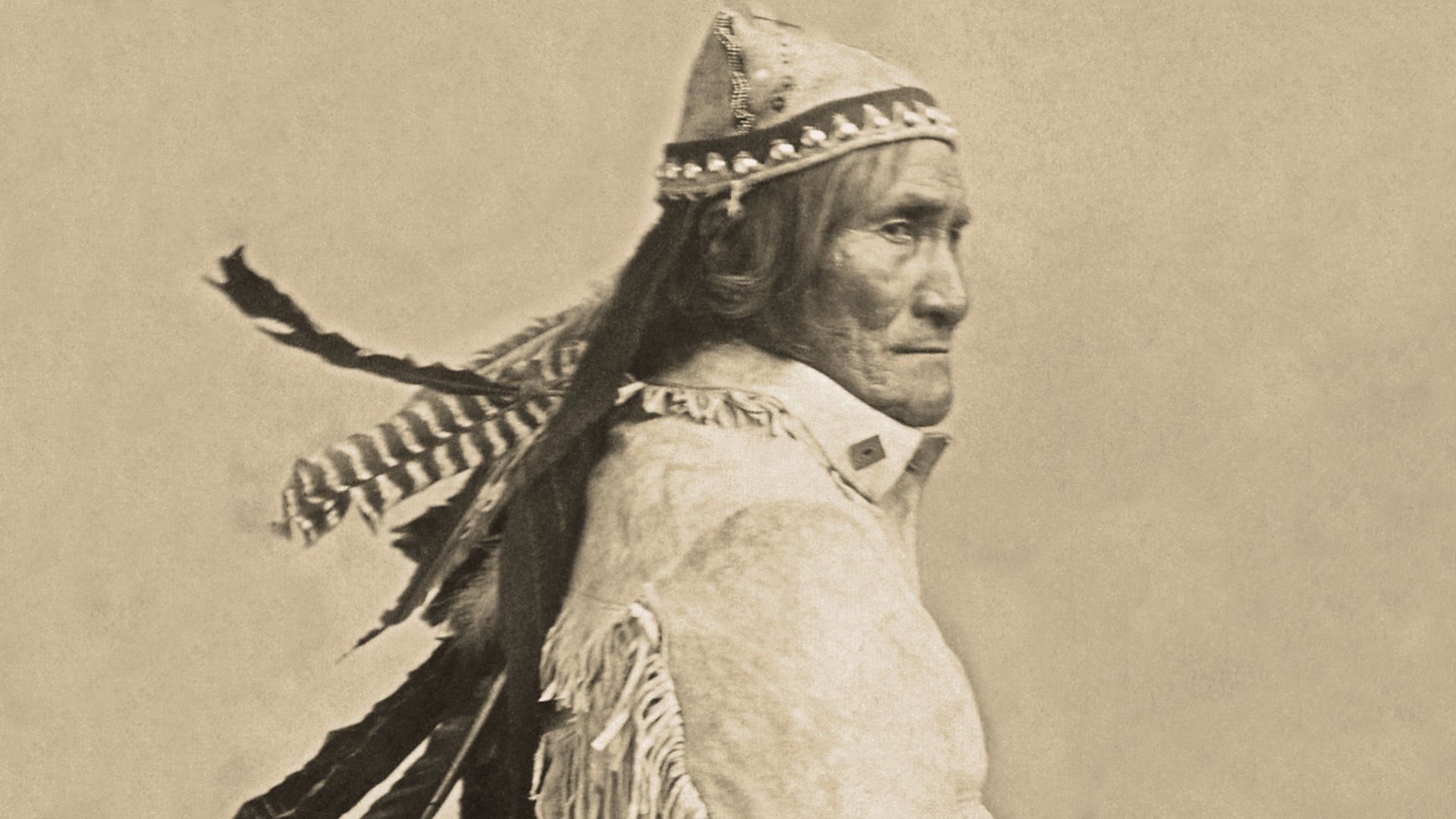 Geronimo was not the given name of this famous Apache warrior. His parents named him Goyathlay, which means “one who yawns.” A cat also yawns, but surely none of the big cats who shared his mountain home in the southwest corner of the United States and in northern Mexico employed such stealth and cunning, or were as feared, as Goyathlay.

Legend has it that Goyathlay was given the name Geronimo after leading a successful attack against a group of Mexicans, who cried out to one of their patron saints, Jerome (Geronimo in Spanish), for mercy. Goyathlay proved such a fearsome warrior that the victors called him Geronimo from that day forward.

Though other dates have been suggested, Geronimo gave his birthdate as June 1829. He was born and raised in the Gila River area of what is now the Arizona-New Mexico border in the U.S., then part of Mexico. The fourth of eight children, he was the grandson of Maco, a chief of the Nedni Apache. Geronimo never became a chief, however, as his father married a Bedonkohe Apache and joined her tribe, thereby forfeiting his hereditary right as leader.

Geronimo later said that, as a youngster, he “was warmed by the sun, rocked by the winds, and sheltered by the trees as other Indian babes” (all quotes are from Geronimo’s Story of His Life, taken down and edited by S.M. Barrett). He often played games such as hide-and-seek with his brothers and sisters, and learned to help his parents tend the crops of corn, beans, melons and pumpkins. As he grew older, he also learned to hunt, developing the skills that were to make him such a formidable opponent in later years.

At the age of 17 Geronimo was admitted to the council of warriors. He had longed to go on the warpath and serve his people in battle. Now he could do so.

Around this same time he married Alope, whom he confessed to having loved “for a long time.” Her father asked many ponies for her and Geronimo returned a few days later with an entire herd. Leaving them with his father-in-law, he claimed his bride, and with this rather perfunctory ceremony the couple was married. They had three children and seemed to have been very happy together. This was not to last, however.

During a lull in ongoing hostilities with the Mexicans, perhaps when Geronimo was in his late 20s, the tribe moved south to trade with Mexican villages. For several days the men traded peacefully in a village known to the Apaches as Kaskiyeh: each day leaving the women and children lightly guarded at their camp just outside of the town.

Upon their return one afternoon, they were met with the news that Mexican troops had attacked the camp, killing the posted warriors and many women and children. They had also taken the tribe’s ponies and arms and destroyed their supplies. Almost everyone had lost family members in this attack, “but none had lost as I had,” Geronimo recalled later, “for I had lost all”—his mother, wife and children were all dead. His father had died some years earlier.

Badly depleted in numbers as they now were (some estimate that the Bedonkohes lost almost a fourth of their women and children at Kaskiyeh), the tribe retreated north to distance themselves from further Mexican threat. This event was to prove a turning point in Geronimo’s life, kindling a determination to exact vengeance upon the Mexican troopers who had been responsible. “When he once gives his word,” Geronimo’s biographer was to write many years later, “nothing will turn him from fulfilling his promise.” And this severe loss only steeled his usual determination.

Within the year, reinforced by warriors from neighboring tribes, Geronimo was asked to lead the reprisal on Arizpe, in northern Sonora. The cold fury of their assault, carried out over two days, resulted in a great Apache victory. It was from the flames of this assault that the name Geronimo emerged.

Though other members of his tribe were now content to draw a line under the matter, Geronimo continually sought support for more attacks. He made further forays, often with only a few braves. These frequently met with defeat, but even the death of his fellow braves and the disapproval of other tribal members could not lessen his desire for revenge upon his enemy.

Other events only conspired to add to the explosive mix ignited at Kaskiyeh. The discovery of gold in California in 1848 drew more white settlers across Apache lands, which initially caused few problems. But the relative calm disintegrated in the face of a number of incidents, including the whipping of chief Mangas Coloradas by a group of miners and the seizing of Cochise and his retinue when they met with soldiers under a truce flag. “After this [latter] trouble,” Geronimo said, “all of the Indians agreed not to be friendly with the white men any more.” A quarter century of intermittent violence was thus unleashed on the southwestern corner of the country.

During this period a number of attempts were made by the Apache people, including Geronimo, to come to terms with the American people, but the tentative agreements always broke down. He did consent to live on a reservation, only to leave again “fearing treachery.” Speaking of this time Geronimo later said, “We were reckless of our lives, because we felt that every man’s hand was against us. If we returned to the reservation, we would be put in prison and killed; if we stayed in Mexico, they would continue to send soldiers to fight us; so we gave no quarter to anyone and asked no favors.”

However, with food in short supply and his little band vastly out numbered, Geronimo finally made an agreement with the Mexican troops to cease hostilities and, soon after, surrendered to General Nelson Miles. When this took place on September 4, 1886, at Skeleton Canyon, Arizona, the last Native American fighting force had formally yielded to the U.S. government.

Geronimo was taken to San Antonio, Texas, for trial. Commentators seem to be generally agreed that the prisoners’ treatment from that point on contravened the terms of Geronimo’s surrender. They were first sent to Fort Pickens, Florida, where they were consigned to hard labor, then transferred to Mount Vernon Barracks, Alabama, in 1888, where conditions were such that many died from tuberculosis and other diseases. Finally, in 1894, the prisoners were moved to Fort Sill, Oklahoma, when their traditional enemies, the Comanches, Kiowas and Kiowa-Apaches agreed to have them share their preserve. The prisoners were allowed to live there provided they stayed on the military reservation.

From that base Geronimo was given a measure of freedom. He was asked to attend the 1904 World’s Fair in St. Louis, Missouri, and President Theodore Roosevelt’s inaugural parade the next year. Of the World’s Fair, Geronimo said, “I saw many interesting things and learned much of the white people. They are a very kind and peaceful people. During all the time I was at the Fair no one tried to harm me in any way.” He also attended other expositions around this time.

Barrett states, “The St. Louis Exposition was held after he had adopted the Christian religion and had begun to try to understand our civilization.” However, his reform did not go quite far enough for the Dutch Reformed Church, as he was later expelled—some say for gambling, others say for being drunk.

Geronimo always longed to return to Arizona and appealed on many occasions for this privilege. “It is my land, my home, my fathers’ land, to which I now ask to be allowed to return,” he told Barrett. “I want to spend my last days there, and be buried among those mountains. If this could be I might die in peace.” It was not to be, however. His drinking to excess continued to be an issue and this ultimately led to his demise. Riding home drunk on a February night, he fell off his horse and lay unconscious on the cold ground until the following morning. He died of pneumonia on February 17, 1909, barely a week later.

This famous Apache was most certainly provoked in many ways by his Mexican enemies and by American and European settlers moving West, but there were those among his own people who did not appreciate Geronimo’s determination to exact revenge. Some were appalled at the brutality and savagery he displayed, even against women and children. His actions no doubt played a part in the U.S. government coming down as heavily as they did on the Apache tribes, thereby causing Geronimo’s people further hardship.

While it may be difficult to condone the terrible vengeance Geronimo wrought, in fairness, his actions must be viewed in the context of the belief system from which he sprang and the place and time in which he lived. This expanse of America earned the name “the Wild West” for many good reasons; and not all of those reasons were of native blood.

However, in Geronimo, perhaps we can also see a man who was eventually willing to change. There came a time when even he had to make peace with the Mexicans. He was able to recognize he could no longer outrun the U.S. Army. He began to see that not all white people were seeking his life. He was willing to listen to the words of a new religion. Perhaps he saw there a certain resonance with his own life: